FEATURE: Aniwords – Elements of the Pastoral in Konosuba

In which giant frogs take on deep semiotic meaning... 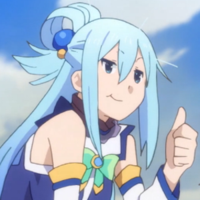 In the final minutes of the first episode of KONOSUBA -God’s blessing on this wonderful world! (hereafter referred to simply as Konosuba), recently deceased former-otaku Kazuma Satou and his companion, the goddess Aqua, whip through a minute-and-a-half long montage sequence that follows them on the glorious beginning of their heroic quest to defeat the Demon King unjustly ruling over the world they’ve so recently come to inhabit. Except… it’s not really all that glorious at all. Kazuma is working his guts out each day as a construction worker, and Aqua, just having a terrific time, is busy wowing the townspeople with her painting skills and enjoying her post-bath milk and barfing out rainbow-colored puke. It’s cute, it’s fun, and it’s slightly genre-subverting, but more than that, it introduces to Konosuba what I believe is the show’s defining characteristic.

At first glance, this may seem a strange genre label to apply to a banal anime comedy like Konosuba; after all, the pastoral is a storytelling mode with a tradition stretching back to the days of the ancient Greeks, including such monuments of literature as Milton’s Paradise Lost and Shakespeare’s As You Like It (and stretching out into numerous other mediums, such as opera, painting, poetry, and so forth). Yet Konosuba seems to apprehend, at least in bits and pieces, the same sort of pastoral mood as these classic works. Amidst all of the “unideals” that Kazuma experiences in his journey, there still remains a core of the “ideal” at the heart of it all—a peaceful openness of spirit unbroken by the saliva of giant frogs or the assaults of giant sentient cabbages. 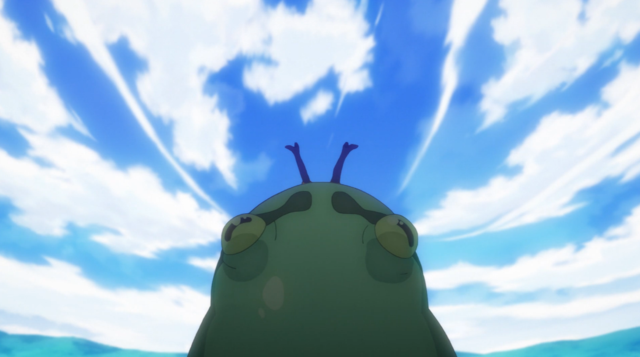 I referenced the premiere’s montage sequence because I think it’s the purest form of this idea in Konosuba. To begin from the top, the main conceit of the montage sequence is to depict Kazuma and Aqua’s mundane working lives. They get up from their beds in a stable, go to work at the construction site, bathe in the evenings, and eat (and drink) their nights away before getting up to do it all again the next day. But the montage kicks off with the image of the sun rising over the mountains and intercuts a shot of birds flying in the sky, before ending with Kazuma’s abrupt realization that they haven’t been living adventurer’s lives at all.

That, as far as I’m concerned, is exactly the point.

The classic pastoral draws upon a certain unity between an experience of nature and idealization of living a calm, satisfying life in the midst of natural beauty. Although Kazuma and Aqua are technically working in a city, this same kind of ideal is applied to their laborer’s lives. As distant as they are from their real goal, there’s a sort of odd beauty and contentedness to the lives they’re living. They aren’t out adventuring (indeed, both of them are uniquely unequipped to handle the adventurer’s life), but instead find themselves embracing a normalized existence where their joys are small things like a party with the other guild members, a good meal after a long day, a new blanket to sleep on, or a nice drink. It may not be the ideal Kazuma was expecting, but the very coziness of the life is an ideal all on its own. As poet-philosopher Friedrich Schiller said in his essay “On Naive and Sentimental Poetry,” “Dost thou step out of thine artificial circle to it, does it stand before thee in its great repose, in its naive beauty, in its childlike innocence and simplicity—then tarry beside this image, cultivate this feeling, it is worthy of thy most glorious humanity.” That is, as Kazuma realizes at the end of the montage, he and Aqua have been swept away by the naivety of a mundane life. They are not heroes, but they have found a sort of ideal nonetheless. 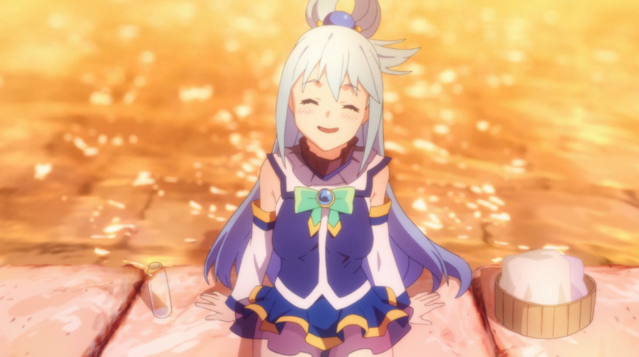 The conclusion to the premiere—bathed in soft golden light and accompanied by a soft instrumental track—is the closing touch on this ballad to an unconscious, mundane life, but even successive episodes maintain this same sort of affection for the status quo even as our heroes head for the incrementally more adventurous territory of quests, explosions, and crazy lady knights.

I don’t think it’s a coincidence that the two main quests of episodes two and three involve a going out into nature and an interaction with nature as it comes to humanity. Certainly (and despite their comedic value) the frog killing quest and the cabbage harvesting quest are drawing from the familiar stock of MMORPG kill and collect quests, but as Aqua and Kazuma (later Megumin and Darkness) adventure forth, they experience a version of nature alongside the “unideal” world of adventuring. Aqua gets eaten and slimed on, Megumin’s far from competent, and Darkness is… well, you know. But by introducing comedy into both this kind of aggressive nature and the heroic “unideal” of the party’s questing, Konosuba creates a sort of reversal, casting a new sense of pastoral idealism upon the non-adventure adventures of Kazuma and his companions. To adventure, and ultimately not really adventure at all—that is a pastoral beauty on its own.

Significantly, Konosuba also returns to the pastoral touch points of the first episode’s montage in its later episodes. In episode two, Megumin forces her way into Kazuma and Aqua’s party in a scene that repeats the sunset-drenched lighting of episode one’s ending, and she and Aqua join each other in the 2-second hair rinse shot in the baths. And episode three concludes with yet another joining, this time over a meal made of the success of the cabbage harvest and (again, despite the comedic elements) cast in a warm, friendly tone. 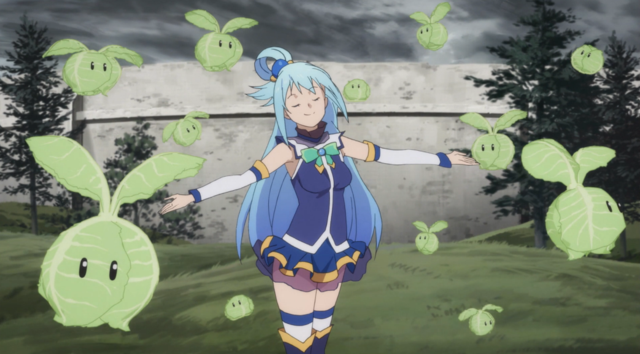 See—harmony with nature. The pastoral.

Of course, as for the rest of Konosuba, we’ve yet to see if it will continue to maintain its association with the relaxed, idlyic feel of the pastoral. For all their false-starts so far, Kazuma and Aqua do have a quest they want to complete, and that sort of forward momentum may be, I think, somewhat at odds with the wheel-spinning nature of these first three episodes. Perhaps Konosuba will actually get its plot-butt in gear in future episodes—but I kind of doubt it. And so, for my part, I’m eagerly waiting more episodes of Kazuma’s exasperated deadpans, Megumin’s once-a-day explosions, and Aqua being Aqua (sorry, not sold on Darkness yet). At the very least, Konosuba puts me in my own sort of pastoral mood, brought on by the basic fun of being around these silly characters.

It’s relaxing. It’s fun. It’s, at least for the me who loves messing around in MMOs with friends more than questing in serious, my very own sort of pastoral ideal. And I’m glad it’s here.

How have you guys been enjoying Konosuba so far? Chime in down in the comments! 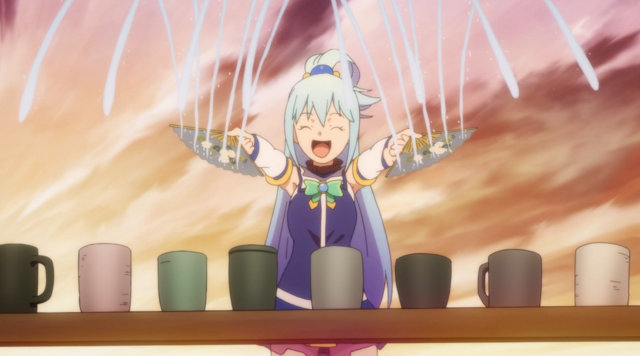