FEATURE: Aniwords – You Are the Digidestined

The past is always behind you... 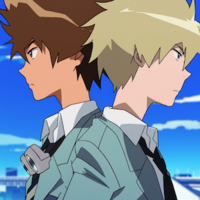 I didn’t watch Digimon growing up. Aside from the fact that I was usually busy with other things around the time the show was airing, I wasn’t much interested in these “digital monsters” because 1) I thought they were a cheap knock-off of Pokèmon and therefore obviously bad (an opinion I’ve since reneged on), and 2) I thought the monster designs were pretty shabby (an opinion I still hold). But with the second installment of Digimon Adventure tri coming up next weekend, I was suddenly seized with a strange desire to check out the first part. Against the good advice of those who advised me I should watch the original Digimon Adventure first (I did watch the first two episodes for a little bit of context), I dove in and cruised through the four episodes. And whoa! I was kind of taken aback—because Digimon Adventure tri is not only not a dripping, indulgent nostalgia fest, but it’s straight-up good because it looks towards the future instead of to the past. And, even more fascinatingly, it’s also a particularly focused theme piece that engages directly with its presumed audience.

In Digimon Adventure tri, you are the Digidestined.

Now, I said that tri doesn’t look to the past, but that doesn’t mean that it completely ignores the past. In fact, I’d argue that Adventure tri is – by nature of its very existence – in conversation with the past. Billed explicitly as a 15th anniversary project, Adventure tri’s production is a homage to the original series, a celebration of days bygone. Even though the Digimon franchise has had a TV anime as recently as 2012, there’s no denying the on the whole the best days of Digimon sleep in the distant past. And it would have been easy for Adventure tri simply to turn its back on the franchise’s ignoble present to gaze back to the early 2000s with a wistful, wishing look. But it doesn’t. It looks forward while remembering—and it calls its audience to do the same. 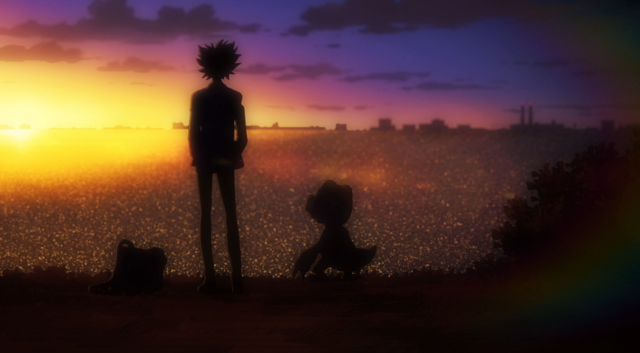 The first episode of Digimon Adventure tri is, despite the near-constant threat of something bad coming and the sudden appearance of Kuwagamon near the end of the episode, surprisingly calm, focusing almost exclusively on the current lives of the original cast of Digimon Adventure as they now live. Mentions of or even hints about the Digimon or the story of adventures in the Digital World are basically absent (aside from a few quiet shots). At the very least, Taichi and co. never explicitly bring up the past, implying that they’ve all somewhat moved on with their lives and accepted their current state. But those lingering shots speak volumes. They silently communicate a desire to return, an unspoken dissatisfaction with the way things have ended up—a feeling demonstrated in action by Taichi’s apathy towards his career planning sheet. If they’ve moved on at all, they’ve done so incompletely (or, like Joe in his desperate studying, lost that distinct characteristics that made them who they once were).

This is, if you’ll excuse my language a moment, a hella bold trick that Digimon Adventure tri attempts—and succeeds at. Even though I’m not, not really, the target audience for Adventure tri, I could easily sense the understated melancholy of the mundane created by the first episode. In the first episode of the original Digimon Adventure, the cast is literally swept away into a new and exciting world. And as a children’s anime, the design was, of course, to evoke that very sensation for its young viewers. The Digimon Adventure childhood was a vast and exciting time, a simple time for the simple pleasure of exploring the world, battling with your friends in the world, and saving the world. Digimon Adventure embodied the awe of childhood, and the thrill of it all.

But the Digidestined grew up, and so did we. 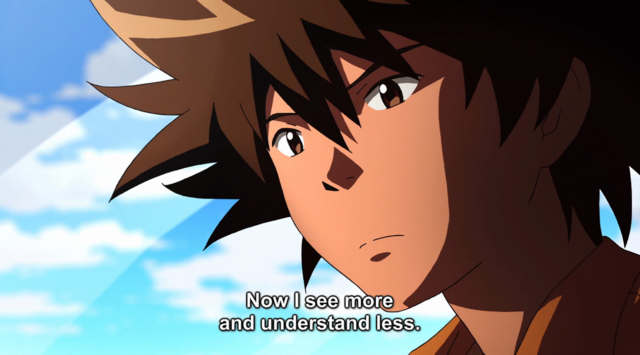 This is all really just to say that Digimon Adventure tri is deliberately, specifically targeted at those who watched Digimon Adventure as kids (or, more broadly, at those who watch it remembering equivalent experiences of childhood), living through all the wonder and all the fun—and who are now grown up, 15 years later, and seeing the world in an entirely different way. As Taichi says to Yamato (Matt) in the ferris wheel during the fourth episode, “Now I see more and understand less.” It’s a zinger of a line, and one of the most beautifully summarized statements on the experience of growing up that I’ve ever seen. In effect, the central thematic conceit of Adventure tri is to force its cast to live through the exact same feelings its target audience has gone through in the years since watching the original show. It’s simple, but marvelously cohesive and tremendously effective—even for someone like me who has no nostalgic connection to the franchise. And so as the show subtly pines for the past through passing shots of Digivices and pictures in the first episode (and outright through Yamato in the following three), it speaks to the audience, “We understand you. We know your nostalgia for the simple past, where you were a kid and could just play and watch Digimon Adventure and be happy.”

But, Adventure tri also notes, “Those days are gone, and we can’t turn our eyes away from the world as we see it now.”

By the end of the first episode, there’s still been no action, but Kuwagamon’s (the very first Digimon Taichi and co. encounter at the beginning of Adventure) appearance in the real world has set the story in motion. It’s a chaotic image of the past disrupting the present, and it’s this very dynamic that troubles Taichi even through the end of Alphamon and Omegamon’s battle (robots! finally!) at the conclusion of episode four. His flashbacks to the destruction caused by Kuwagamon (repeated almost ad nauseum) in the face of a need to act, to be the hero he once was again, overlay the past and present, and paralyze him. Even Taichi’s somewhat estranged relationships with the rest of the group (particularly Yamato) are representative of his attempts to distance himself from the past, but the circumstances of the present won’t allow him to separate entirely. 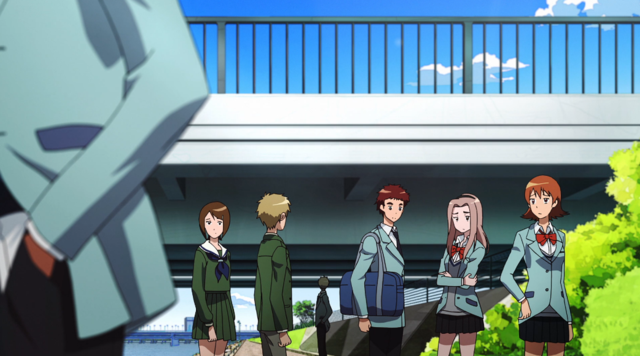 And Digimon Adventure tri really seems to be saying that Taichi’s going about this the wrong way. It’s not that he’s dumb for hesitating in the face of consequences (seeing those is just another part of growing up) or for considering his choices before acting, but his reticence to remember love for the past is crippling him in the present. They are not two distinct selves, but merely parts of the same Taichi. He’s got to be both the naive hero of the past and the self-conscious young man of the present. The answer lies somewhere in between, in between Joe’s complete distancing of himself from the group and Yamato’s inability to understand that they’re no longer kids in the digital world. Taichi must negotiate that boundary if he’s going to succeed—and he may face failure and pain on the journey.

It’s obvious from the first four episodes—appropriately titled together as “Reunion” (of past and present, one might say)—that Digimon Adventure tri doesn’t intend to be a mindless rehash of the glory days of Adventure. It embraces, looks back on the first adventure with fondness, but it doesn’t wallow in it, nor does it attempt to glamorize the devastating effects of bringing a what works as a child looks like in the real world. The show exists on the delicate intersection between memory and reality, between childhood and adulthood. We’ve got a long way to go before Adventure tri draws to a close, but I would be stunned to see it do anything less than walk that tightrope to the end, remembering with warmth that blizzard in the middle of summer camp while striding forward into the future.

And, of course, as it does so, it pulls us along with it. We are the Digidestined in our nostalgia for the past and our new awareness of the truths of the present. We are invited in. To go forward. To grow up. To save the real world this time. 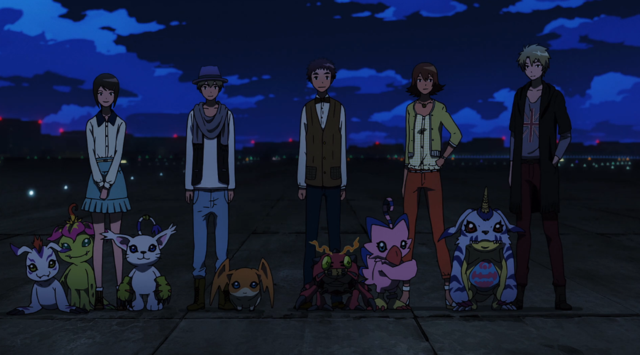