Lock your door and close the blinds! The busty girls of Senran Kagura are here again! 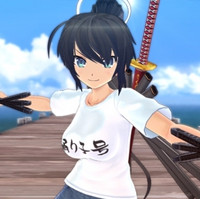 I’d like to make something clear before going any further with this review. I am not a Senran Kagura fan. Absurdly proportioned anime ninja girls fighting each other until their clothes explode in excessively gratuitous ways is not my bag, baby. Cool? OK, so just keep that in mind when I say that hey, y’know, Senran Kagura Estival Versus is actually pretty damn fun for a Dynasty Warriors clone.

Built around the considerably shallow story concept of gathering the whole Senran Kagura stable of ninja babes together for a “Shinobi Bon Dance” in an alternate dimension, Estival Versus is a 3D beat-em-up action game in the one vs. hundreds style popularized by Koei’s Dynasty Warriors series and its myriad spinoffs. Players will take control of one of the busty kunoichi protagonists and spend most of their time tearing through hordes of faceless enemies who pose little to no real threat, and occasionally facing off with other members of the main cast who put up only so much more of a fight. 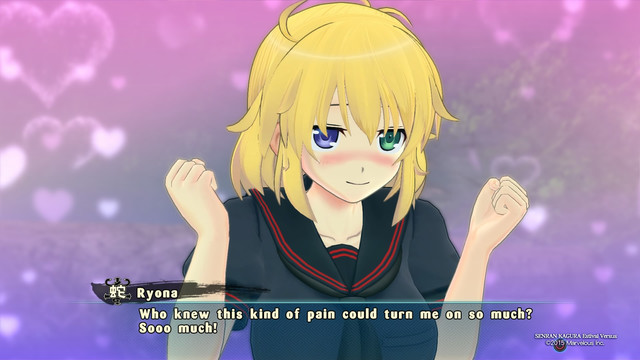 The combat of Estival Versus is surprisingly robust, but often feels hindered by stiff controls and a clunky/useless targeting system and camera. The heroines are able to perform standard attack combinations and juggles based around weak and strong attacks, cancelling their strings with a short dash to chase enemies down and really rack up the hits. There are also blocks, parries, super moves, and various ways of powering up to deliver even more damage, but most of the time the AI opponents are so harmless that doing much more than mashing one attack button is often unnecessary. I found myself frequently using Shinobi Arts and Transformations just to give my eyes something new to watch.

And watch they did!! Though the combat can be repetitive and sometimes clunky, the game is rendered in a lush anime style, and the character models look and move like sexy anime girls given 3D life should. The visuals are nothing extraordinary or groundbreaking, but this isn’t a game I can by any means call unattractive. The visuals are good stuff! 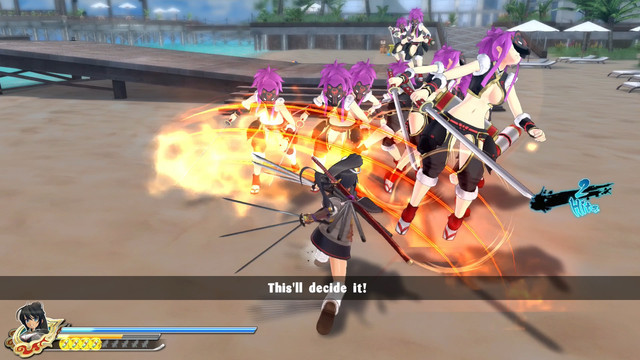 Whenever not spending time on the battlefield beaches racking up 6,000 hit combos on mindless ninja drones, players will watch the story, such that it is, play out through a mix of anime cutscenes, still images, and visual novel style sequences with in-game graphics. For what it’s worth, the story is silly and fun, giving ample screen time to most of the cast, such that if you do happen to have a favorite you’ll get to see her plenty. The story isn’t deep or complex, but it doesn’t want or need to be. This is a gratuitous beat-em-up revelling in its own silliness, and comes off all the more charming for it.

The gratuity of it all is something that can’t be ignored, and I’d think most people would know right away if Senran Kagura is for them based on where they stand in regards to ninja girls very literally having their clothes torn to shreds in the midst of a fight. Some will love this, others not so much, and hey, that’s cool! For those that dolove Senran Kagura and all its oversexed action, there’s also a “Dressing Room” mode where players can customize each and every character’s multiple outfits for use in other modes, and then pose them for pictures. I didn’t play around with making “Dioramas” very much, but the option of customizing characters with different clothes, hairstyles and accessories is fun in any game, and a more than welcome addition here. For what it’s worth, I did my best to make Homura resemble Aozaki Aoko from Melty Blood. So, uh… yeah!! It’s a pretty cool mode, okay!? 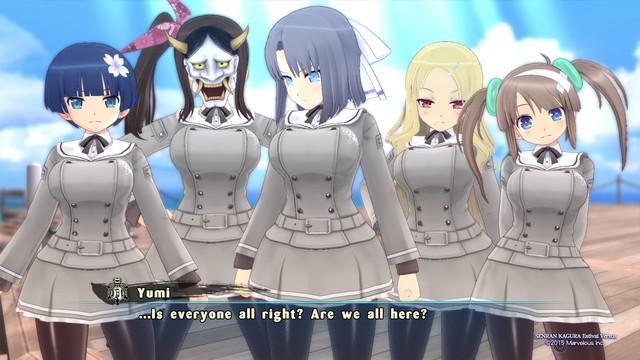 Other than one’s stance on sexy ninja high-schoolers, the fighting is easily the most important component for a game like this, and as mentioned it… certainly has potential. Some characters are very, very fun to play, and have the right blend of moves and abilities to string together some really damaging sequences that are awesome to behold. Other characters are sadly underwhelming to control… when you can control them effectively at all. Certain fighters have such pitiful ranges on their attacks that it’s hard to even hit a stationary target with relative ease, and again, the clunky camera hardly helps matters.

One thing the Dynasty Warriors games and their spinoffs do so well in their combat systems is give attacks huge, sweeping arcs and assign specific purposes to the different combinations of weak/strong attacks. X attack juggles, attack Y clears a crowd, option C breaks a boss’s guard, this one shoots a projectile. It’s never quite rocket science, or even 8th grade geography, but there’s some thought behind the attacks. Contrary to this design "ideal" are the combos present in Senran Kagura. When they hit at all (I don’t know how many times I strangely misjudged the spacing between myself and an enemy) there’s not much of a reason to do different attacks. Mash square, do your launcher, cancel with circle to chase them, mash square some more until your combo ends or you have a chance to dash cancel again. There’s potential in the speedy fighting systems in place, but not too much else. 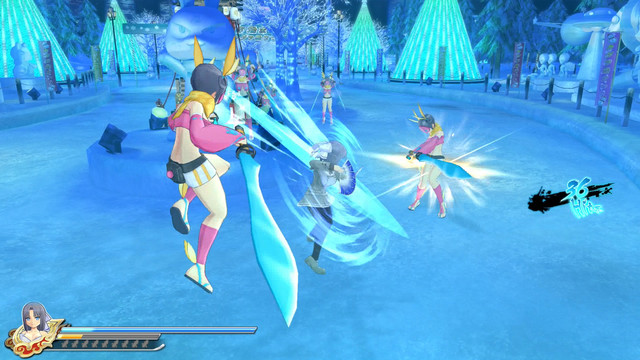 There’s honestly not a lot else to say or even ruminate over regarding Senran Kagura Estival Versus. It’s a large-scale brawler with so-so fighting mechanics, pretty anime graphics, and a gratuitously sexy cast of female ninjas that frequently strip down to their underwear while fighting. It also costs a full-price $60 at the moment; a price tag I’m not sure the content can back up, although I hear there is DLC on the way (already here!?) That said, fans of the Senran Kagura brand are sure to find exactly what they’re looking for with Estival Versus, and brawling fanatics thirsty for a new game to mindlessly punch ninjas might just find a fun way to spend a few hours with like-minded buds (up to 10 players online!?). The whole affair is kicked off with a choreographed dance number on the beach, too… so, hey, there’s that, right? 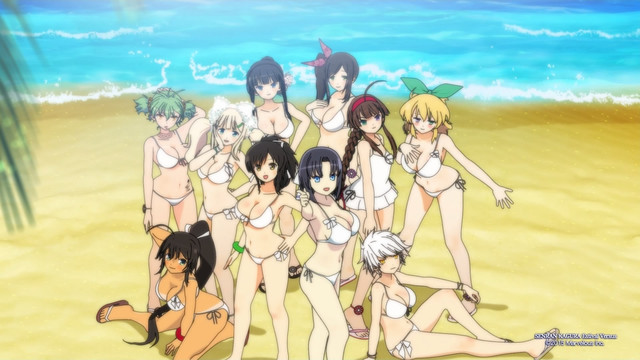 + Plenty of casual head-busting fun for as many as TEN players at once!

+/- Gameplay has the potential for depth, but stiff controls squander that same potential