EVERYONE IS SUPER SUPER CRAZY!! 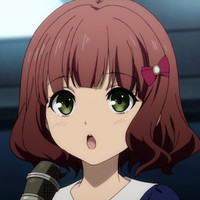 The characters of The Lost Village want to start over. Whether because they’re trying to get away from a stalker, want to escape the obligations of society, or just want to run away with their lover, each of them is coming to Nanaki Village with the intent of making a new life for themselves. One might say they’re running away, or one might simply acknowledge that life is a hard—and wanting a better life is only natural. When faced with the frustrations and challenges of being alive, when you feel like you have nothing to lose, what’s to stop you from seeking out something more than what you have? In The Lost Village, there’s nothing standing in the way of our weird crew of misfits and disgruntled citizens—they’ve been enabled (apparently by way of an online contest) to escape life as they know it and to seek a new beginning in an oasis of freedom. Heck, there’s even one character who explicitly declares herself “Eve” seeking an “Adam.”

Where The Lost Village gets interesting is in its irreverent treatment of all these characters’ desire to flee from the real world into an Eden where they can start anew. While the assorted motivations for seeking out the freedom of Nanaki Village are generally reasonable (although there are some that are less so, like, “I got sick of dealing with my friends”) and even the idea of a village isolated from the outside world seems somewhat attractive, the relentlessly tense music, the pile of names and faces and rationales that pass by, and the unsubtle foreshadowing of death on the horizon from all sides seem to trivialize by virtue of sheer volume the pathos of any individual’s specific woes. When everyone’s situation is horrible, no one’s is. Even seeming protagonist Mitsumine, who is escaping his overbearing parents, gets swept away in the torrent of unfortunate circumstances, as the reveal about his situation flows immediately into a ridiculous conversation with a girl who holds her breath to keep bad things from happening. 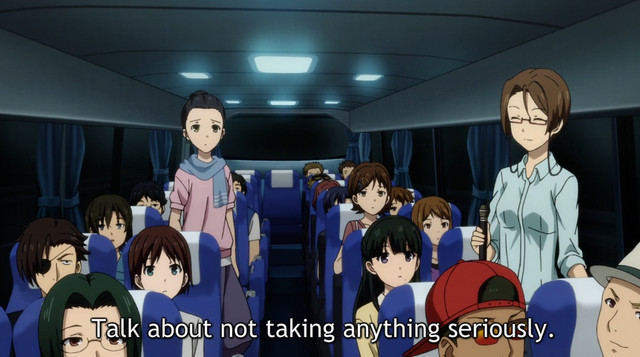 It’s an interesting dynamic, because by all rights many of these people’s situations (like the sickly boy who pleasantly theorizes that he’s not got long to live) should call for genuine empathy and care. Even those of the group who have only petty reasons (wanting to live a carefree life) for wanting to start over are relatable on some level. On its own, the mere desire to escape for a less-than-ideal life isn’t one to be made light of.

The cumulative effect here, though, is one of near-comedy (depending on how you watch the show). You know how people will sometimes laugh in the face of truly horrible situations because they don’t have any other way to respond? The Lost Village seems to actively court the response from its audience, piling tragic backstory on tragic backstory while equating them with far less dramatic motivations by mixing them all together. Eventually the unending stream of personal introductions, ugly backgrounds, and just the sheer weirdness of it all push The Lost Village into the absurd. Maybe this isn’t true for everyone, but at some point I just couldn’t take any of it seriously anymore. It was too much. And the absurdity of all these weird personal issues matches the insanity at the core of the show's premise. In real life, leaving everything behind to take a bus on a one-way trip to a new Eden is as ridiculous a concept as likehood that you'd randomly find thirty people on a bus with such a horrifically wide-ranging set phobias, personalities, quirks, dysfunctions, and backstories. Everything about The Lost Village is designed with the absurd in mind, and we haven't even gotten to the first climax of the story yet.

There’s also an amusing sense of fascination this all develops, because once The Lost Village has established that not connecting with the characters (after all, how could you find any sort of meaningful touchstone with the speed that it moves through introducing each of them?) as the standard, its sublimates all their problems into one time bomb of tension. As the music cues us to be on guard and the cinematography grows increasingly ominous and we’re thrown into terrifying daymare sequences, only to be led to successive moments of relief, director Tsutomu Mizushima and writer Mari Okada lead us to view the characters not as characters, but as walking potential cataclysms. By ratcheting up the tension before leaving us with an anticlimax time and time again through this first episode, they make us fear more and more what will happen when things really do go downhill. And by unhumanizing their characters through subversion to the thrill, they prime them to serve as unpredictable future sources of drama. 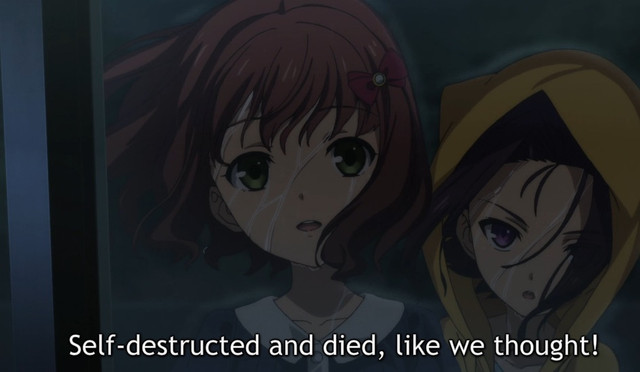 While you could take issue with the way The Lost Village mobilizes human issues one could argue should be treated with sensitivity in service of pure horror/comedy-horror, I don’t think any of this necessarily makes The Lost Village a bad show (or a morally deficient one). All it means is that the show’s goals aren’t to tell a nuanced character drama, but to induce the greatest number of thrills possible via all available methods. Whether it’s actually going to be able to do that remains to be seen, but the unique way it’s gone about setting up literally all of its characters as probable loonies (even the bus driver, the one seemingly normal person at the start, goes nuts before the episode ends) has positioned The Lost Village to launch into dramatic relational fireworks of the highest order. The utter lack of subtlety—whether it was the hilarious hippo song, Lion’s foreboding totally-not-a-prediction of cannibalism, or exploding basketballs—promises us something big, ostentatious, and likely over the top for whenever things really go off the rails for this cast.

Personally, I’m really looking forward to the ride. I'm not entirely sold on The Lost Village as a genuine over-the-top comedy yet, but it's so close (if not already there in places) already that I can't but hope that this is where Mizushima and Okada eventually take it. And the fun thing? They can go basically any where they want! As an entirely anime original production, The Lost Village cannot be held back by such paltry chains as source material—these two wild creators are free to run about without restraint.

Alternately, I think there’s a slim chance The Lost Village could be interested in making some kind of point related to the idea of leaving the real world for an idealized fantasy where you can start over and live exactly the kind of life you want. Sadly, the world is not so convenient, and The Lost Village is open enough at this point to both levy criticisms at or provide sympathy for those wish to leave the world they know in search of respite from the troubles. Of course, there’s also always the possibility the way they leave isn’t what they had in mind when they set out... if you get what I mean. Mwahahahaha... and we're back to the comedy again.

What did you guys think about the premiere episode of the lost village? Funny? Scary? A little bit of both? Chime in down in the comments! 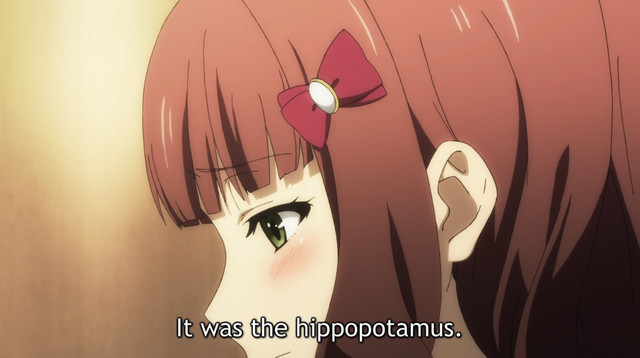