FEATURE: Aniwords – The Lost Village is the Best Comedy of the Season

What do you get when you put 30 weirdos in an isolated village together? 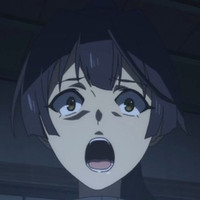 SPOILER WARNING: for the first five episodes of The Lost Village.

Back during the first week of the season, I wrote a somewhat speculative piece on The Lost Village's first episode and how the way it handled its characters during the premiere (along with some other factors) was positioning it to become not just a regular horror-thriller, but a kind of dark, absurdist comedy. Well, we're five weeks into the season now, and after The Lost Village's masterpiece episode on Friday I'm feeling pretty good about that prediction – and not just because my suspicions were proven correct. I'm also quite thrilled at just how good The Lost Village has turned out to be at making a genre I don't usually care for supremely entertaining as a comedy without resorting to excessive graphic violence. There is a definite art to walking the path The Lost Village is treading, and the fact that it manages to do so while staying genuinely funny instead of wandering into "so bad it's good" mockery territory makes it even more impressive.

I think there are three things The Lost Village does extremely well that allow it to succeed in this way, and I want to talk about those three things tonight. They are:

In the first piece I wrote on The Lost Village, I focused primarily on how the elements of The Lost Village's premise and the way it set up its characters invited absurdity. While the basic concept of the plot – escaping an unfair world to start life over again in an isolated village – had the potential to be a serious drama or straight horror-thriller, the overwhelming number of characters introduced and the critical mass of their individual phobias and social dysfunctions paved the way for the show to take the path of comedy. But, of course, anyone can write a premise for a show – it takes execution to make a show work. Under the strong guidance of director Tsutomu Mizushima and through the talents of series composer and scriptwriter Mari Okada, The Lost Village has excuted on all three of these important points: and thus, it succeeds. 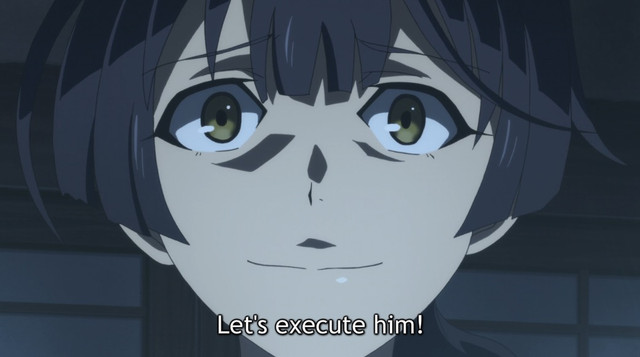 I've combined anticlimax and trivialization into one section not only for the sake of efficiency, but also because these two elements – despite being somewhat different in practice – are ultimately The Lost Village's joint tools of choice in directing audience attention towards the things it wants you to pay attention to: the nonsensical and the stupid, rather than the big and the dramatic. Although The Lost Village has certainly had dramatic narrative peaks (like the appearance of that thing at the end of episode 5, or Jack's sudden appearance in episode 4), the show consistently sidetracks itself from these moments, subverting the drama by turning them into one more trivial topic for our beloved crew of idiots to argue about. Consider the conversation about the apperance of the Giant Mitsumune in episode 5, which is almost immediately derailed by meaningless questions about the specific size of the apparition and is given equal weight to a pointless argument about Hyouketsu no Judgeness—I mean, Catacomb Assbound's name.

This half-episode scene is perfectly representative of how The Lost Village leverages anticlimax and trivialization together for absurd comedic effect. By all rights, the appearance of the Giant Mitsumune is one that should be taken pretty seriously by a group of people worried about bears and strange things killing them, but the significance of the event gets trivialized by the way the cast focuses in on minute details and by the way it is contextually placed on equal ground with the discussion about Hyouketsu no Judgeness—I mean, Jack's name. And this happens over and over again, like how Hyouketsu no Judgeness' untimely demise over the cliff in episode 4 get completely glossed over in favor of the remainder of the episode going on. Or like how Love-pon's insistence on execution is treated as completely valid by the rest of the characters. The Lost Village makes the dramatic trivial, which is absurd – and funny.

As a side note, none of this would work if The Lost Village's drama wasn't completely unhinged, loud, and melodramatic on its own. Trivializing something mildly crazy has much less of a comedic effect than doing so with something BIG. Fortunately, writing Big Melodrama is something writer Mari Okada is exceptionally good at doing (well, at least, she's good at making it Big, whether she's good at making it good is up for debate). Originally, I thought The Lost Village owed a lot of its zany melodrama to Okada's influence, but some recently translated interviews have revealed that she was brought on to the project after many of its basic ideas had been put in place – which leads me to believe this is more an effect of her specific proficiencies being well-matched to the material, perhaps moreso than with most other things she's written. 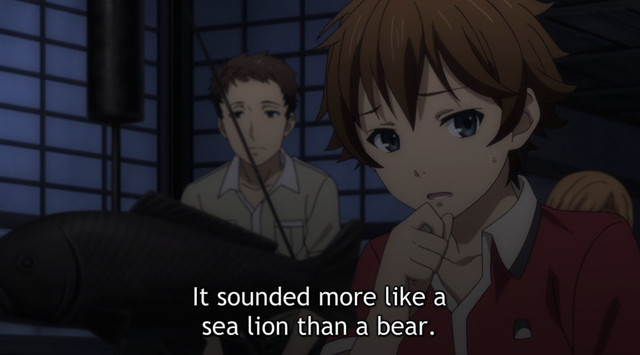 Tsutomu Mizushima is not a bad anime director. While he doesn't rank among my favorites in terms of his storyboarding and aesthetics shot composition, he's got a great sense for visual pacing, flow, and effective continuity. The Lost Village has almost none of these traits, while frequently (and actively!) doing exactly the opposite of what is considered traditionally good direction. And this makes it... good? Yes.

Consider this shot from episode 5 – here's the link. You'll notice one of the characters, Mikage, is mostly covered from view by a pole in the middle of the screen. You might also notice that this makes absolutely no sense, as Mikage is the person talking in this shot. There isn't even a basic cinematography technique I can refer to that this violates, because it should be self-evident a character is talking in a room full of people in a scene like this should be visible to the audience. But he isn't, and the shot is so egregiously poor that it's impossible for me not to interpret this choice as a deliberate one. It contributes admirably to the overall nonsensical feeling that pervades this part of the episode by effectively neutering Mikage's self-serious persona. Even the show doesn't take him seriously, despite the fact that his worries are actually quite reasonable.

Obviously bad cinematography like this isn't just confined to episode five. There are pointless canted shots of Lion in episode 3, consistent framing framing of Lion through a window in episode 4 for no apparent reason, terrible shot composition that partially blocks off characters, and (although this difficult to show in a single image) occasionally incoherent editing that mashes weird camera angles, distance, and pacing together in a way that completely wrecks the momentum of conversations between characters. Again, this is all in the service of comedy, as the poor cinematography actively works against other elements of the show that attempt to build tension (such as the music and the plot points). The end result is that The Lost Village sends a mixed message to the audience: "Oh, no! This is bad! But not really." Just as the tension-anticlimax-trivialization structure of the story works against expectations to produce comedy, so the cinematography of the show works against conventions to undermine that which should be dramatic and serious. 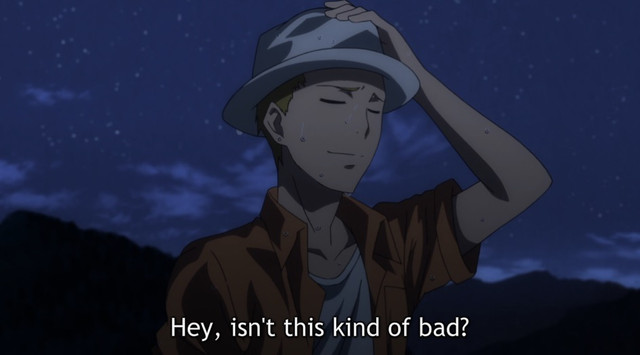 Despite how nonsensical The Lost Village and its characters can seem at times, the show is actually quite good at maintaining its own brand of internal consistency. That is, even its seeming randomness has patterns to which it closely adheres. This is actually a really interesting thing, considering how the first two points I've mentioned in this article rely on the opposite effect of working against expectations. In other words, you can always expect Mitsumune's highest priority at any given time to be "talking to girls," even when it makes no sense for him to be doing so. You can always expect Love-pon to want to execute, torture, or otherwise harm someone, even when it runs completely counter to the goals of the group she is working with. You can always expect Valkana to take an unreasonable amount of personal responsibility for everything that happens, even when he shouldn't. You can always expect Manbe and Pii-tan to be worrying about their future together, even when they should be worried about staying alive. In other words, you can expect each character in The Lost Village to be relentlessly themselves, whether or not it means they react to the proceedings of the plot in a way that a normal human would or not. Which, when treated with The Lost Village's flippant anticlimax and tensionless cinematography, becomes really, really funny.

There's even a coallescing logic to the external events that continue to frighten the cast, as it seems the being haunting them (which sounds different to each person and apparently also looks different to each person) takes the form of something specifically related to the individual who encounters it. What this will mean for The Lost Village's overall plot is difficult to predict at this point, but my theory is that the fact that the hallucinations or whatever are personalized will mean they continue to confuse the characters and pit them against each other.

The upshot of all this is simply that, although it appears disjointed (and maybe even ill-crafted) from the outside, The Lost Village holds very tightly to its own specific logic in structure, cinematography, and character. Even the most dramatic of events are swept under the rug as the camera takes up residence in ill-chosen places and the members of the tour continue on their idiosyncratic ways – all in the service of Mizushima and Okada's weird absurdist human comedy. Whether or not The Lost Village's brand of comedy works for you will likely depend on your sense of humor, but with this I rest my case: as I see it, The Lost Village is the best comedy of the season.

Now let's hear from you guys! Are you watching The Lost Village? If so, what do you think about the show's off-kilter sense of humor? Do you find it funny? Off-putting? Dull? Chime in down there in the comments and let me know! 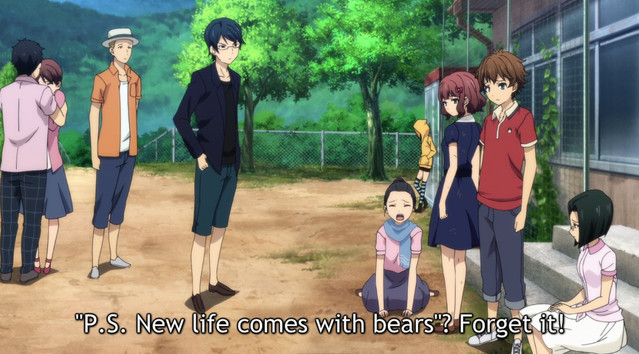