FEATURE: Aniwords – "The Lost Village" and the Death of the Genre

Somebody had to die... 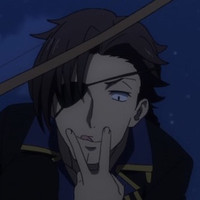 Spoiler Warning: This piece contains spoilers for the entirety of The Lost Village.

The Lost Village ended as it began, with a bunch of oddballs riding on a bus while singing a song about the sad fate of a hippopotamus. It was an appropriately weird ending for a show that's been making idiosyncratic choices throughout its entire run. I've written a couple of different pieces about The Lost Village throughout the season, one which proposed the show was setting itself up to be an absurdist comedy after the premiere and another which expanded on the show's comedic craft. However, now that we've come to the end of our time in Nanaki Village, I think it's important to note that The Lost Village ultimately was more than just a comedy. I noted in my first essay on the show that it was the way The Lost Village handled the overwhelming introductions of its unbelievably trauma-afflicated cast that made it funny rather than the actual facts of their backstories. And, further, my second piece focused primarily on the structure of the comedy and why it made what could have otherwise been a not-so-funny premise often hilarious. I think that I instinctively zeroed in on the show's formal qualities is telling.

Looking back, I still stand by the observations I made early on, but to leave The Lost Village before addressing the other elements of the show would perhaps create the misconception that The Lost Village was solely made up of clever running gags and humorous cinematographic choices. At the halfway point, following up on what was the funniest episode of the show (episode 5), The Lost Village began to approach its story with a decidedly different tone, diving into the backstories of many of its most prominent characters. While undercurrents of the same weirdly comic show still existed, those same elements that had been treated as mere ingredients for the show's offbeat sense of humor began to take on a heavier feeling. I'll admit it—I was pretty confused when episode 6 came around. I thought I'd finally figured the show out and then I found myself smacked in the face with what felt like a mid-show genre shift. And then I realized: it was a mid-show genre shift, in a sense.

And, you know what? The Lost Village made it work. How? Well, that's what we're here to talk about tonight. 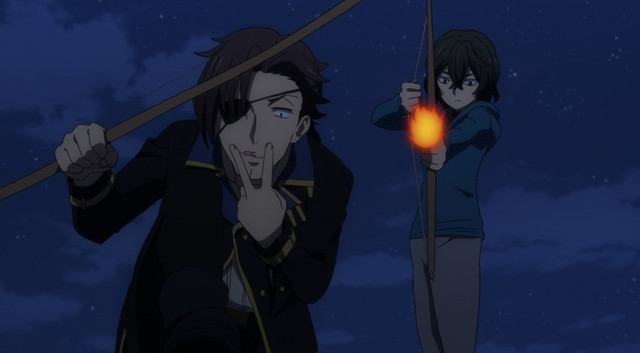 We anime-watchers and general consumers of media stories are pretty accustomed to the things we watch playing by certain sets of rules. Those sets of rules could roughly be classified as genre. Certain kinds of stories do certain kinds of things, have certain kinds of elements to them, and (although this might be harder to argue) are designed to reach certain kinds of outcomes both within the story and in terms of audience effect. A fantasy anime will have some kind of magical or pseudo-magical system, a harem anime will have a dude surrounded by a bunch of girls, a drama should have at least one big tearjerker moment, etc. Obviously, these are more guidelines or tendencies than actual rules, but the effect these trends have on we the audience is obvious: we've been conditioned by our prior experiences with genre stories to expect certain things from certain kinds of shows.

The Lost Village is parody of all this, a riff on the very idea of genres and the rules implied by them. It starts from the very first episode, which, as I argued my first post on the show, chuckles at the silliness of the classic horror-thriller set-up. A bunch of people go off to a deserted place to be (obviously, as the genre has told us to expect) be tormented by some kind of killer or other threat? Hah! How foolish! The first episode of The Lost Village doesn't give a crap about any of that, as the premiere expires with a whole bunch of foreshadowing that is never actually fulfilled (remember Lion giving the ominous prediction about cannibalism?) and without any actual sort of threat materializing. Nothing actually happenes in the first episode of The Lost Village.

Of course, simply undermining the rules of a particular genre doesn't automatically make The Lost Village into what it later became. After the first episode, The Lost Village was only a quirky take on a classic setting that primed the audience's pump for later comedic antics. However, as I alluded to at the beginning of this piece, it also placed before us all the necessary components for a show that was more serious than silly with its characters' myriad personal anxieties, dysfunctions, and paranoias. Had The Lost Village chosen to use the base variables of its premise in a different way, that first episode could just as easily have focused in on a few characters at a time to get us ready for a heartwarming drama about people overcoming the scars of their earlier lives. 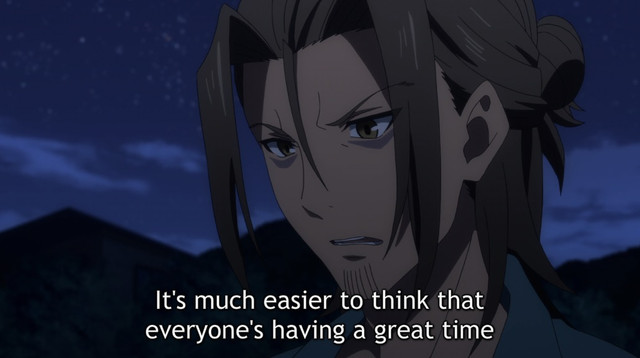 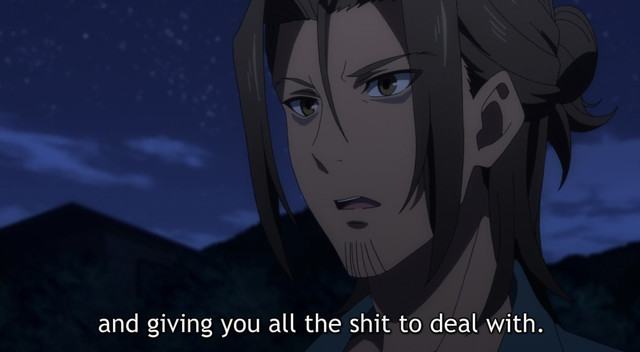 Director Tsutomu Mizushima and writer Mari Okada didn't make that choice, though... at least, not at the time. When episode 6 finally rolled around, the duo began to recycle all the same pieces of the story in a way that turned The Lost Village from comedy into something far more grounded. Perhaps the best example of this is the difference in the way the show directs us to see Lovepon between episodes 5 and 6. In episode 5, she's a character that functions a beautiful piece of weird comedy, her shrieking repetitions of "Execution!" punctuating the conversation at the funniest points. However, in episode 6, that exact same cry becomes representative of the hate she bears towards the monk who took advantage of her and her mother. Same exact character quality, entirely different resonance—and it's all made possible by the way The Lost Village frames Lovepon's backstory in a sympathetic way.

There are other examples, too, like the cinematography suddenly shifting to demonstrate unspoken tension instead of working against tension (the latter point I discussed in the second piece I wrote about the show). And then consider the arc of the bus driver, who goes from being a vomited on for laughs to having a genuinely moving resolution of his guilt over his daughter's death in the penultimate episode of the show. What matters most in The Lost Village is not what's actually happening, but how the show chooses to show it occuring. The gun-loving boy's kind of dumb backstory is harder to laugh at than you'd expect, and it's because the direction at the time visually frames his apparently trivial conflict in a way that treats it as worthy of the audience's compassion.

And so, this sudden pivot in the way it treats its characters—switching from using them as players in an absurd comedy to employing them in a more traditional dramatic structure—is when The Lost Village beginning to truly laugh at the idea of genre. Having already subverted the horror-thriller conventions (the masterstroke here is that no one actually dies in the show), The Lost Village pulls the elements of its newly chosen genre (comedy) and throws them into a blender until they come out as a human drama. It changes out one set of rules for an entirely different one, and then begins to rotate at will between them throughout the rest of the show. But even as it does so, it continues to maintain a particular collection of elements that persist through all the genres its switches between: that is, its characters. 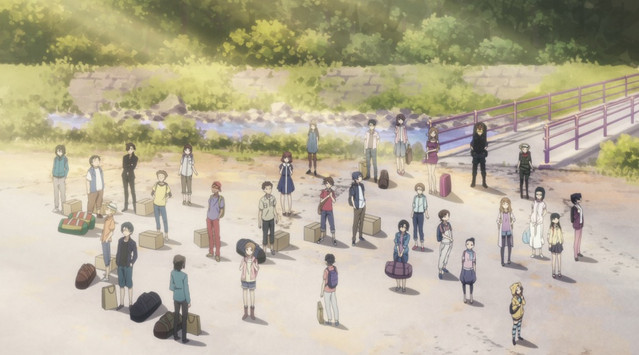 As I noted in my second post on the show, all the characters in The Lost Village behave according to consistent personal patterns. They are always reacting to the events of the show in ways that make sense given who they are as characters. This is what allows The Lost Village to hop between tones and genre beats with such grace—because its characters maintain their behavioral trends, it can easily and believably modify the circumstances around them, alter the way we the audience see the setting, and manipulate the genre elements we're accustomed to seeing used in certain ways without the whole thing breaking down. For example, as utterly innane as it is for Mitsumune to have developed an entirely new Nanaki after hearing about Masaki's relationship with Reiji (basically, a comic element), it fits in with everything else we've learned about Mitsumune's weird personality during the rest of the show. And so, because these lines of the show's logic match up with everything else we've seen, the touching farewell between these two kids as Masaki returns to the real world works. The Lost Village suddenly grabs the conventions of what could be comedy, reimagining them in a way that makes them touching—and it works.

In other words, The Lost Village parodies the idea of genre by absorbing the rules and elements of comedy, horror, drama, etc. and deploying them in new ways based on its internal character-based logic, rather than the other way around. The Lost Village can take or leave any genre at any time (and at times the transitions between them are basically instantaneous) because the guiding force of the show is contained in its own unique principle: consistent character action, no matter how strange. Genre, whether comedy, thriller, human drama, or anything else, serves only as a temporary lens through which The Lost Village directs our attention—and because it has the power of the screen, it can do so with ease. The only question, then, is whether or not we can keep up. Perhaps the most telling exercise here is the most obvious one: try to categorize The Lost Village within a single genre. Which one is it? Can you tell? I can't. And I kind of like that.

Now let's hear from you guys! What did you think of The Lost Village? Like it or not, how do you feel about the idea that, rather than being a genre piece, it pulls from different genres to create an entirely new sort of story? Let us know in the comments below! 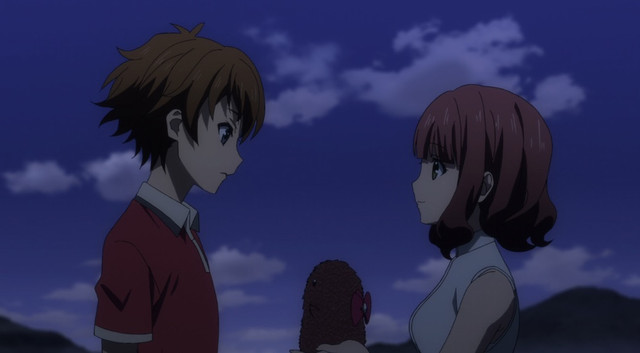 Tags
aniwords, the lost village, theme, storytelling, genre, analysis
« Previous Post
Youth of Japan Prepare to Stay Out Late at the Arcade
Next Post »
New Announcements and Highlights from the "Crunchyroll Summer ROLLOUT"!
Other Top News
29 Comments
Sort by: