FEATURE: Aniwords – Rediscovering the Musicals of My Childhood in Anime Insert Songs

♫ The hills are alive with the sound of anime songs ♫ 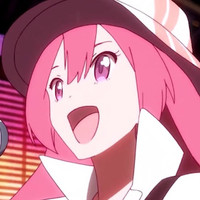 When I was growing up, my family was really big on musicals. I'm not exactly sure how it happened, whether it was my parents' predisposition to the form or just that they noticed my siblings and I really liked them and so gave us more, but I can guarantee you that the three most-watched films in my house during my youth were The Sound of Music starring Julie Andrews, The Music Man starring Robert Preston, and Mary Poppins (also starring Julie Andrews). How many times did my younger sisters and I sit in front of the TV as children, singing raucously along with "The Hills are Alive" or "Gary, Indiana"? I'm not sure, but my parents deserve massive credit for putting up with our caterwauling, which inevitably spilled out past the end of the movie at dinner, leading to many a  "no singing or repeating lines from movies at the table" rule.

It's impossible for me to ignore the fact that these films were instrumental both in shaping the activities I've chosen to involve myself in over the years and my tastes in media. I still remember my high school musical director telling our cast of Footloose that the critical element of the musical was that song took over when words failed. As characters in a musical, we'd talk and talk and talk until we could say no more and the song just burst out of us, expressing those feelings that would otherwise go unspoken.

Flash forward to the present and I still find myself with a great deal of fondness for this idea of emotions that burst out in sparks and explosions. Whether it’s the melodrama of Mari Okada's writing or the inherent campiness of shows like Kuroko's Basketball, my favorite anime are, almost without exception, informed by this particular bent. But, sadly for me, there are very few (if any) anime that follow along the exact same lines as Broadway musicals. The closest thing I've found in anime are idol shows, which likely explains my deep love for them, but despite growing popularity good ones are still rare. Fortunately for me, anime as a whole does have one particular quirk that consistently evokes the same feelings in me that musicals do: the insert song. 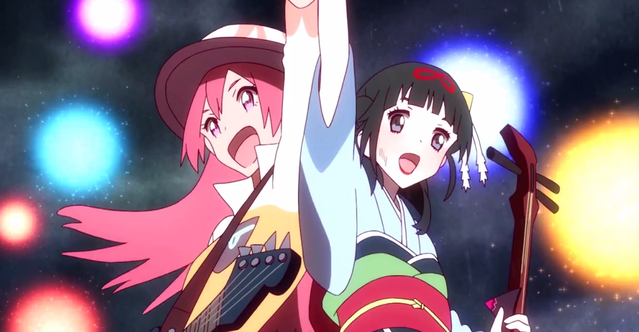 Even if you're not familiar with the phrase "insert song," you know what I'm talking about. While most recognizable in the “opening song plays during the final battle of the final episode" form, insert songs are technically any non-OST track (usually with vocals) that play in any episode. And there's a reason insert songs are much loved within the anime fandom—they're nearly all awesome, if not musically, then at least in effect. There's just something about the opening blasting while the hero throws the final punch to defeat the villain that makes the whole moment shine. But it's not just OP recurrences—there are perhaps just as many examples of insert songs that have never been used before in shows blowing the doors off; for example, the way "Heart Goes On" elevates the penultimate battle in Heartcatch Precure, "Ryusei Dreamline" transforming the finale of Show by Rock! from cool to transcendent, "is" in episode four of Terror in Resonance giving us the single most beautiful moment of the show, or the chilling use of "unravel" during the finale of Tokyo Ghoul√A.

I find it interesting to ponder the reasons why insert songs are so beloved by fans and so often the go-to for anime staff. After all, the base purpose, "to increase the impact of the moment," is one that can also be accomplished by background music. So what is it about insert songs specifically that makes them so special? While I have my theories about why OPs showing up during the final battle work so well (it has to do with familiarity cues, I suspect), those ideas don't encompass the full scope of every insert song used.

Rather, I suspect the effect of the insert song goes back to the idea my high school musical director advanced—that there's something inherently special about voiced music, whether it comes from within the universe of the show itself like the performances in idol anime or shows like Angel Beats! do or from the magical ether of the non-diegetic soundtrack like "Dear My Friend" in A Certain Scientific Railgun's first season. Whether or not it's the characters themselves singing, the human element exists in sung insert songs in a way it doesn't even in grand background tracks. If they sing, it's just how the emotion has burst out of them; if they don't, it's the show singing for them. And I believe that's the same sort of power that captured my attention when I was a child. 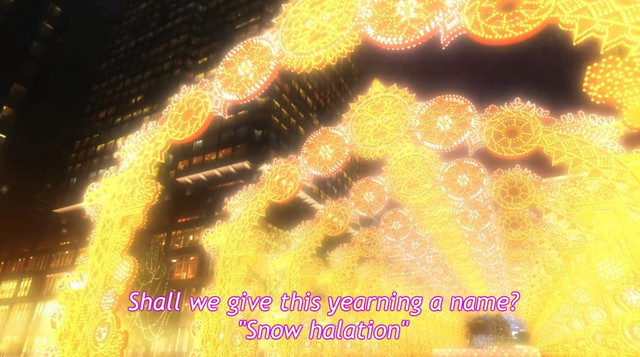 As far as I'm concerned, idols shows like Love Live!, AKB0048, and the Macross franchise have mostly fully come to embody this, as their songs, because they're staged within the context of in-show performances, can occupy both the diegetic and non-diegetic modes at the same time. They're an expression of the emotional context of the show, and yet also seem to come from outside of it—and the viewer is caught in the middle. If you've ever seen episode 9 of Love Live!'s second season and the "Snow Halation" performance, you understand exactly what I mean. It's an insert song that, while it follows logically from the events of the episode, somehow feels separated from it as well because it's so clearly set off from the rest of the show. And the effect is magnificent. Powerful.

And that example, despite being rather particular to the idol genre, is still, I think, representative of general appeal of insert songs. Whether we recognize the songs or not, they have a particular resonance with us — not just as anime watchers, but as human beings. The grand waves of heightened emotion don't just reside in melodrama and big character breakdowns. They're also there in the ways shows seek to pull us into the excitement of a moment and the feelings of entertainment and exhilaration that accompany it. Insert songs are just one (very obvious) element of all that, but they're a pretty neat part of it. And, for me, every time an insert song plays, I’m reminded of all the times music burst out of me as a child in front of my TV along with Julie Andrews. I may no longer be that child, but it’s nice to be reminded of those days.

Now it's your turn to chime in! Why do you guys think insert songs work so well? And what are some of your favorite insert songs moments in anime? Share them in the comments below so the rest of us can check them out and experience them for ourselves!