What better way to blog the new summer anime series Orange than by writing letters to my younger self? 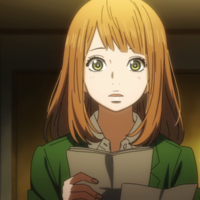 Time is something that appears linear in the moment. There is the present you, the past behind you, and your future ahead of you. In the present, you're often too busy living from Point A to Point B, and moments rarely seem detached from each other due to proximity. You can easily connect the dots because you're living through those moments at the time.

Only when reminiscing, or thinking about the past, do we tend to isolate events — often spurred by photographs, videos, and other small keepsakes that stir our memories. Since Orange is already a look back through a life that has already been lived once, with specific future outcomes, the manga source material reads like a collection of these moments. 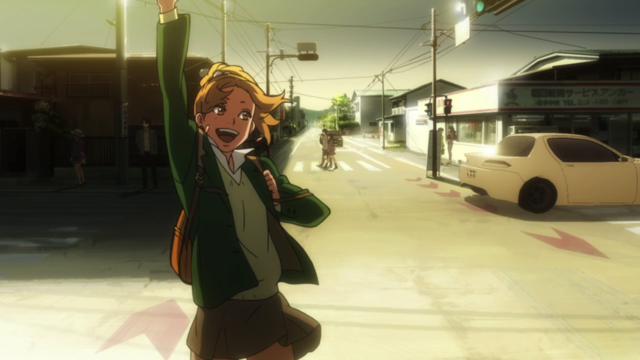 Hiroshi Hamasaki's strongest directorial choice in Orange's premiere episode was the decision to present time as fleeting individual moments that eventually will relate to each other, rather than a linear progression. Like the letters that Naho Takamiya receives from herself ten years in the future, Orange skips from life event to event — the significance of said events matters only to Naho and Naho alone.

The decision of whether to pinch hit or not in a class softball game seems fleeting and unsubstantial in the moment, but is a microcosm for Naho's entire outlook on life, and acts as a catalyst for Naho's eventual love of recent transfer student Kakeru Naruse. Naho receives a missive from her future self for that day, instructing her to pinch hit. Apparently this is a small thing that Naho regrets, either immediately afterwards or later on in life.

Naho's conversation with Kakeru following the softball match — where Naho does pinch-hit the second time around — offers insight to why this specific moment would have stuck with Naho for years to come. After telling Kakeru that her shoes are too small, and that she subsequently neglected to speak up and exchange them, Kakeru watches Naho closely that day, even offering her an easy out from pinch-hitting by speaking up about her injury. Later, Kakeru treats her injury and they talk.

As viewers, or readers, we can only guess at how the original conversation between Kakeru and Naho developed. In the slightly shifted conversation — since Naho decided to pinch hit — Kakeru once again brings up the fact that he's been watching her, and has noticed her automatically shrink back from vocalizing her true thoughts and desires for the sake of not disrupting the group. Perhaps this conversation happened in the original timeline, but in this version, Naho speaks up — something she rarely does — and tells Kakeru that if he wants to play soccer, he should. It's difficult to imagine Naho saying this to Kakeru if she doesn't pinch hit earlier in the day. As she says herself, this is something that she doesn't want to regret ten years in the future, even if it seems like a minor event. The moment Naho tells her friend Azu that she'll pinch hit instead of Azu, is tied to the later moment where she tells Kakeru to be more honest with his feelings. Boldness begets more boldness, and I'd hazard a guess that Naho didn't speak up in front of Kakeru the first time they had that conversation. 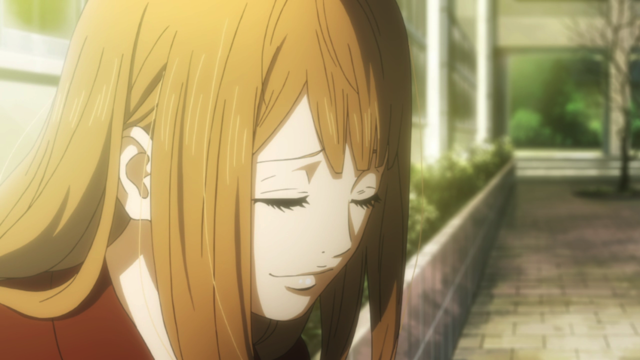 Like Naho, I rarely voiced my opinion in high school, and if I did ever speak up, it was always to agree with whatever someone else was doing. After periods of extreme social ostracization during junior high school, I had learned enough about blending in, and although I had actually developed a strong enough friend group, I already knew that it was easier to just go with the flow.

Each week, while blogging Orange, I'll be writing a letter to my high school or college self, regarding a specific moment in time that I'd want to change. These will range from small personal moments to larger, monumental turning points in my life. This week, I'll start off with something seemingly small, similar to Naho's softball game, that could have had much larger repercussions on my high school career.

Dear my high school self,

How's it going? I know that you're pretty overwhelmed with high school life, but I need you to do me a few favors. In these letters, I'm going to chronicle events that are about to happen, and choices that I want you to make, so you don't repeat my mistakes.

September 9, there are tryouts for the drama club's production of Little Shop of Horrors in two days. You'll try out with the song, "The Lady is a Tramp." You'll make it into the chorus, with a few bit parts here and there.

Here's what I want you to do. Tonight when you go home, dig out the George Gershwin songbook that you buried a few years back when you wanted to play "something cooler." Turn the page to "Someone to Watch Over Me." It's much more suited for your voice, and actually practice. Don't just do it because your middle school drama friends are doing it, put in the effort for yourself.

It doesn't matter what part you get. It only matters that you try.

FEATURE: "You're Not Alone" — Orange, Episode 7