This week, Emily explores Naho's reaction to the letters and Kakeru's admission 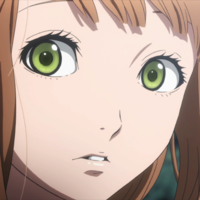 "A letter can't change someone's personality so easily. I wish I'd never read that letter."

Continuing where the first episode of Orange left off, Naho continues to receive hints about transfer student Kakeru Naruse and her future without him. The series transitions immediately into Naho staring at words on a page, written in her own, familiar handwriting, saying the same phrase that Episode 1 ended with — "Now, 10 years in the future, Kakeru is no longer with us."

For me personally, what makes Naho's reaction believable — at the very least, I'm willing to suspend my disbelief that she wouldn't immediately rifle through all of the letters, analyzing them and organizing her plan of attack to save Kakeru — is the fact that I would have no idea how my high school self would have reacted in the same situation. Initially, I probably would have found them creepy — I was somewhat superstitious due to mild OCD, so they would have freaked me out a bit and probably caused small routine changes — and not taken them too seriously until proven otherwise.

Naho is a serious and shy girl. She's not one to take things lightly, yet she too doesn't take the letters with the utmost caution at first because she doesn't know what's actually going on, and hasn't been made fully aware of what's at stake. Despite the letter telling her that Kakeru is no longer alive in the future, the consequences of her actions don't hit her until Kakeru reveals the truth behind why he won't commit to the soccer club and his mother's death.

This revelation is dropped in the middle of an infuriating shoujo romance cliché — giving homemade food to a romantic interest. Orange is very confidently directed, and it shows in how it approaches specific scenes, even when the series is navigating well-worn territory. The visual direction throughout this episode, especially when Naho is about to walk home with her friends without giving Kakeru the meal she prepared for him, is remarkably effective, playing on our potential infuriation with this particular brand of romantic scene while also tapping into possible regrets of our own. First, an establishing shot of her walking home behind her two friends, deep in thought. Then, a closeup of her back walking away, her extra bag with Kakeru's lunch packed inside a conspicuous shade of green on her shoulder. Finally, a shot with Naho out of focus in the foreground, establishing that the school is right behind her. Throughout this scene I wanted to yell at Naho on my computer screen, despite having read the manga and knowing what events will follow. 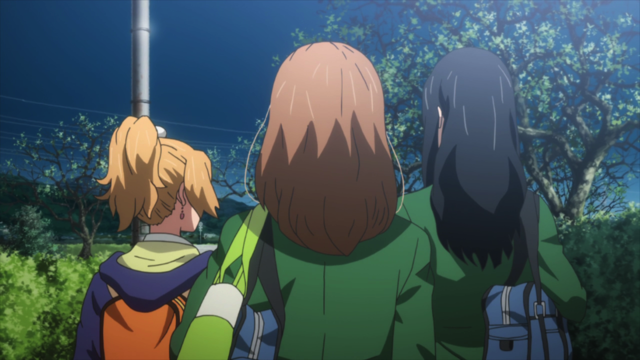 As the viewing audience, we have more in common with Naho's future self. Not only is there the possibility that we, having regrets of our own, resonate with even her smallest bits of future discontent the moment her high-school self experiences them, we also benefit from additional information of what happens in both Naho's future and our own. The visual direction plays with this, and effectively established a strong connection between me and Naho as events unfolded throughout the episode.

More impressive than reiterating dramatic tension, or playing with our expectations of it, is how Orange allows certain scenes to breathe. When Kakeru admits that his mother committed suicide, and Naho realizes exactly why the first letter told her that this was the one day she wasn't to invite Kakeru, the scene moves along at Kakeru's pace — including his drawn-out delivery of this deeply personal information. It observes the two from a distance at all angles while Naho internally berates herself for not listening to the letters.

The question now is not of why she didn't initially listen to the letters' words but what happens now that she — presumably inspired by Kakeru's confession of his mother's death — follows the letters' instructions? Will it make a difference? Should it? 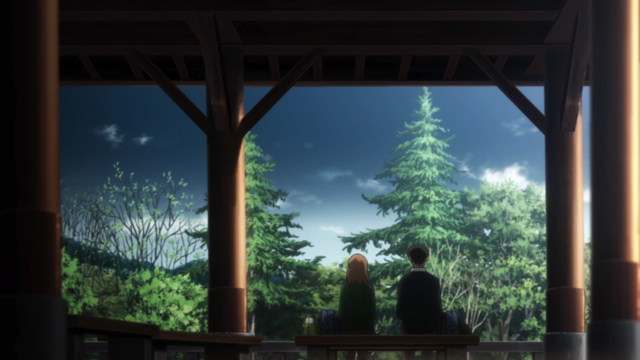 I desperately wanted to connect with people in high school and college, but I never knew quite how. Even now, I struggle with this in my daily life, with a job that requires me to be somewhat visible on social media, and interact with others routinely. Just earlier this evening, I rambled on about something I liked in a text message that made me almost immediately regret writing so much.

To this day, making friends is really difficult for me, since I refuse to open up to people. I realize that this probably sounds silly in the immediate context — writing embarrassing things in letters to my past self — but it's no less true for writing it. All that being said, I'm not in a bad place now. I have close friends, and while I have a myriad of past regrets, there's no guaranteeing that the ability to go back and "right" them would have worked out better or worse than what actually happened as I lived through them — even when it comes to much heavier things than lunches and crushes.

Naho is missing one of her closest friends from high school in her future, yet even she admits that she has a world of happiness ahead of her. Her loss and regret isn't trivialized, but more importantly, her future happiness, continued friendships, and burgeoning family aren't framed as mistakes either. They're simply a part of who she is in the future. The letters won't change her personality, and there may be some regrets that she'll have to live with regardless of warnings received, because some things are only learned through living.

No specific letter from me this week, but I'm certain that I'll have many more personal stories to share as the series unfolds. How did this episode affect you, if it did at all?