FEATURE: "Mob Psycho 100" and the Power of Animation

Animators show their love for anime. 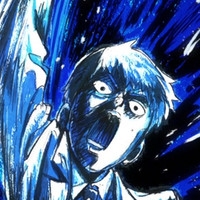 While there’s no shortage of intriguing plotlines and characters in anime, there’s one aspect that undoubtedly distinguishes it from film or literature for me. Surprisingly, the animated component of anime is rarely talked about in many fan circles – either due to the lack of exposure Japanese animators receive in the West or a shortage of discourse on the subject. Regardless of the reason, the visceral power of animation is definitely something that we shouldn’t ignore – and as a show like Mob Psycho 100 proves, for a good reason as well! 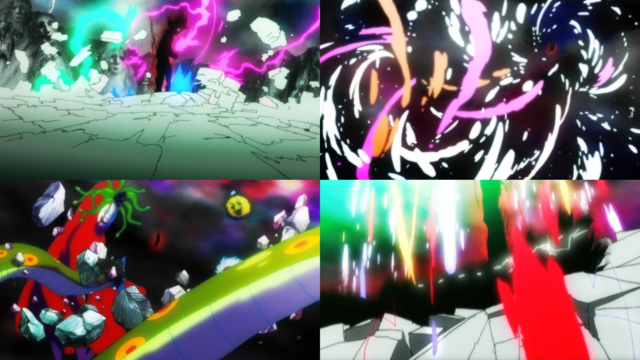 Within seconds, I was in love with the premiere of Mob Psycho 100. The anime opens with pure, unrestrained spectacle: a barren, grey wasteland erupts in a deluge of green, red and purple energy as colors and emotions fuse together. As the ground ruptures, a shadowy figure emerges and is chased down by enigmatic creatures – which are quickly vaporized and transformed into additional colors on the canvas. Explosions, lightning and Lovecraftian horror all mesh into one as the scene becomes a figurative expression of artistic passion; appropriately culminating in a psychedelic explosion.

While it’s easy to become disoriented by the madness, this is Mob Psycho 100’s greatest asset in my view. The opening scene is devoid of dialogue and may not carry much narrative weight at the moment – however, it succeeds at being a display of the extent of what human imagination grants. A scene such as the opening of Mob Psycho 100 is something that we could only experience through a medium like anime – it truly surpasses the constraints of reality. In this case, animation director and character designer, Yoshimichi Kameda, and his team show that pictures can speak louder than words. 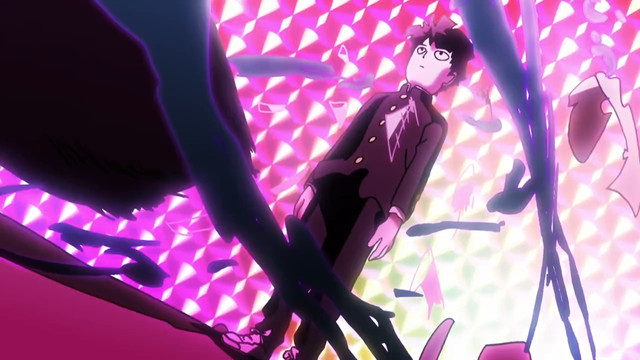 Mob Psycho 100’s first episode essentially does what you’d expect of a first episode: it introduces some of the major cast members, basic elements of the setting and throws a couple narrative hooks at the viewer. As a result, it’s a foundation heavy episode. Now what makes Kameda and co.’s artistic touches significant are that they convey more about the characters and setting than dialogue alone would be able to accomplish.

Take the main character Mob, for example. Mob is your average middle school boy that would be forgettable were it not for the fact that he is an Esper possessing strong psychic powers. Although details surrounding Mob’s personality and background are few in number, there’s plenty that can be inferred about Mob through his character design.

Kameda has adapted ONE’s original design of Mob in such a way that it reinforces his lack of presence. Kameda uses heavy line art to emphasize the imperfections in Mob’s appearance, such as the bags under his eyes and loose threads sticking out of his clothes – which by extension reflects the design philosophy of the rest of the human characters in Mob Psycho 100. In contrast to the polish and perfection of modern character designs in anime, Kameda and ONE are not afraid to depict ugly or even grotesque subjects, which suggests a lot about the state of Mob Psycho 100’s world. It’s rather telling when the demons and ghosts are not necessarily the most unsightly individuals in the crowd. 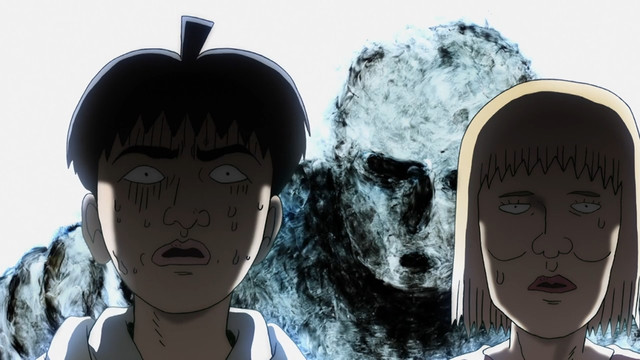 If anything, the supernatural in Mob Psycho 100 are bright, colorful and distinctive in their appearance from one another – which helps to characterize them in my view. One of the first ghosts we see appears as an animated oil painting while another is a repulsive eyeball monster which oozes slime and has mounds of trash lodged in its body. The fact that Bones’ animation staff are willing to go to such great lengths to depict a monster that gets exorcized by Mob a few seconds later shows their dedication to their craft. It may seem like wasted effort to some, but there’s something inspiring to be said about an anime in this decade that relies on non-traditional and vintage techniques for expression.

It’s not often that we see a team of animators’ passion exist in such a raw state, especially when it comes to an anime made for mass consumption. Mob Psycho 100’s premiere honestly feels like a playground for Kameda and the various animators at Studio Bones. It’s filled with painted stills, hand-drawn locales and even design aesthetics which echo back to the “heta-uma” art movement of the 70’s. Mob Psycho 100 brings together a marriage of old styles and new methods of production, but above all it’s a product that conveys an honest desire to rise above the status quo and a love for the animated medium. 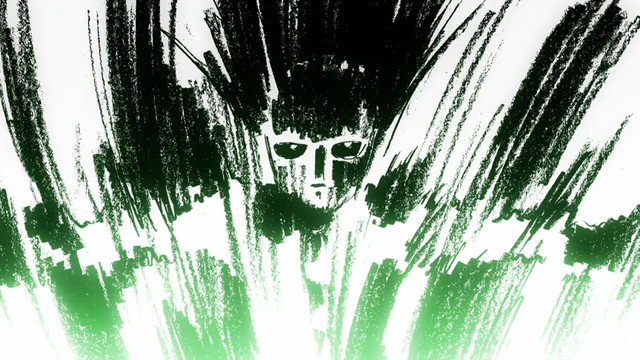 Share your thoughts on Mob Psycho 100's premiere in the comments below!