FEATURE: Why It Works: Reigen's World

A new column opens with a look at Mob Psycho 100's shameless conman! 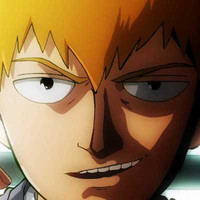 Hello, citizens of Crunchyroll! My name’s Nick Creamer, and today I’m kicking off a new column that’s very presumptuously titled “Why It Works.” We all love when moments in anime really punch us in the gut - when a character pulls off that last-minute victory, or a hero declares their belief in justice in the face of all the forces of the universe. But when we talk about those moments, we can often get caught up in, well, the stuff that actually happens - the big twist itself, the important plot event, the super cool thing that happened.

This column isn’t going to be about that. I don’t care about that stuff. Plot is boring.

Instead, here we’re going to talk about all the stuff before that moment, or the way it’s framed, or the exact specific super-important lines that are used. If you reduce an anime to its summary details, you’d have an accurate plot outline, but not the show you love. It’s the details that bring our favorites to life - the careful execution and thousand tiny choices that turn a series of cool ideas into something that can make us cheer, or laugh, or cry. 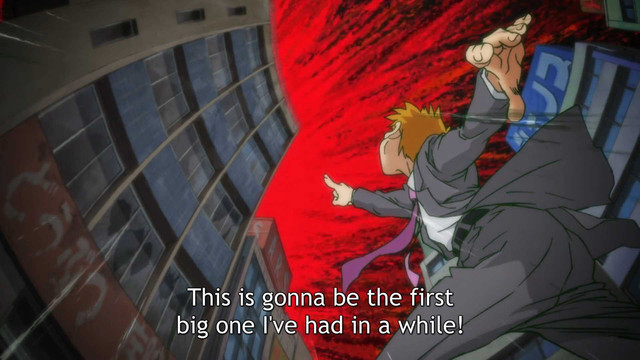 And in spite of that confident column title, I want to say right here and now that there’s really no “correct” answer when it comes to this stuff. The moments that work for us can work for any number of reasons, and you can unpack their craft in countless directions. There’s no shame in having a strong gut response to something and then trying to explain that response after the fact - we have gut feelings because there is something to explain there. Something that was crafted on a textual level hits us in an emotional sense and bam, magic happens. All I can offer is the stuff that works for me, and hopefully that might either ring true to your own experience or help you articulate why your own favorites work the way they do.

So let’s start with something that really worked for me in one of this season’s hottest new shows - Mob Psycho 100. Mob Psycho is blessed with an incredibly talented director and one of the best animators in the business, plus it’s a show about psychic detectives from the same mangaka who brought us One Punch Man, so it’s little wonder that people are talking about it. And while Mob himself is the character who prompts Mob Psycho’s phantasmagoric psychic spectacles, today I’m gonna talk about his sham of an employer, Reigen Arataka. 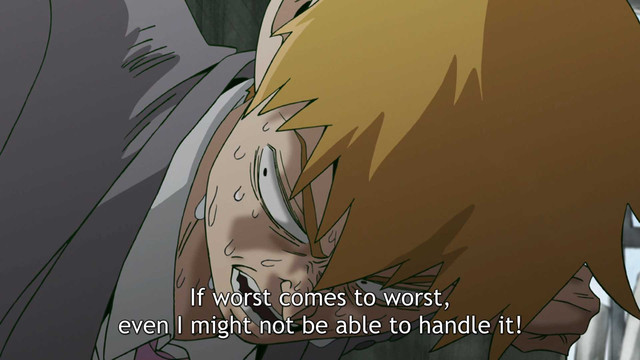 Reigen’s a con man - he claims he can exorcise ghosts, but he actually doesn’t have any powers, and instead foists all of the actual exorcisms onto his underpaid lackey. He lies to his customers and he lies to Mob, and yet, in spite of all that, I actually find Reigen very charming. And the greater part of why that is comes down to the fact that Reigen gets to occupy his own private world. Reigen is not actually a talented private psychic investigator, but he puts on a very convincing act - and when Reigen is in control, the camera is on his side.

Reigen’s world is clear in his first scene, as he considers the request of a new client. His office is depicted as the archetypal private detective base: a small rectangular space cluttered by filing cabinets, with a single door leading outside, a desk against the far wall, and a window behind it with shades half-drawn. Reigen’s power is established in one shot through high-contrast lighting - his raised finger is wreathed in light as he pontificates on the psychic detective biz, while the contrasting shadow adds an air of menace to his rakish grin. Shortly after that, Reigen moves to the window, and we get one of the most iconic noir shots available as he peers through and then closes the blinds. 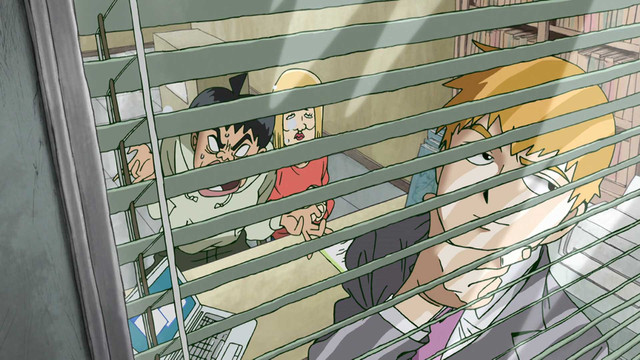 Reigen’s performance isn’t just sold through the ways it mirrors classic detective fiction. The camera angles are also key here; in order to sell both Reigen’s authority and the menace of the spirits he’s describing, it often cuts below him, presenting him as a figure of power in a broad and dangerous world. And Reigen’s body language is equally important; in contrast to Mob’s eternally stiff posture, appropriate for an awkward middle schooler, Reigen exhibits a practiced slouch that simultaneously expresses confidence and world-weary fatigue. Reigen’s feet and shoulders are consistently emphasized, steering his body between the stylish poses of a master detective.

Of course, Reigen isn’t actually that person, and so his framing not only sells the world he’s trying to create, it also acts as a long-form setup for regular punchlines. It’s a smart form of comedy; because Reigen’s faux-noir aesthetic is compelling for its own sake (elevating both the immediate sense of tension and general genre atmosphere), it doesn’t seem intrusive, but whenever his facade is broken, the end result is funnier for him having been so serious a moment before. Reigen’s performance is entertaining enough that you want to believe in it, but that also makes the moments where his facade fails that much funnier. 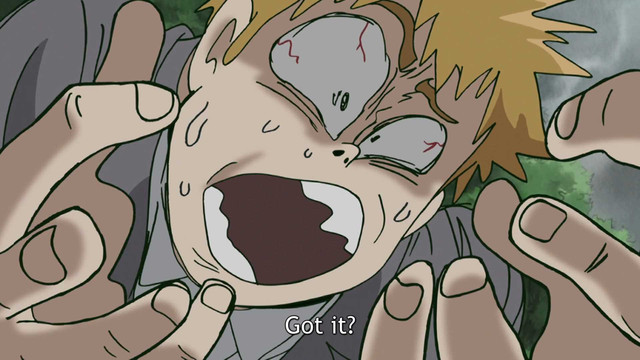 Beyond its inherent stylishness and the way it builds to comedy punchlines, there’s actually one more thing I like about Reigen’s world. At the end of the first episode, we see Reigen and Mob approach an abandoned tunnel, where Mob outright admits that any normal person would be torn apart by what they’re about to face. Reigen jumps at this briefly, and looks away - but then he steadies himself, and confidently tells Mob that that’s why they’re going to take care of it. Reigen may not be “strong” in any conventional sense, and he is certainly taking advantage of Mob. But to know you’re weak, and know you’re bluffing, and still spit out that heroic line - that’s a strength too, in its way. There’s something I can really relate to in that.