FEATURE: Why It Works: The Rolling Hills of Morioh

JoJo's Bizarre Adventure has always had a personality all its own, but Diamond is Unbreakable is still something special. Today we explore the winding avenues and dark corners of Morioh! 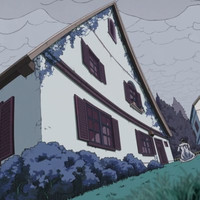 JoJo’s Bizarre Adventure has definitely gotten sillier over time, or at least, its silliness has transitioned from the implied to the actually textual. Early-season moments like Jonathan exclaiming “my arm is better - look, I can even lift this heavy rock!” or Stroheim marveling at the power of German engineering were certainly funny, but they were funny in an unspoken, “this show is a priceless camp spectacle” sort of way. The punchline wasn’t conveniently delivered by another character; the punchline was simply that this show existed at all. You weren’t even sure if JoJo’s Bizarre Adventure was always trying to be funny, or if Hirohiko Araki had simply watched so many bad American action/horror movies that their language flowed through his very blood. 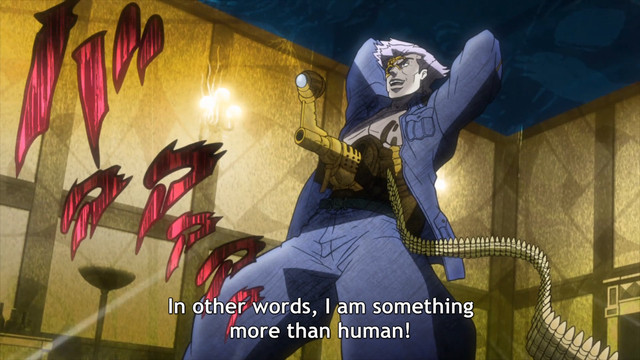 The show’s tone has shifted since then. There are still many, many moments of surreal incidental humor (Kakyoin staring in horror at the words BABY STAND, Jotaro confidently defending himself by filling his jacket with heavy books), but there are just as many moments of “we’re friends… of justice, that is,” or Joseph just making a general fool of himself. JoJo’s Bizarre Adventure has discovered its own sense of humor, beyond the inherent marvels of its dramatic choices. And at times, it almost feels like something was lost in the process.

In Diamond is Unbreakable, JoJo’s Bizarre Adventure has basically synthesized its inherent absurdity and overt sense of humor, in a season where almost every villain is not only ridiculous, but also ends up sticking around after their defeat. Morioh’s villains aren’t hardened killers sculpted by Dio’s hand - they’re random people who just so happen to have received absurd powers. They don’t want the power to rule the world - they want boyfriends and pocket money and inspiration for their manga. 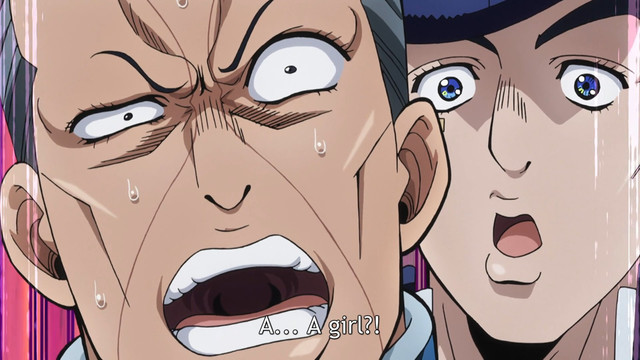 You’d think that a shift like that would somewhat diminish JoJo’s dramatic intensity. But fortunately, while JoJo’s overt conflicts have only gotten sillier, its mastery of genre fundamentals has gotten stronger and stronger. And so today we’ll talk about Diamond is Unbreakable’s most consistent, compelling antagonist - the town of Morioh itself.

Morioh’s fundamental nature echoes Araki’s love of old-fashioned American horror cinema. The town is ostensibly a Japanese suburb in the 90s, but from its sprawling cul-de-sacs to its manicured lawns and street lamps, it truly feels more like a slice of 50s Americana. Morioh is the kind of town you see in a movie like The Stepford Wives, or Edward Scissorhands - heck, it even opens with the county policeman who everybody knows by name. “Idyllic, conservative suburb hides rotten core” is a horror concept that’s been mined for decades, and JoJo’s wild Stands offer a fantastic riff on the tenets of the genre. 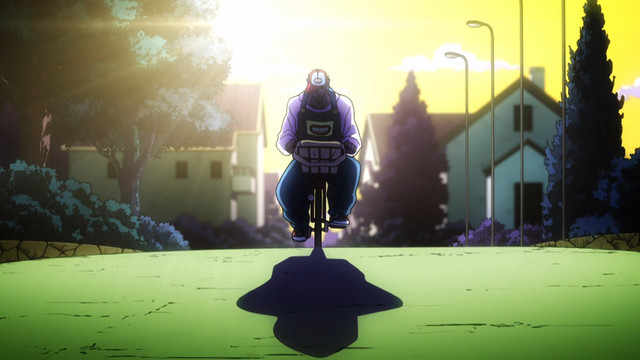 Morioh is presented as a sleepy little town, and at times, it seems to be just that. One of the greatest strengths of Diamond is Unbreakable is that its characters feel like natural friends, and that many of their adventures build up their personalities even as they present exciting episodic challenges. The lack of a driving force like “we need to kill Dio before Jotaro’s mom dies” gives Josuke and his friends plenty of time to be themselves, which not only makes them more engaging characters, but also creates an initial atmosphere of calm that the show undercuts in all sorts of compelling ways.

Much of that undercutting arrives as a result of Diamond is Unbreakable’s phenomenal art design. JoJo’s first season had style for days, but Stardust Crusaders generally kept to a more mundane visual personality. Diamond is Unbreakable’s new directors Yuuta Takamura and Toshiyuki Kato have brought funk back to JoJo, and in terms of backgrounds, it means that Morioh is portrayed almost entirely through sickly, not-quite right pastels in strange, offputting color schemes. The color palette almost instinctively conveys the idea of poison or unwellness - neon green, purple, and yellow are definitely not colors you associate with vibrant, living things. The town’s world feels almost Dr. Suessian, but with a clear hint of danger - just take a look at the town’s endless rolling hills, or the bizarre filtering over Josuke and his friends’ homes. And the show’s momentary reaction shots are a marvel, equally adept at elevating mundane suburban events to high drama or emphasizing the inherent body-horror creepiness of the show’s designs. 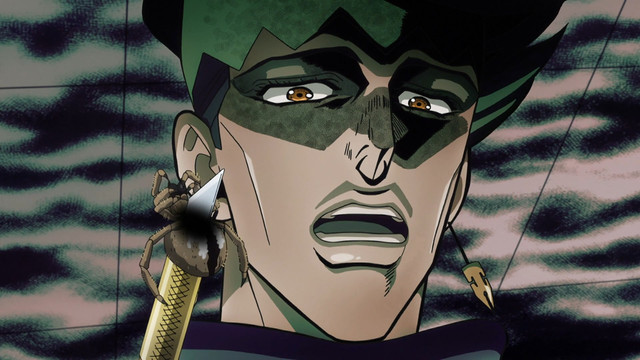 Beyond the fundamental designs, the danger of Morioh’s world is also smartly conveyed through a combination of dramatic direction and firm genre fundamentals. On the direction side, it’s hard for an episode of this show to pass without JoJo finding time for a dramatic held fisheye shot. Shots like these embody the central promise of Morioh - everything you see is mundane but warped, made threatening and unfamiliar by the slant of the camera’s gaze. Those shots are perhaps the most ostentatiously "wrong," but JoJo constantly makes an Other of Morioh through sharp angles and voyeuristic perspectives and shadows. The world is large and menacing, and our perspective on it is skewed by color, by framing, by ugly closeups and threatening implications.

And of course, Morioh offers another perfect playground for Araki’s love of horror classics. This fondness initially became clear in Stardust Crusaders, where we spun through episodes echoing Chucky, or Christine, or Freddy Kreuger. But in Diamond is Unbreakable, the random episodic digressions of Stardust Crusaders give way to a specific brand of suburban horror, meaning the show highlights two particular classic modes: the haunted house and the home invasion. 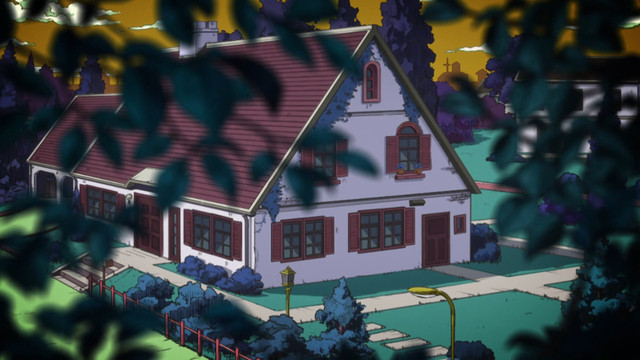 Both of these horror templates have already gotten a variety of compelling riffs so far. The season’s first arc is a classic home invasion story, where Jotaro and Josuke find themselves trapped by a dedicated killer, the home Josuke knows made unfamiliar by the threat of the enemy’s Stand. Later on, Koichi suffers his own two-in-one home invasion narrative, where he is first dragged from his bed by Yukako Yamagishi, and then actually has to barricade himself against her in her own home. And the season’s haunted houses have varied from the house at the end of the lane to the bloody, deserted farmhouse to the street you never noticed before, but now can’t seem to leave. You might think Morioh’s fairly consistent setting would limit Araki’s storytelling choices, but instead he’s used it as an opportunity to explore all the various subcategories of horror available in its general suburban horror shell.

So yes, Morioh is quite a character. Within a cast that already features many of JoJo’s best characters yet (Speedwagon’s absence aside), Morioh is still one of the highlights of the season. I look forward to seeing even more ways Araki and this season’s talented crew make the most of this creepy, crazy town.