FEATURE: Aniwords – What We Want When We Watch Sports Anime

A column inspired by the Olympics! 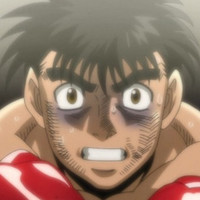 I spent a lot of time over the weekend watching Olympic soccer (as well as a few other sports), largely in lieu of my normal anime marathons. As I was doing so, I found myself struck by the difference in the experience between watching live sports and watching anime. Of course, that the two forms of entertainment provide different sorts of effects to the viewer isn't all that surprising, but it did get me thinking about the ways the two forms differ and how sports anime, in particular, reframe sports through particular techniques and structures to make them successful at capturing and holding the audience's attention.

I've actually written on a couple of different sports anime for the column before (once on Kuroko's Basketball and once on Haikyu!!), but today I want to take a broader look at the idea of turning sports into anime, some of the challenges inherent to the task, the ways those challenges are overcome or compensated for, and how all this is expressive of the differing demands we bring as audience members when we come to watch a sports anime versus live sports. Of course, not all of the points I'll be tackling today are necessarily unique to anime, but it is true that anime, as animation, faces a range of challenges that live-action sports TV or films don't. Furthermore, because sports anime draws on the traditions of anime, we'll look at some of the uniquely "anime" aspects of turning sports into cartoons.

And, by the end, I hope we'll all have a better idea of what we want when we watch sports anime and how sports anime make that happen. 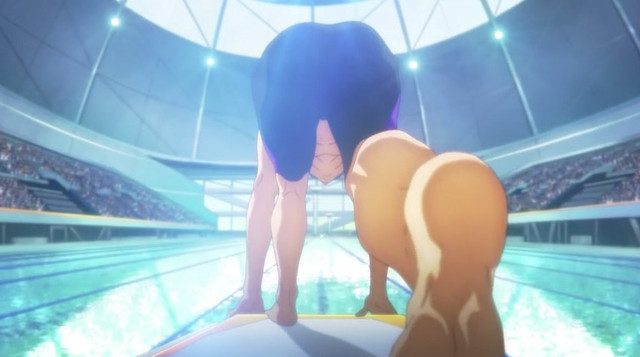 To start, what is it exactly that we want when we watch sports anime? Well, the fact that they're called "sports anime" is our first clue: we want anime that have sports in them! As obvious as that may seem, though, it's not quite so simple. Watching sports anime typically isn't something we do just because we want to see sports—if that were the case, sports anime has no chance against actual, live sports. Instead, what we want (whether we know it or not) is a kind of mixture between what appeals to us about sports and what appeals to us about anime. We know going in to any sports anime that it's not going to be the same as watching the Olympics, so it stands to reason that we're looking for something else besides just sports. However, at the same time, we aren't just watching any old anime, so it's equally true that we're looking for anime that contains at least an approximation of the appeal of real sports. The first of these desires is easily met, but the second... not so much. And so, sports anime must negotiate the complex territory between these two appeals—attempting, in a way, to be something they are not. How do they do this? Keep on reading to find out!

Let's consider the two most significant challenges sports anime face. First, they are confronted with the unenviable task of creating the same sort of tension and immediate excitement that arises naturally in real life sports. The sense of conflict, the battles of skill and willpower, the shifting momentum of the games themselves... as entertainment, sports carry these elements innately. That's just how they are. But when creating a sports anime, all those pieces must not only be invented through the imaginations of the creators, but also contest with the viewer's (typically) deep familiarity with the real thing.

Second, sports anime must deal with the basic limitations of animating the motion of sports. For most live sports, motion is a foundational assumption—however, again, anime faces the challenging of battling with what the viewer is accustomed to seeing and the production reality that no anime can possibly animate constant motion. While this doesn't preclude the existence of singular outbursts of incredible movement in sports anime, it does mean that these instances are necessarily going to be the exception, rather than the rule. In essence, then, these two challenges represent a single basic conflict: anime can never fully replicate the sensation of watching live sports—and so, to establish its worthiness for the viewer's attention, it must innovate. 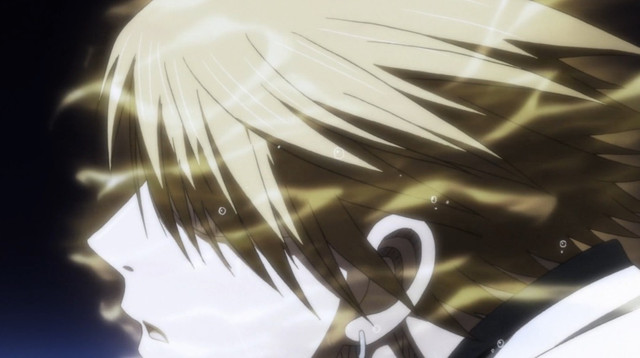 So, we move on to sports anime's answers to these challenges. The most universal way sports anime (and, really, any sort of fictional sports story, whether anime or live action) overcome the gap between the expectations of the audience for sports and the realities of what can be accomplished within the animated medium's constraints is through the use of story. During my first few years of college, I religiously checked the National Football League's website—and while doing so, I came to realize that part of the NFL's media gambit was creating narratives (around teams, around players, etc.) to thread the games together. Why do this? Because humans are creatures accustomed to stories and drawn in by them—and so creating stories built fan investment into the whole superstructure as a way of keeping them engaged in between weekends and offseasons.

As fiction, sports anime have a distinct advantage over live-action sports on this front because story can be woven into the very fabric of the entertainment product and used to capture and maintain the audience's attention in a far more organic and convincing way—and, further, can give life to the characters outside of just the sports matches. This, then, becomes a critical means of keeping the audience engaged in the sports themselves despite the fact that the games lack the advantages of intrinsic tension and motion that live sports do. Rather than being sports for the sake of sports, sports in anime become pieces of the larger narrative tapestry and, when done well, gain significance beyond simple contests of athletic skill.

As I said, this particular idea isn't that unique to anime (films like Rudy do this, as well), but what is more distinctively anime is the way sports shows tap into established anime genre structures and tropes. Among these, the incorporation of a shonen-style journey is likely most common (the currently airing soccer anime, DAYS, is an example of this), but other recent sports anime like Kuroko's Basketball and even Free! gain part of their appeal through explicit market-targeting and their casts of bishonen boys (many of whom have characters at least based on recognizable anime archetypes) going through adolescent identity struggles. Whether or not these more anime-specific techniques are good or bad isn't really the point; it's more relevant that they are notable strategies used to build audience engagement. 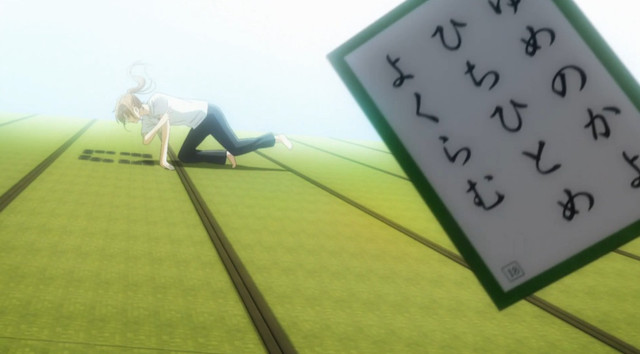 On to confronting the second challenge—emulating the motion of sports through animation. Now, it's important to note that it's not exactly the challenge of depicting motion at all (in the hands of a skilled animator, even nuanced and realistic motion is possible), but the production realities of animation mean that animating the unending movement of sports a pipe dream. Particularly in team sports, drawing every single character in motion at all times is simply impossible—and so, a different answer must be found, a compromise between what's practical enough to be producable and yet similar enough to live sports to appease the audience's (concious or not) demands.

This compromise works on two fronts, one which somewhat ties into the narrative techniques already discussed and another the takes advantage of the unique strengths of animation and cinema. The first of these is decided in the construction of the matches (something that's linked to the idea of narrative in sports, as well). Because reproducing every second of the match is impossible, certain moments, those that have inherent dramatic strength, must be chosen and highlighted—while simultaneously being balanced against a need for continuity that produces the illusion of a linear, connected game. Doing this reduces the overall amount of motion that must be created, and allows those moments that the audience does see to be strengthened by tying them to the show's narrative. In effect, the games themselves are made up of many tiny stories—"will he dribble past his opponent?" or "can he endure his injury and finish the match?" 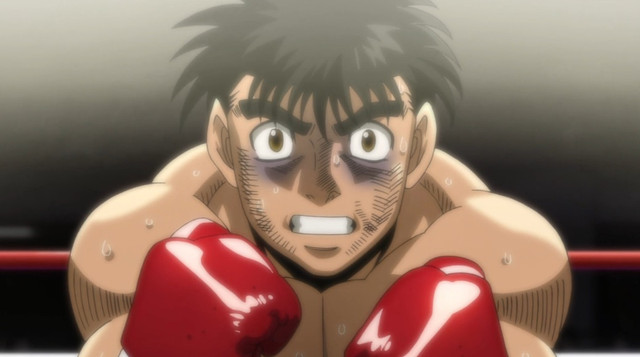 The second part of the compromise is possibly the "most anime" part of creating sports anime—the use of animation's visuals (both shortcuts and unique strengths) to imply motion, create drama, and ultimately make the sport itself entertaining in a way that is both unique to the animated medium and yet still recognizable enough to connect with the audience's preexisting ideas about what sports ought to be like. We're all familiar with anime's most common visual shortcuts (things like speedlines, split screens to show characters reacting to events, series of still shots to imply time passing, montages of brief cuts of animation).

The next level up is the use of imagery to invest particular moments with visual drama beyond the basic tension of the sport. Osamu Dezaki, the legendary director of Ashita no Joe and Aim for the Ace! was a master of this. In addition, Dezaki's work is also emblematic of what's possibly the most idiosyncratic trait of anime—the freedom of animation. Whether it's through inventive shot framing or the unrivaled ability of animation to put the viewer right in the middle of the action or the potential for impressionistic motion, all of these techniques can be used to highlight the specific moments of drama chosen by the creators to give them incredible senses of gravity and energy. It's like the moment a goal is scored in soccer, except filtered through a creative lens into particular instants within a show.

Of course, with all this said, the ultimate criteria is execution. Just as a badly played basketball game can be boring to watch, so a poorly constructed anime can fail to entertain. The fact that what we want when we watch sports anime can be achieved doesn't mean that it will be. There are no guarantees, but the best sports anime typically do at least one of the two big things (crafting a compelling story around sports or leaning into the visual strengths of animation to craft matches that are entertaining on their own merits) extremely well, with many of them doing both. In any case, I always think it's fun to see sports anime make these attempts—and so, I'll keep watching.

Alright, time to hear from you guys! Why do you like sport anime, which ones are your favorites, and what about them makes you like them? Share with us down below in the comments! 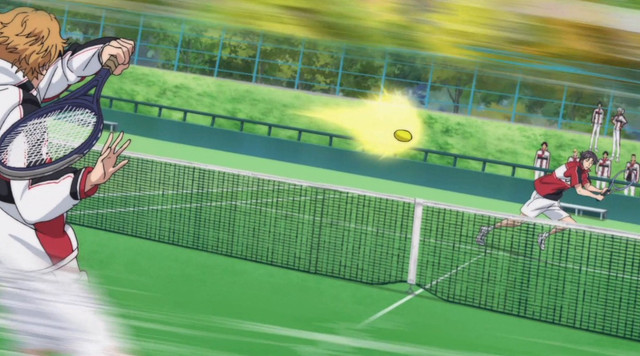