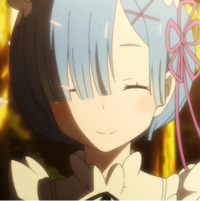 As an anime food blogger, it gets hard sometimes to find recipes to recreate. Either you find a food that you've already recreated in some way, or the food you want to make requires some kind of really difficult/expensive to acquire cooking tool (props if you know what anime that's from), or, worst of all, the food you want to make DOESN'T EVEN MAKE AN APPEARANCE IN THE ANIME, even though it's mentioned several times.

So, cue my frustration when Rem from Re:ZERO goes on and on about making a rabbit stir fry with nuts and steamed potatoes, only to totally drop the ball and fail in every way to provide me with a finished product to recreate. I know, I know, it's part of her character arc to not make the stir fry, it just shows how she feels even worse about herself, and I shouldn't get mad at her for not making a dish for me to recreate... but sometimes it all gets to be too much. I just want to make some kind for food for Re:ZERO, so I must take matters into my own hands. 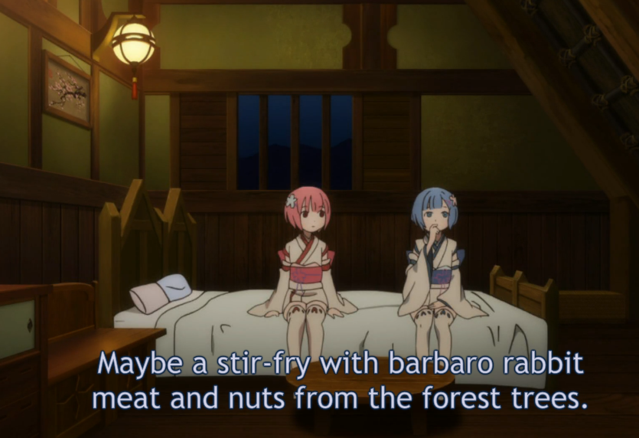 But, on the other hand, since we don't have an actual picture of the final dish, we can be really creative with what we do! She says she wants to make a stir-fry with rabbit and nuts from forest trees. Stir fry is typically made with a sauce, lots of vegetables, and meat. So, I decided to do a bit of research about which vegetables grow best in partial sunlight/forest-like conditions, and came up with this list: onion, carrot, mushrooms, snow peas, and broccoli. IDK what kind of nut this is, but it SORT OF (actually, on second glance, not really) looks like an almond to me, so we'll have fun with it. 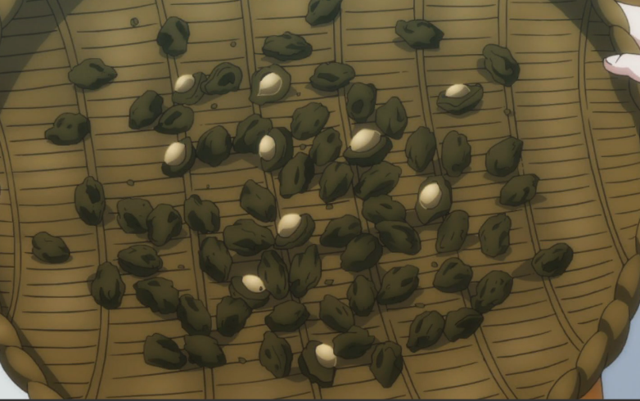 For aromatics we'll stick with the typical ginger/garlic combination, both of which would be easy to aquire. She also wants to have steamed potatoes which, from the picture later on in the episode, look like yams to me. That just leaves the rabbit meat for the stir fry.

Sigh. I tried to make something with rabbit in it once. Let me tell you a story of infinite sadness. I studied abroad in Spain for awhile and had some AMAZING paella with rabbit. Rabbit is pretty common in Spain, and it's a type of meat eaten frequently in paella. So, when I got home, I wanted to recreate this dish to, you know, experience food heaven again. I gathered all the ingredients and the only thing left was rabbit. I went to Whole Foods (a fancy shmancy store in America that has unusual/upper-cut ingredients) hoping to find rabbit meat, and boy, did I ever find rabbit meat.

Clocking in at $11/pound, I had the option of buying an ENTIRE rabbit carcass. Previously frozen, I'd been told, since rabbit is really, really uncommonly eaten in America, or at least my part of America. So, this rabbit carcass was kept behind the meat case, and I was sort of shocked to find the whole little rabbit lying there, and I got very nervous as the thought of butchering it, and I wasn't thinking clearly, so my eyes only saw the $11 and not the 'per pound' part. Flustered, I asked the person behind the counter (who looked extremely unimpressed with me, adding to my anxiety over this purchase) to sell me the rabbit. They acquiesced, packaged it up, and put it on the scale to weigh it. Sticker was printed out, carelessly attached to the packet of rabbit, and handed over.

It was then that I realized I'd agreed to purchase $30 worth of rabbit.

My college budget was basically bankrupted by this purchase and the frustration didn't end there. It turns out that butchering meat, even for a small animal like a rabbit, is really hard. I won't go into the gruesome details, but if you don't have the right tools for breaking bones, you are basically dead in the water. Needless to say my preparation wasn't ideal and, to make matters worse, the paella itself came out all wrong. It was a complete failure and I swore never to buy rabbit again.

So, long story short, I'm using chicken instead of rabbit. If you can get ahold of rabbit and want to try it in this recipe, go for it! Just follow the same steps I do for the chicken. The great news about this recipe: If you can cut up veggies and meat and pour some ingredients into a bowl, this will be a really, really easy dish to make! Even if you don't care about the anime, this is a simple and delicious meal that is really satisfying. 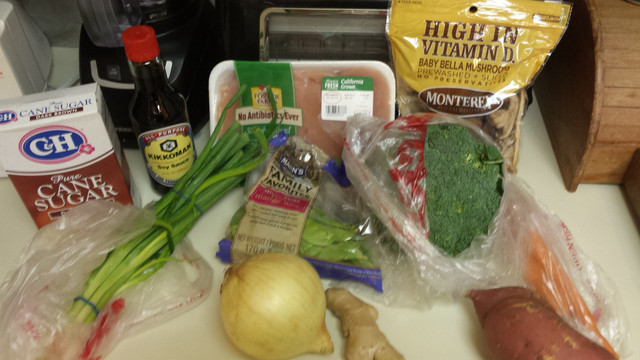 A note on the mushrooms and snow peas- I cut a few corners here and went for pre-cut/ packaged stuff to cut down on time. The exact amount of each vegetable doesn't have to be perfect at all, so you can add more or leave out parts of this recipe you don't like as much. So, when I say 1 bag of something, just add in the amount you'd like. For me, that was a whole bag :D
Make the Stir Fry
Start off by mincing the garlic and ginger root. You'll have to peel the ginger root and garlic, and then run your knife through everthing until it's small. 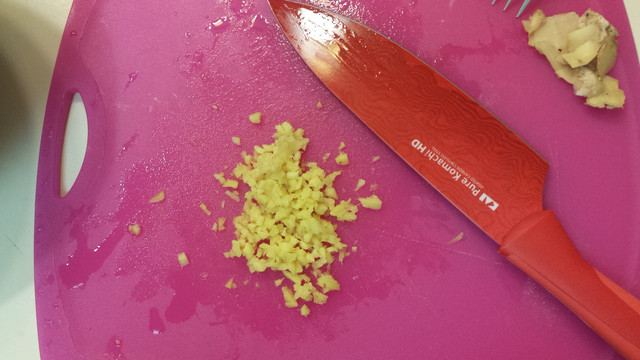 Then, throw garlic, ginger, soy sauce, sugar, and corn starch in a bowl and mix thoroughly. 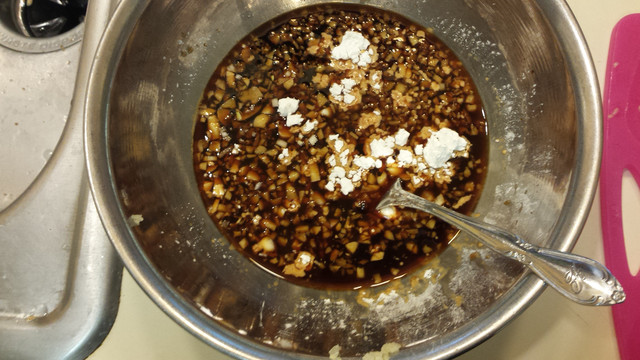 Take out chicken and cut into bite size pieces. 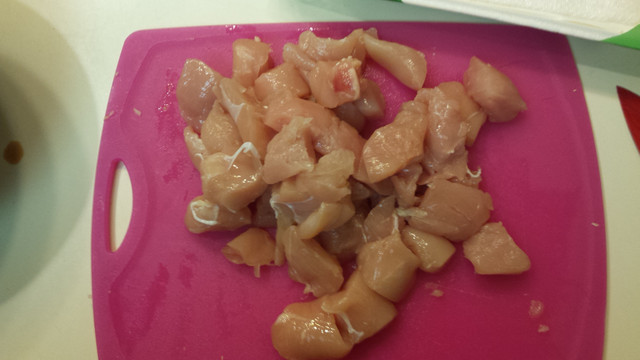 Then, put the chicken pieces in the marinade, toss to coat chicken, and set aside in the fridge.
With your potatoes, prick them all over with a fork. 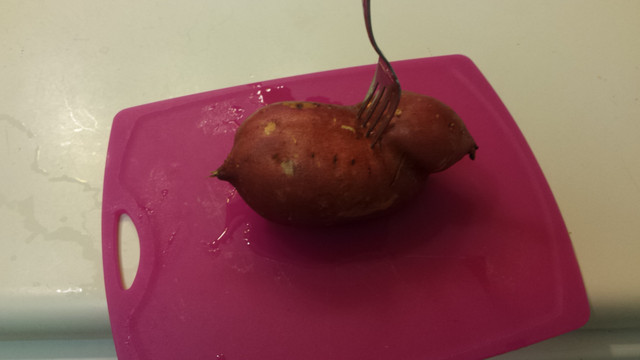 Then, stick it in the microwave and let it chill there until we're ready. I know Rem said she steamed her potatoes, but I don't have a steamer basket and you can microwave potatoes for less time with the same end result.

Next, start chopping your veggies. Cut the onion, broccoli, and carrots into bit size pieces. Make sure the carrots are on the thinner side- if they're too thick they'll take too long to cook through. 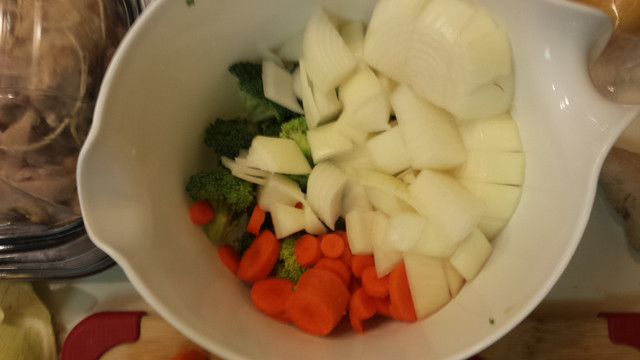 Heat a pan over medium heat, and drizzle the bottom with some olive oil. Let it heat up, and then dump all your veggies in, except for the snow peas. Let cook through for about five minutes, until vegetables are softened. 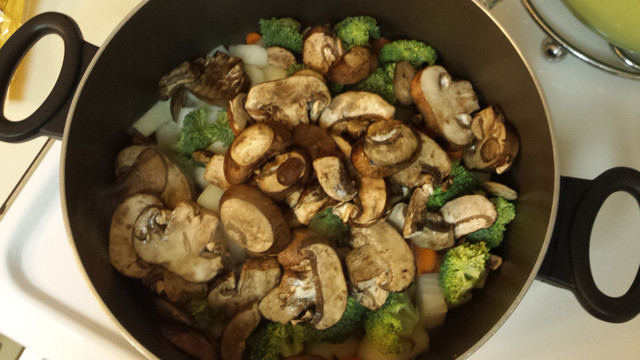 While those are cooking, put a pan over low heat and sprinkle your almonds out until they cover the bottom of the pan. Roast the nuts until they are fragrant and toasty looking. 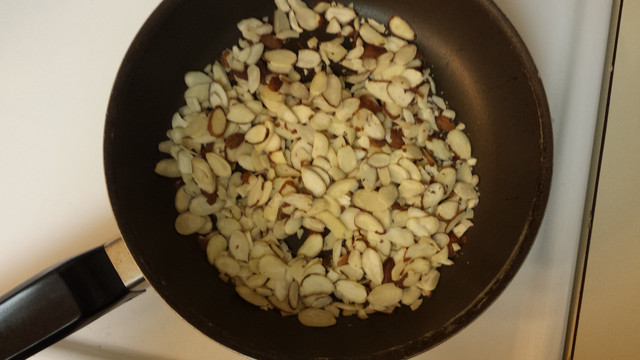 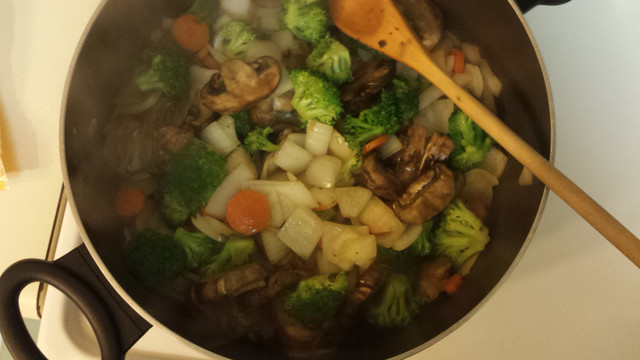 When the veggies are soft and onions look a bit transluscent, take them all out of the pan. Heat some olive oil again on the bottom and, when hot, put in the chicken pieces. Reserve the rest of the marinade! 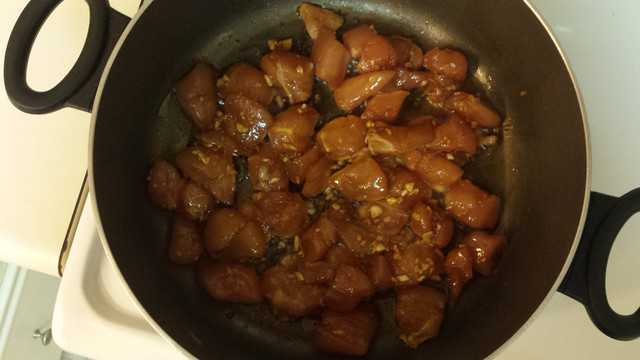 Let the chicken brown up on all sides. Continue shuffling the almonds around so they don't burn. Start the microwave for 9 minutes so the potato will be done around the same time as the stir fry. THAT'S RIGHT, FRIENDS!! You are 9 minutes away from Rem's home-cooked meal!

When the chicken is browned up on all sides, throw the veggies back in and drizzle everything with the rest of the marinade. Toss together and let cook about 7 minutes, or until chicken is throroughly cooked. Remember to keep tossing the almonds so they don't burn. 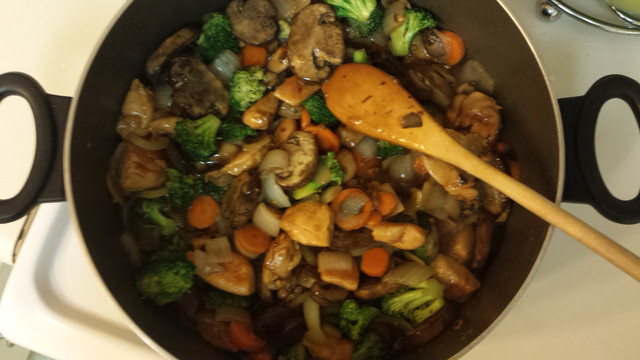 As soon as you decide it's ready, throw in the snow peas. I left mine whole- but I should have cut them in half just because they were so big. Learn from my mistakes. Stir through and let cook about 1 minute. 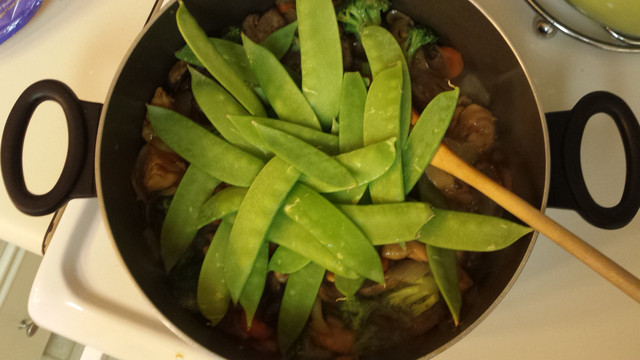 Take the potato out of the microwave and cut in half. Plate as desired. 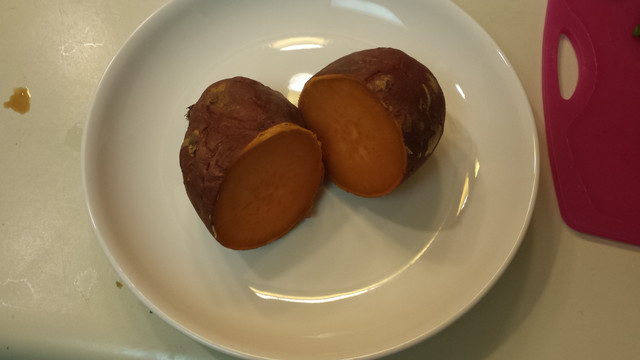 Finally, stir the nuts into the stir fry. 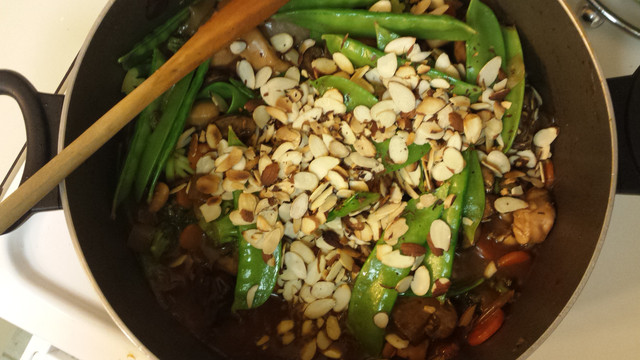 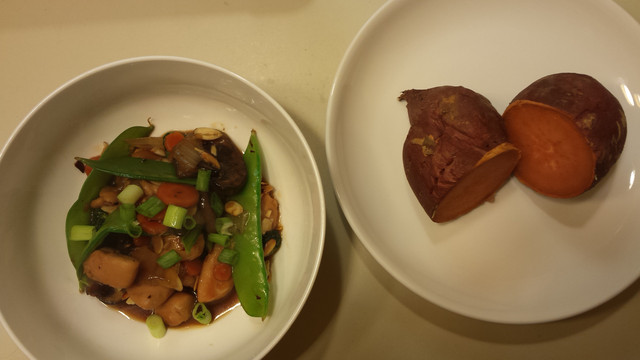 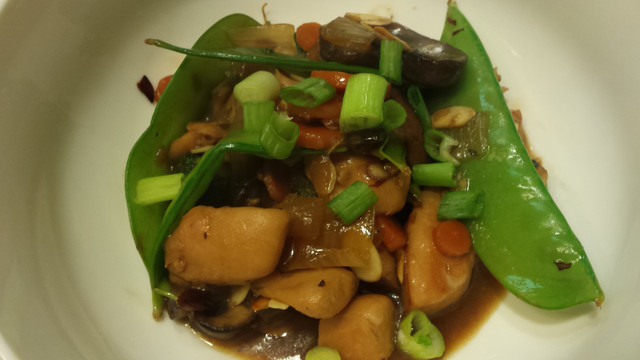 Didn't I say that would be easy? If you can cut things, this recipe is a cinch. Overall, I do recommend you use low-sodium soy sauce- if you use regular soy sauce it might be a touch too salty for your taste. Looking for something a little spicier? Add some red pepper flakes to the marinade! This dish is really fresh, really healthy, and tasty to boot. It makes a TON, so guaranteed you will have leftovers for a week if you're alone like me. Otherwise, it's a great dish to make for friends as you watch the next episode of Re:ZERO.

I hope you enjoyed this post! To check out more anime food recipes, visit my blog for more anime and manga themed food. If you have any questions or comments, leave them below! I recently got a twitter, so you can follow me at @yumpenguinsnack if you would like. My tumblr is yumpenguinsnacks.tumblr. com. Enjoy the food, and if you decide to recreate Rem's recipe, show me! I'd love to see :D

In case you missed it, check out our last dish: Failure? Four Layered Semi Freddo from "Food Wars!". What other famous anime dishes would you like to see Emily make on COOKING WITH ANIME?
Tags
re:zero, cooking with anime
« Previous Post
Dengeki Thanks Light Novel Readers With A Wet T-Shirt Contest Featuring Asuna, Index And More
Next Post »
Shirogumi Reveals SFX Secrets with "Shin Godzilla" 3DCG Featurette
Other Top News
17 Comments
Sort by: