A handy guide for knowing if your ship would survive in real life or not. 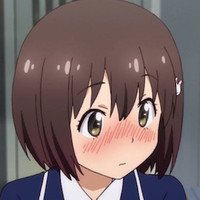 I've watched enough high school anime to have seen my fair share of anime crushes. You know the kind—lots of blushing, lots of teeny tiny steps towards confession followed by long sprints in the opposite direction, stuttering, frequent utterances of the word "nothing" in response to "what's wrong," etc. And, I must say, I'm generally a fan. Even in their most base forms, anime crushes tend to be fluffy and cute enough simply in terms of behavior displayed that watching them makes me grin—although, I confess, I have my times of frustration, too. But even as a overall fan of anime crushes, there are certain ones that stand out as being better than others and, fascinatingly (but not coincidentally), these crushes often evolve into being convincing romances.

I bring up this topic because the central relationship in the currently airing semi-romantic comedy, This Art Club Has a Problem!, strikes an intriguing balance between those anime crushes that are just cotton candy romance for my consumption and those that have enough depth to them to become emotionally involving beyond just the pleasure of watching cute characters blush at each other. The leads in This Art Club Has a Problem! (also known as Konobi, an abbreviation of its original Japanese title), Mizuki Usami and Subaru Uchimaki, occupy a weird space where the genre of their show, among other things, will likely never allow them to actually become a couple and yet still permits them enough space to feel something like a real relationship.

And so, the plan for tonight is to analyze the components of a good anime crush, using Usami and Uchimaki as our primary case study (although we'll weave in other examples as appropriate). Note that when I say "good," I'm using the term to differeniate between the majority of anime crushes, most of which are good because they are cute, and those that are a little bit more substantial. So, let's get crushing! 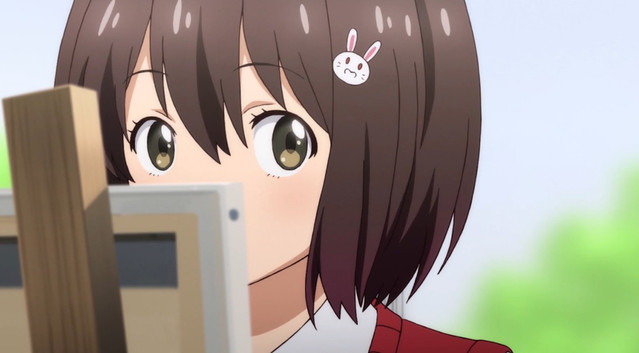 At the most basic level, the best anime crushes fundamentally understand that good crushes aren't just informed by physical attraction or a vague niceness that exudes from the other person, but by actual friendship. Usami and Uchimaki present a neat example of this because Usami's crush on her fellow art club member is initially presented to us as finding its genesis in Uchimaki being nice to a lost child. That's the kind of bland, directionless kindness that gets many protagonists their love interests (see: Nisekoi's Raku Ichijo or Sword Art Online's Kirito). However, although this is implied to be the start of Usami's crush on Uchimaki, Konobi undercuts this generic reason through its presentation of their current relationship. Watching the two of them interact and reading between the lines a little bit makes pretty clear that Uchimaki being "nice" isn't the sole or even primary reason for Usami's crush anymore. After all, Uchimaki's kindness towards Usami herself (as well as others) is intermittent at best.

So, if Usami doesn't like Uchimaki just because he's a "nice guy," and in fact finds herself oftimes repulsed by his 2D-loving ways, what is left to attract her to him? Watching the two of them interact with each other and their clubmates both inside and outside of the show's clearly demarcated romcom jokes, I think, provides the answer.

While it was Uchimaki's Kirito-like kindness that helped Usami get over her negative first impression of him, it's now a functional friendship that holds their relationship together and grounds Usami's infatuation. While the chaos of Collette's wild whimsies and the lazy idiosyncracies of their deadbeat president swirl around them, Usami and Uchimaki are often framed as reacting together to these comedic events, playing the straightman in unison. Perhaps more importantly, the two of them encounter a number of recognizable peaks and valleys in their relationship. Scenes like the two of them painting the mermaid on the pool floor in episode 5 or their pillow fight and subsequent reconciliation in episode 6 or any time they're just hanging out and talking are, although interwoven with jokes, recognizable moments of genuine friendship between the two of them—something that makes Usami's crush on Uchimaki feel far more realistic because it's balanced with just regular hanging out. 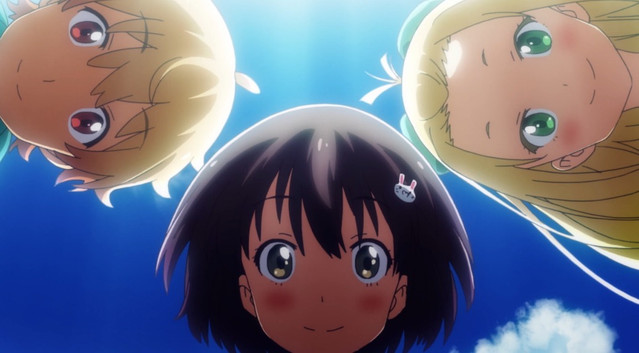 Underneath the bigger umbrella of friendship, there are two further subsets of crush characteristics that set good crushes apart from the rest. The first of these, and potentially the most difficult to portray effectively, is relational chemistry. In episode 6 of Konobi, the show's newest addition to the cast, transfer student Imari, actually points this out. "You're on the same wavelength," she observes. And she's right! Although much of it is framed through the show's jokes, there's a naturalistic feel to Uchimaki and Usami's back-and-forth banter. When the two of them are being used to make a joke together, their dialogue doesn't just fall back on generic lines, but actually draws comedy out of the way they interact with and respond to each other. This chemistry—which shows up on fairly convincing display in Nisekoi between Chitoge and Raku—also extends outside of jokes, as Konobi does a nice job of providing us with occasional genuine moments of connection between the two leads (like during the scene on the bridge at the end of episode 1).

The second subset, which also partially informs the quality of the banter between Uchimaki and Usami, is that they engage with each other as people. Although it's less an element in Konobi, don't mistake it being buried this late in the column for it being a lesser factor. Indeed, when I think of my favorite anime romances, this idea of truly listening and responding to the other as a person dominates. Toradora!'s Ryuji and Taiga are rightly held up as one of anime's best couples, and the bulk of their show is actually about them learning to do exactly this. Zen and Shirayuki from Snow White with the Red Hair are another quality example, as the two of them are constantly trying to communicate with and better understand each other. For Uchimaki and Usami, this is filtered through a lens that often casts their relationship in comedic terms—mutual tolerance of the other's quirks. For Usami, this is her attempts to relate to Uchimaki and his 2D obsession; for Uchimaki, it's his willingness to be friends with Usami despite her baffling (to him) 3D emotions and reactions. The majority of these moments within Konobi are framed as jokes, but it makes them no less emblematic of the warmth in this relationship. 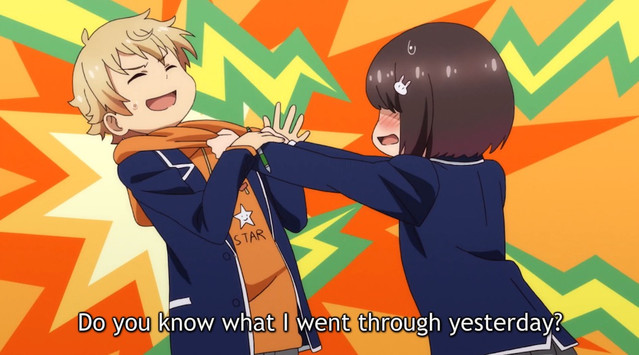 The paradox of the existence of all these important factors in Konobi's anime crush—friendship, chemistry, and mutual engagement—is that they exist within a show whose format is normally directly opposed to this kind of actual relationshipping in anime. The core joke of Usami's crush on Uchimaki is that she's infatuated with a guy who only loves 2D waifus, so the way their relationship has been structured within the show is inherently opposed to actual romantic development. Because of this, I'm convinced much of what I've talked about here, at least specifically with regards to Konobi, is the result of the excellent work of the anime adaptation's staff (many of whom also worked on My Teen Romantic Comedy SNAFU TOO!) in highlighting these qualities in Uchimaki and Usami's relationship. It's details like little bits of body language, eye contact, and atomospheric framing that lends a sense of genuineness to this relationship that could very easily be nothing more than a long running joke.

Outside of Konobi, these characteristics exist in other anime crushes in varying quantities (I've mentioned a few of my favorites already, but Kuromukuro is another good example of an anime crush to-be founded on solid relationship fundamentals), and while I think anime crushes like the one in this season's Momokuri, which basically rides solely on cuteness and fluff, are nice, I can't deny that it's the ones that feel as if they've been born out of real affection for another person, not just a character who just happens to be the object of attraction, are always going to be more fulfilling for me. And I think it's nice to see this happening in Konobi; it proves that good anime crushes can exist anywhere.

Whether you're watching This Art Club Has a Problem! or not, it's time for you to chime in! What makes your favorite anime crushes work? Is it friendship, chemistry, or something else entirely? Let your voice (and your love!) be heard in the comments! 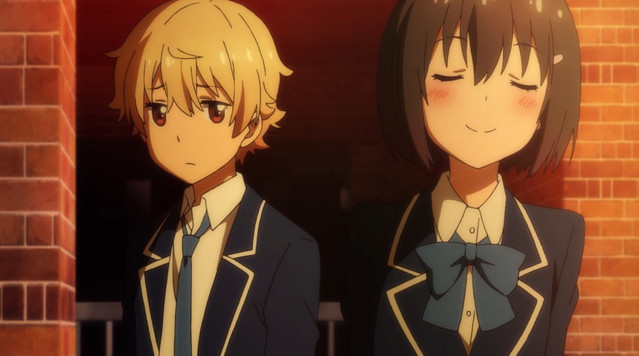 Tags
aniwords, this art club has a problem!, romance, analysis
« Previous Post
Catch Up with Plasmagica in "Show by Rock!! Short!!" Digest Video
Next Post »
"The Legend of Heroes: Trails of Cold Steel II" Dated for North America
Other Top News
12 Comments
Sort by: