It's all fun and games until someone ends up boiled in a pot... 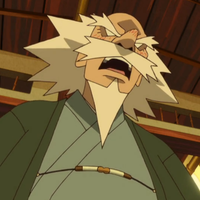 In anime, appearances can be deceiving. Often I begin watching a new series with certain expectations only to end up feeling bamboozled, as if a tanuki played a trick on me. “Cruising the Crunchy-Catalog” is here to help. Each week we provide additional information and cultural context to help fans decide whether or not they'd like to take an unknown series for a test drive. 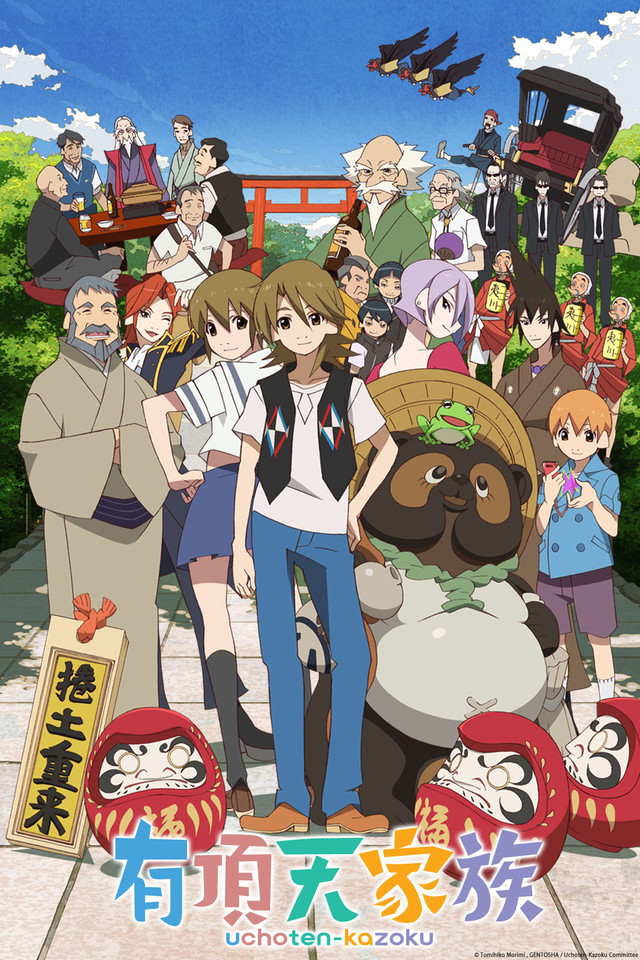 The Eccentric Family is a 2013 TV anime with direction by Masayuki Yoshihara and animation by P.A. Works (SHIROBAKO, Charlotte). Based on the 2007 Uchoten Kazoku novel by Tomihiko Morimi, the series posits a world where tengu, tanuki, and other supernatural creatures co-exist with humans in modern Japan. Crunchyroll describes The Eccentric Family as follows: 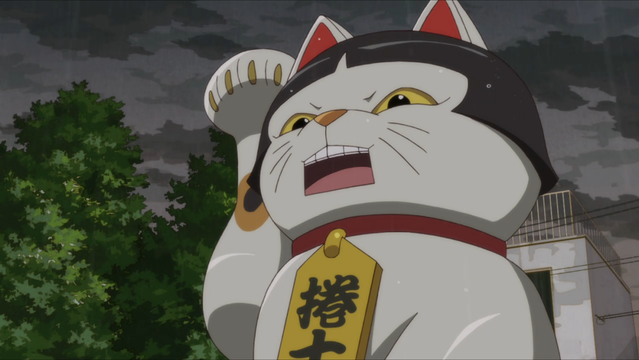 “In Kyoto, humans, tanuki, and tengu live side-by-side. The Shimogamo family lives in Shimogamo Jinja’s Tadasu no Mori. The father, Soichiro, used to be the head of tanuki society, but without warning one day he was made into tanuki stew, and no one knows how it happened. He left four sons behind. They all live happily with their mother. After taking care of Professor Akadama, the Shimogamo family suddenly finds itself in a desperate fix. Will the truth behind how their father got stewed be revealed?! What does fate have in store for this strongly bonded family?!” 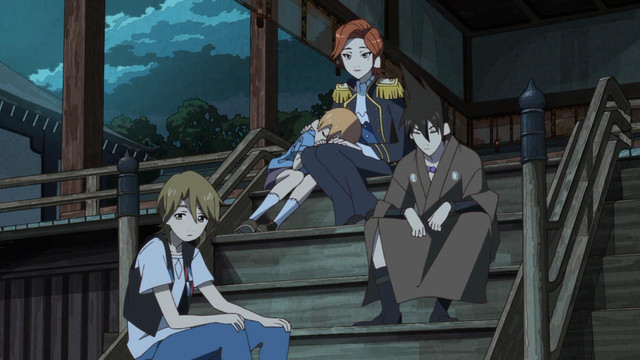 This is an excellent description that cuts to the heart of what The Eccentric Family about, but a little background information might be helpful for viewers who aren't already familiar with the fables and legends that this series calls upon. 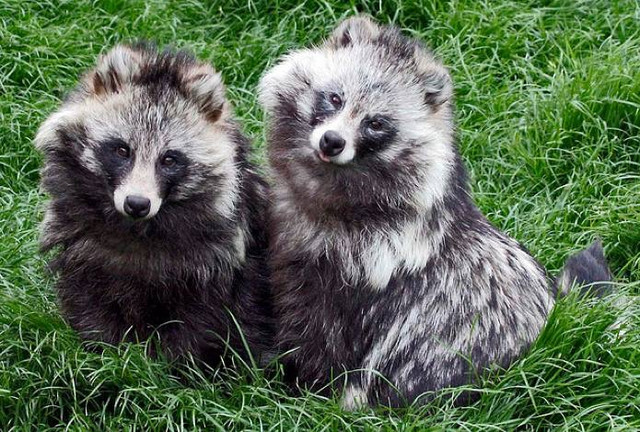 Of Tanuki, Tengu, and the Seven Lucky Gods.

In real life, tanuki are a species of Japanese racoon dogs. Racoon dogs are members of the Canidae family that are native to East Asia. Tanuki are sometimes confused with badgers or racoons, to which they bear a superficial resemblance, but tanuki are not closely related to either of these other species of animals. 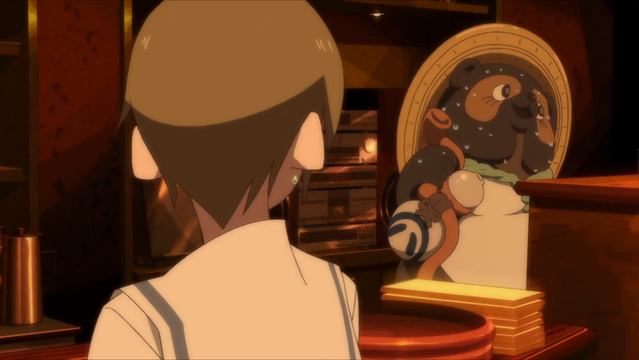 In Japanese folklore, tanuki are as intelligent as human beings, and they have a penchant for magical transformations and playing pranks on unsuspecting people. Magical tanuki appear all over Japanese pop culture, including examples like the 1994 Studio Ghibli film Pom Poko and the “tanooki suit” in the Super Mario Bros. video games, which grants Mario the power to fly and transform into a statue. 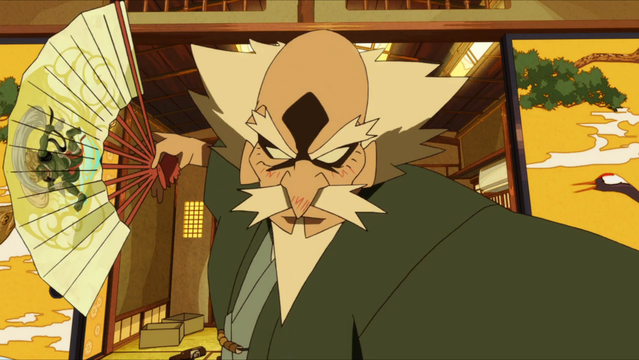 Tengu are long-nosed, flying goblins that purportedly dwell in the mountains of Japan. Tengu are known for their superb swordsmanship skills. According to legend, the famous historical warrior Minamoto no Yoshitsune learned the art of the sword from the tengu. Tengu also have the ability to summon foul weather and powerful winds, a skill that Professor Akadama demonstrates with his Fujin Raijin fan. 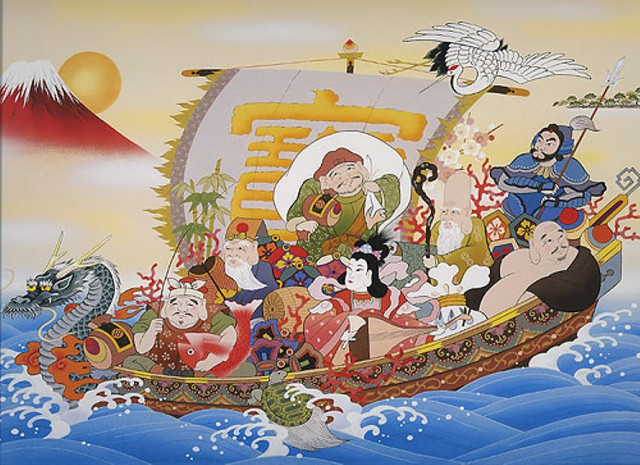 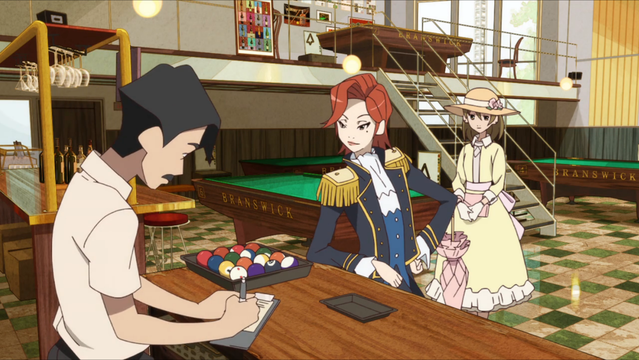 One interesting aspect of The Eccentric Family is that two of the main characters – Yasaburo and his mother – freely change genders while using their transformation powers to imitate humans. Yasaburo sometimes adopts a stereotypically feminine appearance in a sailor fuku or a frilly dress, while his mother assumes the form of a handsome prince when hustling people at pool. In either case, their gender-fluidity is presented as no big deal, just part and parcel with the everyday wonderful life of the tanuki. 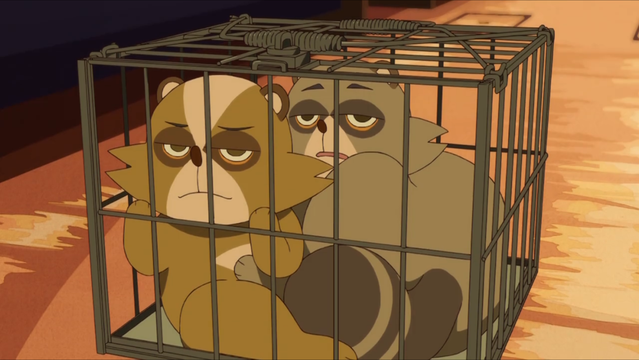 Although tanuki are often depicted as carefree and the antics of Yasaburo, his family, and their rivals generally don't rise above the level of a good-spirited prank war, the story takes a turn for the dark and conspiratorial in the second half of The Eccentric Family, to the point where it practically becomes Tanuki Hamlet. I won't spoil the resolution here, but I'm happy to say that when the going gets tough, the tough get foolish. 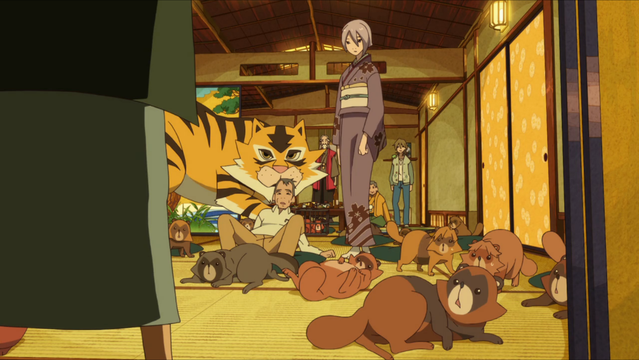 Crunchyroll currently streams The Eccentric Family in 63 countries in the original Japanese with subtitles in English, Spanish, Latin American Spanish, French, and Portuguese. The series is also available on Bluray from NIS America. The Eccentric Family is a perfect fit for any anime fan who's looking for a story about a family pulling together in the face of great misfortune, wrapped in a wry sense of humor, seasoned with a dash of magical realism, and sprinkled throughout with a strangely optimistic fatalism. 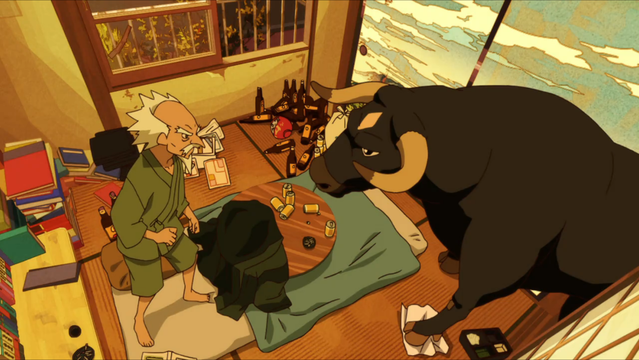 Special thanks go to Twitter's resident Spicy Anime Dad, Hazukari (@hazukari), for suggesting this week's selection for “Cruising the Crunchy-Catalog”.

Is there a series in Crunchyroll's catalog that you think needs some more love and attention? Please send in your suggestions to [email protected]. Your pick could inspire the next installment of “Cruising the Crunchy-Catalog”!