Anime vs. Real Life is taking a closer look at the setting of Love Live! Sunshine!! this week. 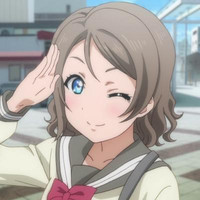 This week, Anime vs. Real Life is taking a look at the real life locations of the school idol anime, Love Live! Sunshine!!. Follow the school idols of Uranohoshi Girls’ High School around the cities of Uchiura and Numazu on the Izu Peninsula.

As I already mentioned in my last article about the setting of Love Live! Sunshine!!, the original Love Live! was set in the bustling metropolis of Tokyo – however, the spin-off is now taking place in a more rural area of Japan, on the western shore of the Izu Peninsula to be precise. Most of the time, the show is set in the small seaside town of Uchiura in Suruga Bay, but the nearby port town Numazu also often serves as a setting for the show. This holds especially true for the third episode of the show, in which Chika, You and Riko tried to convince people in Numazu, to check out their first performance as school idols. Compared to the rather small village of Uchiura, Numazu gives one the impression of being a big city, with its roughly 200000 citizens (which really is not that much for Japan). So let’s get right to it – this article is quite long this time, with over fifty comparison shots, and will focus on the second and third episode of Love Live! Sunshine!!.

Chika is just making sure that Riko is not wearing her swimsuit underneath again – nothing to see here, except for this perfectly recreated anime pier.

The yellowish building on the right of the picture is a Japanese style hotel, called Izu Mitohama Shotokan Ryokan, and in the back is the Izu Mito Sea Paradise.

Chika herself also lives in an actual inn, called Yasudaya Ryokan. The northern part of the Izu Peninsula in general, is quite famous for its many hot springs due to several volcanoes in the area. That’s why there is also a good amount of them featured in the show. These hotels can definitely expect a rise in anime fans staying overnight – I’m even considering going back there myself the next time I’m in Japan.

You might have already noticed it, but the amount of detail the creators of Love Live! Sunshine!! have put into recreating the area, is really something else. The trees on both sides look exactly the same in the anime and in real life, and that’s also true for the mountain peaks in the background.

I already mentioned the awesome bus driver from Uchiura in my last article, because otherwise I had not been able to take that picture.

A lot of buses in the area are decorated with Love Live! Sunshine!! promos.

And we’re finally in Numazu. In episode three, Chika, You, and Riko decide to travel to Numazu Station, in order to do some promotion for their first performance as an idol group, since Mari prompted them to fill the school’s gym with a big enough audience, or otherwise the club would get shut down for good. Since Uchiura itself is just a small town, Numazu is the perfect place to invite a few more people for the show, since the cities are only about a 40-minute bus ride apart from each other.

That being said, if you ever want to visit Numazu and Uchiura yourself, it may not be the easiest location to reach, but it certainly is doable. Going from Tokyo, you could take the Shinkansen to either Mishima, or Atami, and then get on a local train to Numazu (about 1:30h). You could also take the cheaper alternative, and take a local train, which in turn is a bit slower (about 2:30h). However, going from Numazu to Uchiura then, is still a 40-minute bus ride. By the way, the anime only shows the north side of Numazu Station (picture below), but to get to Uchiura, you actually need to take a bus from platform number eight on the south side – so don’t get as confused as I was, when I was not able to find the buses running to Uchiura.

The small two-storied building in the background is a Koban. These are basically mini police stations which can be found in practically every neighborhood of Japan.

Riko’s heart probably skipped a beat, while watching this scene.

The cinema is called Cinema Sunshine. Coincidence? I think not!

I think it’s pretty clear now, that even the slightest detail in real life, also found its way into the anime. Numazu Station was so carefully recreated in the anime, that I was really baffled. I’m certain that I spent a good one and a half hours there, if not more, trying to find all the different spots and take pictures of them.

Zuramaru! Numazu Station really got a lot of shots in the third episode.

Unacceptable! Why are the information boards not the same color in the anime and in real life?

These things are called Shishi-odoshi, and they are basically small bamboo water fountains meant to scare away animals. That particular one was located right in front of Chika’s house.

That scene is already back in Uchiura.

Awa Island in the background.

That’s the road up to Uranohoshi Girls’ High School. The school is located on top of the hill, and that’s also where Aquors first performance as school idols took place.

Now, let’s hear it from you! Do you think that the creators of Love Live! Sunshine!! have put enough effort into recreating the anime versions of Uchiura and Numazu? And how are you liking the new school idols so far? Comment below!