Was diverging from the manga's series composition the right decision? 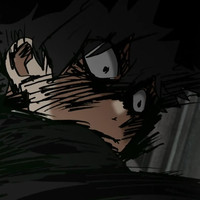 A reminder: I’d recommend checking out Part 1 and Part 2 of my Mob Psycho 100: Source-Adaptation Differences write-ups before reading this one. In doing so, you’ll have a better idea of the angle that I am approaching Mob Psycho 100’s anime adaptation from.

This week I’ll be looking at episodes 6 through 8 of Mob Psycho 100’s anime. I’ve taken a more structural angle with my analysis this week in order to explore how the amount of material covered can impact an adaptation’s creative vision. 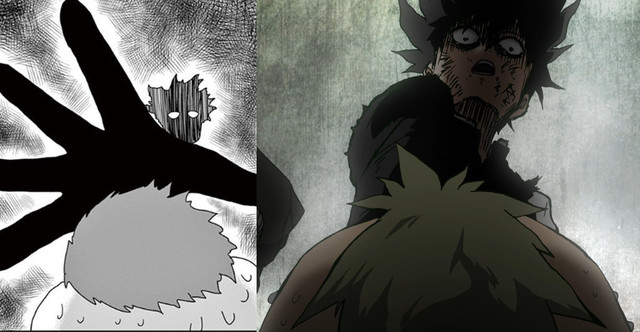 Episode 6 – Discord ~To Become One~ 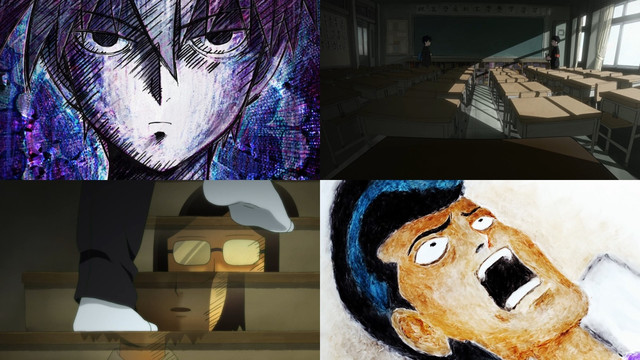 When faced with more material than allotted airtime, what would you do? Anime producers often experience this dilemma when adapting popular manga and novels. Whether it’s condensing, skipping, or even re-writing material, compromises have to be made.

Although animation director Yoshimichi Kameda has taken an experimental approach to the animation in the Mob Psycho 100’s anime adaptation, his most significant contributions always coincide with the episodes that cover less material. Episodes 1, 5 and 8 all correspond to only a couple chapters in the manga – chapters with less dialogue and more action.

So why is this noteworthy? In my view, I feel series director Yuzuru Tachikawa’s vision for Mob Psycho 100’s anime adaptation was to enhance key aspects of its art and visual direction, but not at the cost of ONE’s story. While Kameda’s animation team have never been limited by the anime’s scope, they have been by its structure; when there’s more written content to adapt, there’s less of an emphasis on motion and expression. This stands to reason, as ultimately Mob Psycho 100 is a commercial anime which engages its viewers through its story and characters. If an aspect had to be cut in the process, it probably wouldn’t be either of these. Thankfully, Kameda’s production ethos behind Mob Psycho 100 allows even the denser episodes to maintain a high standard of artistry. 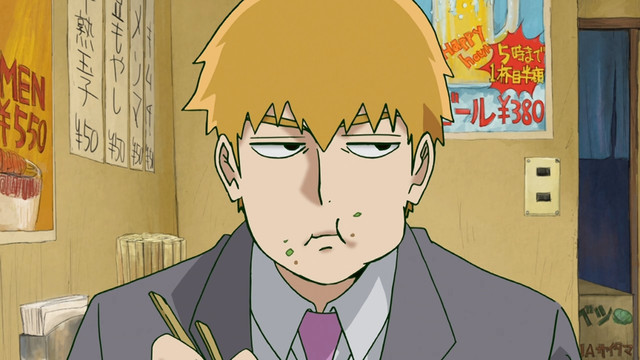 In the case of episodes 6 and 7, the manga contained more material than the staff were able to reasonably condense into two episodes. As a result, the anime’s plot chronology did not mirror the manga’s – with some events cut out of the anime entirely. The “Psycho-helm cult” meeting in the manga was one such scene that did not make its way into these episodes of the anime. This was a noteworthy scene in my view, as it explored the social impact Mob’s battles with Dimple and Teru had on the public.

From reading the corresponding chapters of the manga, I feel the anime adaptation of Mob Psycho 100 had a narrower scope during episodes 6 and 7. While the manga raised the public perception of Mob and Ritsu’s actions as an additional narrative thread, the anime focused specifically on Ritsu’s inferiority complex and the student council subplot. Given how much material there was to adapt, I can understand the decision to focus on only the most crucial plot points.

With that said, Tachikawa did take some creative liberties to trim down content. Lengthier scenes in the manga such as the uprising of the rival school gangs were spliced into a series of montages that introduced each leader. A lot of dialogue was cut in the process, but the intent behind these scenes remained. As these thugs were comical, minor characters, nothing important was lost by Tachikawa taking an approach more befitting of a visual medium like anime. The only regrettable thing is that more sections of episodes 6 and 7 weren’t adapted with this philosophy in mind. 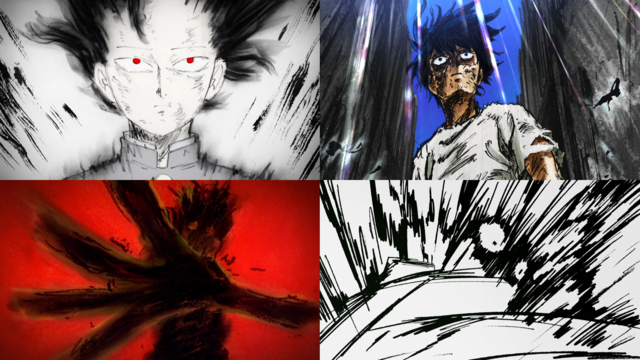 Changing gears, we now come to the polar opposite of the previous episodes; little material to adapt but plenty of airtime to fill. Essentially, a paradise for Kameda.

Episode 8 of the anime corresponds to only a couple chapters in the manga that detail Ritsu’s confrontation and the heated battle between Mob and Koyama. There are few plot developments and most of the dialogue is exchanged during the fight sequences, which granted Kameda plenty of breathing room. This was truly an episode defined by the raw power animation as a medium grants.

If it wasn’t already clear from my previous write-ups, it should be now: Kameda has breathed new life into Mob Psycho 100. While I’m a fan of ONE’s character designs and unpolished style of artwork, he does struggle when it comes to depicting motion. The fight sequences in Mob Psycho 100’s source manga are intense by virtue of their storyboards, but there’s a lack of panels that depict in-between movement. This is why, in my view, Kameda was a perfect fit as Mob Psycho 100’s animation director, as his approach is quite counter to the limited animation model; Kameda is all about displaying dynamic motion and the energy it exudes.

I hardly recognized the fight between Mob and Koyama in the anime, as Kameda and his team gave it a complete makeover. This is most notable in the case of veteran animator, Yutaka Nakamura's, cut of Mob's "Telekinetic Helix". The sense of weightlessness conveyed by the dynamic camera movement during the aerial segment, followed by the accelerated impact of the finishing blow are (no pun intended) groundbreaking feats of animation.

Additionally, I could feel the savageness of Mob and Koyama’s frenzy from how free-form their character models became as the fight progressed. The distinct touch of rough pencil sketches and thick shading during impact frames only magnified this primal display of psychic power. Kameda was not afraid to try out experimental or even abstract styles of animation in what was otherwise a rather typical shonen battle – and I just have to respect that. To sum it all up: this episode felt alive. 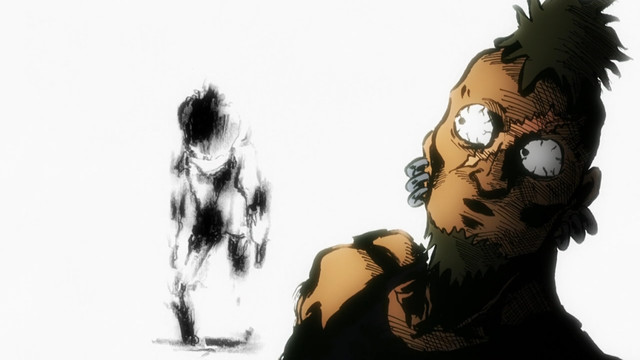 Note: I am going to postpone Part 4 of this article series till October 2nd so that I am able to cover episodes 9 through 12 of Mob Psycho 100. Look forward to it then!

How did you feel the material in episodes 6 and 7 was adapted? What about the fight between Mob and Koyama in episode 8? Let us know your thoughts in the comments below!