FEATURE: Why It Works: The Chromatic Battle of Koichi and Kira

Today we're returning to JoJo once again, as we explore the distinctive color work of Kira's near-death experience! 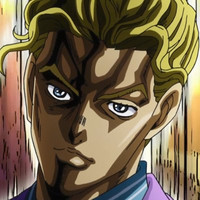 JoJo’s Bizarre Adventure had a very serious battle recently. While I was busy rambling about dead dogs or something, the show built up to its first major confrontation between Kira and the core heroes of Diamond is Unbreakable. Stands were summoned, blood was shed, and nearly half the cast met their ugly end as Deadly Queen and Heart Attack faced off against Koichi and Jotaro’s powers. And appropriately for such a major fight, this was one of the most visually compelling episodes the show has pulled off in months. So let’s dive into that episode, and highlight just a couple of that battle’s most impressive tricks. 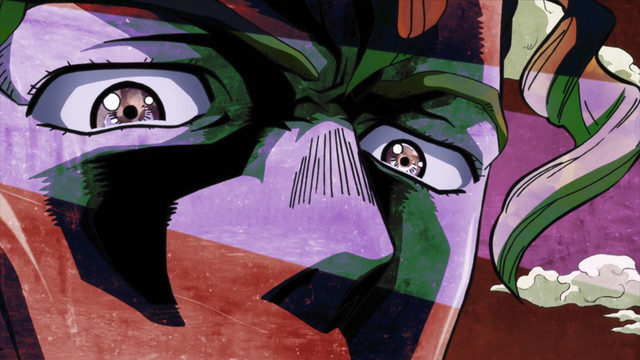 First off, while JoJo has taken care to imbue every episode with some of the palette-shifting freeze-frames that have defined the show’s style from the beginning, arresting compositions in its standard visual mode have been in somewhat short supply. They certainly still exist - the fisheye environmental shots are one consistent example, but specific episodes have also used unique environmental details like street graffiti to add flavor and complement their theming (note how the street graffiti both mirrors the physical beats of that confrontation and is littered with slang terms for money).

The battle with Heart Attack offers several compelling traditional compositions, starting off with this striking shot highlighting Koichi and Kira through the ruins of the tailoring store. This shot not only focuses the eye on the contrast between the two, but it also emphasizes both their relative size and clear isolation. Later on, standout shots are composed more for beauty than inferring information; I love the contrast of Koichi’s clear blue eyes against the blood in this one, and the way Kira is gracefully framed against the contrasting lines of the sidewalk here. Lastly, I appreciate how the episode’s finale sequence shifted its visual modes to accent its genre turns - when the JoJo crew is racing to find the killer and discover his grim final actions, the Cinderella studio is presented in off-kilter grayscale, Kira’s blood and clothes highlighted as if they were key evidence at a murder scene. 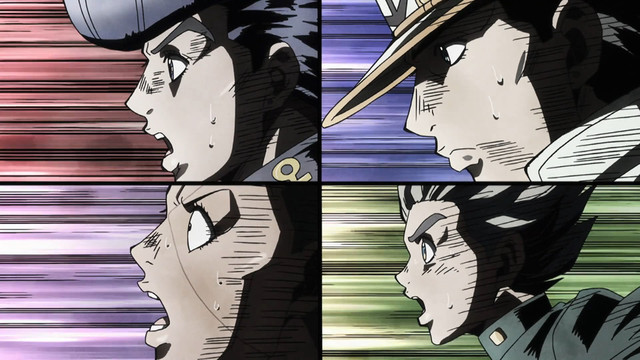 But JoJo always returns to its palette shifts, and here, those frames actually tell the story of the battle itself. The fight begins with Kira ascendant - having already defeated Jotaro and possessing a Stand with far more obvious power than Koichi’s, he’s breaking from his low-risk lifestyle to briefly relish in victory. In light of this, the palette shifts throughout this section are colored to emphasize his power.

Kira’s defining colors are the bright yellow of his hair and the muted pink of his suit. In light of this, when Kira is in control, the whole world is stained his colors. Looking down on his diminutive opponent, the background adopts Kira’s bright yellow, all other details fading save his sneering face. As Kira’s victory becomes certain and his power grows, the closeups on his face again mimic his color profile - his face shifts to the striking purple of his suit. 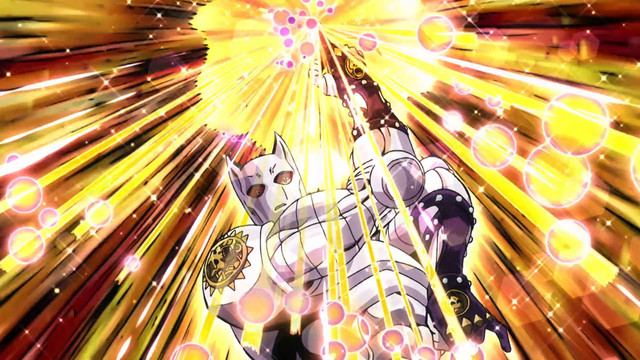 Even Kira’s key attacks are themed to match his color scheme. When Deadly Queen raises its hand for the killing strike, the summoning of that power is evoked first through blinding yellow, and then through striking purple. Kira’s power is made clear to the audience through the way his signifying colors cover the screen whenever he is dominant. Because we are naturally inclined to identify characters with their consistent visual markers, we can feel his overwhelming power through his visual signifiers even if it isn’t clear through the narrative beats.

Of course, Kira doesn’t actually win this battle. Not only does Koichi put up an unexpectedly strong fight, but his victory is stolen first by Jotaro’s unexpected revival, and then by a rescue from Josuke and Okuyasu. Early on in the fight, Koichi is visually tied to more subdued colors, matching his grey hair (a far more distinctive visual signifier than his clothes, which are the same clothes worn by his classmates, and thus useless as a distinct symbol). In light of that, it’s not surprising that Kira’s moments of surprise and defeat are marked by similar grey colors, emphasizing the way he is being taken out of his element. 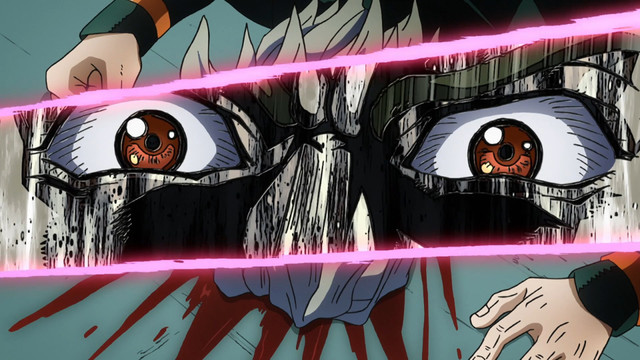 By the end of the episode, Kira’s defeat is nearly complete, and thus his palette shifts become even more stark and desperate. The show further bleaches his skin while leaving his hair yellow, resulting in an overall sickly complexion that conveys none of the power and confidence of his earlier shots. Framing the world in your primary colors is a statement of power - when your base colors return but your own pallor is pale and unwell, the frame is clearly indicating a total loss of control. By tying Kira’s fortunes in battle to the actual colors of his world, Diamond is Unbreakable is able to make both his power and defeat tangible in a visceral, unspoken sense.