FEATURE: From Zero to One – “Love Live! Sunshine!!”

How does the younger sister of the superstar stand out? 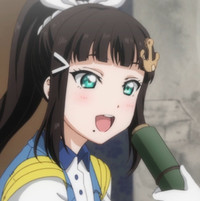 Unless you’ve been living under a rock for the past five years, you’ve probably heard the name Love Live! School Idol Project somewhere before. Love it or hate it, the multimedia idol franchise is an international phenomena – a feat that few idol franchises in Japan have achieved. Beginning with only music videos, the franchise exploded in popularity when the animation studio Sunrise produced an anime in 2013. Since then, there have been countless music CDs, manga, novels and game adaptations that follow the stories of the now iconic group of nine high-school idols, called μ's (pronounced “Muse”).

For many Love Live! fans, the girls of μ's were a fun, likable and even relatable bunch. Being able to cheer on your favorite girl between the anime, seiyuu concerts and the mobile game, Love Live! School Idol Festival, was a large part of being a fan. However, when Lantis and Sunrise introduced a new idol group called Aqours (pronounced "Aquas") and announced another anime called Love Live! Sunshine!!, there were mixed sentiments in the community. Some fans were sad to see an anime that didn't star μ's while others wondered whether Aqours could measure up to their predecessors. 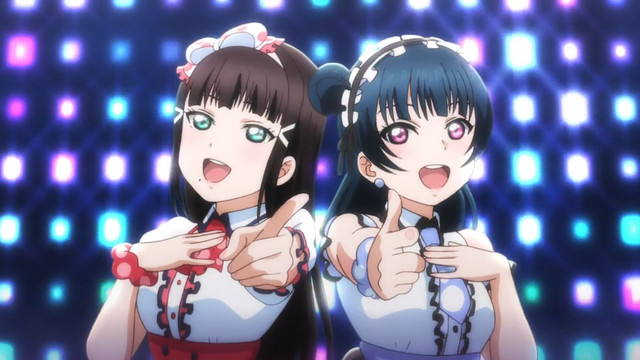 With episode 13 of Love Live! Sunshine!! drawing to a close, I can safely say that any doubts I had about this franchise reboot were erased. Although Love Live! Sunshine!! was keen on having its audience remember μ's through bits of fan service, it built upon that familiar foundation and ended up as a stronger work as a result.

From the get-go, Love Live! Sunshine!! treads upon familiar ground. The protagonist, Chika, is an enthusiastic girl living in the small, seaside town of Numazu who wants to start her own school idol group. Unfortunately, she is turned down immediately by the student council president, Dia, who doesn’t like idols. Discouraged but not disillusioned, Chika begins recruiting members to form Aqours.

Sound familiar? Love Live! Sunshine!! was not shy about adopting a plot structure that was similar to the original series – in some cases, outright mirroring events that happened to μ's. While some may feel this was a cut & paste attempt on Sunrise’s part to evoke nostalgia, I found these nods cleverly played into the narrative of the small-town Aqours forging an identity separate from μ's. 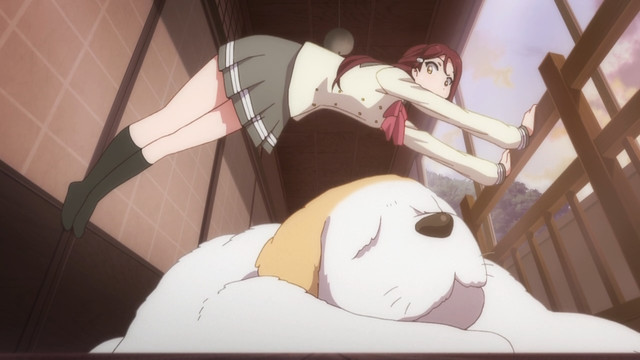 A large part of what made Love! Live Sunshine!! so successful in this regard was that the anime knew how to establish an audience expectation and play around with it. Perhaps the best example of this was how Love Live! Sunshine!! handled the character Dia Kurosawa. As previously mentioned, Dia is the student council president of Uranohoshi Girls' Academy who is initially established as a roadblock to Chika’s goal. In many respects, Dia’s role in Love Live! Sunshine!! parallels that of Eli Ayase’s from the original series (heck, both girls even have cute little sisters that think the world of their big sisters).

What differentiates Dia from Eli is that while Dia is also strict and bossy, the cracks in her armor are easily apparent. As early as the second episode, Dia clumsily lets it slip that she is a fan of μ's with a wealth of idol knowledge that would make even Nico Yazawa jealous. The irony here is that Dia is a closet idol fan, but because of her traditional upbringing she believes she has to put that aside to play the responsible student council president.

By characterizing Dia’s blunders in a comical way, she comes across as a less antagonizing force than Eli was before she joined μ's. Additionally, we see different sides of Dia’s personality in the episodes leading up to her joining Aqours. Dia displays kindness when consoling her younger sister, Ruby, and a more laid-back attitude when around her longtime friends, Kanan and Mari. As a result, although Dia initially seems unlikable, her portrayal creates less conflict and makes it easier for viewers to emphasize with her situation. 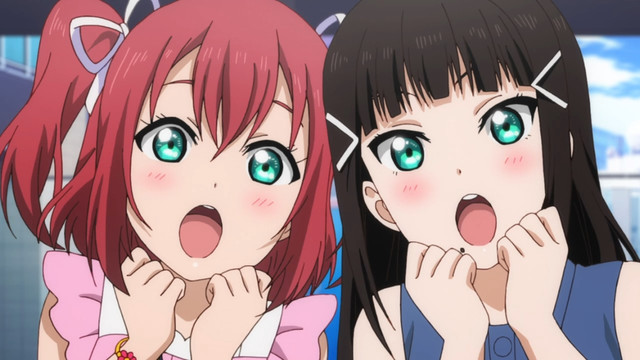 The Kurosawa sisters are a gem

In general, Love Live! Sunshine!! takes fewer shortcuts with its drama, which allows us to better understand Aqours’ position as underdogs. Chika and the others fail to impress even a single person in Tokyo and are devastated by the outcome. Aqours may have been able to light up the stage in the small pond of Numazu, but in the big ocean of Tokyo, they’re only one fish in the sea.

It’s a potent display of emotion to see the girls frustrated and in tears from their performance – but they embrace, talk things over and pick themselves right back up. The members of Aqours realize that emulating the success of μ's was what initially drove them forward, but they needed to walk their own path; even if that path was simply going from zero to one vote.

This is why I believe the frequent nods to μ's – whether a familiar episode plotline or locale – were effective in the long run. Although Love Live! Sunshine!! tended to glorify μ's and their achievements, we have to keep in mind that from Chika and the others' perspectives, μ's were their inspirations. Conditioning the audience to believe that Love Live! Sunshine!! would end up as a carbon copy of its predecessor, only to use that as the reason for Aqours' soul search was a clever move. 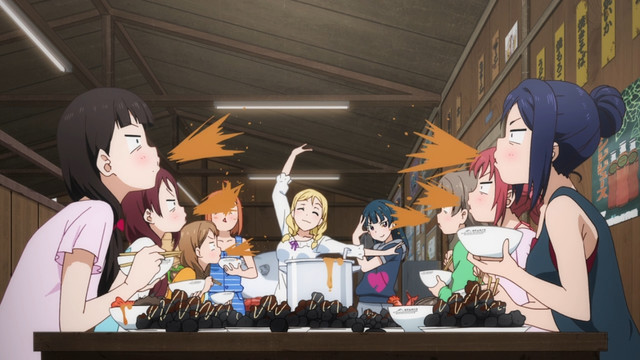 What truly holds Love Live! Sunshine!! together for me are the bonds that the members of Aqours forge with one another through their shared experiences. While Aqours are slowly working towards their goal of participating in the Love Live! competition, the girls have moments where all they do is goof around. Whether it's making low-budget documentaries, getting lost in Tokyo or dunking on Yohane, their charming personalities come to light. Scenes like these are shown as is – moments highlighting playful exchanges and banter between the girls. At times I even forgot that I was watching an idol anime because Aqours’ activities were so lighthearted and comical!

The clowns of the group, Yohane and Mari, bring hilarious and often unpredictable antics to the table – ensuring there's never a dull moment around. Chika and You impart a level of enthusiasm that glues the group together, while Dia abandons any notion of proper etiquette when money or idols are involved. Then there's Hanamaru who is very, very, very technologically challenged (and I'll leave it at that). As a result, teambuilding in Love Live! Sunshine!! feels like an honest consequence of the group’s diverse personalities converging in one place.

Likewise, some of the most touching scenes in the series are the exchanges between Chika and Riko. From their initial meeting, Chika was drawn in by Riko – a transfer student from Tokyo with a mature aura. Riko, a normally quiet and reserved girl, is able to easily express herself thanks to Chika’s upbeat and nonjudgmental nature. The two girls quickly establish a close and intimate relationship where they openly confide in each other. 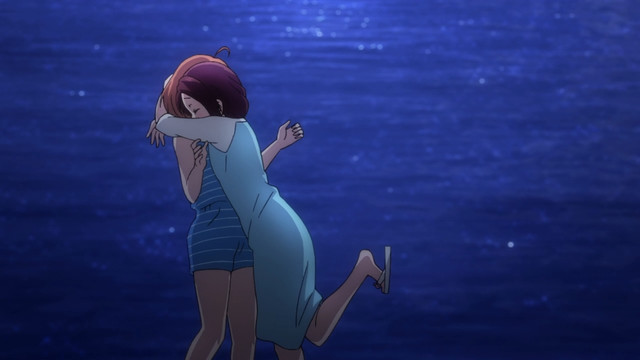 Chika and Riko deserve to find happiness together

Throughout Love Live! Sunshine!!, Riko experiences regret over abandoning piano to become a school idol. She receives a notice for a competition but discards it so as to not jeopardize the group’s success. However, Chika encourages Riko to pursue what she’s truly passionate about, as that should come first. Her selflessness causes Riko to break down into tears and in a beautiful declaration of love, the two girls embrace.

What I loved about Chika and Riko’s relationship was how open Love Live! Sunshine!! was about it and the positive precadent it set for the franchise. Typically, idol anime shy away from depicting romance in their narratives – often as an unfortunate byproduct of how idols are objectified in the culture. However, Love Live! Sunshine!! wasn't afraid to depict romantic intimacy between two girls. The franchise has always contained yuri undertones (especially in its print media), but it's never taken steps further than that.

At the end of the day, Love Live! Sunshine!! is still a commercial anime meant to promote idol culture, much like its predecessor. However, its approach is more grounded and the members of Aqours are better established as regular girls and individuals with their own strengths and quirks; they all experience anxiety and hardship, but they work through them with collective energy and determination that just brings a smile to my face. 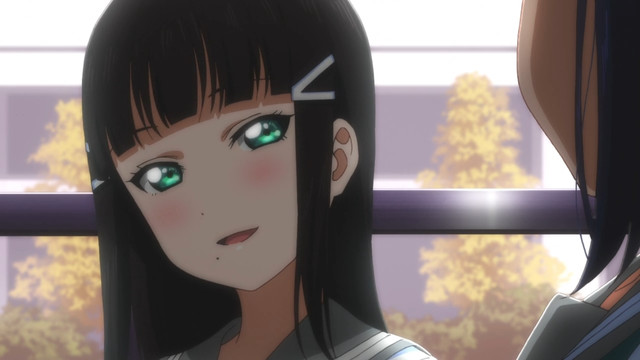 Dia's smile is the best, however

In closing, it isn’t about whether one prefers μ's to Aqours or vice versa, but how one is able to engage with their respective anime and related media. For me, I preferred the direction of Love Live! Sunshine!!, but perhaps you, the reader, had a different impression? Let us know in the comments below and be sure to rep your favorite Aqours girl while you're at it!

Tags
love live!, love live! sunshine!!, sunrise, aqours, μ's
« Previous Post
Japanese Fans Pick The Manga Series That Were Improved By Being Adapted Into Anime
Next Post »
Massive Goods Teams Up With Pantheon For Omnibus Of Canadian-Set "My Brother's Husband"
Other Top News
16 Comments
Sort by: