FEATURE: Why It Works: A Brief Plea For Thunderbolt Fantasy

With the season ending, it's time to take a quick look at one of this season's most overlooked attractions! 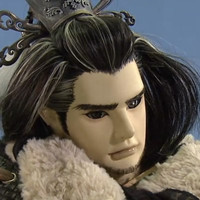 The summer season’s coming to a close this week, meaning we all have just a little free time before the fall season starts in earnest. Given that, I figured this was a fine time to highlight a show that’s definitely deserved a little more exposure, one that may seem unapproachable, but actually has basically everything going for it. A show whose style of animation may be a little unusual, but whose heart and soul brim with fiery, deeply anime passion. I’m talking, of course, about Thunderbolt Fantasy. 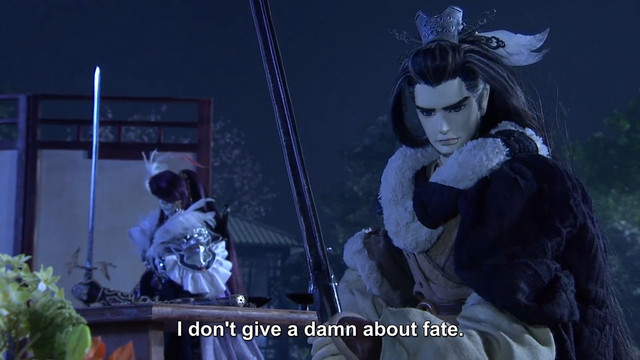 I can understand why people might be put off by Thunderbolt Fantasy - after all, it’s not actually anime. It’s a work of Taiwanese puppet theater, a co-production between the Taiwanese company Pili International Multimedia and a couple of Japanese companies, including the visual novel producers Nitroplus. Though you may not have heard of Nitroplus, you’ve possibly heard of Gen Urobuchi - he’s the writer of Madoka Magica, Fate/Zero, and Psycho-Pass, and it was his fascination with puppet theater that got Thunderbolt Fantasy made at all.

Gen Urobuchi’s very sturdy storytelling forms the bedrock of Thunderbolt Fantasy’s appeal. Underneath its wild puppet exterior, the show is a fundamentally classic fellowship fantasy, where a ragtag bunch of antiheroes join up to prevent a great catastrophe. Dān Fěi is the guardian of a really awesome demon-sealing sword, half of that sword is stolen by a guy who lives in the Demon Spine Mountains, and so Dān Fěi teams up with a group that includes another demon and an assassin known as the Screaming Phoenix Killer to retrieve what’s hers. It’s a swashbuckling adventure full of twists and betrayals, starring locations with names like “Night Devil Forest” and characters with titles like “The Enigmatic Gale” and “The Sharp-Eyed Impaler.” 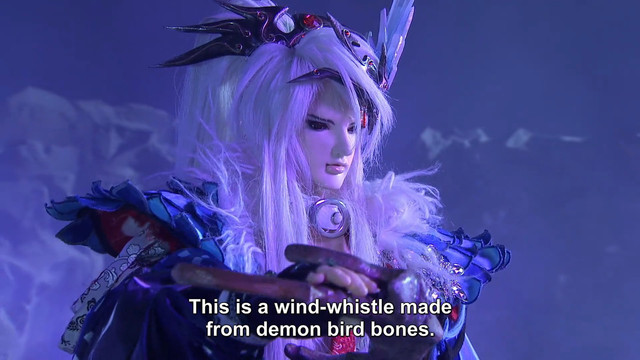 If that all sounds pretty campy to you, that’s because it is. Thunderbolt Fantasy is a fundamentally goofy show, and it embraces that - like JoJo’s Bizarre Adventure, every new idea is enjoyable partially because of how silly it is. Action adventures often lean towards the overtly ridiculous, and in Thunderbolt Fantasy’s case, leaning on that style of charm actually makes its puppet characters feel that much more appropriate. Dramatic zooms on faces that can’t really express much at all might feel out of place in a more subdued production, but in a show full of skeletal demon birds and lines like “YOU’RE STILL CONFUSED ABOUT WHO’LL DIE AND WHO’LL DO THE KILLING HERE?!?”, emphasizing puppet non-expressions actually feels totally appropriate. It’s wuxia battles meets JoJo characters meets backstab-happy Urobuchi storytelling.

Another way to describe Thunderbolt Fantasy might be “what anime seems like to people who don’t watch anime.” The show’s breathless storytelling and wonderfully silly character names are one thing, but the production’s aesthetic qualities also mark it as “more anime than anime.” Battles are characterized by exploding rocks and exploding enemies, and at one point a guy’s ribcage is blown backwards out of his chest. Every single fight is dominated by swooping camera angles, as characters spin past each other in a wild sword-filled dance. At another point, a character throws his sword in the air to decapitate himself, sending his head flying to be carried away by a giant demon bird. Hiroyuki Sawano even provides the score, offering his usual mix of poppy, exuberation instrumentation and thunderous vocal tracks. No element of Thunderbolt Fantasy has ever heard of the word “restraint.” 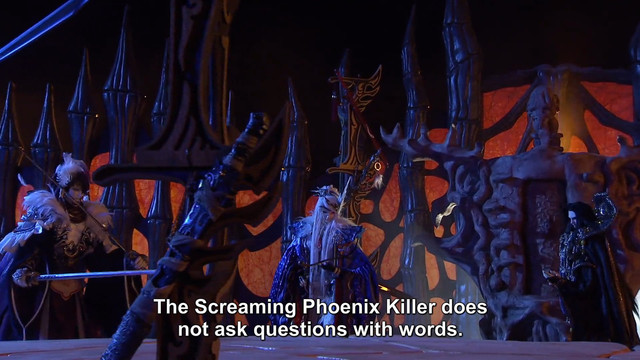 Granted, I know “watch this, it’s really silly” isn’t the most sincere of endorsements. But like JoJo’s Bizarre Adventure, Thunderbolt Fantasy largely works because it is sincere, and because it knows its own appeal. I’ve talked elsewhere about how successful camp requires total sincerity - shows can’t just laugh at their own characters, they have to be laughing with them, at least as long as you want the audience to care about them. And Thunderbolt Fantasy is having as good of a time as anyone.

Watching a terrain-devastating battle between the mysterious Shāng and the Screaming Phoenix Killer, another character wonders “do the two of you have some kind of grudge against chairs and tables?” Asked why he prevented another battle, Shāng replies “can’t you see how you and I are both here? Eating, talking, and being alive?” On top of its natural theater, Thunderbolt Fantasy is elevated by genuinely witty writing, and dynamic characters with lots of forceful personalities. Thunderbolt Fantasy isn’t just action-packed and ridiculous, it’s smartly constructed and cleverly written. And once you get past the initial shock of the style, even the ability of Thunderbolt Fantasy's puppets to convey body language, as well as the gorgeous costuming and set design, will ultimately stand out as impressive and carefully considered. Thunderbolt Fantasy is absolutely in control of its own appeal. 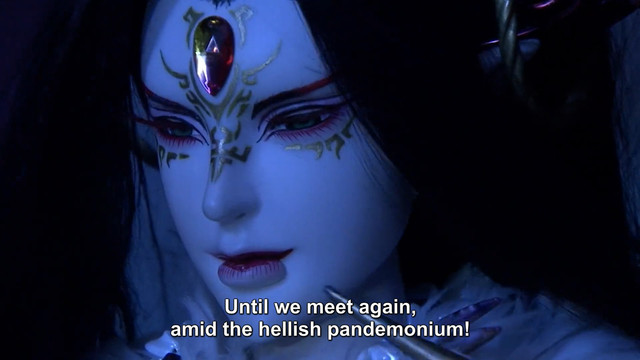