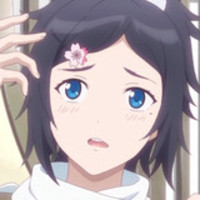 So, I watched the first episode of Touken Ranbu - Hanamaru a few days ago. In case you don't know much about it, let me give you a quick summary: Touken Ranbu is a slice-of-life moe show based off of a online browser game in which the player controls anthropomorphized historical swords to fight an army of scary sorta humanoid creatures known as the History Retrograde Army. As you might guess from the description, the mechanics and story of the game are really just an excuse for the player to amass and nurture an army of attractively designed characters. Sound familiar? If so, that's no surprise, as Touken Ranbu shares many similarities with KanColle, last year's anime about anthropomorphized World War II naval battleships.

The main difference? Instead of incarnating its swords as cute girls, Touken Ranbu's characters are all cute boys.

But is having a cast of moeboys doing cute things actually all that different from having a cast of moegirls doing cute things? You might think so, but if you pay attention to the things Touken Ranbu is doing and compare them to what other shows in the light comedy/slice-of-life moe genre do, it turns out that it's not much different. Assumptions of preexisting knowledge of and investment in the characters aside (notice how Touken Ranbu makes barely an effort to introduce its huge cast), many of the situational patterns and kinds of jokes it uses are instantly recognizable if you're familiar with the genre. Turns out, a moeblob is just a blob of moe. 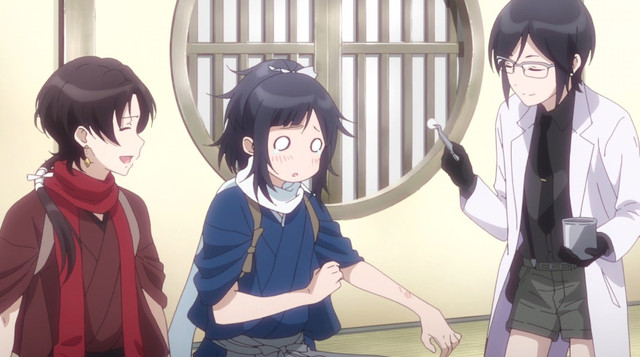 The fact that Touken Ranbu, despite being targeted at a different audience than moe shows featuring all-girl casts, so closely adheres to the feeling of being a typical moe show is a point of fascination for me. We've got character-centric comedy rooted in the various quirks and dysfunctions of the beautifully/cutely/sexily designed characters, loads of funny faces, and super comfy comedic situations like the more fun-loving characters being chased around by the more uptight characters for hitting them with snowballs. And stuff like the mild romantic charges exchanged between Kashuu and Yamatonokami are a well-worn staple of the genre, too. In fact, I'd even go so far as to say that you could switch out all the boys in Touken Ranbu for girls and wind up with a show that feels remarkably similar.

This is all very interesting to watch play out on a character-level as well, where we see the common character archetypes moegirl shows have accustomed us to associating with them emerge in Touken Ranbu's cast (the small genki child, the quiet serious beauty, the earnest hardworking newbie, the mother figure, the attractively competent friend). Visually, the character designs are often quite rather feminine and adhere to recognizable character design-personality codes. And because it's these archetypes that are being drawn on, lots of the actual character behavior winds up paralleling the stuff you'd see in a moegirl show that uses them. I'm thinking of the snowball throwing, of Kashuu's vanity about his fingernails, of Hasebe's speech, and of that adorable hairclip moment between Kashuu and Yamatonokami near the end of the episode. Any of these scenes would be right at home in your typical moegirl show.

At this point, I think I've made my point that Touken Ranbu – Hanamaru is more or less the same kind of show as you'd expect from any slice-of-life comedy anime featuring an all-female cast. So why is this so fascinating? For me, at least, it's because Touken Ranbu is a clear example of moe being used to appeal to an entirely different audience than we normally expect. In fact, the moe appeal that exists both in Touken Ranbu and shows like Kinmoza! actually seems to be entirely divorced from the gender of its characters. I recall a past conversation with fellow Features writer Frog_kun in which he described the Kinmoza! cast as "sexless moeblobs," and I think that description can apply to Touken Ranbu as well. For many of these characters, all you'd need to do would be switch out the male voice actor for a female one and viola! It's a moegirl instead of a moeboy! 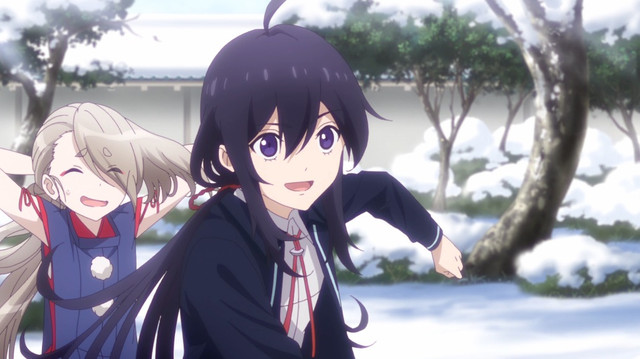 In other words, the kinds of low-stakes character-based hijinks that Touken Ranbu and comparable moegirl shows trade in are fundamentally androgynous; although moeboy shows don't get produced as often, a cast of cute boys can just as easily chase each around over snowballs as a cast of cute girls. And, importantly, the relative lack inherently gendered appeal within the genre trappings means that the real appeal point of the anime is made explicit. Whether it's moegirl shows or moeboy shows, viewers come to them to consume cute characters. As the title says, a moeblob (no matter the gender) is just a blob of moe. It's merely the external trappings that swing the audience appeal in one direction or another.

Of course, there's still variation to be had here. The most obvious analogue to Touken Ranbu is KanColle, as the two shows have essentially identical origins and also incorporate scenes with built-in tension in the form of battles. However, one notable difference between the two shows' premieres is that KanColle spends a lot more time building the world outside the docks, while Touken Ranbu focuses more on life inside the citadel and portrays life within as largely divorced from the external conflict. And other sorts of moegirl shows (like the aforementioned Kinmoza!) devote themselves exclusively to comedy, or incorporate heavier fanservice elements (like Is the Order a Rabbit?). But even so, at the core still rests a flexible genre framework that can be used just as easily to appeal to male audiences as it can be to appeal to female audiences. Moe is spreading and evolving before our very eyes... or, perhaps, it's just finally getting a chance to show what it's really capable of.

Have you tried out the first episode of Touken Ranbu – Hanamaru? If so, how did you enjoy it? And for those of you familiar with other moe shows, did you see the similarities I talked about in the article? Chime in down there in the comments!