FEATURE: Aniwords – The Colorful Leaves of the Fall 2016 Anime Season

Anime looks fantastic this autumn, so let's be sure to take in the sights! 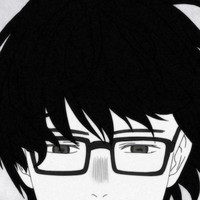 One of the things that keeps me coming back to anime season after season is the visual element. I've sampled plenty of different kinds of art forms and entertainment industries in my life, but it was really in anime that I most frequently found the aesthetic sensibilities that matched up with my own. To try to clearly articulate those ideas in detail would be a hopeless task, but it really all comes down to the fact that I like things that are pretty and beautiful, ornate and elegant. Oh, and I like cute stuff, too, so in hindsight me stumbling into anime seems like something of a logical conclusion.

As my tastes have evolved (become more refined?) since I first began watching anime, I've learned more of the language necessary to describe the kinds of things I like about anime visuals, become more well-versed in the cinematography techniques that anime directors often use to create the kind of stuff I like best, and gained more knowledge about the creators behind the screen. There are lots of problems with the ways the anime industry produces anime, but it's also undeniable that the concentration of talent in this tiny industry is something truly incredible. There may be a lot of bad anime that come out each season and there's certainly no shortage of anime that don't ever reach their full potential as shows because their flaws, but even just looking at the premieres we've already had this season should be enough to remind us of the visual rewards of being an anime fan.

I've haven't even finished my sampling of the fall season's shows yet, but tonight I want to highlight a few of the anime that really caught my eye on a visual level—Bungo Stray Dogs, Flip Flappers, Yuri!!! on Ice, and March comes in like a lion. 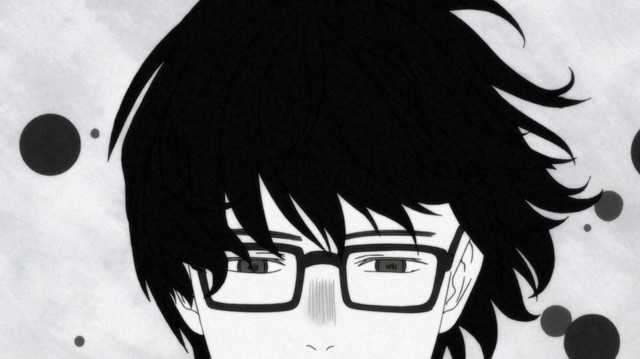 As far as anime industry pedigrees go, that of Bungo Stray Dogs director Takuya Igarashi is without doubt one of the best. A close friend of legendary director Kunihiko Ikuhara (of Revolutionary Girl Utena fame), his directorial habits share many similarities with Ikuhara's, including techniques like silhouettes and stage-like shot compositions, while being punctuated by his proclivity for silly anime faces. In the past, Igarashi has directed both well-loved shows like Ouran High School Host Club and Soul Eater, as well as relative flops like Captain Earth. However successful (or not) his works, though, they're all distinctively Igarashi in appearance.

While Bungo Stray Dogs is certainly far from being the highest concept show Igarashi has worked on, his distinctive style makes it a genuine pleasure for the eyes. Aside from the many funny faces we're treated to, Igarashi's inventive storyboarding, use of color and light, fondness for flat compositions, and generally good eye for creating beautiful shots (all coupled with solid production values) mean that, even if you don't care much for the story, there's an undeniably attractive visual element to the show. As far as I'm concerned, Bungo Stray Dogs is rather pedestrian in terms of character and story, but thanks to Igarashi's talents, I continue to be sucked in by the beauty of the visual storytelling. 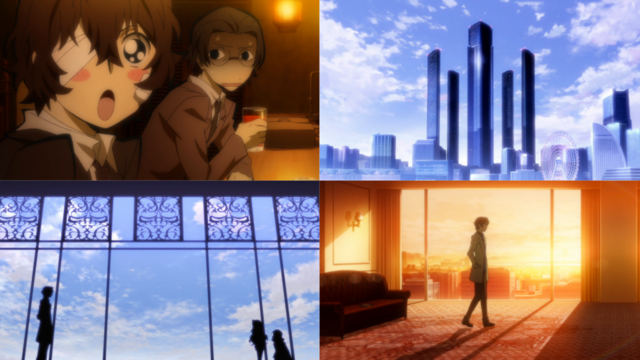 Unlike Bungo Stray Dogs, which was a known quantity coming into the season, director Kiyotaka Oshiyama's directorial debut with Flip Flappers was something of a question mark. Based on the show's first PV (which I watched far too many times) and what little I did know about Oshiyama (his work on Dennou Coil and Studio Ghibli connections), I was hoping for the best, but it's exciting that the first episode of Flip Flappers still surprised me with how wonderful it was. My colleague Brandon Teteruck wrote a nice analysis of the premiere's sensory approach to storytelling a couple of days ago, but I want to also note that, on a purely aesthetic level, Flip Flappers is super beautiful.

Studio Pablo, with their lovely hand-painted pictures, is fast becoming one of the most-recognized names for anime backgrounds, and their work on Flip Flappers is no exception to the excellent standard they've set up for themselves with shows like the original WIXOSS anime and Seraph of the End. But, as good as Pablo's work has been on those shows, it's in Oshiyama's whimsical, fairy tale-like setting that they've found their perfect match. Oshiyama himself drew the storyboards for the Flip Flappers premiere, and his thoughtful layouts (although perhaps not as technically sophisticated as Igarashi's for Bungo) do a fantastic job of showing off the visual wonders of the world of the show—and Studio Pablo's backgrounds along with it. There's a ton of beauty to be found here in the bold colors and wide long establishing shots, and Flip Flappers seems determined to let it shine. 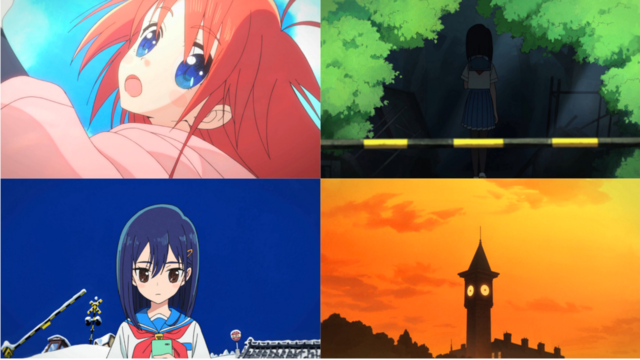 For me, Yuri!!! on Ice sat somewhere between my clear expectations for Bungo Stray Dogs and the relative unknown of Flip Flappers. Director Sayo Yamamoto (you can read a great account of her career here) is someone I've had prior experience with through her work on the sensual The Woman Called Fujiko Mine and the apparent progenitor of Yuri!!! on Ice, her Animator Expo short "Endless Night," but I can't say I really have a solid handle on all of her directorial tendencies. That being said, Yuri!!! on Ice is undeniably a Sayo Yamamoto show. As I wrote on my blog a few days ago, Yamamoto's latest work generates the same kind of engulfing effect that Fujiko Mine does, but using very different techniques than the sultry, almost gritty visual storytelling of Fujiko Mine.

The name of the game for Yuri!!! on Ice's premiere was variety, as the show bounced around through different visual styles just as it did different tones, mastering them all. Whether it was through more cartoony character designs and bouncy animation, grounded and warm long shots, or the shining elegance of the iceskating rink, Yamamoto was clearly more interested in using the visuals to draw out the full feeling of each particular scene than in maintaining a specific look for the entire episode. While I recognize that this kind of variety might not be what every viewer is looking for in a show, I personally found it almost entrancing. It's special enough to watch a director exercise complete control over just one visual aesthetic; to see Yamamoto weave nearly three or four distinct styles together was like watching magic. 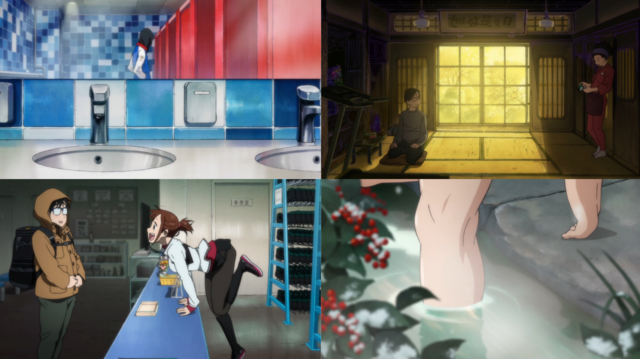 Finally, March comes in like a lion is the latest show from the popular Studio SHAFT, they of the headtilts and other distinctive visual tricks shows like Monogatari, Nisekoi, and Madoka Magica have made them known for. As far as traditional SHAFT-isms go, March comes in like a lion is actually a rather restrained example, taking a slower visual pace despite the presence of the studio's signature quick cuts. Although it was rumored that the infamous Akiyuki Shinbo would be personally directing the show, it turns out that Kenjiro Okada (who is debuting as a series director here) is at the reigns, with mixed results. The overall direction (sound, visual, etc.) for the first part of the episode is stellar—austere, barren, and joyless as fits the mood. The rest, while occasionally beautiful, never quite manages to hit that same level, although it maintains a nice appearance.

As for the visuals specifically, two things stood out to me in March comes in like a lion's premiere. First, while inconsistently showing up, there were some genuinely pretty compositions and visual effects. In particular, the use of water-based imagery in various forms (which starts in the OP and continues throughout the entire episode) provides ongoing visual cues about Rei's emotional state and look really nice doing it. Second, the warm color pallete associated with the family Rei hangs out with and the storybook-like backgrounds lend a unique sense of place to the town by the river where they live. Of these four shows, I was probably least impressed by March comes in like a lion's premiere, but that shouldn't take away from the fact that there's a lot of really lovely sights to be seen here. 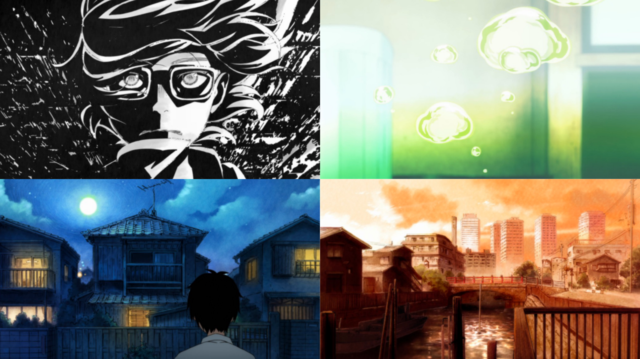 In case it's not clear yet, I'm finding a whole lot to love in this season's anime visually—and that's without even mentioning a number of the other visually accomplished shows airing right now (like Sound! Euphonium 2's photorealistic lighting effects or To Be a Hero's wild toilet-flushing animation or Occultic;Nine's hyperactive sensibilities or Bloodivore's colorful images). While not all of the shows I've mentioned tonight will ultimately pan out as hits or successfully preserve the merits of their visuals throughout their entire runs, I think it's still worth noting and celebrating just how stacked this season, as many seasons are, is with talented creators making anime that just look really cool. Having pretty pictures isn't a cure-all for everything, but being able to appreciate the visual element on its own without a doubt opens us up to new ways of enjoying shows we might otherwise overlook.

And I confess, I've watched more than a few anime just because they were well-directed or pretty-looking, even when I didn't otherwise care for them. The sheer volume of creative storyboarding, direction, cinematographic tricks, and animated joys we get out of anime is something we can treasure about being anime fans. This crazy hobby of ours really does give us some good stuff.

As you might guess, I'm really liking this season so far! What show this season has had your favorite visuals, whether it be character designs, backgrounds, or cinematography? Champion your favorite shows down below in the comments! 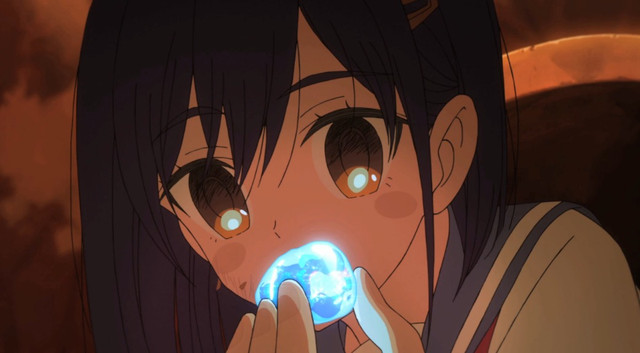 The Dramatic Power of a Great Anime Ending Song