Take one more good look at the real life locations of Sound! Euphonium 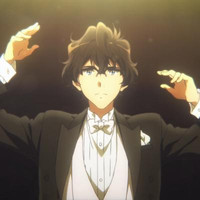 Sound! Euphonium’s second season is in full swing, so it’s finally time for me to wrap up the anime to real life comparisons for the first season of Sound! Euphonium – in this week’s installment of Anime vs. Real Life! Even though I already covered a great bunch of Sound! Euphonium’s locations (including this part, around 200 comparison shots), there are still a couple of good ones left. I’ve probably already talked way too much about Uji’s landmarks and attractions than I should've, so let’s get right to it. This article will focus on all the locations I haven’t covered in the past two parts (Part 1, Part 2).

Uji Bridge is one of the show’s most prominent locations, as it got featured quite often, and also one of the anime’s most memorable sequences took place on that bridge. Obviously, I’m talking about Kumiko running across Uji Bridge, while shouting ‘I want to improve’ from the top of her lungs, in episode twelve. But not only is Uji Bridge one of Sound! Euphonium’s standout locations, it’s also one of Uji’s landmarks in reality. The bridge is one of the oldest in Japan, believed to have been constructed for the first time as early as 646. Uji Bridge has been damaged and destroyed by floods, earthquakes, or wars over and over again. However, as I mentioned in one of my earlier articles, Uji developed as a crossroad that linked two of Japan’s former capitals, Kyoto and Nara – so naturally, the bridge got restored and rebuilt several times. The current one you see in the pictures was constructed in 1996, and is 155 meters long and 25 meters wide. It’s quite famous and appeared in a couple works of Japanese literature, like The Tale of Genji, and no, I’m not talking about Overwatch here, or maybe I am, it’s highly likely that Overwatch’s Genji is a reference to the novel.

I waited a long time for this little guy to sit down there.

That’s a small bridge in front of Uji Shrine. It’s connecting the northern shore of the Uji River to the Furitsu Uji Park, a small island amid the river.

And that’s the view you get from said bridge.

This one could've been taken anywhere, but it’s really the same spot!

Power lines are ubiquitous in anime.

Even though the spot is relatively isolated, it’s still right behind an UNESCO World Heritage Site, the Byodoin Temple. Playing and practicing there with an euphonium, or any other instrument for that matter, probably would not be the best idea.

The little tree was sadly missing.

This water basin is located at the entrance of the Uji Shrine, which I already talked about a couple of times in my second part. After entering the shrine grounds through the torii gate – and thereby entering the spirit world, while leaving behind the secular world – you’re supposed to purify your body and mind at the water basin. These basins are called chozubashi, and are needed to perform a short cleansing ritual, before visiting the shrine. You take up the ladle with your right hand, and scoop up some water, which you then pour on your left hand. Subsequently, switch the ladle to your left hand and pour some of the water on your right. Make sure not to use up all the water, as you’re only supposed to scoop it up once. Switch the ladle back to your right hand, pour it into your cupped left hand, and rinse your mouth with the remaining water. There might always be some variations, but that’s basically how the process goes. If there had been a third water scoop there, I would’ve placed them like in the anime.

That small sign (which could’ve totally been drawn by KyoAni themselves) explains the ritual which I just mentioned. KyoAni really pays a lot of attention to detail, as these are nearly identical.

The hare serves as a fountain, and guards the water pavilion.

Kumiko takes shelter from the rain under the pavilion where the water basin is located. The water ablution pavilion, including the basin, is called a temizuya.

This 7-Eleven is located right outside of JR Uji Station.

That’s the sign of a Saizeriya, which is a nationwide chain of family-style Italian restaurants. I’ve never actually eaten at one of those, so I can’t really comment on the quality, but then again, I’m also not really a big fan of Italian food.

The intersection here is right in front of Uji Bridge.

You can see a bit of the Saizeriya restaurant on the left.

It’s the things I don’t expect to find while doing these comparison shots, that tend to amaze me the most. I had these reactions a lot while I was taking these for Orange, in Matsumoto, where e.g. I found the automated ice cream machine, which I just stumbled across because of sheer luck.

Kumiko’s school is located right next to a residential area called Hatoyama, which is also where this little playground, the Hatoyama Third Children Park, can be found.

Luckily, nobody was there, so I was able to have a go on that swing. I haven’t done that in years.

For all the praise I’m showering KyoAni with, this is one of the very few backgrounds they messed up. Not only are the cars way out of proportion, almost being as tall as the store itself, but you can still clearly see the real picture they used to paint over.

I would’ve waited for a train to pass by, but there was some kind of construction going on.

The small island amid the Uji River.

Railroad bridge across the Uji River for the JR Nara Line, which runs from Kyoto to Nara, with popular stops being Uji, but also the world famous Fushimi Inari Shrine.

Kumiko’s unforgettable run across Uji Bridge in episode twelve. I would’ve taken more pics, but my camera was swarmed by insects.

That street leads up to Kitauji High School.

In the last episode of the first season of Sound! Euphonium, the concert band had to travel from Uji to Kyoto, which is around a 50 minute drive. These shots are already from Kyoto, and as you can see in my pics it was pouring that day, but that did not stop me.

That’s the Kyoto Concert Hall, where the prefectural competition is held. The concert hall was completed in 1995, as part of the of the 1,200 year anniversary celebrations of the founding of Kyoto as the capital city of Japan, back in 794. It’s the home of the Kyoto Symphony Orchestra, and the main hall seats 1839 people.

That’s actually a really nice shot to end the anime on, and also a good place to end my series of comparison shots of the first season of Sound! Euphonium. I hope that you at least enjoyed some of these shots. And the next piece begins...

I’ll be taking a look at either the locations of Yuri!!! On ICE or Magical Girl Raising Project next week. For now, what did you think of Sound! Euphonium’s real world counterparts?

Tags
anime vs real life, sound! euphonium, kyoani
« Previous Post
You Can Get This Awesome Carrying Case For Your NES Classic Edition
Next Post »
Domestic Manga Market Grew To $85 Million Last Year According To Estimate
Other Top News
2 Comments
Sort by: