Check out the real life locations of Yuri!!! On ICE 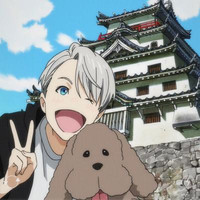 Ladies and Gentlemen, put your ice skates on, it’s time for Anime vs. Real Life!!! On Ice – this week I’m taking a look at the real life locations of the fantastic ice skating anime, Yuri!!! On ICE! The show hops around the world a bit, so I'm not only going to look at locations in Japan, but also in Russia, Italy, and Thailand, so keep on reading.

Yuri Katsuki, the shows main protagonist, actually already told us in great length about his hometown, the castle town of Hasetsu, in Kyushu. While the town really is in Kyushu, Hasetsu is only a made-up name. The real town, which the anime’s Hasetsu is based on, is actually called Karatsu. It’s located in Saga Prefecture, on the northern side of the island of Kyushu. The relatively small city, with an estimated population of 127,000, has been an important trading port for Japan in the past, due to its close proximity to Korea and China. This is also expressed through the name of the city, which literally translates to China and port. Karatsu is mainly known for their pottery, which was heavily influenced by Korea. Now, let’s see how well Yuri!!! On ICE’s locations stack up to their real-world counterparts. This article will focus on the anime’s first two episodes.

*All pictures were taken with Google Street View

Yuri!!! On ICE’s opening scene takes us to Sochi, in Russia. Sochi is located on the Black Sea coast in the south-west of Russia, and got world famous for hosting the 2014 Winter Olympics. In the anime, the Grand Prix of Figure Skating Final takes place here in the Iceberg Skating Palace, a 12,000-seat multi-purpose arena in the Sochi Olympic Park. The venue was used during the Winter Olympics, but also hosted a real Grand Prix of Figure Skating Final in 2012.

That’s already Hasetsu Station, or Karatsu Station in real life. Studio MAPPA is doing an incredible job creating the backgrounds of the show; however, they’re not always staying true to the real-world counterparts. As you can see in the picture above, that’s a completely different statue. You’ll see it in a couple of different comparisons below.

Minako’s exclamation mark game is on point!!! She’s waiting for Yuri inside of Karatsu Station here. In the back you can see an Ekimachi shopping street, where you can buy last minute souvenirs, or grab a bite to eat.

That’s of course a Family Mart in the back, and even the ad is the same in the anime and real life

The statue in front of Karatsu Station got changed to a squid, which seems to be eating a smiling sea urchin. What’s also interesting in the anime version, are the kanji below the statue, which mean 'Hasetsu Peace Declaration’. Karatsu actually merged with a couple of smaller towns in the surrounding area, one of them being Yobuko, which is famous for its fresh squid. As for the sea urchins, there are actually two sea urchin statues not too far from Karatsu Station. That might be one way to explain the different statues, but I’m sure there is a much deeper meaning behind this.

That’s the Yoyogi National Gymnasium, located in Yoyogi Park, in Toyko, able to seat 9119 people. The arena was built for the 1964 Summer Olympics in Tokyo, and is now getting prepared to be rebuilt for the 2020 Tokyo Olympics.

Where’s the ice? The Yoyogi National Gymnasium is a multi-purpose hall, and is able to host several different sporting events, e.g. the Grand Prix of Figure Skating Final in 2009.

Harajuku Entrance to the arena.

That’s the only hot spring in Karatsu that comes close to the one in the anime. I looked at pictures of a couple of hotel review sites, and also the interior looks extremely similar.

Karatsu Castle, which I’ll come back to a little further down.

Wait, that’s not right, where’s Hasetsu Ice Castle? There’s only a high school in front of Karatsu Castle, and no ice skating rink to be found. However, Hasetsu Ice Castle is not a fictional rink, but based on Iizuka Ice Palace in Iizuka City, Fukuoka Prefecture. I was not able to get a good picture with Google Street View here, so I’m linking the Facebook page of the company that designed the ice hall. Expect that place to be filled with ‘skating otakus’ (Yuko’s triplets like to call them that way) soon.

Back in the Yoyogi National Gymnasium.

This shot was shown during the sequence, in which the video of Yuri’s performance was going viral. That’s actually a shopping mall in Thailand, called Imperial World, and is located a bit south of Bangkok. Now why did they decide to include this specific shopping mall in the first episode? Probably because it features the only Olympic-size rink in Thailand, so it’s highly likely that one of the many figure skaters from the ending might be Thai. Or you know, maybe one of the background animators just took a couple of good pics during his vacation.

That bridge is in St. Petersburg, Russia. I’m pretty sure that’s the exact same one that got shown in the anime, because the handrails are the same, there are streetcar tracks like in the anime, and you can see one of the screens of the Petrovsky Stadium in the anime.

Pulkovo International Airport in St. Petersburg. I actually lived in Russia for a couple of years, and the weather in the anime is exactly how I remember my time there, though I was pretty young back then.

The bridge leading up to Karatsu Castle. You can see Takashima Island in the back.

As you saw before, Karatsu castle is located atop a small hill above Karatsu bay, and is also known as dancing crane castle. The building of Karatsu castle was commissioned by Terasawa Hirotaka in 1602, after he aided the Tokugawa Forces in the Battle of Sekigahara in 1600. However, the castle was torn down during the Meiji Restauration. The current castle was rebuilt in 1969, and hosts exhibitions on samurai armor and weapons.

170 meter long shopping street near the station, offering a lot of souvenirs, like the Korean-influenced pottery.

In the ending we get a quick shot of the Florence Cathedral, and possibly a quick look at the Italian figure skater. Florence is definitely worth a visit, but it’s also extremely expensive.

And that’s it for this week’s installment of Anime vs. Real Life! What did you think of Yuri!!! On ICE so far? Next week, I’m going to take a look at the real life locations of another anime with a made-up name, Magical Girl Raising Project!

Tags
anime vs real life, yuri on ice
« Previous Post
"Wild Romance" Lets You Explore The Animal Side Of Your Potential Companions
Next Post »
"Izetta" Screening Reportedly Confirms Plans For A Single Cour
Other Top News
6 Comments
Sort by: