FEATURE: Why It Works: FLIP FLAPPERS' Lonely World of Windows and Doors 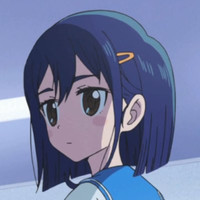 She sits in the classroom, eyes unfocused, staring out at the sky beyond. The room is small; smaller than a classroom should be, really, with the single window only emphasizing the claustrophobia of the whole. It’s not a happy place - there’s a sterility to it, clear in the unornamented walls and the faded blue palette. With lights that illuminate without warmth and desks that cradle without comfort, it matches the grey of Cocona’s sad interior world. 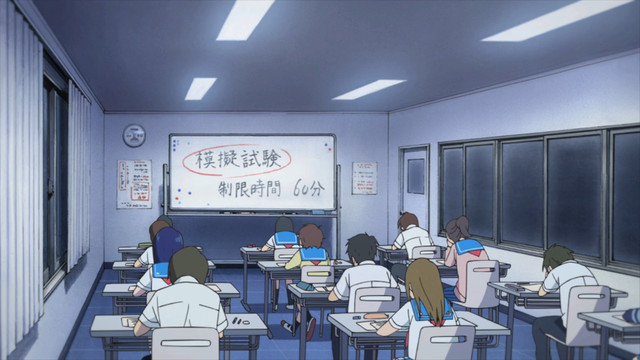 Hey all, welcome back to Why It Works. Last week I shined a brief spotlight on some of the less-noticed shows of the fall season, but it turns out that brief look wasn’t enough for me. FLIP FLAPPERS in particular is a show I keep coming back to - from its fairy tale storytelling to its vividly inventive worlds, it offers something unlike any other show this season. But FLIP FLAPPERS’ fundamental story ideas aren’t the only thing that make it unique. The show also distinctive in how much of its storytelling is left to the world itself - from how Cocona’s feelings are conveyed to the way her relationship with Papika develops, so much of what this show is saying is illustrated without a word.

FLIP FLAPPERS opens with striking portrayals of Cocona in her natural habitat. The first two episodes use the same general structure - Cocona begins in an unhappy, caged world, and is slowly guided towards freedom by Papika’s presence. Even if the adventures Papika takes Cocona on may not make a whole lot of immediate sense, there’s a clear emotional narrative of fear and sadness giving way to wonder and joy. And the portrayal of Cocona’s initial melancholy and entrapment is clear through every visual element of the production. 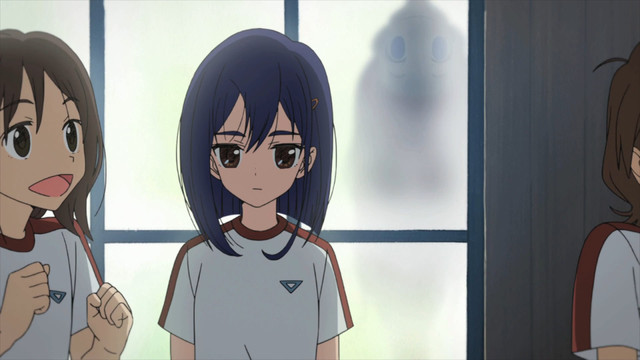 The color scheme of Cocona’s school is the first variable conveying her mindstate - a faded, depressed blue in that initial scene (which is directly contrasted with Papika’s mood, colors, and clear narrative freedom), it rarely shifts to anything more than bland pastels. Papika’s placement within that school environment is also critical. While the first episode largely presents her as trapped in places too small for her, the second episode isolates her in vast, empty spaces. Neither of these framings are comfortable; the first is too sterile to convey intimacy, and the second presents her as lost in a cold and empty world. Cocona’s school is not a friendly place.

On top of the underlying layout, Cocona’s initial position is also made clear through the show’s steady emphasis on windows and other portals. Cocona is framed similarly whether she’s in her classroom or on the train - either way, she’s in a cramped and unhappy place, looking outwards to an unknown land of freedom. The few times warm light actually enters the school, it generally comes from an ostentatious window, be that in the stairwell or nurse’s office or wherever (I particularly like this shot, where the idea of traveling through a portal is emphasized both through the stairwell light and the painting it falls upon). And when Cocona isn’t actively separated from the larger world by windows, she’s often captured by actual bars - be they the crossing bar of the train tracks, the window frames of her home, or even the shadows conveying her initial state in the opening song. 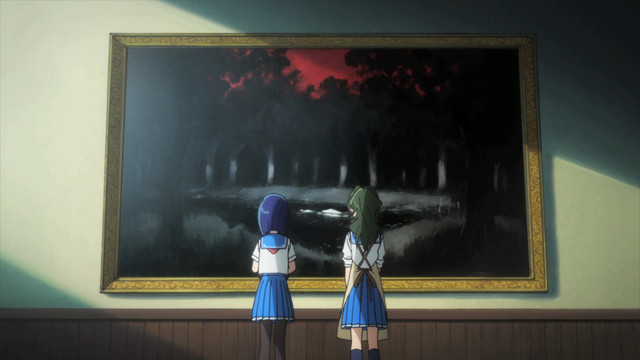 All of this visual storytelling gives us an extremely firm idea of who Cocona is even in the absence of dialogue. Her words and body language support this impression; unhappy and uncertain, she speaks timidly of not knowing what path she should take in life. Because she never harmoniously integrates with her environment in a visual sense, it’s easy to relate to her feelings of malaise and entrapment in an emotional one. And because the fact that she is unhappy with her current life is only conveyed through her visual presence, it’s very natural for she herself to not accept or articulate that fact. If Cocona were directly admitting to her unhappiness, it’d be less natural for her to fight back against Papika’s offer of escape; by presenting her feelings as a visual, subconscious presence, the show is able to more effectively convey these contradictory motives. Cocona resists Papika’s attempts to draw her into a new world, but everything about Cocona’s visual reality demonstrates that she really wants to embrace it.

And of course, all of that melancholy framing makes for an even more dynamic contrast when Cocona accepts Papika’s world. FLIP FLAPPERS’ loose worldbuilding naturally lends itself to these transitions; since Cocona’s initial world is so reflective of her state of mind, it makes some emotional sense that falling into adventure is a matter of mood more than science. Cocona embracing the pursuit of adventure literally brings her world to life, acting as the conduit to worlds where reality is fluid and dreams are real. In FLIP FLAPPERS, the world is literally what you make of it.