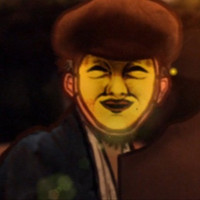 The story you are about to read is based on a completely true story. This occured in October of 2015. There was only one survivor...and only her account to explain the truth.

Once upon a time, there was a girl. She loved Halloween more than anything, and enjoyed celebrating the holiday with her friends at school. Each day leading up to the holiday, she decided to bring fun, spooky treats to class to impress her friends.

It started out simply- ghost cookies one day, witch hat shaped brownies the next. Each day her friends gave her more and more attention, and she soaked it up, basking in the joy of making people happy with yummy snacks. It was harmless- everyone loved to eat her treats, and the spotlight was all on her! Each day her friends eagerly waited to see what she would bring next. She wanted to do something really special for Halloween, something truly creepy.

That was when she remembered- her favorite horror film was Japanese. What if there were other creepy Japanese horror stories out there? She began to research, and a scant hour later she had come up with the ultimate spooky Halloween treat: cupcake characters based on some of the creepy myths from the anime Yamishibai. There were so many great things to choose from! Creepy clowns, weird dolls, dead spirits...she chose to make a gaunt spider lady and a meat-creature. 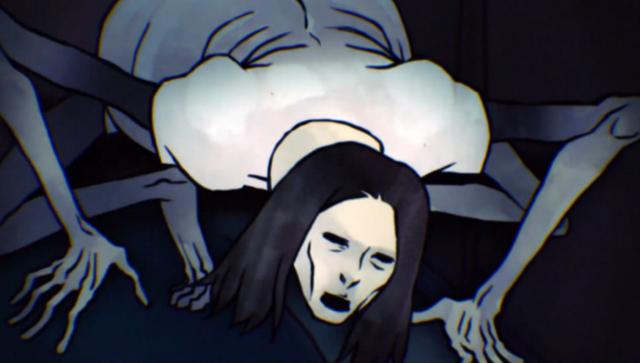 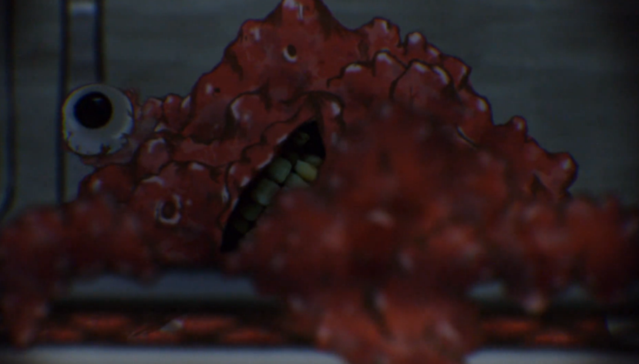 Everything went off without a hitch-she made and decorated the cupcakes, using special things like chocolate and marshmallows, and hoping against hope they would absorb the spooky atmosphere of the holiday season. She worked on them for hours, and finally set them aside on her kitchen's counter before going to bed.

The next morning, she woke up and headed straight for school- she didn't even have to explain to her mom why she was skipping breakfast, as her mom was nowhere to be found- probably went to work early. The coffee pot was warm, and half-full, so it seemed like she'd woken up, at least.

She skipped off to school with her treats. Happily, the cupcakes were a hit with her friends! Everyone was so impressed with her artistic skill, they decided to wait to eat the cupcakes after lunch. She looked around to see what her best friend had to say- she could have sworn she'd seen her walk into the room- but for some reason she was nowhere to be found. Shrugging, she set the cupcakes on a shelf in the back of the classroom, so they wouldn't get in the way and settled in for class.

The day droned on, and most students found themselves dozing off to the boring, monotone voice of the teacher. Time blurred by, and the girl only looked up when she realized her teacher wasn't speaking anymore.

Shocked out of her stupor, she started abruptly and knocked her notebook off her desk. The room was completely empty! She looked around warily, wondering if it was a joke. She looked outside the room, under desks, and in closets with no result. Unsure of what was happening, her gaze was drawn to the cupcakes sitting innocently in the back of the room. She went over to study the little cakes, and noticed a shiny liquid on one of the cupcakes. It was red, and sticky, and smelled strangely salty. Confused, she decided to take a bite, wondering if she had somehow forgotten about an ingredient she added at the last minute.

She gagged on the cupcake as an unbearably hot, meaty flavor flooded her mouth, and looked at it in horror.

Inside the cake was a cavity dripping human blood.

OOOOH SPOOKY!!! Actually, was that spooky? I thought I'd be ok at writing a scary story, but now that I've done it, it seems kinda silly. A for effort, right? I wanted to make Yamishibai cupcakes using some of the spooky characters from the show, so I thought it would be fun to write a spooky story mimicking the structure of the anime. This show is honestly the perfect thing to show during a Halloween party- each episode is just a couple of minutes, and they're all mysterious and scary! Things jump out, people get killed- this show is not messing around.

However, my cupcakes kind of failed in the long run. I was so excited about this week, too! Honestly, I've been talking about it non-stop the whole week. I'm not sure what happened exactly. The spider lady sorta looks like the main character of Detroit Metal City or Harambe. The meat-creatures took way too long to make- I gave up after two, even though I made all the details. I guess I just got bored too easily, but mostly I think I was really ambitious to make two designs. Because of this, I don't have exact measurements of everything really, since I didn't go through with making everything.

This is my first try making the spoooky spider lady's face: 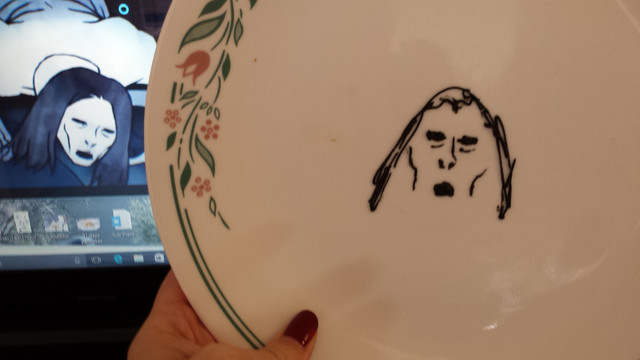 They say practice makes perfect but I don't think I improved much.

I also tried to film parts of this, since it's hard to describe how to decorate something with words. How do you write out how to pipe a face onto a cupcake? But that failed too, since I don't have a tripod and nothing to stand my camera on. Do you guys even want video tutorials? As a result of trying to film stuff, I didn't get all the pictures that I normally take, so I'm missing chunks of stuff, and am much too lazy to get stills of the footage. Well, mostly, I'm running out of time as this post is due in about 4 hours and I'm still writing...

Looking past my disheveled attempts at trying new things, these cupcakes taste really yummy, and the decorations are awesome! They leak "blood" too, which is really cool (and delicious). If you have patience, this is a great thing for you to make- the cupcakes came out looking mostly cool, at the least. Perhaps spooked by my own cupcakes and swarthed in misery, I gave up- but even the individual pieces taste good, so there's that. 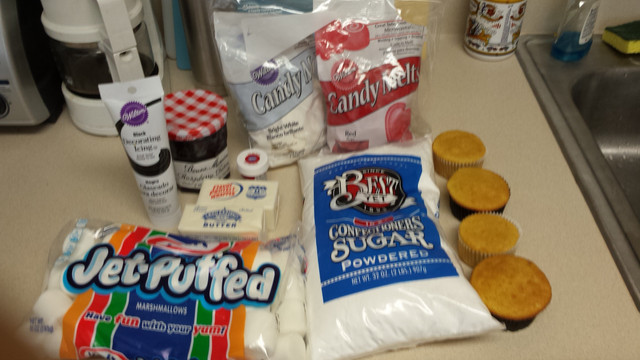 First, start by making the buttercream frosting. Place butter in the bowl of a stand mixer and beat about 5 minutes, until light, fluffy, and much whiter in color. Add in the powdered sugar cup by cup. Then add a dash of vanilla. At the end, if it's too firm, loosen up with a tablespoon of milk. Take about 1/2 of the frosting out of the bowl, and set aside. Dye the other half bright red. You will need A LOT of red food dye for this- just be forewarned.

Once that's ready, set frosting aside. Core your cupcakes by just taking a little knife and carving out a small circle of cake. Set these circles aside, and fill the centers with a red jam of your choice. I used raspberry- I found the tartness of the berry contrasted nicely with the ultra sweet frosting. To make it a but runny, I mixed it with about a teaspoon of water, and ran it through a sieve to take out any seeds. I put this mixture in a plastic bag, snipped the tip, and filled the cupcakes. Then, I put the little circles of cake back on the top to seal it in.

Let's make the decorations for the little meat guy. Microwave red candy melts following package instructions. Coat marshmallows in the candy melt so they are red. Set aside on wax or parchment paper to harden. 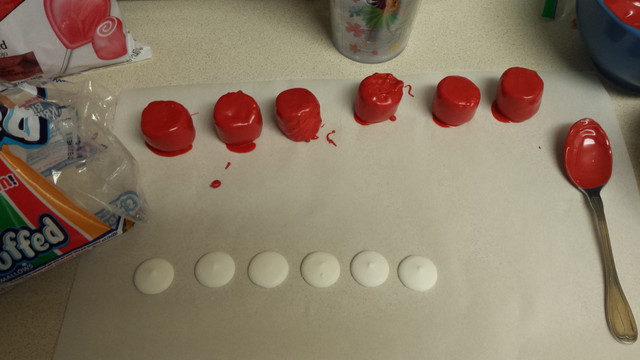 Put the rest of your red candy melt in a ziploc bag. Snip the tip, and pipe out little red mouths on the same wax or parchment paper. Tap lightly on the counter to smooth out any imperfections. Then, make the eyeballs. Take out plain white candy melts, but don't melt them. Instead, pipe a black frosting iris (I just bought a black frosting rom the store- it's easier than trying to dye frosting black), and add a little white reflection dot with some frosting or melted white candy melt. Then, using red candy melts or dye, add little eye veins to the outer rim to make the eye look irritated. 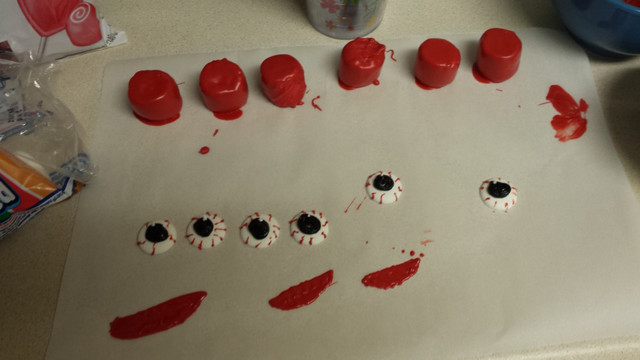 Moving back to the mouths- melt white candy melts, and pour into a ziploc bag. Cut a verrry fine tip off the end, and pipe two rows of teeth on each mouth. While waiting for that to dry, attach eyes to the marshmallows with some melted candy melt and set aside to harden again. 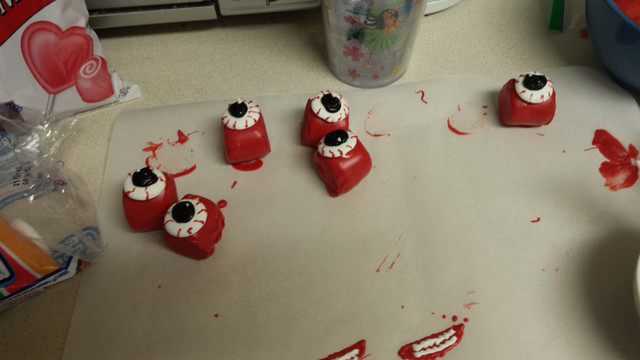 Mix up some cocoa powder, yellow food dye, and just a tiny splash of the almond or lemon extract. Use this to paint the teeth a sickly shade of yellow, concentrating on the gums and in between each tooth. When that sets, pipe thin black frosting outlines to define the teeth. 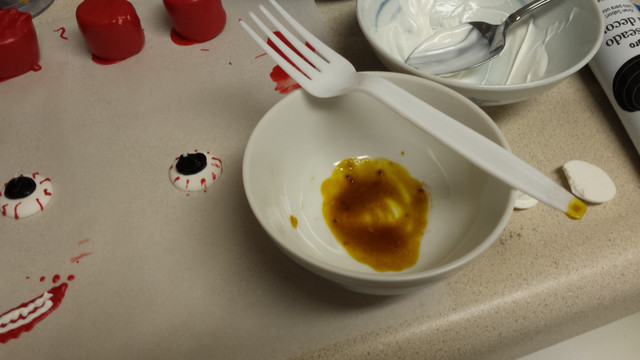 Let everything set up really well, and then assemble! Load red frosting onto a cupcake, and make it textured by gently sticking the spatula down and up and down again all over to make it spikey and gross looking. Place they eye in, and build up the frosting around it to incorporate it into the cupcake. Then, place the little mouth, and settle it back into the frosting as well. Finally, drizzle the watered down raspberry jam on top to give it a gruesome, bloody appearance! 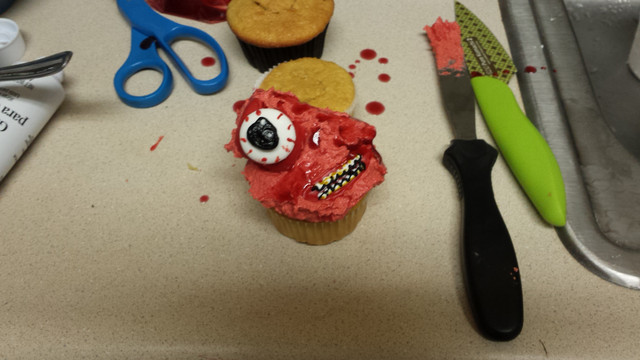 Let's move onto the creepy spider lady. Pile a cupcake high with white frosting. Neaten up the edges by swiping the frosting upwards all around the cupcake, and then level off the top. Put some black frosting into a plastic bag, and snip a fine tip off. 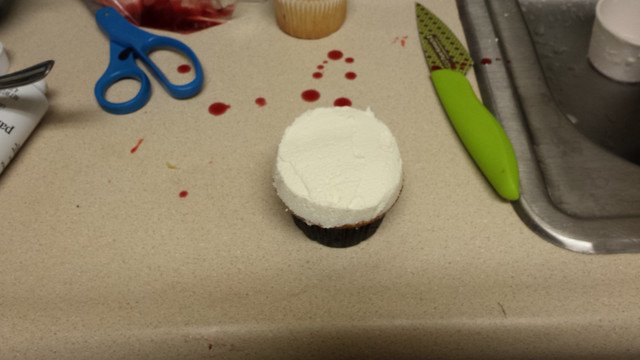 Start by making the eyes- use a reference picture to help you get the shape just right. Then do the lines under the eyes, the nose shadow, nostrils and mouth. Add cheekbones in, and then give a bit of definition to the face by adding a chin. If you mess up any of the lines, use a toothpick or fork to gently push the line where you want it to be. Finally, make hair by piping long, thin strips around the face. 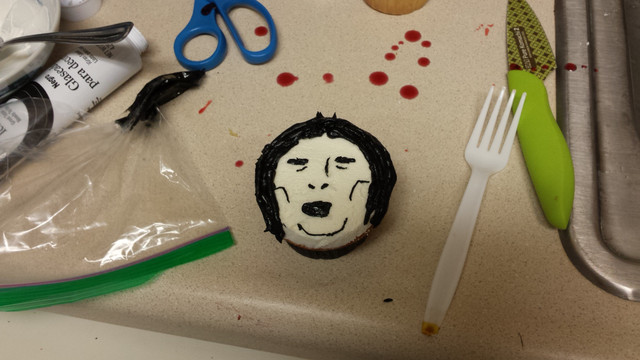 And now they're done!! 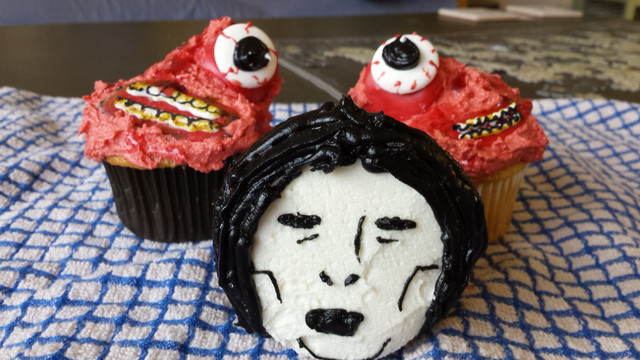 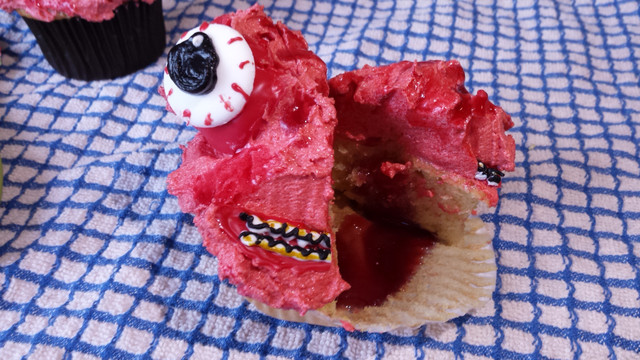 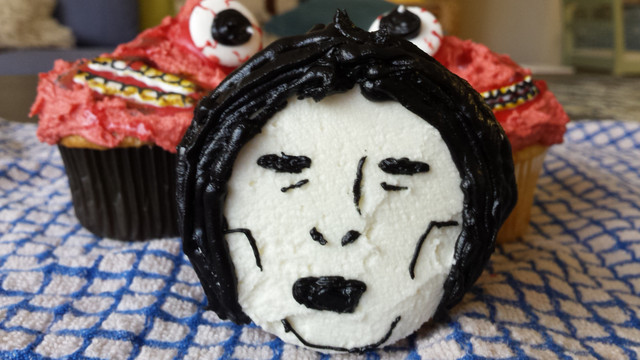 Ignore the GOT puzzle in the background...The cupcakes came out looking all right, though. I wouldn't give myself any awards, but things could be worse. Yamishibai is high on the scare factor but not so much on the food factor- I wanted these guys to look scary and creepy, but I'd say that they sort of look cute/funny more than anything. Anyway, if you're in the mood for some Halloween holiday baking, I hope at least a part of this tutorial can help! Sorry I'm not on my game as much as usual this week... Whatever happens, don't let these bad boys get the best of you! You don't want to get eaten like the girl's friends in the spoooky story.

I hope you enjoyed this post! Check in next week for another spoooooooky recipe. To check out more anime food recipes, visit my blog for more anime and manga themed food. If you have any questions or comments, leave them below! I recently got a twitter, so you can follow me at @yumpenguinsnack if you would like, and DEFINITELY feel free to send me food requests! My tumblr is yumpenguinsnacks.tumblr.com. Enjoy the food, and if you decide to recreate this dish, show me pics! :D
In case you missed it, check out our last dish: Human Lasagna from "91 Days". What other famous anime dishes would you like to see Emily make on COOKING WITH ANIME?
Tags
cooking with anime, yamishibai, cupcakes
« Previous Post
Toonami Offers More Details On Mamoru Oshii's "Sand Whale and Me" Micro-series
Next Post »
Aqours School Idols Prepare Their "Love Live! Sunshine!!" Christmas Single
Other Top News
2 Comments
Sort by: