FEATURE: Cooking With Anime - Katsudon from "Yuri!!! on ICE"

This dish will make a gold-medalist out of anybody! Or, at the very least, it'll make you FEEL like a winner 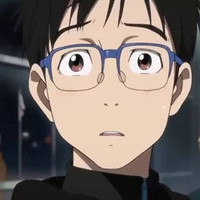 Have you ever reacted so strongly to something in an anime that you've fallen off your chair before? I'm honestly curious, if you have. Let me know what anime it was below in the comments. I had a bit of a kerfufffle on my couch because of an anime. Let me set the scene: I was sitting on our couch with my roommate. We were watching the first episode of Yuri!!! on ICE on her tablet, pleasantly surprised by how cute the show had been thus far. I was resting my head on her shoulder, and holding the tablet up between us. It was a nice, relaxing moment as we watched Yuri and Viktor relax in the onsen. AND THEN VIKTOR STOOD UP OUT OF THE HOT SPRING, REVEALING HIS MARVELOUS, BARE BACKSIDE TO THE WORLD. My roommate slapped me in shock, I threw aside the tablet in surprise, and, thrown off balance, we both tumbled off the couch to the sound of our own flummoxed shrieks. I have never been so surprised to see someone's bare bum in my life. (Sorry, any students reading this. You'd probably be surprised, too, if a man unexpectedly flashed you.)

We're a little disappointed that this probably means that there won't be a real relationship between Yuri and Victor. Don't you think? There's too much teasing for there to actually be a shot at a real relationship. *Sighs deeply* Oh well. I love the Yuri/Yuri/Viktor fake-love triangle going on. In fact, I love Russian Yuri. He's so angsty and teen-like, it's pretty great. Also he has fantastic style! However, Japanese Yuri is so sweet. I love how serious Yuri is about skating and how hugely his love for food factors into his ability to skate. He does an awesome job explaining the scoring system for figure skating (I finally understand!) and when he discovered that love was like a pork bowl, a feeling he could translate into his skating, I was right there with him. Yuri is absolutely right- true, passionate love IS like a pork bowl, and I'm here to prove it to you this week with a recipe for his favorite katsudon.

Now, I've definitely made katsudon before. In fact, in order to make this recipe for you, I actually had to consult my own recipe for the katsudon in The Devil is a Part-Timer. However, I've learned a lot since then, and my recent trip back to Japan gave me the chance to sample other versions of katsudon that I thought were superior to my own recipe. So, what I'm giving you today is  a recipe I tweaked to reflect a more vivid flavor in the broth, along with a recipe for the pickles on the side of Yuri's dish. These pickles are awesome- Japanese pickles are called Tsukemono and the kind I'm making for this recipe are fukujinzuke, which means, basically, lucky god pickles. This kind of pickle is normally served with curry rice, but works well here too with the pork bowl. There are many other kinds of pickles- if you're curious, you can check out this list here. I chose this kind purely because they looked closest to what I saw in the anime, and I thought the taste would go well with the dish. 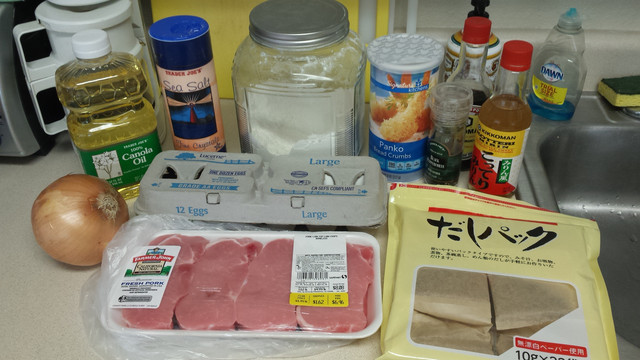 For the Pork Bowl 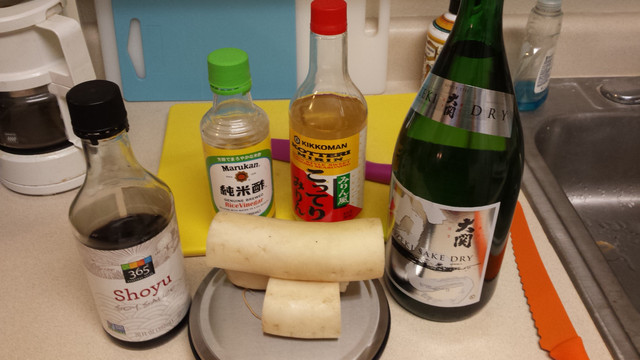 You will also need steamed rice, about 1/3 cup dry rice per person.

Making the katsudon and fukujinzuke

Let's start with the pickles, or fukujinzuke. You'll need to do this at least the night ahead, but it's very simple! Peel and chop daikon into small pieces. Allow to soak in a saltwater bath for 30 minutes, and then drain. 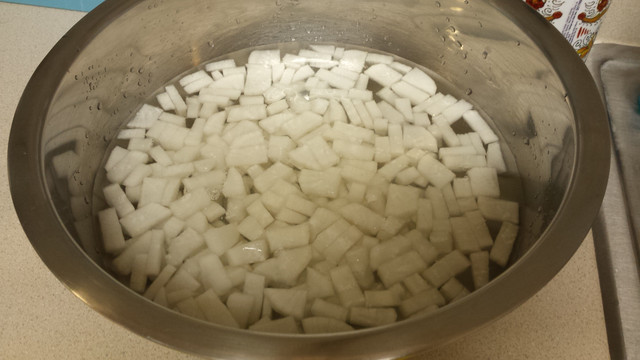 Combine liquids in a pot, and sample the flavor. Make adjustments now according to your preferences- adding more vinegar or sugar depending on your tastes. Bring to a boil. Add the daikon in, and boil about 5 minutes. Then take daikon out, and continue to boil liquid until it reduces by half. Put daikon into tupperware container, and pour the liquids over the daikon and set in the fridge. This will keep for a few weeks, and is best eaten with rice and other meats. This type of Japanese pickle is normally eaten with katsudon/curry rice. 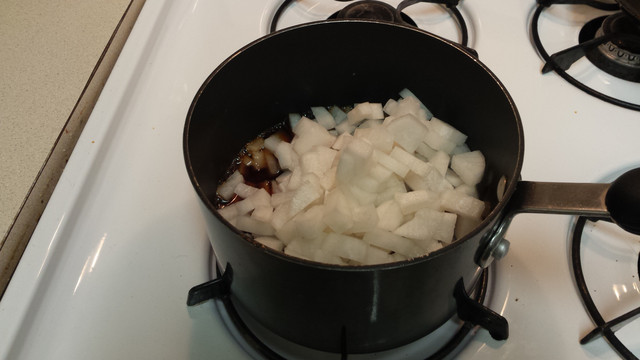 Once that's been sitting overnight, at least, we can work on the katsudon. Start by making the sauce. Make your dashi (I made mine according to package instructions), and combine with other liquids. Taste test as you go- this measurement of soy sauce to sugar to sake to mirin was perfect for me, but be your own judge. Set aside. 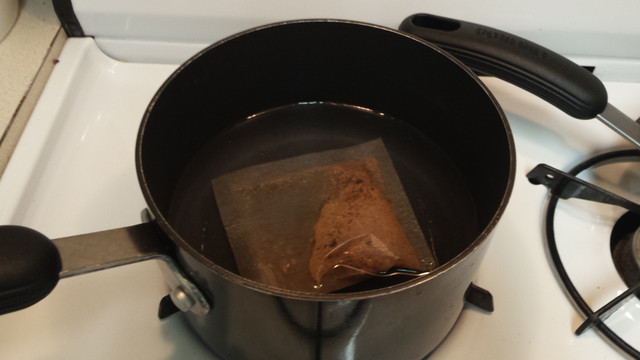 Cut your onions- first half, then slice thinly. Set aside. 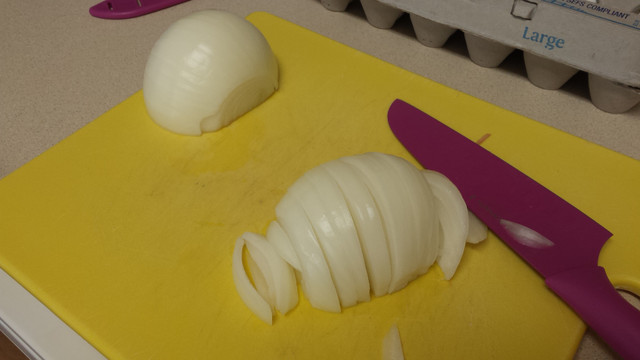 Start by breading pork cutlets. Dry pork chops, and cut in half if they're too thick. They should be about 1/2 inch thick- mine were about 1 inch, which is quite large. Salt vigorously. Prepare breading station. Set up a plate with flour, a bowl with scrambled, raw egg, and another plate with panko crumbs. 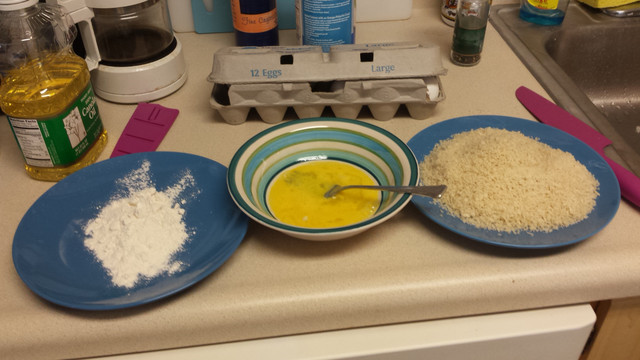 Coat cutlet completely in flour, then egg, and then panko. Set aside.

Heat up a pan of oil. It's ready when you place a wooden spoon handle in the oil and bubbles form around the end of the handle. If it's bubbling really, really vigorously, turn the heat down just a little bit and allow to cool off. Then, place cutlets in the oil, and cook, and 4 minutes per side, or until all sides are golden brown. 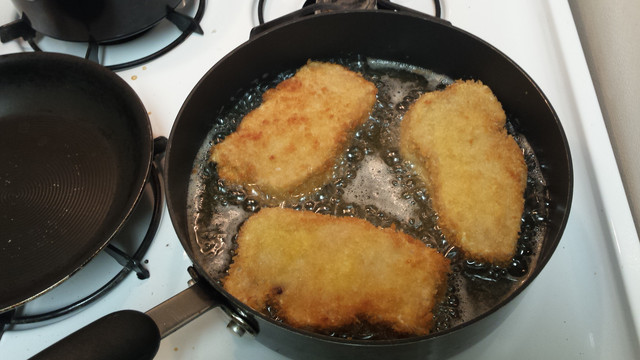 Remove pork from pan and set aside. 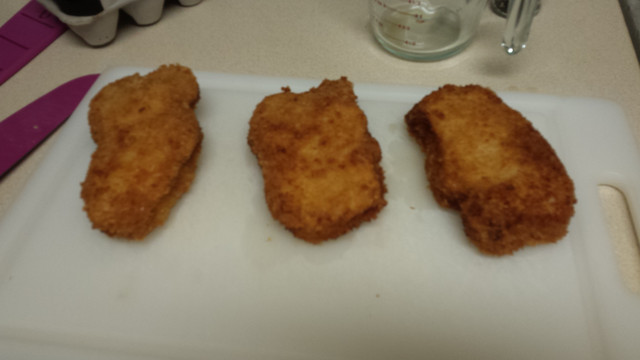 In another, smaller pan, put about 1/3 cup dashi mixture in a pan with 1/4 of the sliced onions. Simmer about 1-2 minutes until onions are soft. While cooking, beat two eggs in a bowl, and shake in some frozen peas. Slice one of the katsu. 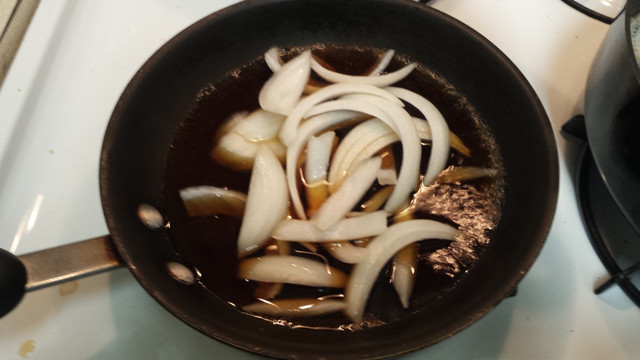 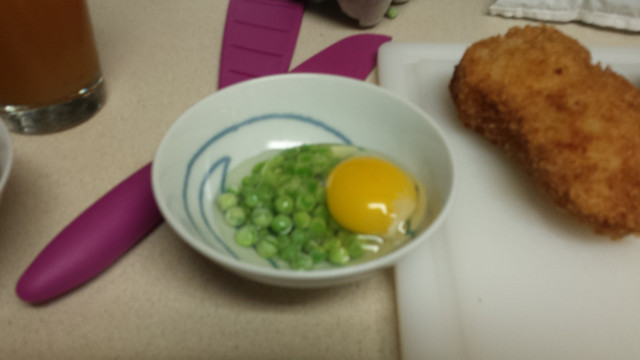 Place the katsu on top of the onions, and pour the egg mixture over the top. Place a lid on top and cook for about 1-2 minutes, or until egg and peas are cooked. 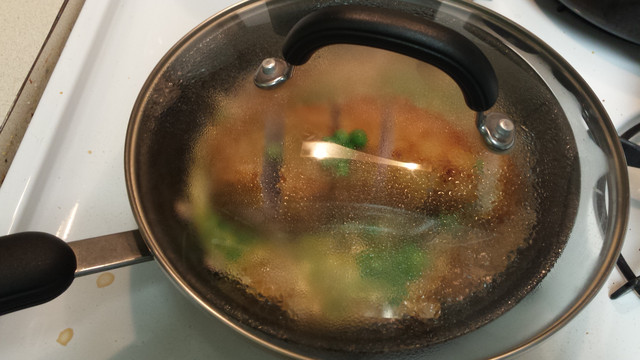 Quickly dish up a bowl of rice, and pour the onions, egg, and pork over top. 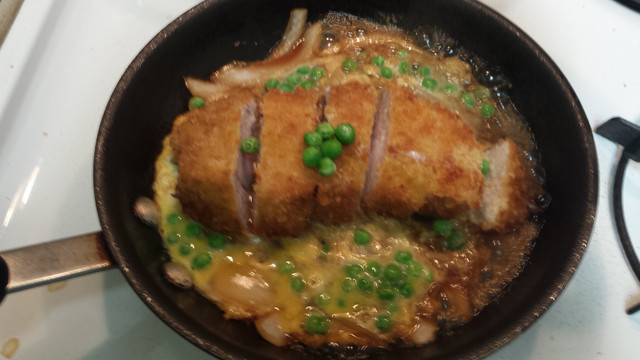 Dish up your pickles on the side, and now it's done! 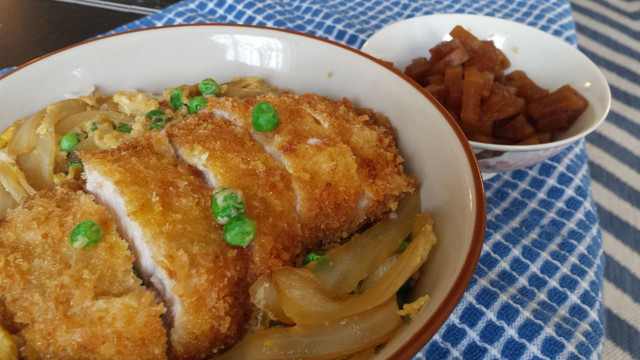 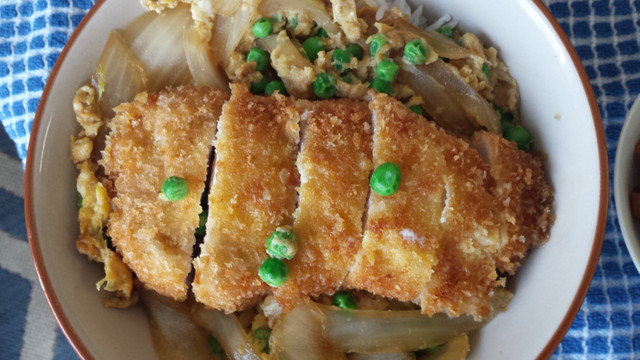 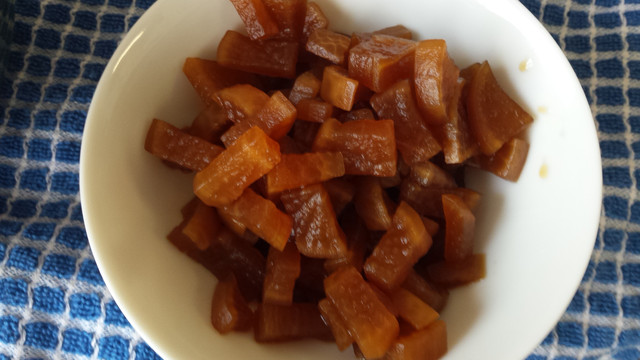 I fed this to my friends, and we ate it together. They loved it! I loved it! My roommate gave it her seal of approval! This dish is so filling and GOOD. Holy cow, I scarfed this bowl down and was so full, but it was so worth it! Eating the pork with the pickles at the same time was a nice treat as well- the tartness contrasted with the sweetness of the broth nicely. All in all, I'd call this an award-winning pork bowl.

I hope you enjoyed this post! Check in next week for another recipe. To check out more anime food recipes, visit my blog for more anime and manga themed food. If you have any questions or comments, leave them below! I recently got a twitter, so you can follow me at @yumpenguinsnack if you would like, and DEFINITELY feel free to send me food requests! My tumblr is yumpenguinsnacks.tumblr.com. Enjoy the food, and if you decide to recreate this dish, show me pics! :D
In case you missed it, check out our last dish: Japanese Urban Myth Cupcakes inspired by "Yamishibai". What other famous anime dishes would you like to see Emily make on COOKING WITH ANIME?
Tags
cooking with anime, katsudon, yuri on ice
« Previous Post
"Symphogear GX"- Tsubasa Kazanari Ame-no-Habakiri Ver. Figure Is Ready To Slash Your Budget
Next Post »
Sentai Filmworks Announces "Girls Und Panzer Der Film" English Dub Cast
Other Top News
16 Comments
Sort by: