Feature: Anime vs. Real Life – "March Comes in Like a Lion" 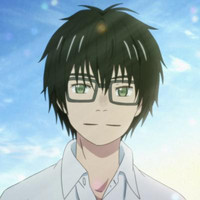 The story revolves around the daily life of the troubled 17-year-old professional shogi player, Rei Kiriyama, and his relationship with the three Kawamoto sisters. March comes in like a lion primarily takes place in Shinkawa and Tsukuda, two residential areas along the Sumida River in different parts of the Chuo Ward in central Tokyo. To be honest, when I first heard that studio Shaft was going to do the anime adoption of March comes in like a lion, I was a bit unsure as to how much the studio’s distinctive trademark style, mainly talking about the abstract and interpretive background designs here, would affect the show’s real world inspirations and locations. To my surprise, it works really well. Shaft’s house style is unmistakably visible in the show, and actually makes these relatively mundane real world locations interesting and charming. But see for yourself, this article will focus on the real life locations of the first episode of March comes in like a lion!

Rei’s apartment has a really beautiful view of the Sumida River. He actually makes a lot of money as a pro shogi player, even having a higher income than his teacher. I was not able to find the actual apartment building, which should’ve been located somewhere along the waterfront of the Shinkawa area.

One thing that really stands out in the show are the lengthy and melancholic sequences of Rei’s daily commute, which always show us a wide variety of different locations. First, Rei is passing the Takabashi bridge on his way to Tokyo Station. The backside of the flood gate, which we see in some of the later episodes, is also visible in the background.

If you’ve ever been in Tokyo, chances are high that you stopped by at Tokyo Station at some point during your visit. Now, why does the busiest railway station in the country look completely different here? March comes in like a lion is based on an ongoing manga series by Chica Umino (also known for Honey and Clover), and started serialization way back in 2007. Tokyo Station has been undergoing major renovations and reconstructions in the meantime, both on the Marunochi side and here on the east side of the station, the Yaesu side. There are actually a couple more incidents of ‘outdated’ locations in the show, which you’ll see a little further down.

Sendagaya Station, which is located within the Shibuya Ward, will also be getting an overhaul soon. The Japan Rail Company is rebuilding a couple of stations in Tokyo in preparation for the 2020 Summer Olympics and Paralympics. Among these selected stations is also the well-known Harajuku Station, which I’m personally a bit sad about.

Across from Sendagaya Station is the Tokyo Metropolitan Gymnasium. The sporting complex hosts a variety of different sporting events, including volleyball, wrestling and figure skating competitions. It first opened in 1954, and was later used as a venue for the 1964 Tokyo Summer Olympics. It will also host the table tennis competition during the 2020 Olympics.

Here’s the next outdated location. You won’t find these two vending machines in this specific color scheme there anymore, they are now blue and white. I was actually trying to get a clearer picture, so I looked at some older recordings of Google Street View, and lo and behold, there they were, the original machines. They must’ve been swapped sometime between July 2014 and March 2015.

These signs of the Green Mall Street also seem to have been replaced.

The Hatanomori Shrine dates back to 860 and was named after the forest that was located there. The shrine contains one of the oldest Fujizuka, which are mounds shaped like Mt. Fuji so you actually don’t have to climb Mt. Fuji yourself to worship it. Apparently, the nine hours I needed to climb Mount Fuji last summer were completely in vain. At least I got a couple of good comparison shots for the anime, Encouragement of Climb.

Kei’s commute ends at the Shogi hall, which is also the headquarters of the Japanese Shogi Association. It celebrated its 90th anniversary in 2014.

Tsukishima Station, located in the Tsukishima Area, back in the Chuo Ward.

There sure are a lot of bridges in March comes in like a lion, which comes as no surprise since especially this part of the Sumida River is studded with bridges, like the Tsukuda Bridge, which crosses the river from Tsukishima to Tsukiji. However, this little bridge here is the Tsukuda Kobashi, which translates to Small Tsukuda Bridge. It crosses a small tributary, and is 12.5 meters long.

Not the right angle, but you guys get the picture.

The Tsukuda Sumiyoshi Shrine, which was founded in 1646, protects fishermen and sailors. The Tsukuda area was originally inhabited by fishermen.

The tall building you can see to the left is the Ginza Creston Hotel.

That’s the spot where the Kawamoto’s confectionery is supposed to be. There actually is a confectionery/restaurant here; however, it looks completely different than in the anime.

That’s basically it for the real life locations of the first episode of March Comes in Like a Lion, but here are some more comparisons from the ending of the show, which actually features a whole series of different bridges. Is there a deeper meaning behind this? I’d love to hear your opinions.

I believe you already know this one.

That’s the Chuo Bridge in both pictures, which I’ll cover in greater detail in the next installment.

Last, but not least, the already mentioned Tsukuda Bridge.

So, what did you guys think of the real life locations of March comes in like a lion? I hope a lot of you are planning a day off to visit some of these during your next trip to Tokyo. Any specific show I should cover next? Let me know in the comments!