Apples are in season, and you know what that means! Bunny apple slices, otherwise known as the perfect opportunity to kill your friends with cuteness 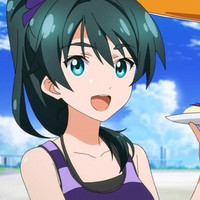 It's well in the midst of autum here in Northern California, and you know what that means- APPLES. And tons of them! Our supermarkets are overflowing with about 100 different kinds of apples, and a weekend or so ago I went apple-picking with some friends, where I was also able to purchase apple butter, apple juice, apple cider, apple truffles, apple jam, and apple dumplings, to name just a few of the seasonal items they had for sale.

All of these apples makes one ponder what to do with them. Last year at about this time I made Winry's famous apple pie, but this year I wanted to go for something a little simpler and a little more ubiquitous- rabbit apple slices, or usagi ringo. These cute little snacks show up EVERYWHERE in anime, which is why I classed it as part of my "Every Anime Ever" series. For example, amidst the shows Crunchyroll has, they show up in Vividred Operation  as well as Yuru Yuri. Thiese shows are basically cute girls doing cute things, which is exactly how these apple slices get made. 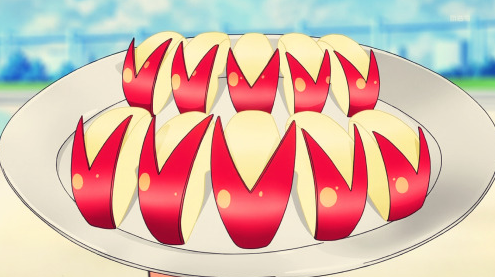 I also thought these snacks made an appearance in Erased, but when I went back to check it appears they were just regular old boring sliced apples. These rabbit-ear apple slices are mostly a snack made for little kids, but you really can enjoy them at any age. My roommate's mom used to make these for her when she was little, and she's been really stressed out with midterms lately so I deicded to make these for her as a study snack, which she ate with gusto.

Probably best of all, these are a really easy treat to make. They're so easy that I decided to record a tutorial to show you, since it's something you can do in just a few steps. I've attached the video below- I've also never filmed myself making food before, so if you have any tips, they would be much appreciated! :) In case you don't want to watch the video, here's the step by step process:

4) Make two cuts into the apple skin that form a V, meeting in a point in the middle of the apple slice. Don't cut all the way through the apple, though!

5) Peel off the skin between the cuts, ending at the point of the V in the middle of the apple. 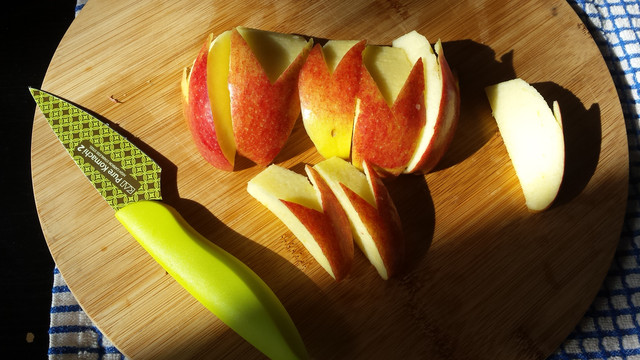 Here is the video tutorial where you can see me do these steps in real time:

I hope you enjoyed this post! Check in next week for another recipe. To check out more anime food recipes, visit my blog for more anime and manga themed food. If you have any questions or comments, leave them below! I recently got a twitter, so you can follow me at @yumpenguinsnack if you would like, and DEFINITELY feel free to send me food requests! My tumblr is yumpenguinsnacks.tumblr.com. Find me on Youtube for more video tutorials! Enjoy the food, and if you decide to recreate this dish, show me pics! :D
In case you missed it, check out our last dish: Katsudon from "Yuri!!! on ICE". What other famous anime dishes would you like to see Emily make on COOKING WITH ANIME?
Tags
vividred operation, cooking with anime, bunny rabbit slices
« Previous Post
Dubbed "Persona 5" Trailer Introduces Phantom Thieves' Feline Mascot
Next Post »
See Rean and Alisa in Real Life in New "Legend of Heroes" Musical Promos
Other Top News
9 Comments
Sort by: