How have RWBY's visuals evolved since Volume 1? 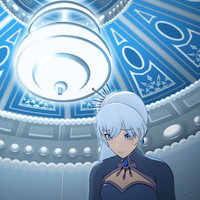 I've followed RWBY on Crunchyroll since the first character trailers were uploaded, and one of the great pleasures of keeping up with the series has been watching the show evolve and improve over the years. RWBY has always been something I’ve enjoyed watching, but it seems obvious to me that the show in its current form in Volume 4 is a remarkably improved work compared to what it began as in Volume 1. In many ways, watching RWBY has felt like watching a team of creative talent gradually growing along with the show they're creating.

Last week, we talked about how RWBY's storytelling has evolved over the years. On tap today is a multi-faceted topic featuring some aspects of the show that you might not even notice if you weren’t looking for them—its visuals. 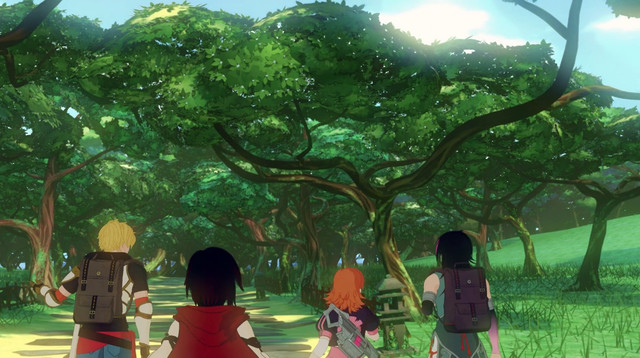 We’ll start with Volume 3, as the first two seasons’ visuals more or less exist on the same functional, but unexceptional plane. And when I say start with Volume 3, I really mean it, because RWBY’s improvements in the visual department are evident from the season premiere’s very first scene, in which Ruby holds a one-sided conversation with her mother’s grave. Painted in radiant shades of orange, featuring what was at the time the show’s most technically sophisticated lighting, and filled with details that fill out the entirety of the shot, it’s a beautiful scene that—departing from the earlier seasons’ obsession with motion—possesses enough visual beauty that the stillness is able to be effective all on its own.

This specific moment is just a particularly effective snapshot example, but the kind of attention Volume 3 gave to the feeling of the world as a whole entity persists throughout the entire season. Scenes like Juane and Pyrrha’s conversation in episode 8, Winter’s coaching lesson with Weiss in episode 3, or the venture into the halls beneath Beacon in episode 6 all incorporate elements of light, color, and general set design that give the world of RWBY an actual presence in the story, rather than having it simply be a setting for battles. And, better yet, when paired with the season’s improved writing that we discussed last week, the whole show feels far more actualized as a holistic entity. More on that later. 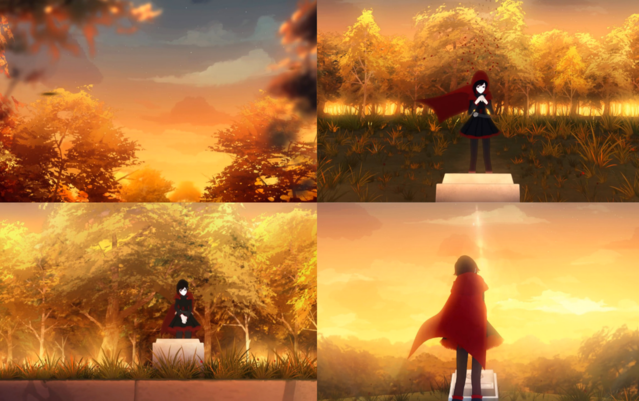 Volume 3 also saw RWBY’s first attempts at using shot composition to introduce a far more active and meaningful visual language into the show. While the storyboards and layouts in Volume 1 and Volume 2 never feel incoherent or incompetent, they also never really do much more than frame the action of the moment in the most practical way possible (although Monty Oum's fight sequences are a notable, incredibly sophisticated exception worthy of their own essay). However, Volume 3 saw the staff start to branch out, investing individual scenes with extra weight through the use of more complex and intentional use of camera placement and shot framing.

One example of this that stands out to me is Qrow’s conversation with Yang in episode 8 after she has been disqualified from the tournament because of her attack on Mercury. This scene is filled with shots that do much more than simply show us what's happening—a low angle shot focused on Yang with Qrow’s foot in the foreground after Qrow asks why she attacked Mercury emphasizes her confusion and unhappiness, a slightly canted shot with leading lines via the bookcase pointing at Qrow hints that he's a bit upset himself despite his cool exterior, a bird’s eye shot highlights a moment of distance between them, a high angle shot through the window adds a sense of uncomfortable tightness to the scene after Qrow delivers Raven’s cold message to Yang, etc. These kind of techniques show up throughout Volume 3, and although they don’t all work as well as those in this scene do, they certainly were evidence of a RWBY whose bag of visual strengths had evolved beyond simply having fights that were fun to watch.

Excitingly for us as viewers of the show, while these improvements (which also included a diversification in the kinds of effects the show used in fights) were significant in Volume 3, they also pale in comparison to the advances RWBY made in Volume 4. 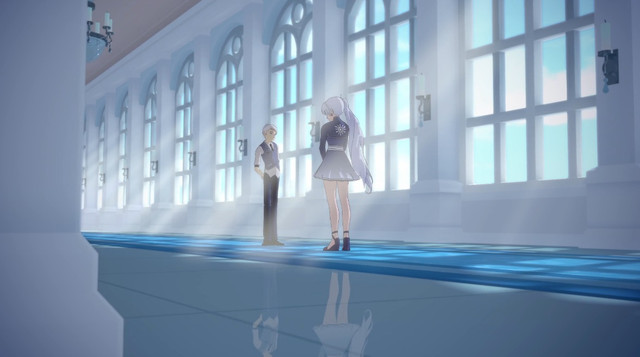 Before we dive into the specifics of those advances, though, I think it’s important to take a brief look at the production realities that have made the increase in visual creativity possible. While it's true that limitations on artists can push them toward greater creative invention, it's likewise true that improved technology can broaden the scope of what creators are able to do (something Kvin over at the Sakuga Blog wrote about earlier today in relation to the new Pokémon anime).

First off, Volume 4 saw the production team at Rooster Teeth switch from using a software program called Poser to using Autodesk's Maya, which allows for far more complex animation and visual effects to be created. I’m not an expert with either of these programs, but I think the differences in their capacities are already showing themselves (check out the complicated shadows in Sun’s hair in this shot from episode 3 of Volume 4—even the best moments of Volume 3 weren’t capable of that level of detail).

On the human side, RWBY has also seen growth in the staff working on the show since the early days (for example, Volume 2 boasted a single person credited as “Lighting Artist,” whereas Volume 4 currently has an entire team working on lighting). Volume 4 also boasts a number of other teams working on various visual aspects of the show that have expanded over the course of the show’s run, and while it’s impossible to pinpoint exactly how the addition of specific individuals has impacted the show as a whole without insider knowledge, it’s obvious that the cumulative effect has been a net positive for the way RWBY looks. Of course, merely adding more manpower is no guarantee of increased quality, but given the final product we’re seeing, I think it’s safe to say that the new talent Rooster Teeth has added to the show has been a huge benefit to it. 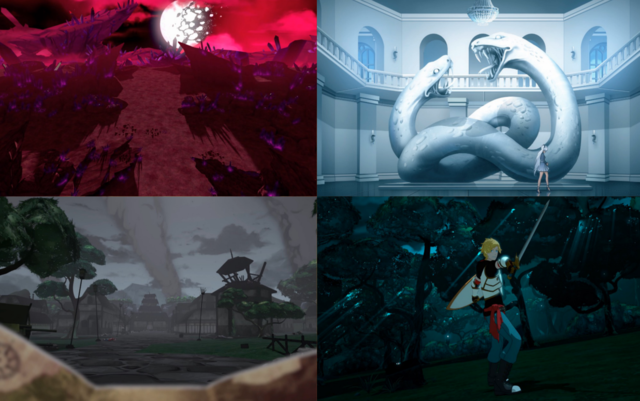 Now, about those changes. Already in Volume 4, the increased range of what the show's staff are able to do with lighting has been on display—as have been the tangible effects in terms of the story and characters. One of the more emotional exercises of this was the almost magical lighting work during Juane's training session in the forest at the end of episode 2. The moonbeams peaking through the trees and the little floating lights helped to infuse the scene with a real sense of sadness, the beauty of the moment playing ironically against the acuteness of Juane's loss. However, this growth hasn’t just been limited to these kinds of palpably emotional moments. Yang’s scenes in episode 3 use softer, almost dustily warm lighting to establish a more subdued, melancholic mood—another example of RWBY’s ability to unify its written storytelling with its visual storytelling to achieve a more potent effect.

Overall set design has been another area where Volume 4 has taken great strides forward—as evidenced by the fascinating depiction of Weiss's home in episode 2. Shown off in a sequence of long shots (a compositional choice that makes our favorite ice queen's feelings of isolation obvious) and dominated by blues and whites, everything from the teardrop crystals hanging from the hall lights to the intricate patterning on the empty dining room chairs' upholstery evokes a unwelcoming impression of cold, distant wealth and class from the Schnee household. Background details like this, even if they only exist on screen for a single shot, are the sorts of things that both bring RWBY's world to life and increase the show's ability to convey more types of information in different kinds of ways.

In fact, the near simultaneous improvements in RWBY's written and visual storytelling almost lead me to believe that they were necessary partners to each other in the show's ascent. The truth of the matter is that, when putting together film and television, all elements of the production are important and affect each other. While I'm not bold enough to claim direct causation in the case of RWBY, I do think it's at least a fascinating coincidence that the show's improving visuals paralleled the rise of more effective and nuanced writing. I've sadly only been able to feature a tiny sampling of what RWBY has done visually in its third and fourth seasons, but I hope I've managed to at least draw your attention to some of the ways the show has grown up lately—and maybe opened your eyes to some things you can be looking out for as it moves ahead.

And that's the end of our series on RWBY's evolution! What have you guys thought about the way the show's visuals have changed over the years? 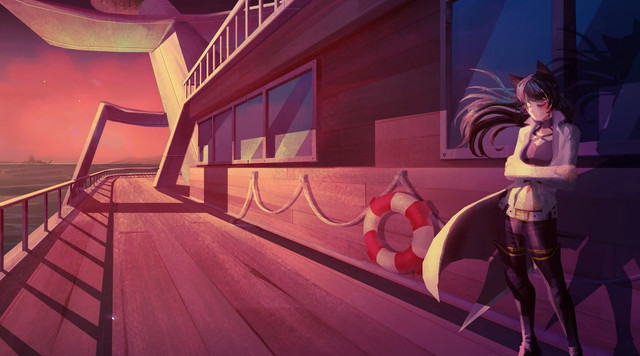