FEATURE: Why It Works: Sound! Euphonium's Tempestuous Muse, Part One

Today we explore one of Sound! Euphonium's most compelling and mysterious characters! 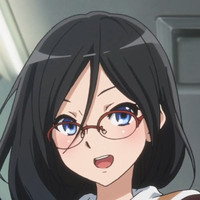 In spite of my focus on Flip Flappers and JoJo these past weeks, I’ve been just as impressed with what Sound! Euphonium has been up to these days. Euphonium’s pleasures are quieter ones than those shows - instead of things like overt visual symmetry or dramatic shifts in color scheme, the show succeeds through the precise, beautiful specificity of its choices, and how well it captures very grounded and seemingly mundane emotional turns. The subtlety of Euphonium’s strengths is characteristic of Kyoto Animation’s works, and an understated character drama is the perfect venue for the studio to shine. And one specific member of Euphonium’s cast pretty much exemplifies how effective this choice can be - Asuka Tanaka, the proud and distant euphonium. 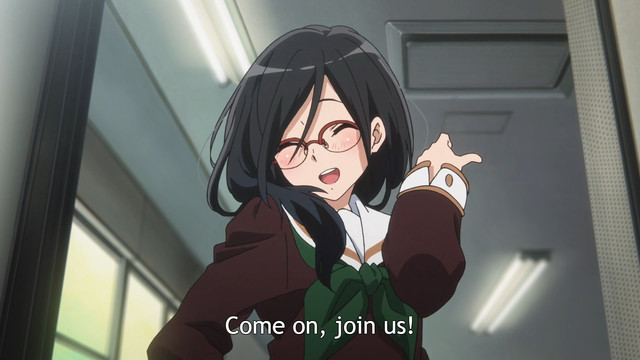 Asuka’s introductory scene shows off her first and most publically visible personality: loud, goofy, and very confident. In fact, her very first pose shows off this personality - head high and arms wide, she embodies an approachable but still somewhat intimidating kind of self-assurance. She’s the one who initially drags the heroine Kumiko and her friends into the concert band, acting as the band’s spokesperson in between silly parlor tricks. Her vocal personality, and the leadership role she seems to take in the band, would immediately make you think she’s the band president.

But Asuka isn’t the band president. Asuka never mentions it herself, but the band’s true president Haruka later reveals that Asuka actually refused that job, instead settling for the vice president role. The strangeness of this choice isn’t indicated through overt dialogue; instead, the contrast in persona and confidence as expressed through body language reflects the odd dischord of this choice. Haruka is soft-spoken and unobtrusive, not the person you’d expect to lead a competitive concert group. She seems overwhelmed by the prospect of drama entirely, while Asuka’s forceful personality would seem to be tailor-tuned to it. The disharmony of Asuka’s role is made clear through her every action. 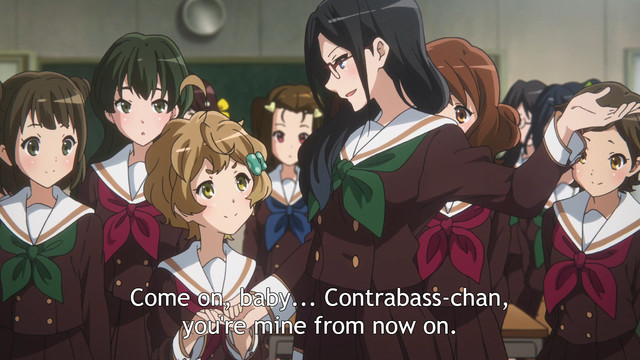 Of course, that’s not all there is to Asuka. Her oddly background role in the band as contrasted against her clear confidence, and how much faith everyone else seems to have in her, acts as a kind of unspoken foreshadowing, while other clues of character slowly add up. When drama strikes, Asuka doesn’t console herself with her friends - she hashes out her feelings alone. When new tuba player Hazuki gives up on making the concert band cut, Asuka terrifies her into trying again. And when the terror approach is replaced by a much stupider one, Asuka specifically mentions how “humor is important for a band,” as if it’s more an ingredient or tool than an authentic expression of self.

All of these small moments add a kind of edge to Asuka, the sense that you’re never really seeing her true thoughts. The more she relies on comedy, the more you get the sense that comedy is a weapon for her - a way she expresses either confidence or dominance, putting others on edge and hiding her actual feelings. Because of this, it comes as not as a total surprise, but as a validation of her contradictory nature when, in response to a purely personal conflict causing a rift in the band, she actually gets honest. 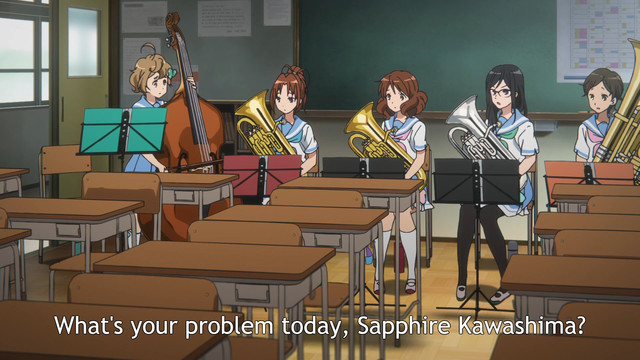 Asuka doesn’t seem to care about feelings - she cares about results. Though she opens this scene by asking if something happened in Midori’s personal life, it’s clear by now that little asides like this are a feint. After hurrying the downtrodden Midori out of the room, Asuka asks her friends what’s wrong, and learns Midori is feeling down because Hazuki was rejected. This, at last, prompts a spark of honesty from Asuka: “I don’t care.” Stupid relationship drama has no place in this band. How could you let something like that affect your performance? I’m going to go practice alone.

That small scene is perhaps the defining moment for Asuka in the first season. In isolation, it’d simply be one callous moment - but in the context of her general persona and other small reveals, it appears as the one clear clue to her actual feelings. Asuka’s general mode of behavior is revealed to actually be a farce, a performance that she likely enjoys and feels natural embodying, but that nevertheless exists separately from her true feelings. By emphasizing the physical giveaways of her body language and slowly distributing small moments of honesty, Euphonium is able to present multiple sides of Asuka gracefully, even though none of the first season’s arcs actually involve her directly. 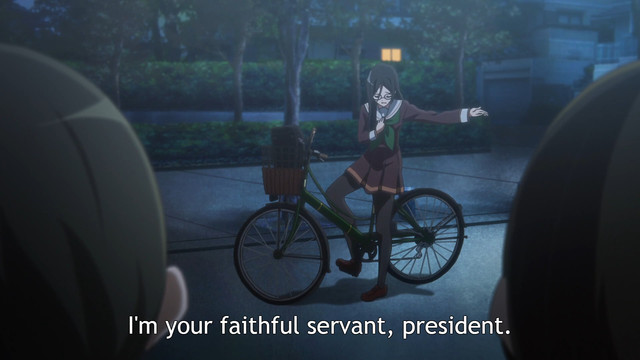 This “true Asuka” pops up at key moments throughout the production. Though she’s callous, she’s not distant. She seems to care passionately about exactly one thing: the future of the band at large. Anything that threatens that future, be it ego or heartbreak or any other kind of drama, is frustrating and childish, to the point where she’s disgusted it even exists. Why are you all acting like children? We’ve got a show to play.

Through the end of the first season, only one scene contradicts that attitude - a brief moment of reflection at the end, where she fondly looks back on the practice time they’ve shared. It’s just one small exchange, but in the context of a show where every single character choice and shift in body language is precisely captured, that conversation feels like a door opening into a more honest self. With none of her usual comic gimmicks or cold-eyed certainty, her words and expressions exhibit warmth and even vulnerability. How can the person who saw all romance as childish say something like “I wish summer would go on forever”? How could someone who’s expressed such unflappable confidence be comforted by a trite response like “we’re going to Nationals”? The show doesn’t answer this question there, but the fact that it feels like a question at all is reflective of Euphonium’s careful character writing up until that point. 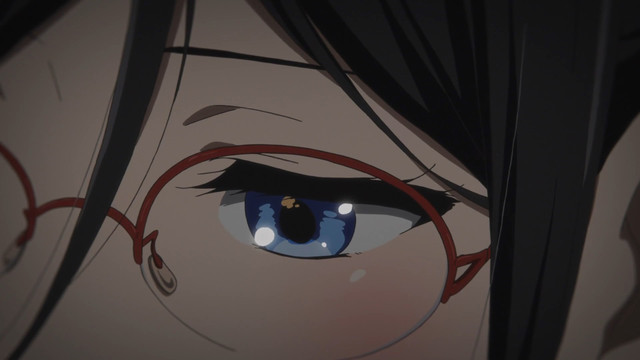 Speaking of not answering questions there, this article’s already gotten a little out of hand, and we haven’t even reached the second season! I’ll be heading off for now, but will be checking back with Asuka next week, as we explore what all this lovely characterization was leading up to!