Nothing tastes sweeter than revenge... except maybe this cocktail. Drink responsibly! Not a recipe for those who are under the legal drinking age in whatever country you're from. 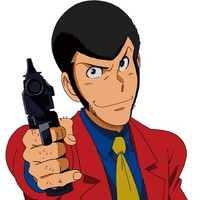 2016 had been quite something. I think a lot of people are looking for revenge for the hell that was 2016. Or is that just me? I feel personally victimized by 2016- on the one hand it was a great year personally- I finished writing my first book, worked 3 jobs simultaneously WHILE BEING A GRAD STUDENT, traveled to five different countries, and met lots of awesome people. On the other hand, tons of my favorite artists and actors died, ebola was a thing, a few different family friends passed away, andsomeone very rude broke into my car earlier this year and decided to take a nap in it, making me wary forevermore about getting into my car. I still haven't quite forgiven the mysterious interloper.

But that's not all. Oh no. To make matters even worse, on a hike I did just a day ago in Sapa, Vietnam, I fell and sprained my ankle. The path was too bad to turn back, so we and had to wade up and down through rivers of mud for two hours before we could make it back to a road where we could call for help. Along the way we fended off some water buffalo, argued with a drunk man who made me give him the bamboo we'd cut for a cane, and literally constructed our own path by hoeing out toeholds in the mud and laying rocks down in rivers to cross without getting our shoes more wet than they already were. Afterwards, we were delivered to an empty, zombie-wasteland kind of hospital where our tour guide, who was so upset we'd abandoned our plan, took control of my wheelchair and banged me into a number of doors and people's shins on the way to the X-ray room. I gave up trying to sit properly and drew up my injured foot into the seat so it wouldn't accidentally smack something. And then I had to go back to the hotel and try to explain to my mom why she shouldn't be worried that her cherished youngest daughter had injured herself on a hike that she had specifically told me would probably be dangerous and result in an injury.

So, yes, revenge for the travesty known as 2016 is needed. I am ready to go into the new year with my head held high and a defiant gleam in my eye that will dare 2017 to even try what 2016 did to me and those I held dear. And even more, I am going to personally make sure 2017 is better than 2016 by trying to be the very best person I can be, while also avoiding my car and hiking in waterlogged mountains. 2016 won't know what hit it when, at the end of 2017, I look back on the year and fist-pump a-la-The Breakfast Club into the sky with my personal and professional success. But of course, there is no better way to seek such pointed revenge than with a cocktail in hand. I believe tou can take down your mortal enemies and conquer your greatest fears looking stylish and cavalier, as one is wont to do when holding a cocktail.

This cocktail shows up in Lupin the Third Part 3. If you've never heard of this show before, what rock have you been hiding under? Has it been able to shield you from the horrors of this year? Sweet summer child. Luckily, this show is actually awesome, and is worth checking out. It's an oldie, but a goodie, and one of my favorite anime is a spinoff of this series. Lupin the Third is about an international thief who makes it his mission to steal the world's most prized possessions. In this particular episode from Part 3, Lupin meets a gorgeous American woman who is *SPOLIERS/ NOT REALLY A SPOILER* seeking revenge. He makes this mystery drink for her, as a bartender, which is his disguise for the evening. Since there was no real recipe to go from, I decided to take what I saw and run with it. Revenge is sweet, but also bitter. The liquid here is pink colored, with a cherry and an orange. Those two fruits reminded me of and Old Fashioned cocktail, so I decided to riff on that recipe by making a drink suited to the woman it was created for- my version of this drink is slightly sweet, slightly bitter, and has an American twist (I used bourbon). 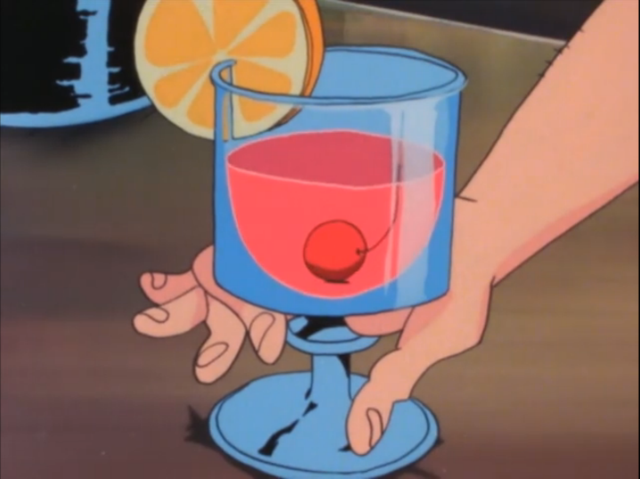 If you're looking for revenge, as I am, then this drink will help you do it. At the very least, it might make you forget why you wanted revenge in the first place. Happy New Year! I hope you are able to settle your scores and achieve your dreams. With a whole year ahead of us, we've got a lot of time to make it happen. (Also, remember to drink responsibly! And if you are underage in your country, please don't break any laws.)

Check out the video below for a visual on instructions. Ingredients are listed just below.

1. Pour the bourbon, orange bitters, and maraschino cherry juice into a shaker with ice.

3. Pour into glass and garnish with cherry and orange slice.

I hope you enjoyed this post! Check in next week for another recipe. To check out more anime food recipes, visit my blog for more anime and manga themed food. If you have any questions or comments, leave them below! I recently got a twitter, so you can follow me at @yumpenguinsnack if you would like, and DEFINITELY feel free to send me food requests! My tumblr is yumpenguinsnacks.tumblr.com. Find me on Youtube for more video tutorials! Enjoy the food, and if you decide to recreate this dish, show me pics! :D
In case you missed it, check out our last dish: Sukiyaki from "Princess Jellyfish". What other famous anime dishes would you like to see Emily make on COOKING WITH ANIME?
Tags
lupin iii, revenge cocktail, cooking with anime
« Previous Post
Crunchyroll To Stream Second Season Of "Rewrite" Anime
Next Post »
Holy Emperor Thouzer Aims to Rule the Cola World
Other Top News
2 Comments
Sort by: