FEATURE: Found in Translation - Who is the God in "Saga of Tanya the Evil"? 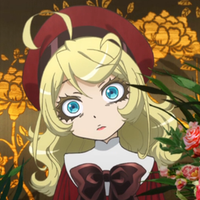 NOTE: This article contains spoilers for the first two episodes of Saga of Tanya the Evil. Watch the anime here.

Saga of Tanya the Evil has a rather unusual premise, to say the least. Anime has its fair share of child soldiers, but a nine-year-old girl becoming a military leader has to take the cake. I was as surprised as anyone to find out how the narrative justified its premise. It actually makes sense when you consider the themes of the story.

As it turns out, our protagonist was a ruthless salaryman in her past life. Just as an embittered employee pushes the salaryman in front of a moving train, the salaryman talks to a mysterious entity called “Being X.” And in the course of this conversation, he somehow provokes Being X into making his next life as unpleasant as possible. Not only is the salaryman thrown into a war-torn world, he is also reborn as the weakest member of this world’s society—an orphaned little girl. 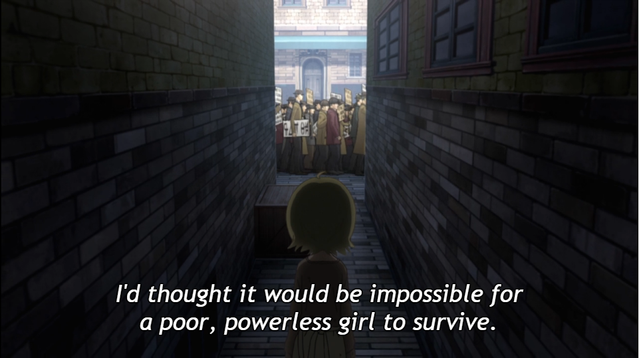 The interactions between Tanya and Being X are crucial to the plot of Saga of Tanya the Evil. From what I have read of the novel, I expect the question of religious faith to be a recurring theme of the story as it goes forward. Naturally, this begs the question: who is Being X? What purpose does religion serve in the world of Saga of Tanya the Evil?

At first glance, Being X appears to have a strong resemblance to the Judeo-Christian God. After the salaryman is pushed in front of the train, time stops, and the people in the crowd begin to talk to him in the voice of Being X. The first thing that Being X mentions is the moral decay of human society. 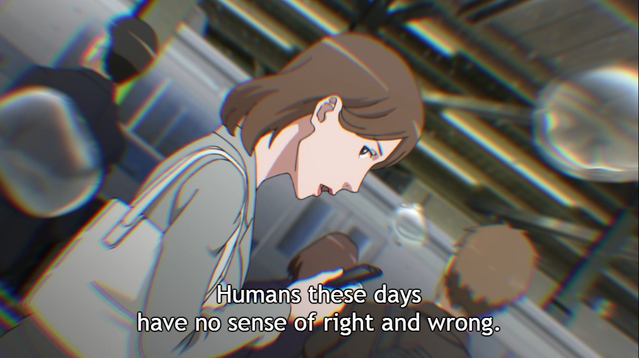 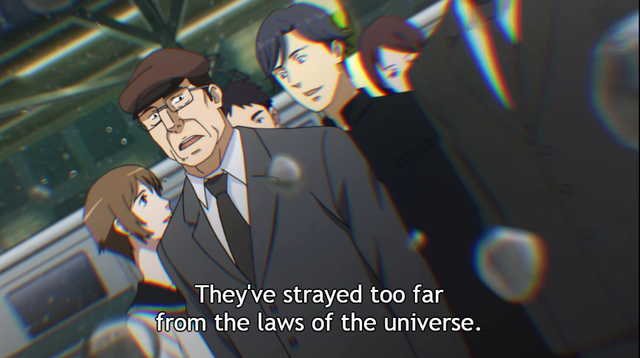 This makes Being X sound like a god, and an angry one at that. When the salaryman asks if this is a god speaking to him, the voice replies, “Indeed.”

The Japanese word translated as “god” here is神 (kami), which doesn’t necessarily refer to the Judeo-Christian God. Japan has a long history of Shintoism, and the word kami can refer to the numerous gods worshipped at local shrines. However, in this case, Being X also uses the word “Creator” (創造主), which makes clear that the story is referring to a “God” with a capital G. The fact that Being X sends the salaryman to a land resembling Europe also seems to indicate that the deity has a Judeo-Christian worldview.

However, things are not quite that straightforward, especially when we pay closer attention to what Being X says. 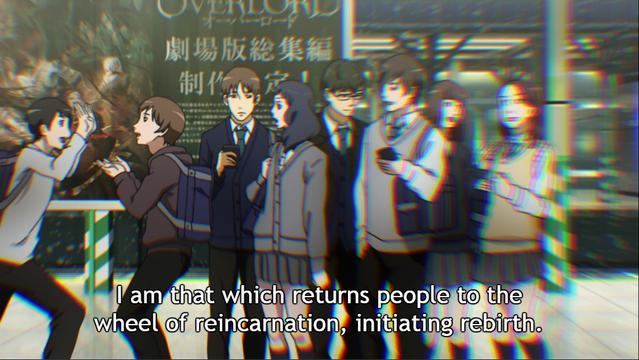 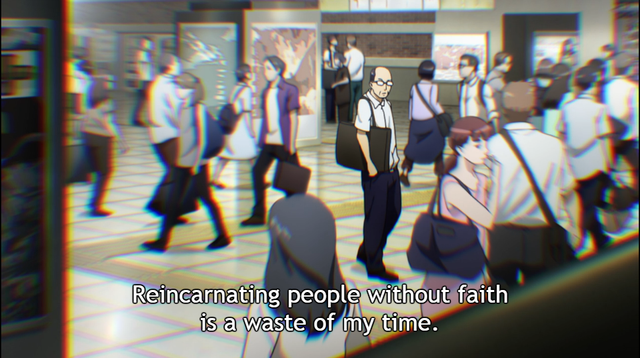 The wheel of reincarnation—rinne. This is the Japanese word for the Buddhist concept of Saṃsāra, which refers to the endless cycle of death and rebirth. Apparently, instead of accepting people in heaven, Being X reincarnates people who have faith. This is a departure from both Judeo-Christian and Buddhist cosmology, because reincarnation is supposed to be a never-ending, repetitive cycle. In fact, the cycle of reincarnation is perpetuated by a person’s ignorance, and the ultimate goal should be to escape it. The existence of a deity figure that allows people to be reborn if they are faithful is unorthodox, even heretical.

This may be why the salaryman likens Being X to a devil. “Thinking logically,” he says, “only God or the devil could exist beyond our knowledge of the world. But hypothetically, if God were to exist, he would never let this absurdity happen.”

And to be fair, the salaryman may have a point, given how Being X toys with the salaryman’s fate so sadistically. If Being X is God, then he is a twisted God. The exchange between the salaryman and God brings up another important question, however. Was it humans that made God so twisted? 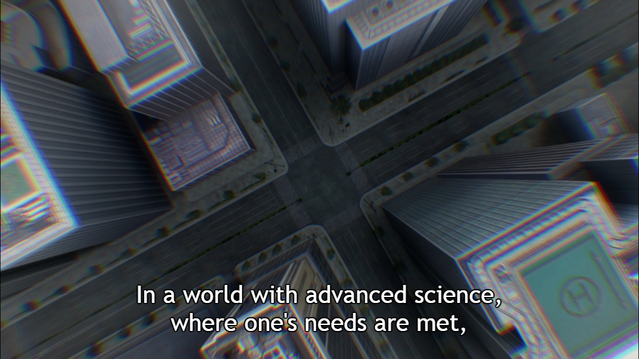 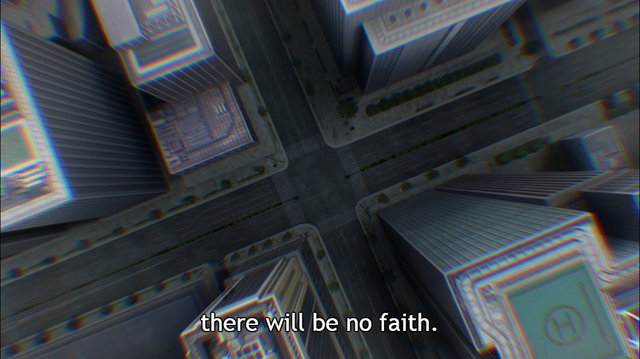 When the salaryman tells Being X that Japan has become a faithless society because it is a first world country, the deity responds by taking away all of the salaryman’s material privileges. “If I put you into the ‘dire straits’ you speak of, your faith will awaken?” Being X asks.

And at this point, a very interesting thing happens. The salaryman loses his smug coolness and starts to panic. “I don’t intend to break any rules!” he insists.

I believe that this line gets right to the heart of what “faith” means in the world of Saga of Tanya the Evil.

In Japanese fiction, the salaryman often represents the “common sense” of Japanese society. Though he may be dull and lacking in individuality, he follows the rules and guarantees an income for his family. Sometimes, this image of an ordinary white collar worker is idealized as the bedrock of middle class sensibilities, but these days, it has become a figure of parody and absurdity more often than not. In the film Tokyo Sonata (2008), for instance, the salaryman continues to wear his suit even after he has been laid off work. Even when his life takes a turn for the surreal, he continues to wear that suit, as if his respectability is more important to him than his life.

In a faithless Japan, the salaryman represents an almost irrational faith in an ideal social order. In Saga of Tanya the Evil, the salaryman even draws attention to this fact himself: 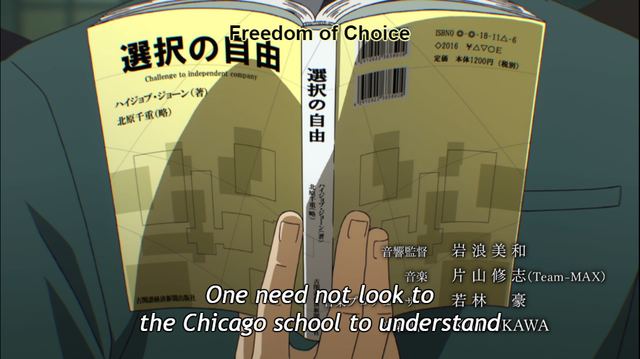 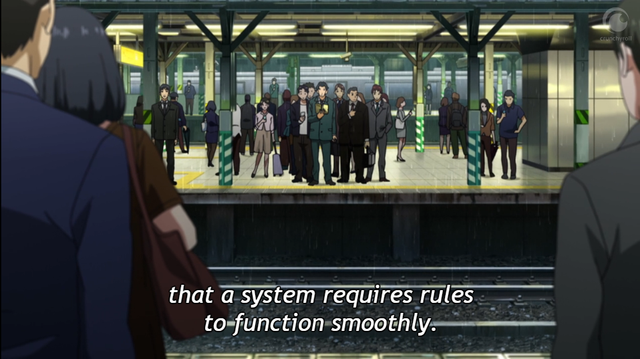 Also note the title of the book the salaryman is reading: Freedom of Choice. This sets up the theme of his dialogue with Being X. By following the rules of his society so slavishly, is the salaryman really exhibiting the freedom of choice? Isn’t he, in his own way, a religious fanatic? In my view, it is not important that Being X represents the deity of an identifiable religion so much as he is a symbol of the unexplainable. The salaryman, by contrast, represents a belief in what is seemingly logical and rational but is really absurd and irrational.

The confrontation between the salaryman and Being X sets the stage for an ongoing clash of ideologies. Stripped of the material benefits of modern Japanese society, will the salaryman’s principles prevail in an irrational world where magic is commonplace? Or will he be forced to admit that an unreasonable God really does exist? Incidentally, the title of episode 3 translates to "That is what God wishes for."

Needless to say, I’m really curious to see where this goes.