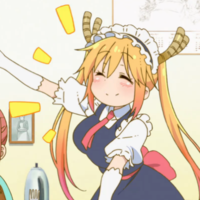 Dragon tail...no, no. Not the formative children's show you probably watched in your youth (at least in America). No, today we're talking about Dragon TAIL, as in, the appendage (is that the right terminology?) found on mythical (are they, though?) creatures.

In the first episode of Miss Kobayashi's Dragon Maid, the titular dragon is trying to prove that she can earn her keep as a maid for Miss Kobayashi. Very adorably, she proves herself competent at a variety of house skills, such as cleaning and doing laundry. She can even remove poisons from large hunks of meat! Why would she need that skill, you might ask? Well, because she decides to cook up HER OWN TAIL, which is naturally poisonous. 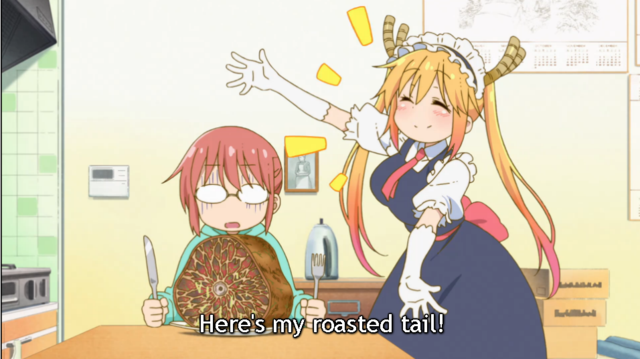 The answer is, of course, that dragons are so rare and mythical that you can't actually buy dragon meat in the grocery store. Since I am severely lacking in the tools and skills necessary to hunt down an actual dragon, I turned to Twitter to find the closest substitute possible.

All my Twitter pals were very helpful in highlighting a type of meat that is so far out of the possibility for me, it might as well be actual dragon meat. Not that I didn't appreciate the help- I found it to be quite fun to speculate as to how many calories a dragon would burn while flying vs walking. And alligator tail sounded like a great idea. The thing is... I don't know about where you live, but in California, ALLIGATOR MEAT IS NOT A NORMAL SELECTION AT THE GROCERY STORE.

In fact, a lot of meat is not available at the typical grocery store in California, likely because a lot of people in California like to eat vegetables and fruits and things of that nature. Also, I live in a college town, where the majority of people here will settle for a cold Chipotle burrito due to their inability to boil water on their own. It's a rather small college town, so even for the people who can cook, the selection is limited because demand is, as outlined above, not exactly high for rare and speciality meats.

All of this has only convinced me more that I need to move to a more populated part of the state.

So, what was I to do? I decided to wander Whole Foods, the store with the best meat selection in town, to see what they had in the way of extremely large hunks of meat. And, the only thing I could find that would fit the bill was a chuck roast. Not exactly the most impressive of meats. To be clear, if I had more of a choice, I would have gone with a different cut of meat. I think a veal shank, though a little small, would make for a great selection. But, with very little options, I used what was available to produce a truly delicious "dragon tail" recipe. The meat, roasted to juicy, succulent perfection, is garnished with a bright green herb sauce that evokes the green scales of a dragon. If you wanted, you could even mix in edible gold glitter (which I have, and which I am honestly kicking myself for not including) to make it sparkle and shimmer, sort of like the sauce from the anime. Even better, the whole dish is actually pretty easy to make, since most of it involves waiting around for the huge chunk of meat to cook.

Check out the video below for a visual on instructions. Ingredients and picture instructions are listed just below.

1. Preheat the oven to 275 Fahrenheit for the roast. Roast the pepper over a flame, or in the oven, until skin is blistered. 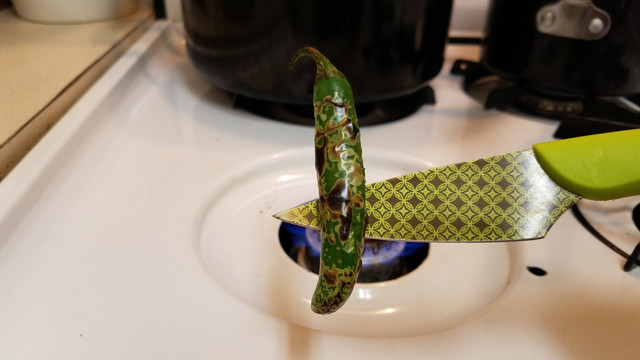 Put all ingredients for Magic Green Sauce, including roasted pepper, except for oilve oil and salt, into a food processor and blend together. When finely chopped, Drizzle olive oil in until the consistency is to your preference. Flavor with salt. 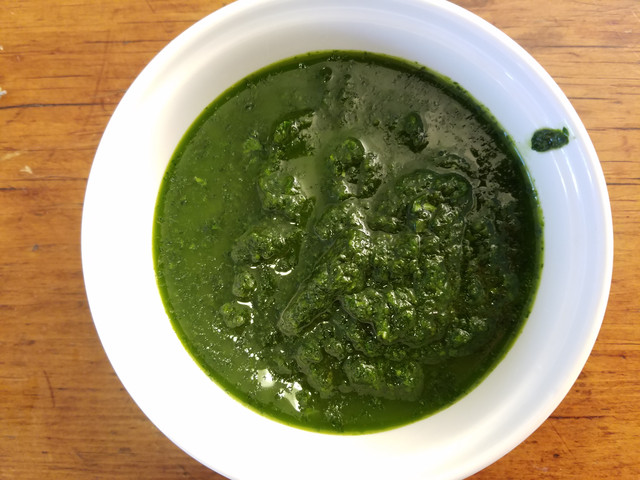 2. If using, roughly chop onion and carrots to cook with the meat. 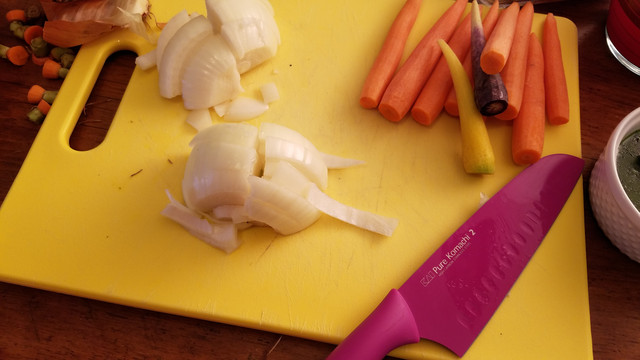 4. Season each side of the roast with salt and pepper.

5. Heat up some olive oil in a dutch oven. Brown the onions, about 3 minutes, and then brown carrots, about 2-3 minutes. Set vegetables aside on a plate.

6. Add more olive oil to the pan and bring up to a very high heat. Sear each side of the roast, ~1 minute per side, until nicely browned. Then, set aside on a plate. 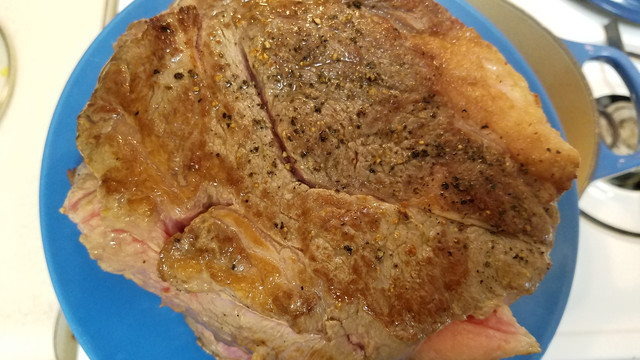 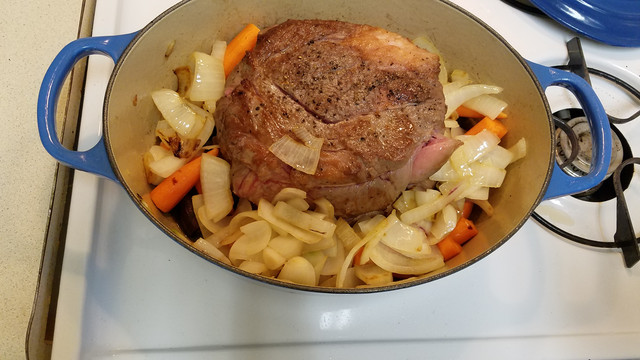 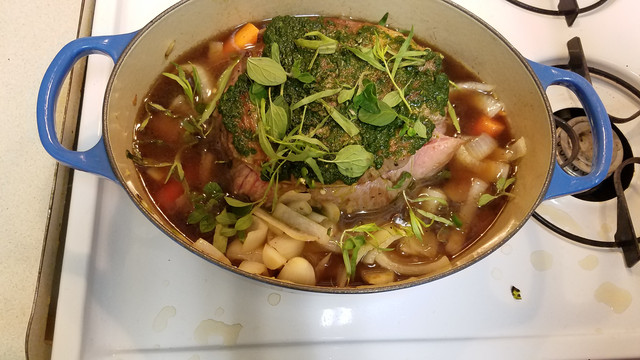 9. Place in the oven ~3 hours, or until it is tender and falls apart easily when attacked by a fork. 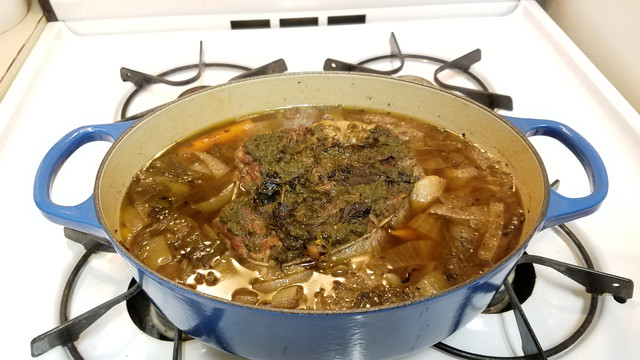 10. Remove from pan, and cut into slices. Garnish with more Magic Green Sauce. And now it's done!! 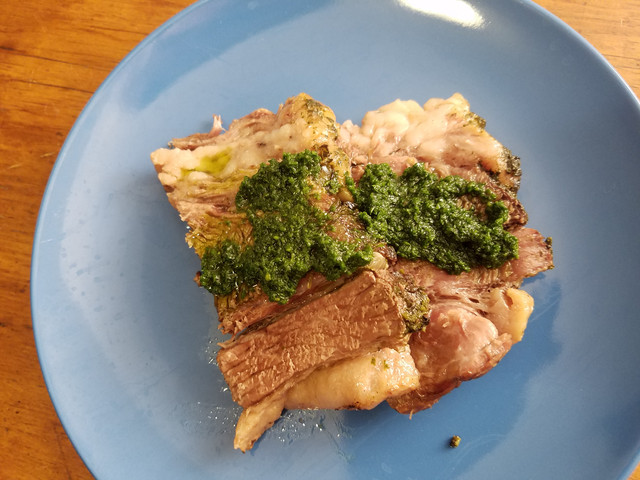 I hope you enjoyed this post! Check in next week for another recipe. To check out more anime food recipes, visit my blog for more anime and manga themed food. If you have any questions or comments, leave them below! I recently got a twitter, so you can follow me at @yumpenguinsnack if you would like, and DEFINITELY feel free to send me food requests! My tumblr is yumpenguinsnacks.tumblr.com. Find me on Youtube for more video tutorials! Enjoy the food, and if you decide to recreate this dish, show me pics! :D
In case you missed it, check out our last dish: Giant Burger and Fries from: "ACCA: 13 Territory Inspection Department. What other famous anime dishes would you like to see Emily make on COOKING WITH ANIME?
Tags
cooking with anime, miss kobayashi's dragon maid, dragon tail
« Previous Post
"A Rose in the Twilight" Ventures Forth with New Gameplay Footage
Next Post »
Watch OxT Rock "Overlord" Compilation Movie Theme
Other Top News
12 Comments
Sort by: