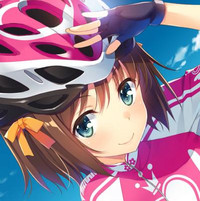 It’s high season for cycling anime right now, as we’re treated to a total of three shows about biking this season (technically it’s only two, but Long Riders only ended just recently after some production hiccups). But it's not only cycling anime that are fashionable at the moment. Kamakura currently seems to be the most popular anime setting of the season, since the city is getting featured in three different shows this winter season – Interviews With Monster Girls, Fuuka, and Minami Kamakura High School Cycling Club. I’ll cover the first two soon enough, but today’s installment of Anime vs. Real Life is going to focus on the real-world locations of Minami Kamakura High School Cycling Club.

Like I mentioned in my last article about the show, Minami Kamakura High School Cycling Club boasts some of the prettiest background art this season, which adds a lot to the show’s overall comfy and lighthearted atmosphere. The high-quality backgrounds also bring out the best of Kamakura, so let’s get right to the comparison shots!

In the second episode, which is appropriately named ‘Go Explore Kamakura!’, Tomoe shows Hiromi around town, so they start out in front of Enoden Kamakura Station. Machi and Takahasi-sensei from Interviews With Monster Girls also pass by here during their experimental date.

Both of these locations are along the Wakamiya Oji street, which also serves as Kamakura’s main avenue and approach to the Tsurugaoka Hachimangu Shrine. However, Hiromi, Tomoe, and their teacher are headed southwards to the beach.

The real-life Lawson convenience store got turned into a FamilyMart in the anime. I doubt Lawson is going to be happy about that.

Salty Dogs (the wooden building to the right) is a windsurfing store in Kamakura.

The gang takes a quick break at Chikaramochiya, a Japanese confectionary shop, which is close to the Goryo Shrine.

The main hall of the Goryo Shrine – the shrine is most noted for its beautiful hydrangeas, and is dedicated to the samurai Kagemasa Gongoro Kamakura. The shrine is located close to the famous Hasedera Temple.

Especially peculiar about the shrine is how the Enoden train tracks are only situated a mere meter away from the front gate, as shown in the picture above.

Airhead Hiromi borrows Tomoe’s bike, and wants to explore the town a bit on her own, which - as you can imagine - does not turn out too well. However, she does pass by some interesting locations: like this souvenir shop in front of the Kotokuin Temple grounds, where Kamakura’s Great Buddha is located. The last time I was in that shop I bought a couple of Daruma dolls.

Goryo Shrine’s purification fountain to the left and part of the shrine’s front gate to the right. Sadly, there’s no shocked Tomoe in real life.

I personally enjoy Minami Kamakura High School Cycling Club quite a lot, but I just wish Hiromi wouldn’t be such an airhead all the time – and that the show would dial back the lucky coincidences a bit. Chasing a squirrel through an unfamiliar town while leaving your cellphone behind and randomly meeting Tomoe’s grandmother and little sister on the way, just to be saved by the teacher’s sister are a few too many coincidences in a single episode.

The show’s Bakery Flat/Cycling Flat building doesn’t seem to exist in real life, but it would’ve been located somewhere along the seaside of Kamakura’s Sakanoshita area.

Hiromi finally ends up at the Sasuke Inari Shrine, which is an estimated 2km away from the Goryo Shrine.

The Sasuke Inari Shrine was built by the founder and the first shogun of the Kamakura Shogunate, Minamoto Yoritomo. There are a few variations of this story, but legend has it that Yoritomo was visited by an Inari fox messenger in a dream, in which it advised him of the timing to begin attacking his enemies, thus guaranteeing victory. After becoming Shogun, Yoritomo built the shrine in gratitude.

The shrine also has a beautiful tunnel of red Torii gates.

Yuigahama Beach in Kamakura and Enoshima Island in the back. If you are currently watching Fuuka, this is also where the whole ‘beach hut arc’ took place.

In the third episode, the school’s director reminisces about her own adventures with the cycling club, while showing the new club old pictures of her trips. They made it as far north as Hokkaido, and in the south they visited Kagoshima and the still active Sakurajima volcano. Kagoshima was also one of my highlights during my last trip to Japan, as I visited some of the DAYS and Love, Chunibyo & Other Delusions locations in Kagoshima.

The cycling club also visited Kochi Castle in the south of Shikoku. By the way, Kochi Castle is only a few minutes away from the model school for Masamune-kun’s Revenge.

Half of the fourth episode was about the uphill bicycle race between Hiromi and the school’s swim team captain. The race takes place just outside of their school, so there's really not a lot to say about these shots, but they do match stroke for stroke mostly.

The building to the right with the blue roof is a Hawaiian restaurant called Pacific Drive-In.

I also always like to check anime speed limit signs, but both the speed limit in the anime and real life are 30km/h here. Good job, J.C. Staff! March comes in like a lion once turned a 20km/h zone into a 60km/h one.

The building in the back is part of the Kamakura Prince Hotel.

Behind the small hill is the Shichirigahama Golf Ground.

Have you ever been to Kamakura yourself, or do you know any other anime that feature Kamakura? Leave a comment!