FEATURE: Why It Works: Dragon Maids and Magical Realism 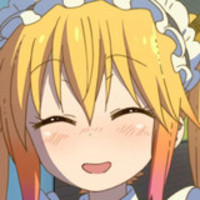 Hello everyone, and welcome back to Why It Works! Today we’ll be talking about Miss Kobayashi’s Dragon Maid, a show whose ridiculous premise is baked right into its title. Dragon Maid exists in a strange world where dragons exist, sometimes dream about destroying humanity, and sometimes end up being roommates with humanity instead. Its absurdity and fantastical assumptions are plain for all to see, but Dragon Maid isn’t really a “fantasy” in a traditional sense. In fact, the show can at times feel remarkably mundane, dedicating long stretches of episodes to conflicts like getting supplies for school or choosing a new apartment. It doesn’t really explain how dragons came to exist in this world, but it’s very insistent on the need for dragons to get their personal identification properly filed. Dragon Maid exemplifies the power of “magical realism,” and just how it articulates that power is our topic for today! 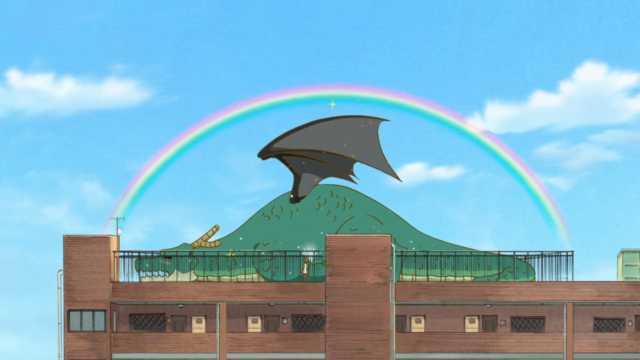 Magical realism is a subgenre with another fairly self-explanatory title. In contrast with works of pure mundane realism, or works that entirely embrace the dramatic and worldbuilding tenets of fantasy, magical realism tends to mix a realistic world with fantastical embellishments. The world of a magical realist story is generally a mostly understandable but occasionally inexplicable place, where the plain nature of everyday life makes the moments of magic that much more special. In a work of magical realism, two sisters might be distinguished by one’s lovely voice and the other’s tendency to attract butterflies wherever she goes (to paraphrase from one of the genre’s masterpieces, One Hundred Years of Solitude).

Just looking through the Wikipedia entry for magical realism demonstrates some of the ways Dragon Maid embodies the term. The mixture of fantastical elements and grounded worldbuilding are obvious, but less overtly purposeful are things like the show’s unwillingness to tether its fantastical elements to mundane explanations, or how dragon-ness is applied as a clean metaphor for social difference. I could see audience members getting frustrated with how fast and loose Dragon Maid plays with its fantastical elements, since generally dragons and their draconic nature are the most exciting thing in any given story. But the relative grounding of different elements in Dragon Maid is ultimately crucial to its intended dramatic effect. 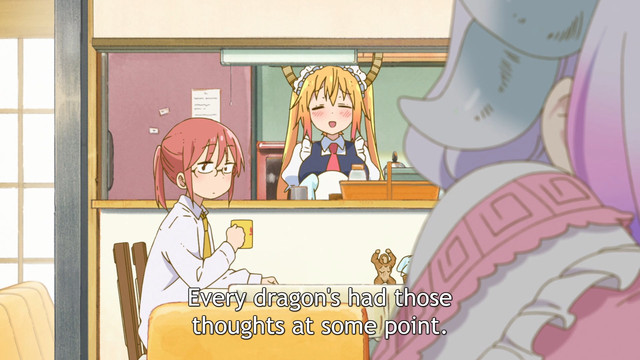 Dragons aren’t really the point of Dragon Maid - they’re more the setup or punchline for comedy. Human characters act surprised by dragons, but only briefly, and rarely in any way that has real dramatic consequences. Problems that could theoretically be solved by dragon powers - like, say, Miss Kobayashi having to work for a living - never have draconic abilities applied to them. Overall, being a dragon never really comes across as much of a plus or minus in Dragon Maid - it’s just something about you, like your hair color or favorite food.

That’s not an oversight, and definitely not a “plot hole.” Dragon Maid downplays the efficacy and consequences of dragon-ism not only because dragon-ism is irrelevant to its dramatic goals, but because acknowledging dragons as meaningfully different and uniquely powerful beings would unbalance the show’s sense of dramatic consequences. Dragons are one thing, but the problems these characters care about are quite another. 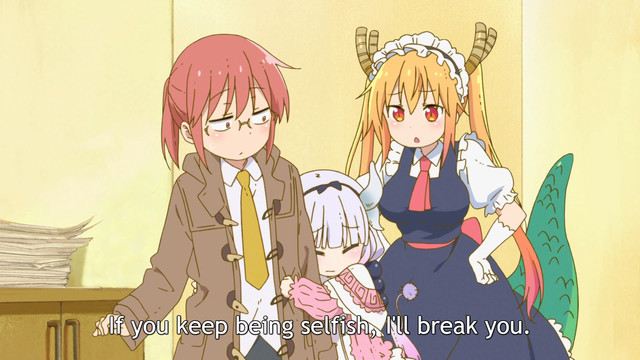 So what problems does Dragon Maid care about? Generally, it’s the little things. It sounds odd, but perhaps Dragon Maid’s greatest strength is its consistent ability to realize both the tangible mundanity of its world and the beauty that can be found in that mundanity. The show takes time to make sure the audience can understand things like Miss Kobayashi’s subdued problems at work, or Kanna’s difficulty adjusting to life at school. Treating the characters as actual dragons would make it difficult for the audience to invest in such drama, but by giving these characters’ problems the same consideration they themselves do, the show is able to make the mundane feel absolutely meaningful.

It’s a credit to both the character writing and visual execution that Dragon Maid is able to find such poignant drama in such everyday moments, even with actual dragons floating around and blowing each other up. Conversations between Kobayashi, Tohru, and Kanna are given time to spool themselves out, letting the characters’ anxieties become real through hesitant confession instead of big dramatic reveals. And the show’s consistently remarkable gesture work makes its characters’ personalities feel visible in their every action, giving them a sense of visual identity and consequence. 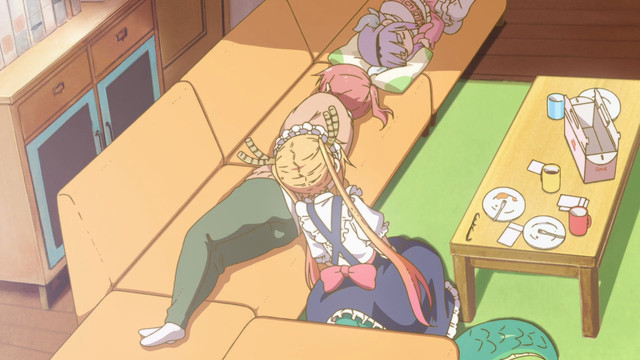 Ultimately, Dragon Maid’s emphasis on the mundane over the magical implies a kind of parity between the two, which is one of the strongest effects of magical realism. When your world is a mix of the magical and the mundane, and the drama doesn’t favor the fantastical over the everyday, it becomes clear just how much magic there is in our daily interactions. The world is full of strange and inexplicable things, but where we find the magic in it is always in our own hands.