FEATURE: Humanity's Worst, Front and Center on the Anime Stage 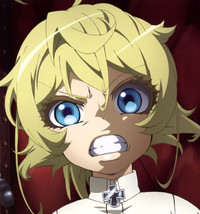 Humanity's Worst, Front and Center on the Anime Stage

There is a sadistic thrill that comes with watching people acting against our ingrained sense of morals, or better yet, against society's standards of good in favor of our secret rebellious desires. When Lupin the Third came on the anime scene in the early 70's, with its titular pragmatic thief, it was a huge shift from the model of protagonists who embodied the forces of absolute moral good. Even the punks who so often popped up as the stars in early sports classics brought a bit of that wild side out in the show, let alone more aggressively amoral characters like the swashbuckling interstellar Cobra or the hitman Golgo 13. Flash forward to 2017, and as if an old otaku made a poorly worded deal with the devil we got a season of protagonists who moonlight as terrible human beings, with both hilarious comic headliners and bone-chilling pragmatists coming to call. These are their stories. 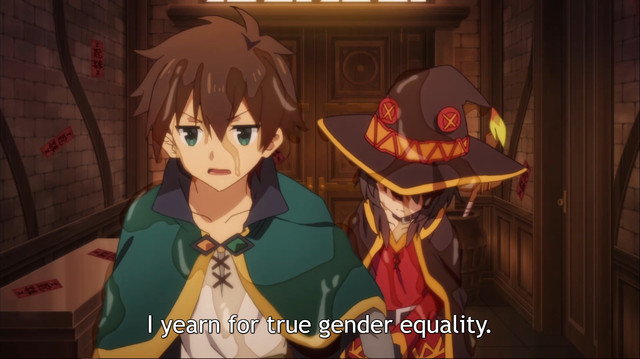 Back in the 80's and 90's, prominent writers such as Rumiko Takahashi and Yoshihiro Togashi noticed that if they wanted to make their protagonist funny, one thing they could do is make their protagonist kind of a dick. Characters like Yu Yu Hakusho's Yusuke Urameshi, Ghost Sweeper Mikami's Tadao Yokoshima, and Urusei Yatsura's Ataru Moroboshi were all generally moral people, but had many of the failings one would expect of a teenage boy: perverted, insensitive, and just generally causing trouble. Again, they had a baseline morality usually shown through their devoted love interest, who indirectly acted as their anchor, someone who brought out the best in our hopeless hero.

The first show on our list, KONOSUBA -God's blessing on this wonderful world!, tosses that morality out the window, and instead of a love interest just lets the whole harem get in on the amoral fun. Adventurer Kazuma Satou is just as lecherous and abrasive as any rom-com hero, but instead of a soft spoken heroine to bring out the non-existent goodness in his heart, he gets three companions at least as bad as him. It turns out having characters who are generally good on the inside is better for character development and storytelling, but when you take that away from them the result is plain hilarious, especially with the sense of comedic timing the show has honed over its last season. 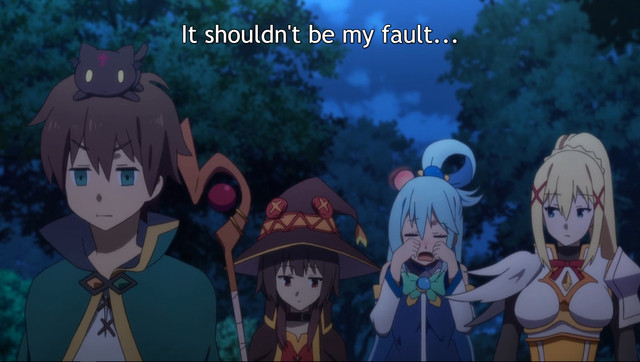 Of the three the show mostly centers on Aqua, the goddess Kazuma forcibly brought on his adventures. She is the only one in the show with a tongue as sharp as Kazuma's, and neither of them will let the other's failures go unnoticed, nor their own successes go without a good long stretch of gloating. When Aqua purifies a great spirit rooted to the world against his will, she spends the rest of the episode reveling in her almighty powers as a goddess right in front of Kazuma's face; when it turns out the purification also set a horde of monsters upon the city in the process, Kazuma's insults bring her to the verge of tears.

The other two provide endless fuel for Kazuma's morally abhorrent personality too. While the masochistic holy crusader Darkness left the center stage for a while at the start of this season's KONOSUBA -God's blessing on this wonderful world! 2, she is back and in rare form, having gone so far into the realm of fetishizing her own pain and humiliation that Kazuma can no longer even insult her without feeding her complex further. The crowd favorite, the explosion junkie Megumin, has also been stepping up as perfect fodder for Kazuma this season. It's a mark of both great writing and the author's particular penchant for creating human trash when the show's greatest exposition thus far this season is that Megumin spent her younger years taking some kid's lunch money after class.

And maybe it's a mark of a good anime season that she isn't the only character stealing people's lunch. One of the more popular romantic comedies this season, Masamune-kun's Revenge features a burgeoning couple who would be right at home with the KONOSUBA -God's blessing on this wonderful world! cast. I say burgeoning because they aren't a couple at the start of the story, nor do either of them like each other, and not in a simple Ranma ½ -style tsundere mismatch. Masamune Makabe wants nothing more than to be asked out by the school idol Aki Adagaki, who is notorious for hating men and rejecting them in cruel and mortifying ways. His motivation? To mortify her right back, the girl who teased him when they were kids. He completely reworked his appearance to the point where he's a heartthrob among the girls, but he passes up his chances at love for that one shot of sweet karmic justice.

And despite how comically petty he is for even trying, Aki sells herself as such a terrible person that we can't even blame him. Besides sticking all the boys who ask her out with insulting, albeit meticulously researched, monikers, she also eats both her share of lunch and most of her best friend's bread on top. Good for her that she eats healthy, but the self-absorbed way she orders her friend to buy her more food, away from the prying eyes of the other girls who respect her so highly, makes us want Masamune to take her down a peg too.

Or such is the premise. In reality while KONOSUBA -God's blessing on this wonderful world!'s cast is designed to be irredeemable, as we dive a bit deeper into Masamune and Aki we get to see a bit of their softer sides, on guard due to their past experiences (with each other), but prone to slipping up all the same. Masamune, focused on his revenge plot, learns through shoujo manga and botches his plans so often and so thoroughly that he ends up needing coaching from an insider in Aki's life. Meanwhile Aki is so clueless that she not only proudly wears cosplay to her first “date” with Masamune, but she derides him for thinking that that's wrong. As they both continue to hurdle towards ruining each other's lives again, the comedy and romance we're treated to is sometimes enough to hope they learn to be less petty and narcissistic, or it would be if it weren't so amusing to watch their misguided battle.

But not all this season's terrible people are funny. Sometimes being registered as a terrible person implies something more akin to that title. Sometimes we are given a character who is genuinely morally repugnant, the kind of person who would get their family killed for a dollar and a pat on the back. These are the people outside the realm of 80's comedy; these are the people who would more likely show up on a police blotter, or worse, a thousand documentaries asking what went wrong. Thankfully in Saga of Tanya the Evil, it's easy to see what went wrong: someone gave that person a gun, a uniform, and an incentive to kill. 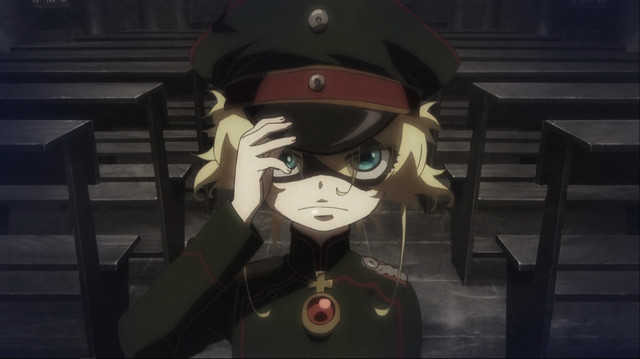 When even the title registers Tanya, a girl who was given too much power in the army as a result of her abnormally developed magical powers, as “evil,” there's a pretty clear message being sent to us the viewers. There is little to no room for sympathizing with her, which is made worse by the fact that we understand her completely. She is vindictive, setting up a group of soldiers who disobeyed her to be killed by the enemy in the next attack. She chooses every word to better her chances at staying safe and away from the front line, whether it be to her superior officers or to her friends celebrating a new birth in their household. We see her pushed to the brink of death in a fight, and we see the unbridled joy she feels at letting her powers loose on anyone who bleeds red and looks at her the wrong way.

But we also see her slip up, either tricked by those who are wise to her manipulative words or tripped up in her own ambitions. As Tanya is rising to power, the show is shaping up to be something we don't see to often in anime: a classic Greek fall from hubris. As we dive into her thought processes and motivations, we start to see all the fatal flaws that will inevitably come back to her, all the ways in which she won't learn from her mistakes while they're small. Besides the well-choreographed action and the detail put into Tanya's crazed facial expressions, the true gem of the show is watching Tanya's character, as a textbook case in greed, ambition, psychopathy, and if all goes well, in a fall from grace. 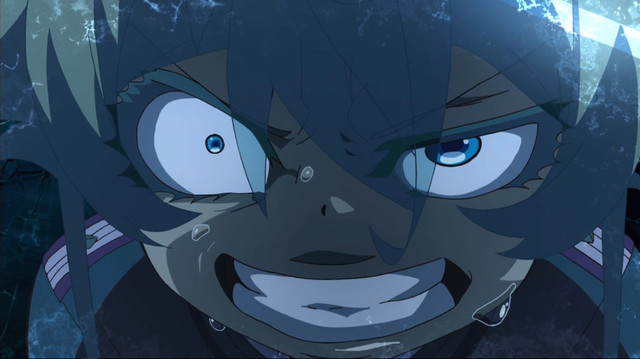 On that note, I would be remiss to not at least mention the crown jewel of this season's lineup of amoral characters. I read the manga for Scum's Wish a few years ago, and was thoroughly caught up in how shockingly awful—yet shockingly believable—the entire cast was. Each character sets out to outdo the last, while at the center lies a single doomed couple: Hanabi Yasuraoka and Mugi Awaya, the power couple of the school. To their friends and classmates both of them are perfect, and perfect for  each other. But they share no love between them; both are only out to soothe their loneliness over loving someone else. For Hanabi it's her brother, a schoolteacher who has a crush on Mugi's tutor from afar. For Mugi of course, it's that very tutor, who seems aloof to the whole situation save for being very attuned to Hanabi's moods. 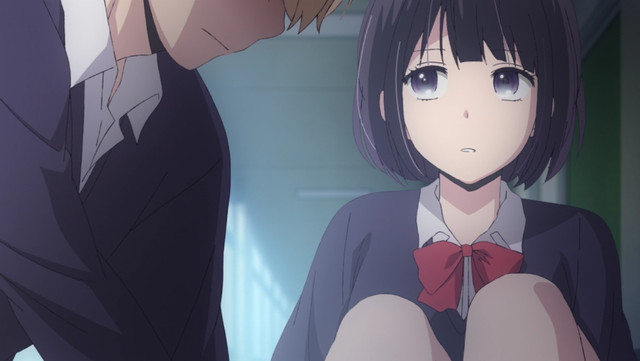 A love polygon develops with these four and a whole slew of their friends, each of whom is willing to use, bully, and manipulate one another to feel just a little less lonely in the world. Just as surprising as the explicit sexual encounters between the characters are the ways in which the script captures their thoughts, their disgusting and distasteful ways of getting one another to give up their other loves, their other friendships, even their mental state of being. It's not haphazard, nor is it solely a statement on the evil in people's hearts. It is perfectly balanced and calculated to show their desperation, and how they try to navigate love and friendship in the wrong way. 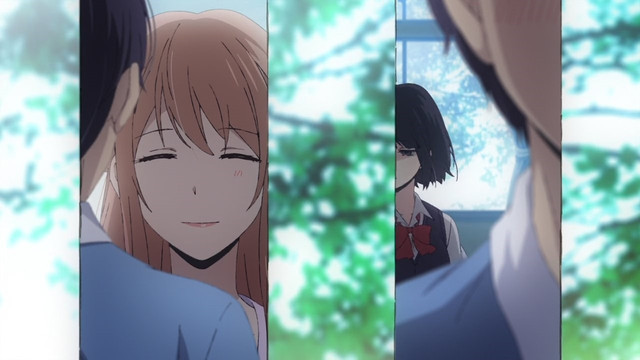 This season's adaptation adds an additional layer to the manga, namely framing it as tragic. In particular Hanabi's character flaws are downplayed in comparison to the other characters, and she serves as the main focus through which we see the story, which develops her character so well that despite having seen her original manga personality I even started to feel bad for her at some point. Soft watercolor notes in the artwork, reordering events and changing up the pacing, and good use of soundtrack make her romance with Mugi into a fully fledged romantic tragedy, one from which there's no straight answer, with no clear line between bad people and misguided friends, as both bring her pain all the same.

The following series are available for viewing NOW on Crunchyroll!

Ian Mertz is a graduate student in Toronto. He works in Computer Science though, so don't take his opinions on anime too seriously.