It's time to review one of the biggest anime movie events of the year! 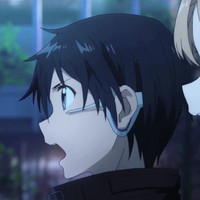 Some movies are made for a single moment.

For Sword Art Online: Ordinal Scale, that moment is when Yui appears in the middle of the film's final battle—a showdown with the boss of the Aincrad Castle's Floor 100—bringing with her all of Kirito and Asuna's friends from stories past. There's a swell of music (the tune's called "let's join swords," and it's a remix of the franchise's most memorable track, "swordland"), and suddenly we see the silhouettes of Kirito's iconic dual blade against the backlighting. Along with back-up, Yui returns to Kirito and Asuna their appearances and weapons from the original Sword Art Online game, and the entire group explodes into frenetic action that carries through until final moment of the battle.

If you have even a shred of fondness for Sword Art Online as a franchise, particularly the Aincrad arc, this moment alone is worth seeing Ordinal Scale for. It's the moment the entire film drives toward, a rush of near-euphoric glee enough to make me scream with delight under my breath in the theater. It's been five years since the first season of Sword Art Online began airing and nearly three since SAO II ended, so it feels like we've been without new Sword Art Online long enough for it to feel like an event of the past (despite the continual chatter following the show since then). This, in turn, gives us enough space from the early days of Sword Art Online, the time when it truly felt new, that Ordinal Scale can actually get away with remembering Aincrad, both as an motion within the film itself and outside it with the fans. 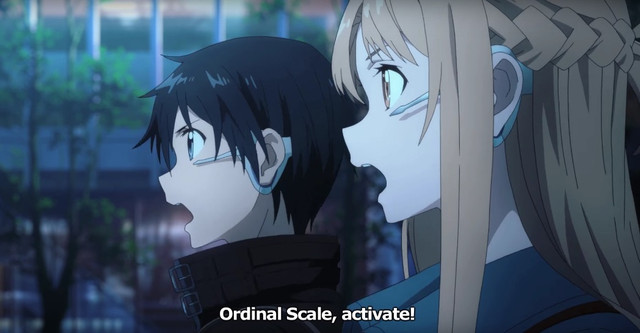 I walk into my local showing of Ordinal Scale about 30 minutes before the film began, wondering what kind of crowd I'm going to see. An awkward pass in front of the screen looking for a seat later, I'm reassured that this won't be like some of my other anime filmgoing experiences, as the crowd is substantial—and boisterous. Occasional laughs about the "super easy" quiz questions rotating on the screen pepper the dull buzz of conversation; I hear one girl mutter "Must get" to herself with a vengeance upon seeing an ad for the recently released SAO mobile phone game. And, although less interested in the welcome messages from LiSA, Haruka Tomatsu (Asuna), and Yoshitsugu Matsuoka (Kirito) before the film begins, by the final corny slow-motion fist pump from Matsuoka, a genuine cheer finally emerges from the crowd before giving way to silence and the movie's opening moments.

I'm no stranger to being a fan of things generally, but as a fan of Sword Art Online (it was one of the first anime I watched once I'd finally figured out what "anime" was and decided I wanted more) it was delightful to see Ordinal Scale speaking a language only those who care about this franchise—warts and all—can understand. In the moment when we see Starburst Stream unleashed once again or Yuuki's spirit embracing Asuna as the Mother's Rosario Sword Skill appears in a burst of purple lights, the film clearly, unavoidably asks but one thing of its audience: "Remember. Because if you remember how you felt when you watched Sword Art Online, this is for you." 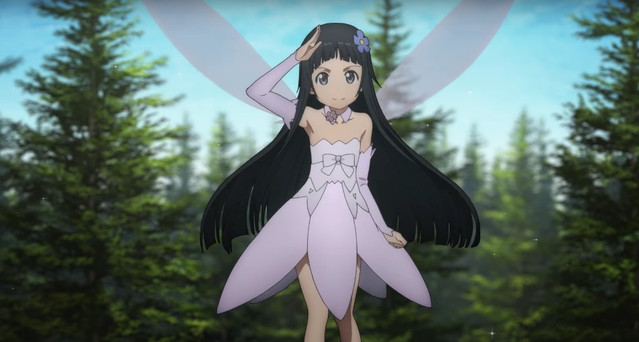 So, that's the fanservice angle, but what's really neat about Ordinal Scale is that it pulls this metatextual conversation with its fans into the actual text of the film itself. The primary conflict in Ordinal Scale is, at its most basic level, one dealing with the importance of memories—specifically those of Aincrad. Memories that are immeasurably painful for some and bittersweet for others. One of Sword Art Online's ongoing themes has been a question of the validity and value of virtual experiences (although this idea's traced an admittedly inconsistent arc throughout the franchise's various stories), and so Ordinal Scale putting Asuna's memories of her time in Sword Art Online (the game) on the line aligns it strongly with this tradition—and, by the end of the film, doubles down on the Aincrad arc's very serious affirmation of the worth of such experiences.

So when Ordinal Scale instructs the audience to dig into their own memories, it marries the meaningfulness of the fan's memory to those that Kirito, Asuna, and their friends hold dear. Whether or not the memories were all good or all bad matters little—rather, the key is that they mean something to them (and, ultimately, carry tangible weight in the real world as well). In some ways this parallels the fan act of immersing yourself in a show, finishing it, and then fondly carrying on the memories of your time in the world with you as you move on with your life—possibly even allowing them to affect who you are as a person. Of course, it's not like this kind of unity between fanservice and themes is anything new, but it's certainly enjoyable to experience it with Ordinal Scale if, like me, you do carry some measure of affection for SAO.

This kind of textual/audience resonance aside, as a film for fans, Sword Art Online: Ordinal Scale succeeds because it reaches for and achieves a single peak of unadulterated fan joy. It can be watched, thought of, and loved purely in these terms. That single shot of Kirito once again becoming the Black Swordsman who saved Aincrad justifies the entire movie. It was the only thing the film needed to do. 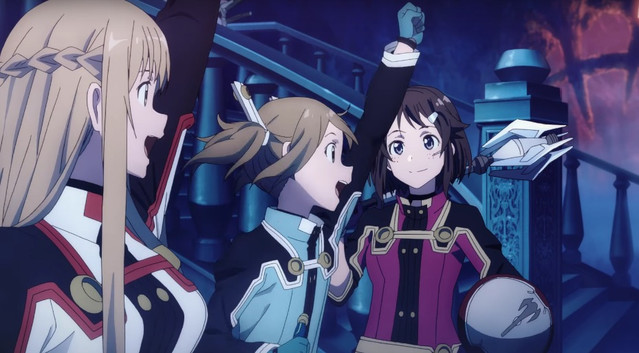 On the other hand, there are still 2+ hours of film that aren't that moment, I think it's still necessary that I note that on the whole Ordinal Scale is a surprisingly detached movie. While Ordinal Scale is certainly a more restrained, mature take on the world of SAO, at the same times it feels like it looses some of its charm in the attempt to present itself this way. The crisper, flatter character designs lend themselves less to diverse facial expressions than the more cartoony and moe designs from the TV series, and when paired with the lack of interesting character acting animation, the vividness of these characters had in the TV series finds itself drowning somewhat in the darker, grittier, colder world of augmented reality. It's without a doubt satisfying to see Kirito and Asuna looking and behaving like the young adults preparing to head off to college that they are, but I can't help but feel that the overall effect is one that makes the whole film feel rather cool in a way that lacks the passionate spirit of Kirito's over-the-top video game coolness from the TV series.

There's also a disappointing lack of immediacy in film's cinematography, which relies heavily on long shots that place the characters in large backgrounds and distance them from the camera. Director Tomohiko Ito and his friend Takahiro Shikama shared storyboarding duties for the film [1], and both have proven to be excellent at the task in past works like the Sword Art Online and ERASED, but the direction in Ordinal Scale is depressingly lifeless outside of the more dynamic action scenes, completely lacking the engaging energy of the TV series. One scene that's emblematic of this problem occurs midway through the film. Following Yuuna, Kirito finds himself on a bridge in the virtual world and talks with her. Framed with a long shot, we can only see the barest outline of each character's face, and even as Yoshitsugu Matsuoka's voice rises along with Kirito's frustration, all we see is Kirito walking in a basic cycle across the bridge towards Yuuna. The direction completely sucks the power out of the encounter—a frustrating pattern that recurs throughout the movie. 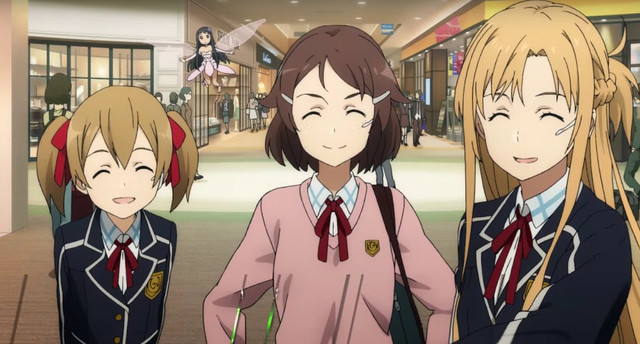 Happily, the story and script have a bit more of a spark to them, although the former is disconnected and the latter somewhat inane. It's fortunate that the key to the story of Ordinal Scale is, basically, that for the first time since Aincrad we finally have Asuna and Kirito's relationship back in the spotlight. Despite many battles that frankly don't always feel like they have actual stakes and the script's amusing failed attempts portraying friendly banter between Kirito and Asuna's group of friends (someone says something vaguely amusing, the rest of the group gently laughs), it's the promise that our two heroes made back on the 28th floor that holds it all together. If the final boss battle is the film's justification for existing, then it's Kirito and Asuna seeing the stars together at the film's end (and having their kiss interrupted by Yui lol) that validates the story.

Which, really, is just to say that Sword Art Online: Ordinal Scale is, at heart, Sword Art Online—a sometimes bumbling, sometimes ineffective, impossibly dorky, and charming invention with nothing but the best of intentions. SAO being SAO, this was never going to be a perfectly crafted movie—but it captures so many of the charms of the franchise whilst also avoiding nearly all of its most aggravating faults. It may be a few dozen minutes longer than it needs to be, undercut its own the drama by putting off the twists until near the end of the film, and lack the personality-driven dialogue that could really have made its characters come to life on the big screen, but it's still trying to be good and succeeding just often enough that I can't find it in my heart to ignore those efforts.

And, again: Yui appears, the Black Swordsman and Lighting Flash Asuna return. That was everything. And it was glorious.

[1] Thanks to Canipa from the Canipa Effect for making available his list of the full animation staff for the film. Be sure to check out his video breaking down the film's staff and the paths they took to this movie. 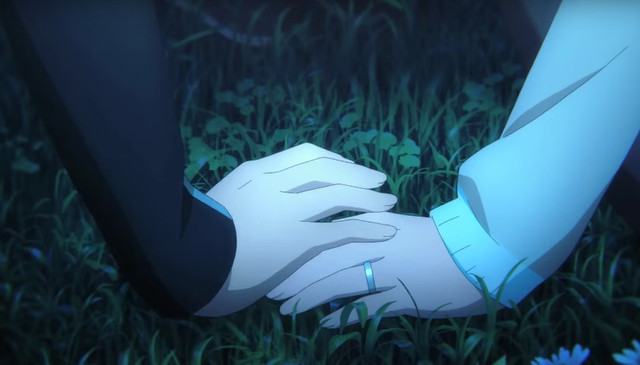