For an anime about angels and demons, The Devil is a Part-Timer! is oddly relatable. 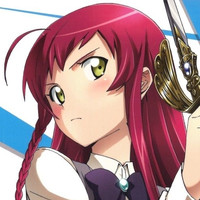 The Devil is a Part-Timer! has been a fan favorite ever since it first aired in the spring of 2013. And that’s no surprise!  There’s something inherently hilarious about watching a demon lord and his general adjust to life in modern Tokyo, where everyone—even demon lords—have to work to pay their rent. The main characters may have been ripped straight out of a fantasy show, but their struggles are still oddly relatable to any working young adult. 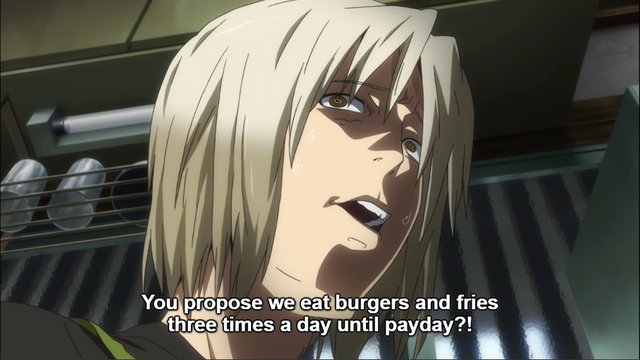 The first three episodes or so are the most memorable in the anime, full of witty jokes and charming character moments. But there’s more to The Devil is a Part-Timer! than just “fish out of water” humor. In its more serious moments, the anime uses its “normal” characters to remind the audience that, even in a world bereft of demons and magic, earth-shaking chaos lie just around the corner.

Note: Spoilers for the anime’s first arc (episodes 1-5) below.

In the anime, the first indication that something is not quite right in the world comes from earthquakes. This makes an awful lot of sense when you consider that the setting is in Tokyo. Earthquakes are extremely common in Japan, and although most of them are low-magnitude and can barely be felt, the country has experienced over twenty destructive earthquakes in the last century alone. In Japan, more than most other countries in the world, earthquakes are a familiar menace that could turn deadly at any moment.

In The Devil is a Part-Timer!, the increased presence of earthquakes doesn’t tip anyone off immediately that there’s demonic influence in the world. But it still causes some foreboding that even the fully human characters can detect. High school girl Chiho gets uneasy at all the earthquakes happening solely in her proximity, while Emi’s co-worker Rika even brings up the topic of the Great Hanshin Earthquake of 1995 in episode 4: 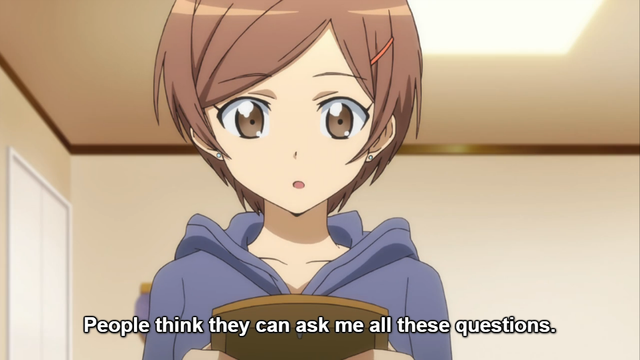 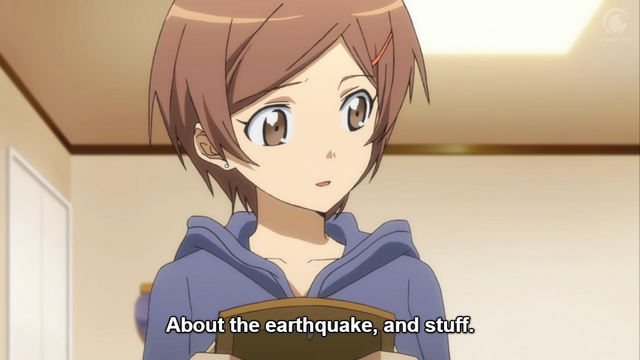 Notice how Rika skirts around what actually happened here. It’s assumed that the audience will immediately make the connection when Rika mentions “the earthquake” after revealing her Kobe dialect. Even Emi, who has not lived in Japan for very long, appears to understand the event that Rika hints at.

These days, the words “Great Earthquake” are perhaps more likely to evoke memories of the 2011 Tohoku earthquake and tsunami, which was more catastrophic in terms of the magnitude and death toll, but the Great Hanshin Earthquake of 1995 was a defining event of a generation. Thousands of people died because of the quake, most of them from the cosmopolitan port city of Kobe. It was the worst earthquake to hit Japan since the Great Kanto Earthquake of 1923, and caused ten trillion yen worth of damage.

At the time, the disaster prompted a great deal of self-reflection and introspection from high-profile writers and artists. (See, for example, Haruki Murakami’s after the quake.) The earthquake, which occurred in the same year as the Sarin gas attacks in Tokyo, was regarded as a turning point for a Japan that had grown complacent in the modern era. The year 1995 was a stark reminder that no amount of economic development could predict the unpredictable.

The full gravity of the 1995 quake may be lost on some viewers who aren’t familiar with this part of Japanese history, but the framing of this scene makes clear that what happened was a very serious and very real event. Rika’s downcast eyes are reflected in a photo depicting happier days, strongly implying that the people in the photo have passed away. It’s a bit clichéd, but it works as cinematic shorthand, giving extra weight to Rika’s spoken lines. 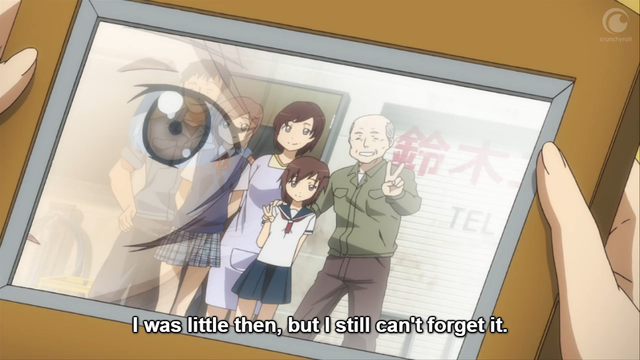 The scene itself occurs just after the story in general takes a turn for the serious. After a serious earthquake hits a Tokyo shopping mall, prompting Maou to save the day, Emi recalls her unhappy childhood in a dangerous world where the Demon King reigned free. Her conversation with Rika is what shakes her into the realization that she’s not alone in this world; even the people in Japan have experienced chaos in their own lives.

And it is here where Rika brings up the central theme of The Devil is a Part-Timer!: 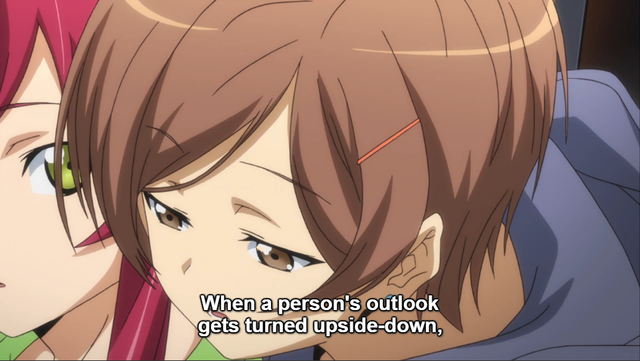 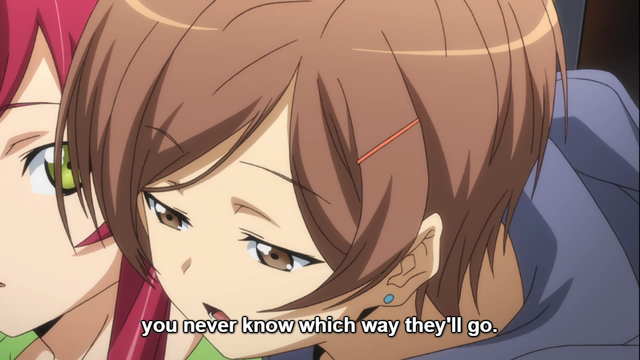 It might seem like the seriousness came out of nowhere, but the theme of “having one’s outlook turned upside” existed right from the very first episode, when Maou ends up in a world he knows nothing about and is forced to adapt to his alien surroundings. His actions are unpredictable—he’s supposed to be a demon lord but he ends up aspiring to be the greatest part-timer in Japan. This is initially played for laughs, but the idea that people’s hearts can change in a moment of chaos plays a big role in Maou’s redemption.

The earthquake analogy also invites the viewer to think about how people show their true selves in the aftermath of a real-life disaster. It doesn’t have to be the Kobe quake in particular—you can think of it in terms of a disaster closer to your own home. But what they reveal about human nature remains the same wherever it happens. As Rika puts it: “Some people take advantage of the chaos to do bad things. And other people are so soft-hearted, they’ll do anything to help you, even after they’ve lost everything.” 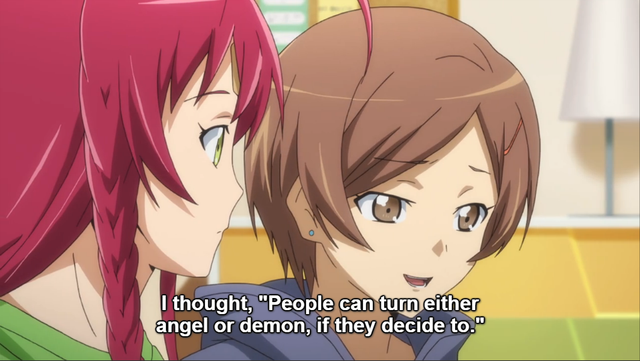 Even in our world, angels and demons exist.

One of the greatest appeals of the urban fantasy genre is that it “turns a person’s outlook upside-down.” The audience is pulled into a world identical to our own, but where magic and fantasy exists in hidden alleyways. It’s the kind of genre that makes you want to explore all the hidden alleyways you know of, to find the magic that could exist in your daily life. The familiar becomes unfamiliar, and vice versa.

Whether it’s an earthquake in Japan or the tumult of starting a new job in an unfamiliar city, anyone who has lived through chaos can understand the themes in The Devil is a Part-Timer!. That’s probably why the anime is so relatable, even in translation. The series makes it easy to imagine that there are angels and demons living right along with us. We’ve just never noticed them because they’ve been with us all along.