FEATURE: Anime vs. Real Life – “The Devil is a Part-Timer!”

Check out the real-world locations of The Devil is a Part-Timer! 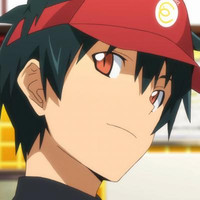 Crunchyroll has recently been adding shows left and right to its ever-growing anime catalog, one of them being one of my favorite anime of the past few years – The Devil is a Part-Timer! So now that it’s on Crunchyroll, why not take a quick look at some of the show’s real-world locations?

Just inches away from conquering the whole world of Ente Isla, the Devil’s advance gets foiled by the legendary hero Emilia Justina, forcing him to retreat through a magical portal to an unknown destination. And where else in the universe would the defeated demon lord end up in, than in the bustling metropolis of Tokyo? However, being stranded in the middle of Shinjuku without any money and only a little bit of magical power left, he soon finds himself working part-time in a fast-food restaurant to make ends meet.

If you were wondering, the portal to Ente Island is apparently located between a normal office building and a Go Go Curry restaurant in the west of the Shinjuku Ward.

But without any money or knowledge of Japanese –while at the same time wearing ominous looking robes– Maou and Ashiya soon start to draw attention, and subsequently get taken into custody by the police, making their first stop in this world the Shinjuku Police Station.

Luckily, Maou still has a bit of magic left to hypnotize the police officers, so they manage to escape and wander around Shinjuku’s entertainment district, passing by the Tokyu Milano Cinema here.

Maou soon realizes that the only way to survive and get back to Ente Isla, is to obey and play by human rules for the time being. He reaches that conclusion next to Shinjuku’s iconic Love sculpture, located right next to the unique traffic light circle, which already appeared in numerous anime, but probably most notably in the fantastic your name.

So in order to to scrape by, he takes a part-time job at a local MgRonald. Most of the show’s brand name knock-offs are pretty great, and the show has a lot of them, like Moonbucks or Sentucky Fried Chicken. And now on to the question you’re probably wondering about the most: does the McDonald's where he works at also exist in real life? Well, not really. While the building where the McDonald's is supposed to be located does exist (it’s the brown building to the left), there is actually no fast-food restaurant in there anymore, but the place was housing a branch of the Japanese Mos Burger fast-food chain up until late 2014. The street is located just outside of Hatagaya Station, in the Shibuya Ward.

Maou and the hero Emilia Justina (or just Emi) have their first encounter in our world at this intersection near Sasazuka Station.

While Maou and Ashiya live in the Sasazuka area, Emi lives in the neighborhood of Eifukucho Station.

Right after our protagonists start to recover from the earthquake that hit the city, one of Maou’s former demon generals, Lucifer, appears and starts to wreak havoc in the area again.

He should probably get that checked.

The big showdown against Lucifer goes down near Sasazuka Station, and in the end there wasn’t much left of Shuto Expressway’s Route 4 in the anime.

FamilyMart gets turned into FriendlyMart in the anime. While these fake brand names are hilarious, it’s interesting that the anime actually kept all of the correct train station names, which also often get changed in anime to avoid legal issues.

Hello Parking does sound a bit like Arrow Parking.

In the tenth episode, the girls head to the Toshimaen Amusment Park in the Nerima Ward, which includes a large water park that we also get to see in the anime.

The show concludes at the same intersection near Sasazuka Station, where Emi and Maou first met in this world. However, this time they're on the other side of the road, and the hero is handing the devil an umbrella.

All in all, The Devil is a Part-Timer! is just a genuinely funny fish-out-of-water fantasy comedy. Seeing the devil himself trying to make it in our world by flipping burgers managed to put a smile on my face throughout the whole series.

Have you already watched The Devil is a Part-Timer!, or are you planning to? Sound off in the comments below!