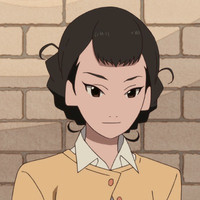 This may be a controversial statement, but among all the blockbuster anime sequels coming out the summer season, none have delivered so completely as The Eccentric Family 2. Last week showcased the show at its most active pace, gathering major players together in a single room for an immensely tense scene and brilliantly delivered poignant conclusion which rivaled the climax of the first season. This week it effortly switched gears to showcase the story at its most nuanced, recontextualizing the actions of half the cast leading up until this point in a single scene by calling back to narrative seeds planted in the very beginning of the first season while setting the stage for a reveal that will define the next leg of the story. 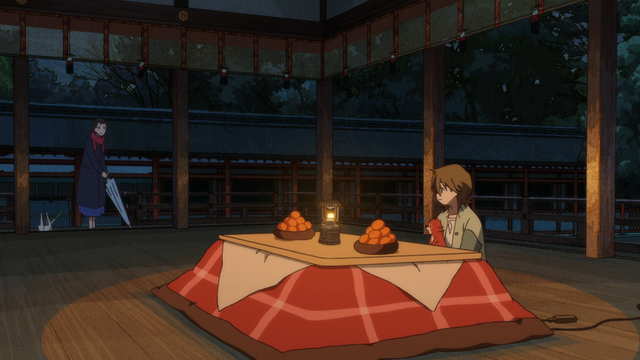 In perhaps the coziest scene in the history of anime, while the Shimogamo clan enjoy a happy moment together under a kotatsu in the shade of a pagoda during a gentle storm, the family conversation provides exposition for a concept with which we were already acquainted but didn’t a have name, the tanuki weakness. It's already been established that shapeshifting is tied to a tanuki’s state of mind. Fear or surprise can cause them to lose control of their form and locking them in a cage robs them of their sense of freedom and, therefore, their powers. Just like humans, tanuki also possess irrational fears and complex feelings which disrupt their state of mind and cause them to lose control of their forms. 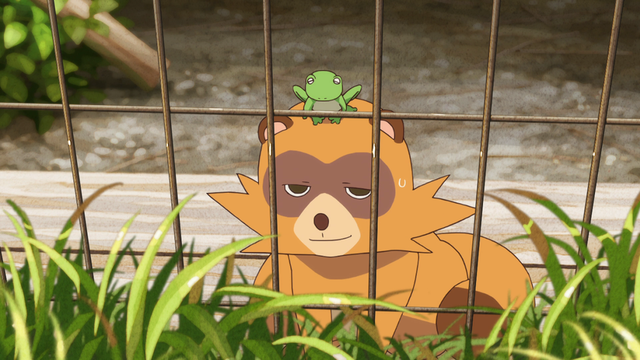 Tousen’s weakness has been the most defined since the very beginning. An early episode features the Shimogamo brothers desperately searching for her during a storm as we discover her fear of thunder makes her unable to maintain her shape. Gyokuran describes a similar situation regarding her weakness, the sound of a tofu merchant’s drum causing her to feel ill at ease. Weaknesses aren’t always simple phobias, however. Yajiro’s inability the change out of the shape of a frog arose from his feeling of responsibility for his father’s death and, although he is beginning to overcome this block, he discovers he still can’t maintain his form in front of Tousen. Yajiro can no longer face his own mother and decides to leave Kyoto until he can overcome his feelings of guilt. 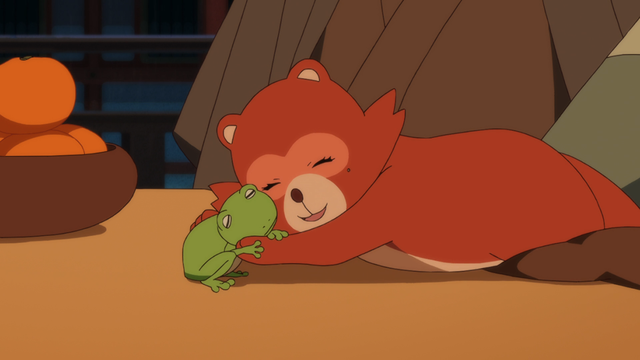 Soichiro’s weakness was also introduced before the concept was provided exposition. Upon first meeting Benten he lost his shape and avoided her thereafter in an attempt to hide his weakness. Ultimately it led to his death, with Soun exploiting Soichiro confiding in him and granting Benten her membership to the Friday Fellows by providing them with the most necessary ingredient for their infamous tanuki hot pot. Although something about Benten may have given Soichiro a premonition of his own death, leading to a self-fulfilling prophecy as his weakness facilitated his capture, we’re left with unanswerable questions as to whether their relationship may have been more complicated than that. Although the Shimogamos discuss their weaknesses freely among one another, through Soichiro's history we can see that they are closely guarded secrets. 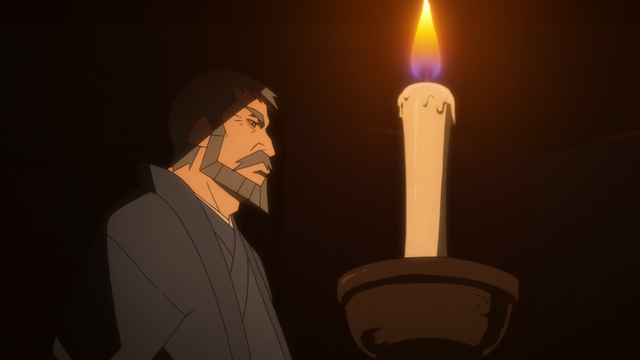 Yasaburo boasted that he had no weakness so, predictably, the episode concludes by revealing that he had been protected from his weakness all along. Kaisei had hidden herself from Yasaburo for years keep secret that the sight of her makes him lose control of his form. As a tanuki who exalts in his free-spirited lifestyle, the idea of being tied down by marriage represents an existential threat. Although he’s the least likely among the cast to honor an arranged marriage forced upon him by his family, seeing Kaisei in person my force Yasaburo to confront the uncomfortable truth that he actually does have feelings for her. It’s harder to imagine a more appropriate weakness for Kyoto’s king of foolishness than his own feelings of affection for his fiance. Meanwhile we come to understand that Kaisei's inscrutable eccentricities we born of compassion for Yasaburo, adding to her litany of tragic circumstances as she has dedicatetly protected his secret from her own family members. 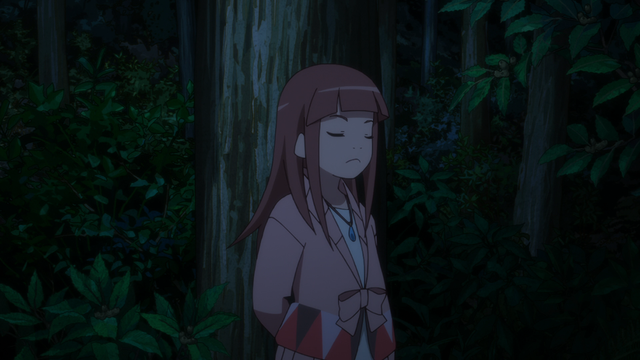 For the first time, the narrative eye of the story turns toward its protagonist Yasaburo. Dedicated to his pursuit of living an interesting life, Yasaburo has acted as our perspective character as he pries into the troubles of the other characters. As the inheritor of his father’s foolishness, he has proven to be an unreliable narrator as the world's events are filtered through his eyes and we have been left to puzzle right along with him at things he doesn’t understand and even his own uncertain feelings toward other characters. Now, rather than meddling in the affairs of others, he’s forced to confront a very personal problem which may threaten not only the newfound peace between his family and the Ebisugawa clan, but also the relationship which as defined the series. 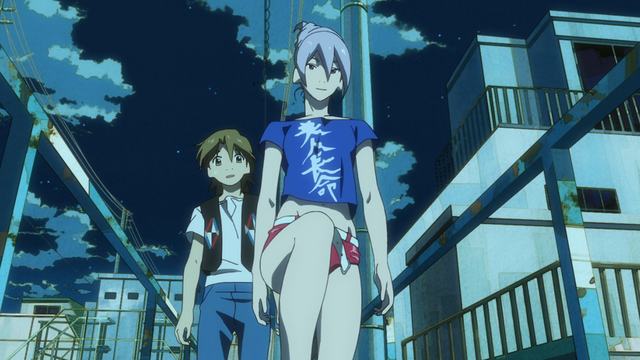 Yasaburo’s contradictory crush on Benten, and Benten’s charmed response to Yasaburo, has provided the thrill-seeking tanuki with opportunities to find his way into interesting and dangerous situations. Now a member of the Friday Fellows and party to the increasingly heated rivalry between Benten and Nidaime, Yasaburo’s position seems increasingly tenuous even as his newfound perspective may threaten his relationship with his frequent savior. Benten often laments that Yasaburo will eventually end up in her hot pot and learning her favorite suitor may have eyes for another or, even worse, consider her the more conservative romantic options, may not sit kindly with her. 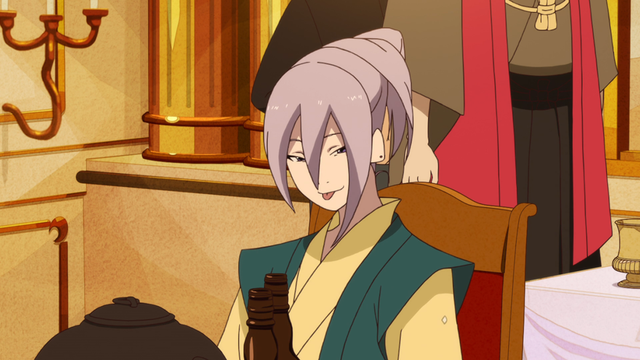 As always seems to be the case with this wonderful story, it's impossible to predict where things may go next but each potential direction presents fascinating possibilities. One of the major strength of The Eccentric Family has been the sense of intention behind each and every interaction in the series. Twenty episodes of fanciful character quirks were instantly invested with immense emotional context with a simple exchange. Despite this sense of orchestration the world and its residents all possess a charm that allows them to shine as individuals rather than pieces in a complex narrative puzzle. Although we’re still a way off from the end of the season, The Eccentric Family 2 is making a strong argument for anime of the year even against some of the most anticipated titles in the last decade.