The Most Godly Steamed Potato EVER from "Restaurant to Another World" 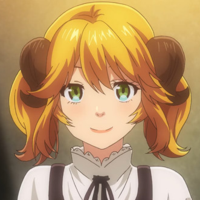 Restaurant to Another World  has finally hit my BS wall with steamed potatos. I mean, for the love of goodness sake, STEAMED POTATOS??? How can this be a serious recipe they are actually trying to show us?! And on top of that, Aletta claims it's her favorite food out of everything at the shop. I mean, come on. A steamed potato??

Aletta confesses she doesn't like potatos, or 'cobbler's tubers', so Master makes her a steamed potato to try and show her something simple and delicious to make. This is where the first red flag went off. I don't know about you guys, but sticking a potato into an oven, or in the coals of a fire, even, is easier than steaming stuff. Steaming things means you need to set a timer, and test the doneness of the food. That in and of itself isn't unusal, but then you have to consider the equiptment. Steaming stuff takes special equiptment in the kitchen. You have to get a steamer, or rig up a steaming device. Roasting something, or cooking it in a pan, does not require this extra prep, as long as you have the basics- a pan to roast on, or some foil/ leaves to roast your potato in. So, why would he teach her how to steam a potato as a more convenient and easy way of preparing this kind of food?

The second red flag went off when Aletta lost it over the potato. She was awestruck by how fluffy and buttery and delicious the potato was. I mean, yeah- potatos are good. But are they really that good? Better than everything else the restaurant has to offer? Somehow, I really don't think so. This girl must have simple tastes. In case she was wrong, I tried it out, just to see if somehow steamed potatos were the missing link in my otherwise mundane life.

Spoiler alert: They aren't. I'll admit that steaming the potato gives it a more fragrant touch, and has a nice potatoey flavor, but honestly, it took me so long to cook the thing all the way through, and make sure the water didn't run out, and make sure my basket wasn't catching on fire (I am something of a pyro in the kitchen- not on purpose), that I'm not sure it was truly worth the subtle extra hint of fragrance the basket imparted on the potato. On the bright side, it was fun to try using a steamer basket, and Idid get a decently cooked potato out of it. I'd make this if your oven was broken, and you were poor, and didn't want just a plain old boiled potato or mashed potatos.

In conclusion: It's good, for a potato. But not THAT amazing. If you want to try steaming something in a cool bamboo basket, then it's worth it, though.

Watch the video below for more details on how to start your steamed potato!

Ingredients for the Steamed Potato:

To Make the Steamed Potato:

1. Wash and dry the potato.

3. Place water over medium high heat and bring water to a steam. Place steamer basket on top, and place potato inside.

4. Allow to steam about 40 minutes to an hour, or until a skewer put into the potato meets no resistance from the potato.

I hope you enjoyed this post! Check in next week for another recipe. To check out more anime food recipes, visit my blog. If you have any questions or comments, leave them below! I recently got a Twitter, so you can follow me at @yumpenguinsnack if you would like, and DEFINITELY feel free to send me food requests! My Tumblr is yumpenguinsnacks.tumblr.com. Find me on Youtube for more video tutorials! Enjoy the food, and if you decide to recreate this dish, show me pics! :D
In case you missed it, check out our last dish: Tonjiru from "Clean Freak! Aoyama kun". What other famous anime dishes would you like to see Emily make on COOKING WITH ANIME?
Tags
cooking with anime, restaurant to another world, steamed potato
« Previous Post
JAM Project's Hiroshi Kitadani Takes Break Due to Hearing Issue
Next Post »
"[email protected] Side M" Announces September Preview Episodes
Other Top News
15 Comments
Sort by: