The New Champions of Atmosphere in the Crunchyroll Catalog

Today we'll be exploring some of the more atmospheric highlights of Crunchyroll's latest acquisitions! 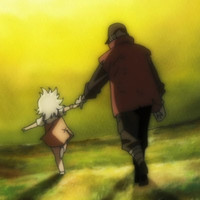 Hey everybody, and welcome to Why It Works. A few weeks back, I highlighted Shiki, a recent addition to the Crunchyroll catalog that’s also one of my favorite shows. Thoughtful, atmospheric, and full of horrors, Shiki is a singular show - but since then, I’ve realized Crunchyroll has actually picked up a fair number of other classics recently, shows that create unique tones just as strong as Shiki’s. While horror stories depend heavily upon creating a very specific atmosphere, there are plenty of other narratives that benefit from establishing just the right tone for their worlds. So today, I’m going to highlight three separate new additions to the catalog, all of which are champions of atmosphere in their own right. 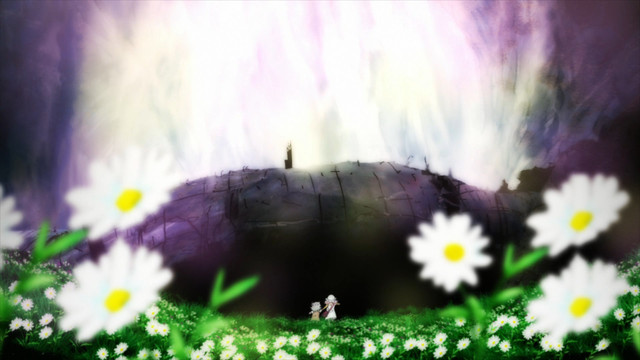 First off, Casshern Sins might be the most relentlessly and successfully mood-focused show I’ve seen in anime. Set in a dying world where our “hero” Casshern has killed the bringer of life, its episodes proceed as slow elegies, small fables set in a place that time has passed by. Director Shigeyasu Yamauchi (who also did standout work on the also-excellent Penguindrum and Shinsekai Yori) has a vision unlike any other creator in anime, and Casshern Sins is a pure distillation of his beautiful, apocalyptic soul.

A brief scattering of Casshern Sins’ backgrounds demonstrates the remarkable diversity of design the show brings to its overall “crumbling wasteland” setting. Melancholy music and somber closeups bring the feelings of its characters home, while the show’s initial episodic structure creates a sense of inevitability as new friends appear and swiftly fade away. Casshern Sins is a sad show, but there is great beauty in its world, and it slowly builds up a cast who are easy to fall in love with. Casshern Sins’ “grace in the end times” tone is a wondrous thing, offering an apocalypse that is as beautiful as it is terrible. 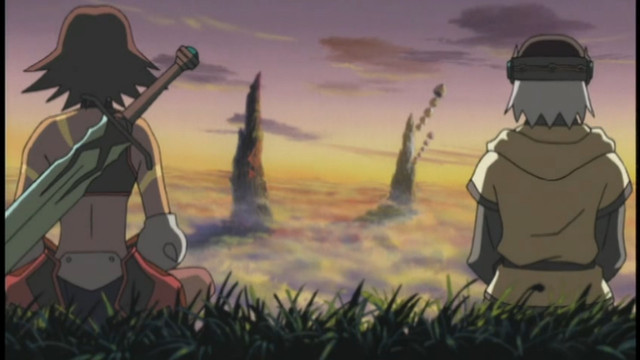 Moving on, the less recent .hack//SIGN offers another vivid world to explore. Ostensibly set in an MMO world, .hack’s various zones feel rich and lived-in, ranging from cozy sky-islands surrounded by rope bridges to sprawling temples and warmly lit canal cities. The show’s slow-building storytelling does great justice to these settings, a tale of digital entrapment and identity unspooling slowly, allowing the everyday pace of life in a digital world to come through clearly.

Most of all, .hack//SIGN is elevated by perhaps my favorite soundtrack in anime, an incredibly rich and diverse collection of songs composed by talented artist Yuki Kajiura. Kajiura would later compose the bombastic soundtracks of such shows as Madoka Magica, Fate/Zero, and Sword Art Online, but I personally believe .hack//SIGN represents the apex of her work. Matching gorgeous music with beautiful worlds and an intriguing narrative, .hack//SIGN is a show that’s easy to get lost in. 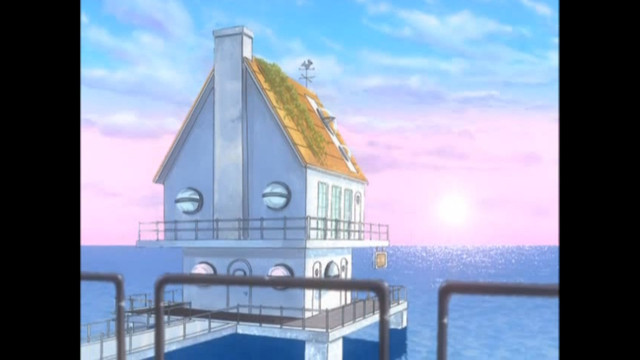 Last up, Crunchyroll most recently acquired the slice of life classic Aria: The Animation. Slice of life shows rely on atmosphere even more than most genres, and Aria’s world is one of the most vivid and rewarding in the field. The show’s martian setting of Neo-Venezia offers a striking vision of a futuristic yet still-storied Venice, a sprawling tapestry of towers and canals that feels soothing simply to visit. Its gentle storytelling frames the viewer alongside an apprentice gondolier, letting the audience come to appreciate the wonders of this world alongside the lead characters. The idyllic, vaguely renaissance-European aesthetic of shows like Sound of the Sky, Haibane Renmei, and Kino’s Journey is one of my favorite meta-settings in anime, and Aria: The Animation fits comfortably into that inviting visual tradition.

I personally love getting lost in a show’s world, and feel certain settings are as rewarding and full of personality as any actual character. Though they are very different shows, Casshern Sins, .hack//SIGN, and Aria: The Animation all expertly illustrate the power of setting and atmosphere, creating striking worlds that feel like they exist just a few inches through the screen. I hope you enjoy at least one of these standout shows, and please let me know which of your own favorite shows create a world worth falling into.