Check out Hanasaku Iroha’s real-world locations and learn about the festival’s unique history! 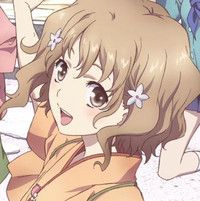 Every tenth month of the year in Yuwaku, a procession moves along a path lit up by dozens of bonbori lanterns, guiding the young goddess, who once tamed a fox and therefore keeps getting lost, from the Yuwaku Inari Shrine to the serene Gyokusenko Pond. From there, she sets off on her journey to Izumo, the place where all Japanese deities gather once a year. In return for everybody who held their bonbori up to illuminate a path for her, the young goddess takes everyone’s wishes with her to the sky.

What sounds like a time-honored and long-established tradition is in fact not much older than a mere seven years. And aside from a few inspirations from other Japanese festivals, the Yuwaku Bonbori Festival has no historical roots at all – it was completely made up for the P.A. Works original anime Hanasaku Iroha. This entirely fictional event inspired the town of Yuwaku, which served as the setting for the anime, to recreate the festival in reality. And now, it has been celebrated for the seventh year in a row.

“If a lot of people get together and fest it up, it’s only natural that many things happen,” says Ohana in the final episode of Hanasaku Iroha, which perfectly describes how the Yuwaku Bonbori Festival came to be. Yuwaku Onsen is a quiet and picturesque hot spring town in the mountainous southeast of Kanazawa Prefecture, but in 2009 the region was hit by heavy rains that triggered devastating floods and landslides. Over 2000 buildings were damaged in the disaster, and over 25,000 people were forced to evacuate. After a few years of successful recovery, town representatives and officials from P.A. Works, a studio that’s deeply rooted in the region, came together to think of ways to aid and boost the local economy – paving the way for the Yuwaku Bonbori Festival we know and celebrate today.

Not even a full month after Hanasaku Iroha’s final episode aired, Yuwaku hosted the first Bonbori Festival by recreating all festivities from the anime. The festival was instantly a huge success. This was, of course, not a given, and so the festival was designed so that a skeleton crew of no more than a dozen people could manage the event if it didn’t prove successful. But an impressive 5000 people turned up for the festival’s premiere, truly a boon for a small, remote disaster-struck town with no more than nine traditional inns. The made-up event has only grown since, counting more than 15,000 attendees in its seventh iteration this year, and things are looking bright for the future. It is safe to say that the fictional anime festival from Hanasaku Iroha has become an important and beloved real life tradition in Yuwaku, and thanks to P.A. Works' PARUS and JETRO I had the opportunity to fest it up and check out the festival for myself.

As mentioned earlier, the anime’s fictional town of Yunosagi is based on the real Yuwaku Onsen, a small village hidden in the mountains of Kanazawa Prefecture. The made-up name Yunosagi is actually a word play on the real town’s hot spring source, called “Shirasagi no yu,” literally meaning "hot spring of the white heron." In addition, one of Yuwaku’s public bathhouses is called “Shirasagi no yu,” which, when partially spelled backwards, results in the anime’s Yunosagi. In the anime, Ohana encounters a white heron several times – surely also a nod to Sarah Orne Jewett‘s short story “A White Heron,” in which a young city girl has to move back to her grandmother's home in the countryside, just like in Hanasaku Iroha.

As you can surely imagine, prior to the anime, Yuwaku Onsen was more of an insider tip, and certainly not a prime destination for anime fans. But the anime's broadcast hadn't even ended when the town began seeing an increase in anime tourists. While Yuwaku itself is fairly hard to reach (only by bus from Kanazawa), the town actually makes for a highly satisfying anime pilgrimage, as all the major spots from the show are easily accessible and not located too far away from each other.

We got dropped off close to the intersection here, which was already etched in my mind since I'd seen Ohana and Minko run past this spot so many times in the show’s first opening. Although the main event was still a few hours away, the place was already crowded with people, many of whom were taking photos of their favorite anime locations.

I was also delighted to find Yuina’s inn only a few steps further ahead. While the inn is called Fukuya in the anime, the real one is called Syuhokaku. Aside from a few minor differences, especially the hotel lobby, which was a lot more spacious in the show, the inn looked just like in the anime.

Set up behind Yuina’s inn was a small event area with a bunch of food stalls and a few shops selling Hanasaku Iroha branded goods. There were also a good number of cosplayers dressing up as their favorite characters from the show, often recreating poses and scenes from the anime.

From there we headed back over Fukujin Bridge, another location from the anime, to Yuwaku’s center.

You may ask yourself by now, but what about Ohana’s inn, the Kissuiso? Well, if you’d follow the road on the right up the hill here, you’d end up where the inn was located in the anime. However, you won’t actually find a hotel there, at least not anymore. There used to be a western hotel called Hakuunro up there, which didn’t even closely resemble the anime’s Kissuiso. Unfortunately, it went bankrupt in 1999 and was later torn down in 2006. The area now serves as a public park, so you can at least still check out the would-be location of the anime’s Kissuiso.

Another spot from Hanasaku Iroha’s opening. This narrow main street makes up the center of Yuwaku, and leads straight to the Kanazawa Yuwaku Yumeji Museum, dedicated to the famous poet and painter, Yumeji Takehisa, who was a frequent visitor.

But more importantly, the street leads right to this flight of stairs, which is – you guessed it – another anime location. These stairs were also a main venue of the festival, as there were several live acts, performances, and speeches. Especially noteworthy here is the fact that there were actually none of the voice actors or the bands responsible for the show’s opening and ending songs present at the festival, as was the case in previous years. Performing instead were local groups and bands, like a small acapella group humming Hanasaku Iroha’s opening theme. It’s all the more impressive, then, that the festival has managed to keep growing at this pace.

An explanation for this change is that P.A. Works is now only taking a backseat when it comes to organizing the festival, as explained by the studio’s executive producer, Nobuhiro Kikuchi, who was one of the driving forces behind the first festival. The organizers have gradually shifted the spotlight away from the festival’s anime origins in order to widen its appeal to non-anime fans – a strategy that seems to be working. Of course, there will always be a strong connection to the anime, and the event will remain a popular destination for anime fans in the coming years, but the festival’s now also highly enjoyable even if you’re not an avid anime fan.

The stairs lead up to the humble Yuwaku Inari Shrine, marked by three vermilion torii gates and two kitsune (fox) statues. In the anime, Nako regularly comes here to pray to the young goddess who tamed a fox.

I still had a bit of time left before the main festivities were to begin, so I decided to grab a bite to eat. I obviously had to go for some yakisoba, which was also what Ohana and Koichi got before their big confession scene. I unfortunately wasn’t brave enough to ask the chef for a heart-shaped one, so this will have to suffice.

Right before the procession started to head to the shrine we were allowed to write down our own wishes on these wishing plaques, which would later be burned in the bonfire, just like in the anime.

After a quick pit stop at the shrine, the young goddess was guided to the nearby man-made Gyokusenko Pond. The stairs, flanked by countless illuminated lanterns, truly were a sight to behold.

The same goes for the exclusive pond area, which was fully surrounded by the hand-painted lanterns.

The procession fully circled the pond before stopping at the small platform with the bonfire.

Then was time for the Yuwaku Bonbori Festival’s grand finale. An actual priest recited a prayer before everybody’s wishing plaques got burned in the bonfire, delivering our wishes and prayers for a second season of Hanasaku Iroha to the sky and the gods above, all as the tranquil soundtrack from the same scene in the anime started playing.

The Yuwakau Bonbori Festival is without a doubt one of the biggest success stories when it comes to anime-induced tourism and efforts to strengthen Japan’s more rural areas through anime. However, it's only one of many community projects by P.A. Works, a studio that has always been considered a central player and on the forefront of the rapidly growing anime tourism trend in Japan. In 2015, P.A. Works even went as far as to set up their own Produce Area Research & Utility Support Center (PARUS) to study and support the development of the region and coordinate with local governments. Another one of their projects was kicked off just a day after the Bonbori Festival, which was a sister city signing between the city of Nanto, where the studio is located, and the fictional town of Manoyama from the recent anime, Sakura Quest. The treaty included a handful of tie-in events that were part of Sakura Quest’s plotline, creating even more incentives for fans to visit these anime locations.

Anime tourism is definitely a growing trend in Japan, and with committed studios like P.A. Works bringing terrific projects like the Yuwaku Bonbori Festival to life and consequently putting Japan’s often overlooked rural regions on the map for tourists, I’m sure it’s a trend that’s here to stay.

What were your thoughts about Hanasaku Iroha? And would you like to see the real life Bonbori Festival yourself someday? Sound off in the comments below!