It's time to celebrate the greatest anime pastries in history! 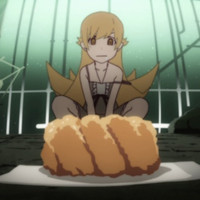 What is a donut, anyways? Well, it's a delicious circle of greasy goodness. Cake or pastry, glazed or jelly-filled, with coffee or tea, Dunkin' or Krispy Kreme, any flavor under the sun – the varieties are endless. You might even say there’s a donut out there for everyone; that’s why we love them so much. But donuts don’t have to be 3D! Donut love transcends dimensions to include the anime variety as well. And when it comes to anime, sometimes donuts are so powerfully addictive that they actually become plot-relevant – truly the mark of a good anime. In my very unbiased opinion, no anime is complete without at least one (1) scene of sincere donut appreciation. Here are some of my personal faves. 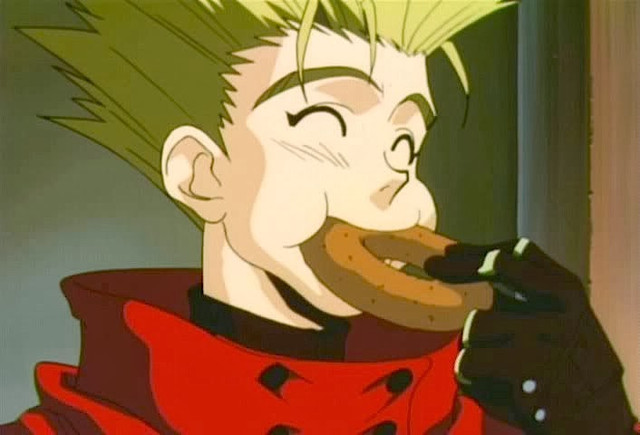 For a time, Vash the Stampede was one of the most iconic cosplays on the U.S. convention scene. The essential components: long red coat, glasses, spiked wig, and most important of all, his box of donuts. Fans loved Vash for not only his endless compassion, but also his goofy personality, so in their eyes, an early running gag about his love for donuts eventually became essential to his character. Trigun might not be as enduringly popular as some other anime from its era, but Vash the Stampede remains best boy in the world of donut appreciation. Maybe someday he’ll get to enjoy them in peace. 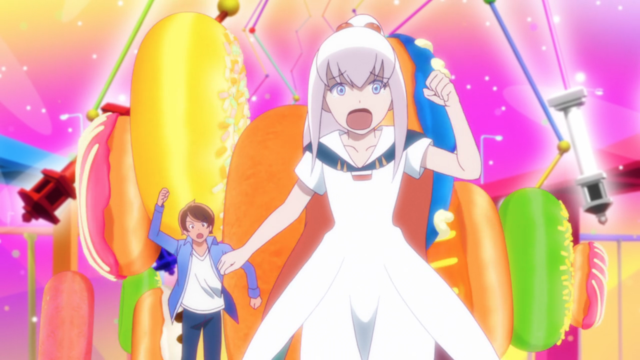 The fourth episode of 18if stars a girl who loooves food. Fed up with the real-life pressure to be thin, she retreats to a candyland-like dream world where she takes the form of a little pixie who can eat as much as she likes without gaining weight. Trespassers in her personal haven get punished with donut-themed attacks: rolling donuts, like a version of Indiana Jones where the boulders are holey and delicious; donut cannibalism of the disgusting health food variety; even a donut wheel of death, complete with chocolate-covered handcuffs. It’s a little scary to imagine a world where donuts’ power to kill extends to more than heart disease or whatever, but maybe it’s not so bad to die by drowning in glaze and sprinkles. Either way, donuts aren’t exactly good for you. Does that matter? No, not really. 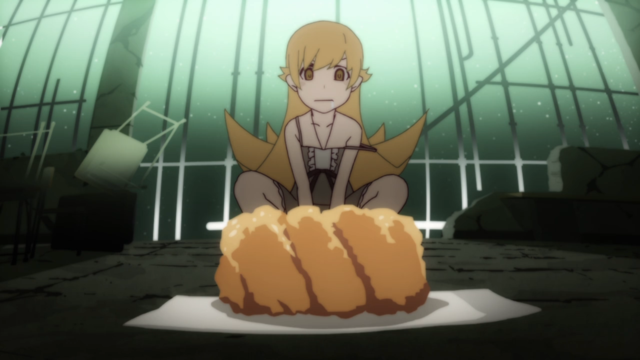 In the Monogatari series, vampire Shinobu Oshino spends most of her early appearances quietly huddled up in a corner, having been weakened in an encounter with Koyomi Araragi and Meme Oshino. The thing that gets her to talk? The limited edition golden chocolate donut from her favorite bakery chain, Mr. Donut. A season of near-silence broken in Nekomonogatari: Black only by the sweet, sweet temptation of baked goods and a reverence for lovingly crafted pastries that might even surpass her thirst for blood. Shinobu might be centuries old, battle-hardened, and queen of the supernatural, but deep down she loves reasonably-priced donuts just like the rest of us. That's pretty relatable. 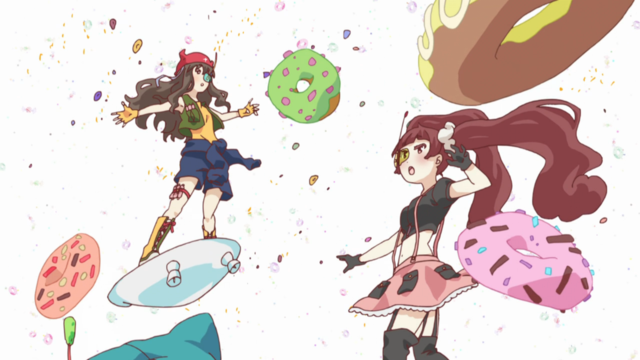 URAHARA is more or less what you’d get if Hello Kitty barfed cotton candy all over those Lisa Frank trapper keepers you had in grade school. Its aesthetic is all pastel colors and frilly outfits, the squiggly little doodles that live in the margins of a teenage girl’s class notes. Throw in original character designer Mugi Tanaka’s distinct quirks (cat ears and thick eyelashes), and you have what might be the most sugary-sweet anime of 2017. So sweet, in fact, that the alien invaders all just happen to be giant desserts in monster form. The first episode ends with the Scoopers exploding into a literal shower of donuts of all different shapes and sizes and colors. It’s kind of messed up that our three protagonists eat their enemies after defeating them, but in a show this carefree, maybe that doesn’t really matter. After a hard day’s work of developing a new fashion line and protecting the earth, why not reward yourself with the fluffy spoils of battle? 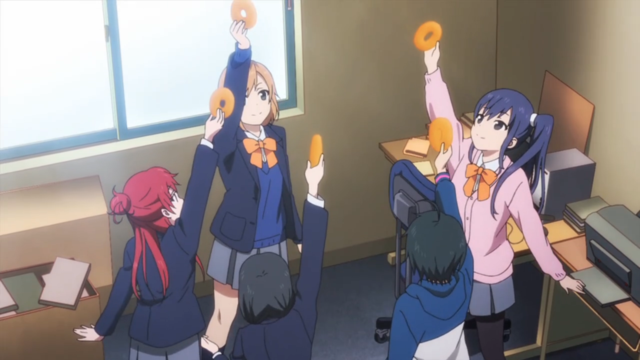 Shirobako may not be entirely accurate to real life in its depiction of the anime industry (though it gets fairly close), but there is one thing it gets 100% right: the power of donuts to change lives. In their final year of high school, five girls make a pact over a box of donuts to someday create an anime together. Years later, they’ve all entered the industry (except for Shizuka, because the life of an aspiring voice actress is suffering) and are working on different projects. But despite going their separate ways, they’re always willing to make time to bond over their mutual love of both donuts and anime. That box of donuts is a cute summation of their group dynamic: no donut is precisely the same, but they all come from the same place. Likewise, Aoi, Midori, Misa, Ema, and Shizuka pursue different career paths post-high school while still sharing a common goal. In a way, that box of donuts is what incites the whole show in the first place. "Don-don donuts, let’s go nuts!" indeed. 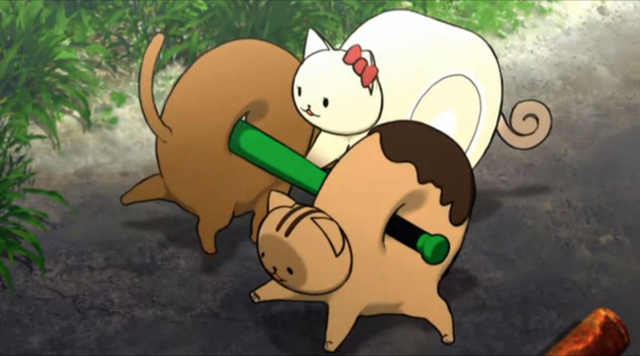 What’s better than donuts? Donut cats, of course! Donyatsu is the gripping tale of a cat who is also a donut. In post-apocalyptic Tokyo, Donyatsu and his pastry-animal pals live a life on the run from hungry mice. Despite living in an urban wasteland, though, he’s not terribly worried – who has time to think about rodent fascism when you could be playing word games with a giant alien robot? Certainly not Donyatsu or his best friend Bagel, who happens to have a killer Arnold Schwarzenegger impression. When all’s said and done, it’s not worth stressing over the end of the world when you’ve got friends to goof off with. Besides, when your delicious chocolate body regenerates spontaneously, it’s hard to be too concerned about mortality. Maybe we all need to take a page from Donyatsu’s book and learn to live in the now. 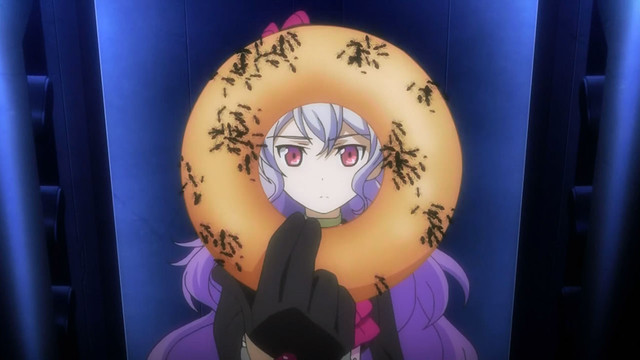 Donuts aren’t simply a dessert. They’re a lifestyle. No anime communicates this better than Aquarion EVOL, which creates an entire philosophy around donut holes and their significance in the universe. What is a donut, asks the commander? It is a ring surrounding a hole. But a hole is not emptiness; no, the donut gives that space meaning. Look through its hole, and a donut seems to disappear. Yet the donut never truly vanishes; once consumed, it becomes one with the donut-lover and eventually the earth itself. Clearly, this must be evidence of profound cosmic powers at work. Ergo, a donut holds the secret to all existence. Which gets us to the point of Aquarion (SPOILERS) LOVE BACKWARDS. When all’s said and done, love is the donut that gives meaning to the holes in our hearts. It’s a truly inspiring message from a silly anime about libido-powered robots. 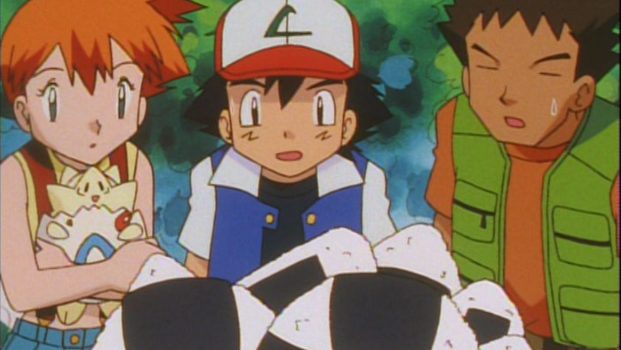 Let’s get one thing out of the way. The “jelly donuts” in 4kids’ dub of Pokémon were never jelly donuts, at least by the usual definitions. You can’t just call one by the other, you might say – an onigiri is an onirigi and a jelly donut is a jelly donut. But I raise you this: what is donuthood but an arbitrary category established by the same people who want you to believe Pop-Tarts are not breakfast calzones? Onigiri can be donuts or not donuts. What matters is what you believe they are. Personally, I think our current definition of what constitutes a donut is rather too narrow. Think of the possibilities! Why limit yourself to cake or pastry donuts when you can substitute any number of unusual ingredients to create something fabulously different? That’s why I believe Pokémon’s onigiri belong on a list of the best anime donuts. They’re iconic, and I refuse to have them taken away from me.

Now it's your turn! What's your favorite anime donut?