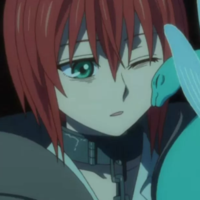 When Chise arrives in Elias' home, she is offered an abundance of food. As a food blogger that focuses on anime food, this was very intriguing to me. However, the only thing she really ate was THIS: 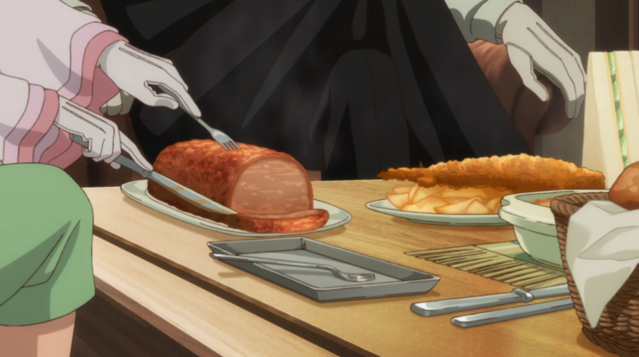 I was immediately befuddled. Was this meatloaf? Something else? On first sight, I thought it was meatloaf. I decided to see what everyone on Twitter thought, and the resounding conclusion from almost everyone was this:

I was really thrown for a loop. If you watch this episode, the way this dish is served and consumed does not seem to coincide with a roast. It's an unusual shape, slices far too easily, and Chise later eats it without even a knife to cut pieces. It really seemed like a meatloaf to me, but so many people thought it was a roast!

Let's just pause here to say that I spent a good week debating whether a food from an anime (that isn't even remarked upon by the characters) was a MEATLOAF or some kind of ROAST. In the end, I think we can all agree that the food itself is drawn in a pretty nondescript way- it really doesn't lend a lot in the way of details. It could be a very plain meatloaf or roast. We may never know.

I was going to give up on making a recipe for this, but it was a little too late. Twitter had put the words "Beef Wellington" into my head, and I was hooked. I've never had it before, but I've always been keen to try it. I mean, come on- beef wrapped in puff pastry? Who wouldn't be excited about that? The more I looked into beef wellington, the more excited I got. There is pâté involved, and mushrooms, and a LOT of butter. I was sold. I had to make this. It makes sense that Elias would have this as an offering. The rest of the food offered to Chise is predictably British- Beef Wellington is classically British. Elias is wealthy- Beef Wellington is a notoriously pretentious, rich-person dish.

The people on Twitter declared it a roast, and so it has become. I decided the only way to tell for sure would be to make Beef Wellington and to compare it to the picture and...well... 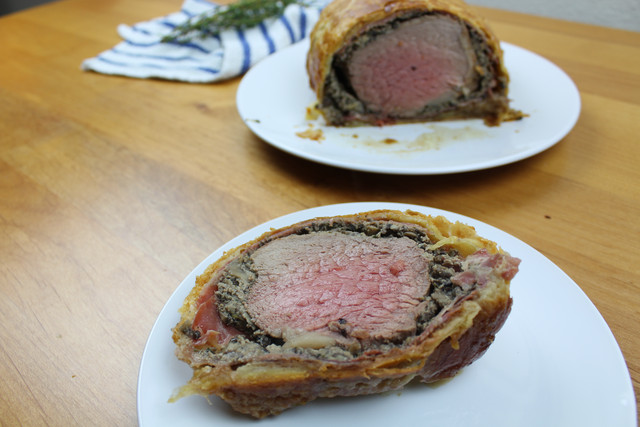 Does it look exactly like the mystery food in the anime? No. Does it taste amazing and was it worth the time it took to make it? Emphatically, yes. If you want to eat something that Chise might have eaten, I think this is a good bet. Furthermore, you will not be disappointed by 1) the overwhelming pretentiousness of this dish and 2) the amazingly delicious flavors.

To start making your own, watch the video below for more instructions!

Ingredients for the Beef Wellington:

To Make the Beef Wellington:

1. Start by pouring the boiling water over the dried porcini mushrooms. Allow to sit, about 30 minutes, while the mushrooms steep. Remove mushrooms from the liquid, and finely chop. Seperate the liquid from any desbris at the bottom of the bowl, and set the liquid aside for use later.

2. In a pan, heat 1 tbsp of butter on high heat. Sear each side of the roast, about 1-2 minutes per side. Set aside to rest on a plate.

3. In the same pan, lower the heat to medium. Melt the rest of the butter, and sautee the grated shallot until fragrant, about 1 minute. Sautee the grated garlic until fragrant, about 30 seconds to 1 minute. Then, tip in the finely chopped porcini and cremini mushrooms. Add in the reserved mushroom stock, and sstir to combine. Flatten out in an even layer on the bottom of the pan and allow to cook down, stiring occasionally, for about 10 minutes or until the mushrooms look dry. Season with salt and pepper, and stir through the thyme. Set aside to cool.

4. In a bowl, stir the pâté with a spatula to help it soften. When the mushrooms are cooled, add them in and stir the two to combine thoroughly. Take some of the mixture and coat the top of your roast in the pâté and mushroom mixture. Set roast and remaining mixture aside.

6. Take out your puff pastry. Sprinkle down some flour, and roll out 1/3 of the sheet so that it is big enough to comfortably sit under the roast. Bake in the oven at 400 F for about 10 minutes, or until golden brown. If you happen to burn it a little, as I did, scrape the burned bits off and it should be fine. Once out, trim the edges so none of the pastry will protrude from under the roast. Set the puff aside until ready to use.

7. As the puff bakes, roll out the remaining 2/3rds of dough until it is large enough to comfortably wrap around the roast. Set aside until ready to use.

8. Take the roast out of the fridge, and wash the outside with beaten egg. This will help the remaining puff pastry stick to the outside. Place roast on top of baked puff- it will crunch it down a bit, this is fine! Then, drape the remaining uncooked pastry around the roast, and tuck the edges under the cooked puff platform. You may need a spatula to do this. When fully wrapped, coat the outside in remaining beaten egg, to produce a shiny exterior.

9. Place roast in the oven at 425 F for 20 minutes, and then lower the heat to 400 for another 25 minutes. When done, take out of the oven and let rest for at least 10 minutes before slicing. And now it's done! Enjoy hot!

BONUS- to reheat any leftovers, simply heat oven to 400. Cut yourself the desired amoutn of slices, and lay them flat on a foil lined baking sheet. Place in oven for about 5 minutes, or until warmed through. Enjoy!

I hope you enjoyed this post! Check in next week for another recipe. To check out more anime food recipes, visit my blog. If you have any questions or comments, leave them below! I recently got a Twitter, so you can follow me at @yumpenguinsnack if you would like, and DEFINITELY feel free to send me food requests! My Tumblr is yumpenguinsnacks.tumblr.com. Find me on Youtube for more video tutorials! Enjoy the food, and if you decide to recreate this dish, show me pics! :D
In case you missed it, check out our last dish: Banana Cocktail from "Love is Like a Cocktail". What other famous anime dishes would you like to see Emily make on COOKING WITH ANIME?
Tags
cooking with anime, ancient magus bride, beef wellington
« Previous Post
Meet the Staff and Cast of Blood Blockade Battlefront & Beyond
Next Post »
"Final Fantasy XV: Pocket Edition" Goes Live with Pre-Registrations
Other Top News
10 Comments
Sort by: