Rating the Wishes of Juni Taisen

Today on Why It Works, let's offer some harsh critiques of the most dearly held wishes of Juni Taisen's warriors! 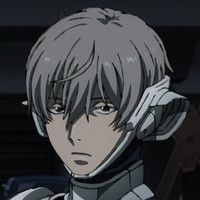 Hello all, and welcome to Why It Works! The Juni Taisen has at last come to a close, with Rat securing both his victory and his desired wish. But Juni Taisen was always more about the characters than the combat, so it came as no surprise that the show’s finale acted as something of a eulogy for this show’s fascinating cast. Rat’s special power gave him the ability to plot out one hundred possible futures, and in at least a few of those futures he ended up asking all his fellow competitors what their victory wishes would be. Some were sad, some were silly, some revised our view of their bearers, and others only confirmed everything we knew. I kinda fell in love with this cast over the course of this series and so today I’d like celebrate their wishes. And what better way to do that than to judge them based on the nature of their heart’s desire? Today on Why It Works, here are my official ratings of the hopes of the zodiac warriors! 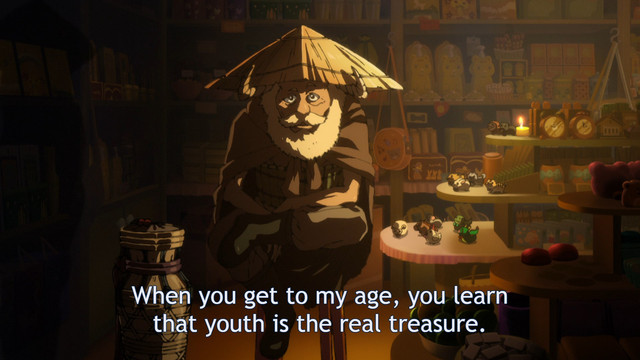 Sheep’s conversation with Rat seems as duplicitous as his theorized conversations with all the other Juni Taisen competitors. Sheep wants to play the part of the feeble old man and, to a teen like Rat, idolizing youth probably seems like it’d be the smart play. The truth Sheep wouldn’t want to reveal is that he has no wish: he has lived a long life, seen his family grow up, and is content with what he has accomplished. Sheep got away. 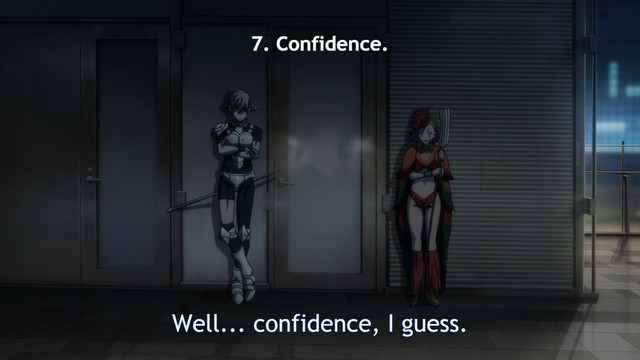 Chicken’s wish reflects the fact that she was never really given a choice in life. Her career as a warrior was prompted by necessity - she was neither born into a noble family like Boar or willingly adopted into one like Sheep, she was simply raised as a tool by others. Chicken understands there is an emptiness inside of her, but all she wishes is to no longer recognize it - for her to truly be able to believe in a life she knows is false. When Rat asks why she doesn’t just wish to not be a warrior, she seems genuinely surprised that that’s even an option. Chicken deserved better than this life and better than this wish.

Wish: A harem, of course! 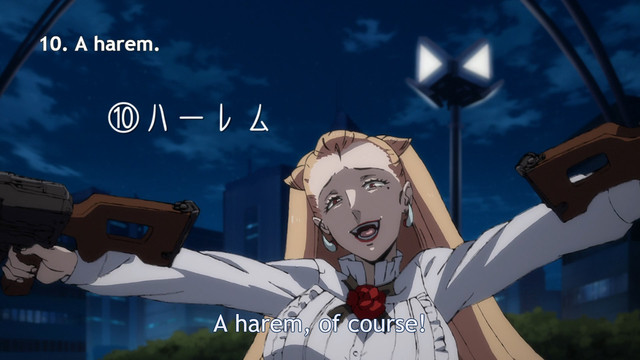 Boar didn’t come into this Juni Taisen looking to make friends or find herself. Boar knows who she is: she grew up in a prestigious warrior house, she’s the best at what she does, and she wants to reap the rewards. Boar’s wish perfectly reflects her self-interest, lack of pretension, and utter satisfaction in being the person she is. You do you, Boar.

Wish: Security for his daughter 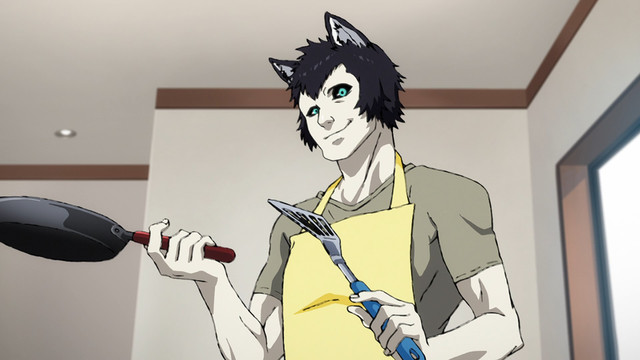 Dog’s wish was one of the truest script-flippers, introducing us to a side of the character we had no reason to suspect existed. Yet, between the direct revision of Dog’s flashback intro and the incredible charm of him being so proud of his breakfast skills, I bought Dog’s true self completely. Dog is a professional and a family man. He may enjoy his work, but at the end of the day, it’s his daughter who brings out that smile. 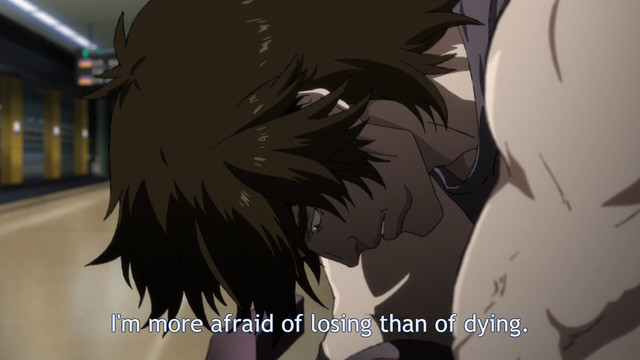 Horse understands that this is an arbitrary world. Strength is distributed unequally, people succeed or fail for reasons outside of their control, and no amount of training can measure up to a genius-level talent. But Horse is a simple man, and thus he wishes not to break this cycle, but to simply be one of its success stories. Like Chicken, Horse is blinded by his worldview; unlike Chicken, the limitations of this worldview are entirely of his own making.

Wish: To be friends with everyone in the world! 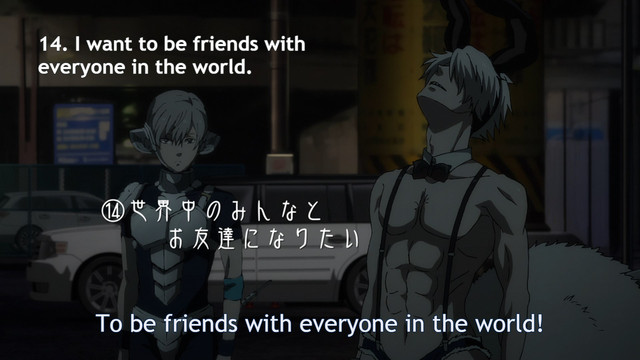 Rat really had to stretch to make Rabbit’s wish seem like anything more worthwhile than his own lack of direction. “Becoming friends with everyone” doesn’t really pass muster after twelve episodes of demonstrating your “friends” tend to be lifeless, moldy, and just as murderous as you. I suppose Rabbit is at least as true to himself as Boar.

Wish: To fight against Ox as equals 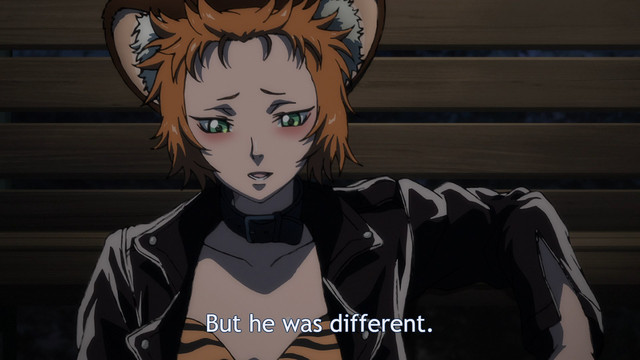 Tiger idolized Ox because he possessed a certainty of righteousness that she could never attain. It likely wouldn’t comfort Tiger to hear this, but her own uncertainty was in itself a positive and noble thing. Tiger’s experience on the battlefield was devastating precisely because she was the kind of person who cared deeply about helping others, about doing the right thing, about improving the world - and for most people, embracing those values means embracing uncertainty, and knowing there is rarely a simple right answer. A better world would have validated Tiger’s nobility, but this one was at least able to grant her wish. 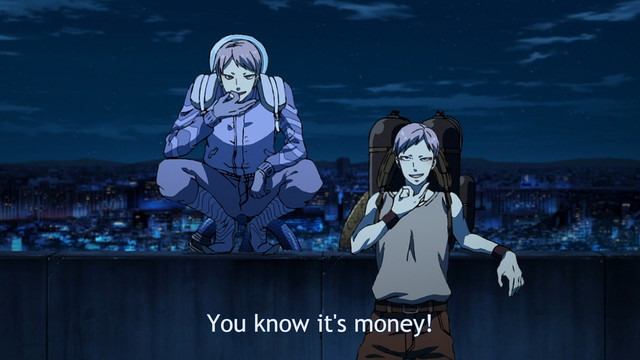 Both Snake and Dragon immediately walk back their wish for money, but only when they’re separated from the other. That fact reflects the nature of their relationship: that even though they overtly crow about competition and the preeminence of money, the only things they really care about are each other. Their rhetoric is the way they affirm that they are on the same wavelength, and if one of them truly reached the end, you can bet anything the other would soon be mocking them for their actual, sentimental wish.

Wish: To save the world 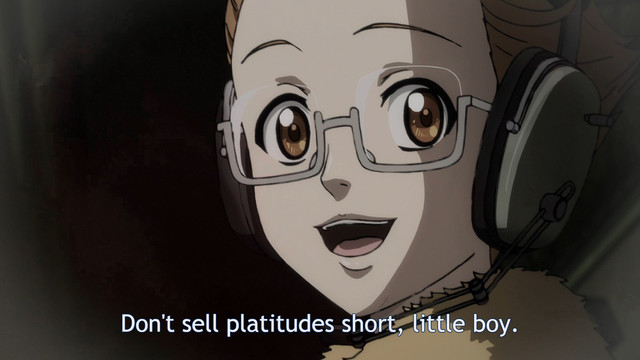 We don’t hear Monkey or Ox directly articulate their wish, but given who they are and how Rat lumps them together, it’s not hard to guess. Both Monkey and Ox are indeed impossible role models to follow - but people like them do exist, and ideals like that are still worth following. Perhaps neither Monkey’s platitudes nor Ox’s righteousness could truly save the world, but it’s only Monkey’s words that save Rat, and only Ox’s righteousness that saves Tiger. Goals need not be attainable to be utterly worth pursuing. 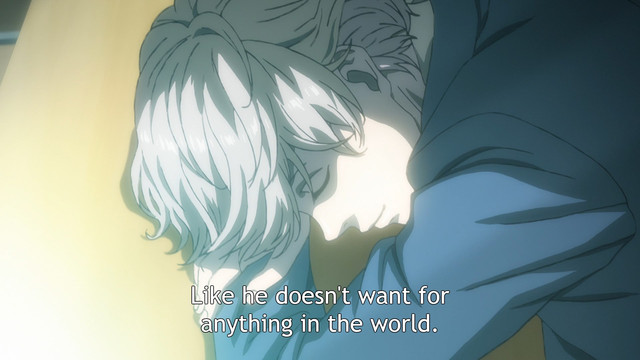 Rat’s power is the curse of knowledge: the ability to know all the possible ways things could turn out, and thus the certainty of knowing things would turn out badly most of the time. Rat’s victory reflects Juni Taisen’s general disdain for war as some kind of righteous crusade; it is not nobility or even necessarily strength that determines victory, but luck, and Rat is the patron saint of luck. Rat is ultimately the troubled, often bitter, constantly uncertain teenager that Monkey pinned him as and, in the end, this avatar of unhappy information only wishes for the absolution of ignorance. Rat’s wish may bring him some comfort, but it feels like it may be the unhappiest wish of all.

Are You Watching Tower of God? Check Out Hime's Recommendations For What to Watch Next