5 Reasons to be Excited for Hakata Tonkotsu Ramens 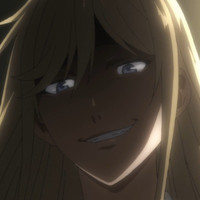 We’ve made it through most of the premieres and its safe to say there’s is a lot of quality anime on tap for this season. One series that stood out to me from first viewing was the oddball crime drama named after the setting’s famous local dish, Hakata Tonkatsu Ramens. It didn’t come into the series with a tremendous pedigree (although its light novel inspiration won an award) or have a hyped production, but it had a sense of personality and intriguing story that separates it from the pack. Here are 5 reasons I’m excited for Hakata Tonkotsu Ramens! 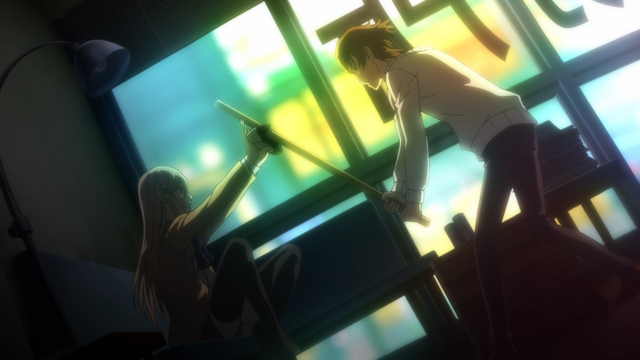 Perhaps one of the greatest inventions of fiction is hitmen who all have a particular style of killing. Where Juni Taisen had individualized methods of killing which generally described their art of combat (or heavily implied who would be winning the tournament), Ramens diversely-equipped cast of killers each seem to have a professional speciality which informs how might fight other characters and has any number of narrative purposes when it comes to identifying, or even framing, each other.

The hulking, half-Russian Ivanov is a described as a master of strangulation, the femme fatale Reiko an expert in poisoning, Shino looks like he specializes in explosives, and the perspective character Xianming uses his propensity for cross-dressing to get close to his victims and make the most of his knife work. With the rapid-fire introduction of these characters, I expect we’ll be running into many more with their own styles, which should make for interesting matchups when things come to a head.

2. Villains you can hate

While Xianming is the hitman that has had any time spent on developing them as a sympathetic individual, we can assume we’ll be learning a bit more about other characters backgrounds as the story progresses. Although their chosen employment isn’t the most endearing trait and comes with an element of danger, safe to say we can expect to feel bad down the line in the highly likely scenario where someone's number comes up.

That said, it’s nice to have around some completely irredeemable punks who you simply can’t wait to meet a messy end. The politician Harada’s son is a prime example both for his propensity for murdering women and assaulting foreigners. There’s nothing special about him, he seems neither smart nor capable, just a rich kid whose dad protects him from the consequences of his actions. His flippant attitude regarding human life sets a moral compass that makes even hitmen seem somewhat respectful. When someone finally wipes the sneer off his face it won't be soon enough. 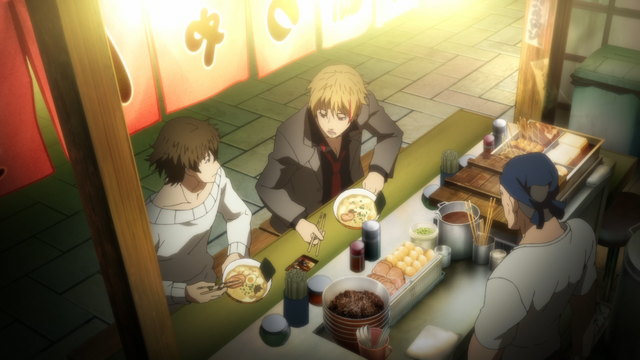 For all its story building and the cold-blooded presentation of its characters, Ramens has an offbeat personality. The name alone shows the series hand when it comes to some of the strange fixations of the series, but it isn’t just noodle soup. A few odd and goofy characters have somehow made their way into the world of killers (although how long they might last remains to be seen) which have added levity to what could be an otherwise clinical story between killers.

The author Chiaki Kisaki may have displayed some personal fixations through the narrative which have carried over to the anime. The title of episode one, “Play Ball”, is just one part of a greater obsession the series, as well as its characters, have with baseball. Without getting into spoilers, the cast definitely has some odd habits which seem to imply you shouldn’t take the story too seriously.

After a whirlwind of character and subplot introductions, we leave off episode one with a double cliffhanger and the seeds of future intrigue. The trailer and style of Ramens pointed to a multi-perspective, urban fantasy style of storytelling that, along with the previously described quirky characterization, felt reminiscent of Durarara!!

The many characters of different styles and walks of life each, in some way, associated with Murder Inc has the same greater-picture feel. This energetic style and abundance of characters which was so fun in Durarara!! has proven to have the same appeal in a darker story involving killers from the similar directorial style of the American film Smokin’ Aces and it’s gotten off to a good start.

Apparently, the authors also agree that Durarara!! and Hakata Tonkotsu Ramens have something in common, since there has already been a crossover light novel in which Banba and Xianming visit Ikebukuro, the haunt of the characters of Durarara!!, to watch a baseball game and end up forced to take local odd jobs after they’re left penniless. With Ramens gaining enough popularity to receive its own anime, perhaps we’ll see a translation of the one-shot crossover, or even an OVA?

Hakata Tonskotsu Ramens looks to be a smart, surprisingly quirky crime drama looking into the intrigue that takes place in the world of professional killers. If that doesn’t make you excited, then check out the trailer or watch episode 1 and see how you feel!

What did you think of the first episode? Are you excited about Hakata Tonkotsu Ramens?