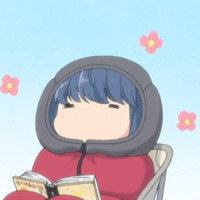 Hey all, and welcome to Why It Works. We’re a couple weeks into the winter season now, meaning most shows are starting to settle into themselves and find their comfortable neutrals. As I said last week, “comfy” seems to be the name of the game this season – we are awash in comfy, cozy slice-of-lifes and low-key character dramas, offering plenty of diverse warm antidotes to these cold winter months. But one show in particular is finding comfort in a place I never expected – the brisk, wide-open winter outdoors. So today on Why It Works, let’s explore how Laid-Back Camp finds coziness in the bustle and beauty of camping out. One of the most distinctive qualities Laid-Back Camp possesses as a slice-of-life is its wide-open framing. The coziness that is inherently associated with slice-of-lifes tends to flourish in quiet, personal spaces; but in Laid-Back Camp, many of the most relaxing scenes take place in overwhelmingly open vistas. This is not the most common way narratives use space; in fact, generally when you put a character in an overwhelmingly large space, it’s intended to emphasize something like their isolation or lack of direction (a trick this season’s A Place Further Than the Universe uses to great effect). So how does Laid-Back Camp use its massive outdoor spaces to an opposite effect?

Part of this comes down to the characters’ relationship with that space, with Rin in particular establishing a knowing, comfortable relationship with the great outdoors. The show’s first episode uses silence and methodical physical activity to put us directly in Rin’s position, letting her own comfort in the outside act as our emotional guide. The long sequences dedicated to Rin setting up camp certainly aren’t wasted time – they are key to what camping means in an emotional sense, and do a great job of making us feel at home in this environment. The comfort of camping is partially found in going through specific mechanical motions you’ve performed a million times before, all on your way to setting up a tiny personal home away from home. Laid-Back Camp prioritizing Rin’s setup simultaneously creates a sense of general repetitive calm and also emphasizes her own comfort in this environment, allowing us to feel more at home alongside her. 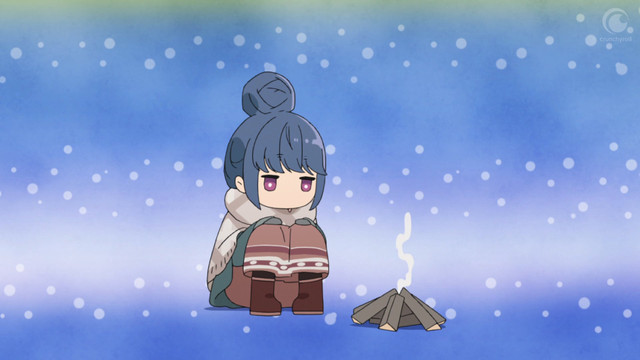 It also helps that the show’s portrait of the outdoors, and in particular its color work, are so consistently inviting. Laid-Back Camp’s mix of bright blue skies and warm autumnal forests convey a sense of austere agreeability; it’s clear that it’s cold out, but we can tell the brisk air is refreshing, the forests surrounding Rin seeming far more friendly than imposing. Forests aren’t presented as full of secrets; they’re transparent and cozy, alternately portrayed as a mass of mellow colors or a perfectly traversable backyard.

“The outdoors is just one big friendly backyard” is an effect Laid-Back Camp works to bolster in a variety of ways. The closeness of comfort is key here; though Rin is going camping, it’s always clear that she’s not all that far from civilization, and camping often seems almost interchangeable with visiting a local farm. Along with the relative reachability of her campsites so far, Laid-Back Camp also uses on-screen text messages to both strengthen our individual impressions of these characters and also undercut any sense of isolation that camping might provide. I imagine as the show pulls its cast together more, it might eventually forego both the local campsites and the text messages; after all, these tools are in large part chosen to address a tonal problem that having all your friends together on the trip would also solve. 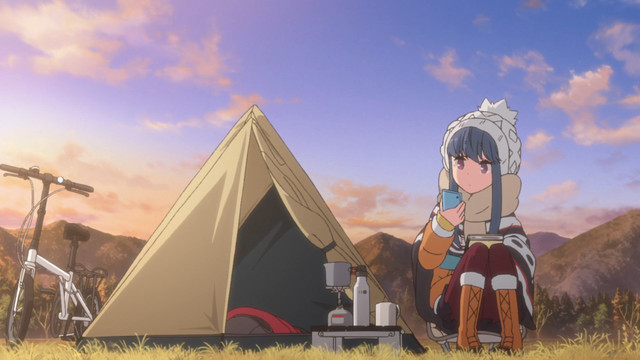 Finally, one of Laid-Back Camp’s cleverest tricks is its choice to make its indoor spaces less cozy. Slice-of-life shows often tend to frame their protagonists’ school club rooms as incredibly warm and inviting places, which makes sense – after all, that’s the location they’re intending us to fall in love with and feel comfortable visiting. In contrast, Laid-Back Camp saddles its leads with a club space that is outrageously, stiflingly small, using its school geography to physically push the leads outside. Scenes taking place in the club room feel so cramped that when the leads return to the outdoors, it feels like an immediate relief, further emphasizing the sense that even these massive spaces can be a comfortable home.

There are plenty of other ways Laid-Back Camp makes camping cozy, from its diverse and well-chosen soundtrack to its very snappy comedy. All in all, the show is doing a wonderful job of making camping feel charming and approachable, to the point where even a resolute shut-in like me is feeling tempted to invest in a tent. I hope you’re enjoying Laid-Back Camp, and please let me know what else about the show you're loving in the comments!

Tags
why it works, laid-back camp
« Previous Post
"Dragon Ball FighterZ" Footage Shows Android 21 in Majin Mode
Next Post »
"My Hero Academia" Game Puts All Might and Others in the Screenshot Spotlight
Other Top News
5 Comments
Sort by: